Even as the global pandemic grinds on, Apple continues minting money at a feverish pace. Reporting on its Q3 2021 financial results, the company has announced profits of $21.7 billion ($1.30 per diluted share) on revenues of $81.4 billion. Its revenues were up 36% compared to the year-ago quarter, with profits up an immodest 93% (see Apple Q3 2020 Breaks Records While the World Burns, Next iPhone to Be Fashionably Late, 30 July 2020). Apple reported all-time records in every geographic sector in which it does business and significant gains in every product category it reports; the phrase “all-time high” kept recurring in CFO Luca Maestri’s description of the quarter’s results. Ted Lasso doesn’t have to work very hard to “Believe” with results like these. 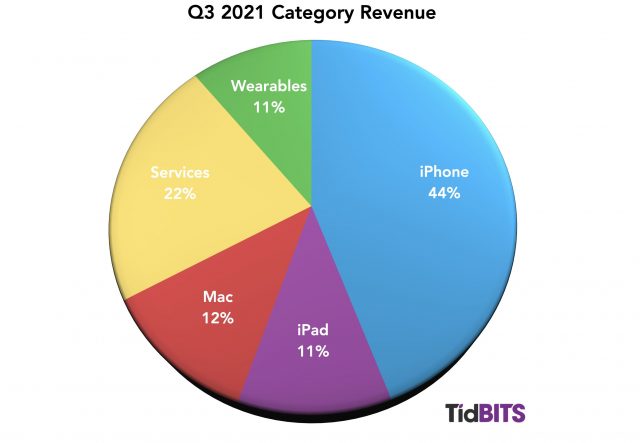 Apple CEO Tim Cook said Q3 2021 marked a new revenue record for the June quarter. He described a growing sense of optimism among the American public, boding well for future results, but he cautioned that a new wave of COVID-19 infections caused by the Delta variant could be a setback. In addition, he expressed some concern that foreign exchange rates and supply constraints could also slow future revenue growth. Offsetting those worries are signs of healthy growth in emerging markets, such as Brazil, Chile, Mexico, Poland, India, Thailand, and Vietnam.

Q3 iPhone revenues shot up an impressive 49.8% year over year, from $26.4 billion in Q3 2020 to $39.6 billion this quarter. iPhone upgrade revenues achieved (here’s that phrase again) an all-time high for the June quarter. Cook noted that the introduction of 5G capability helped spur the demand for new iPhones and went on to say that 5G adoption worldwide is still in its early stages, auguring well for the product line in future quarters (see “Understanding 5G, and Why It’s the Future (Not Present) for Mobile Communications,” 11 November 2020). 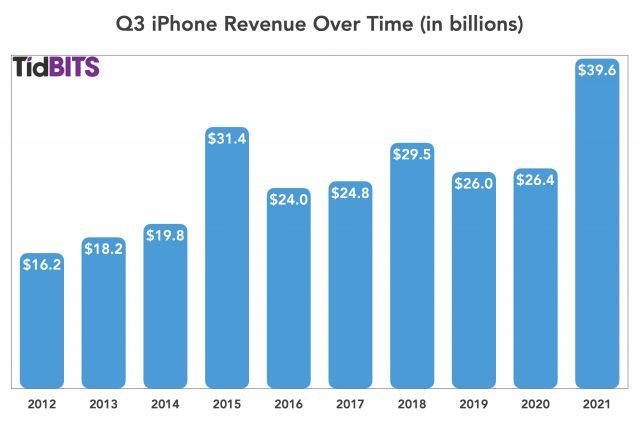 The iPad brought in $7.4 billion in revenue, handily beating the $6.6 billion it brought in a year ago, an increase of 11.9%. You would have to go back to 2012 to find the sole June quarter in which iPads brought in more revenue than this year. With new iPads introduced only recently (including a high-end iPad Pro that shares the same M1 chip as the latest Macs) and with more on the way, coupled with the possibility of continuing pandemic-related lockdowns that could spur continuing demand for the devices for remote work, the iPad’s financial future looks rosy. 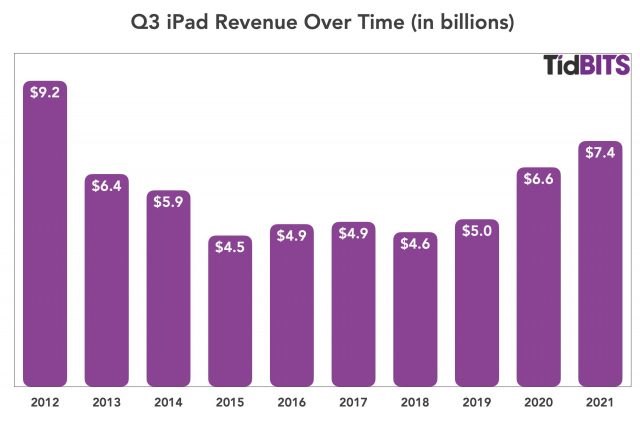 Apple’s Mac products also exhibited strong growth, with a year-over-year increase of about 16%, from $7.1 billion in revenue in Q3 2020 to $8.2 billion this quarter. Cook said this was a new Q3 record for the Mac, thanks to the new M1-based iMac.

“It is remarkable that the past four quarters for Mac have been its best quarters ever,” said CFO Luca Maestri. Maestri later added that the combined sales of the iPad and Mac equals the size of a Fortune 50 company, and customer satisfaction for both is over 90%. Maestri also noted a significant uptick in the adoption of the MacBook Air among corporate customers—given that the M1-based MacBook Pro doesn’t have much over the M1-based MacBook Air, we’re not surprised. 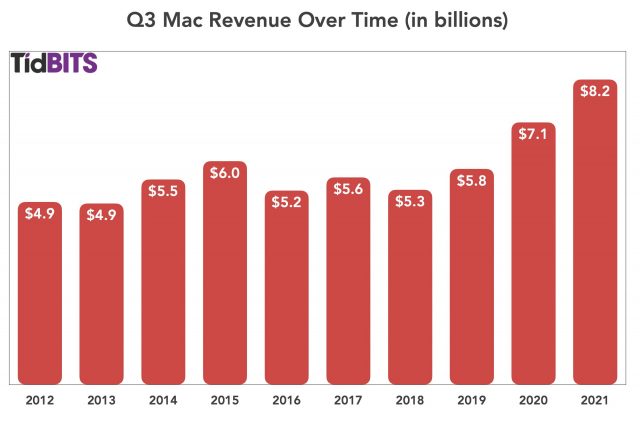 Services experienced an impressive 32.9% year-over-year increase in revenue with $17.5 billion in revenue this quarter compared to $13.2 billion in the year-ago quarter. Cook said this was an all-time Services record, and he dropped in a mention of Apple TV+ and its 35 Emmy nominations as one contributor to the category’s success. In fact, many Apple services broke revenue records, either quarterly or all-time, including AppleCare, Apple Music, and the App Store.

Maestri boasted that the various Apple services now have more than 700 million paid subscriptions, up 150 million from last year. He credited much of the growth in this category to entertainment-hungry customers during the pandemic lockdowns. 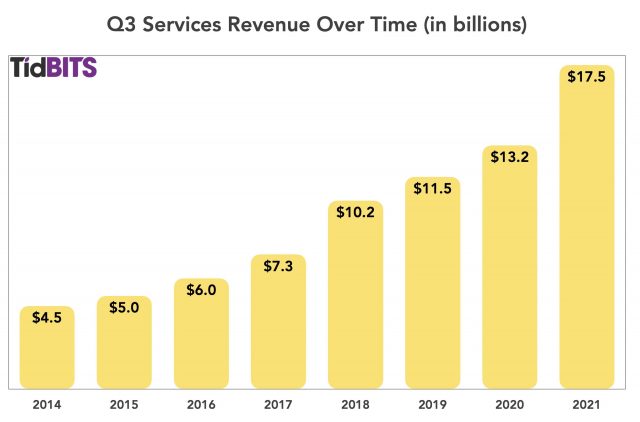 The Wearables category revenue increase was even larger than Services, up about 36% over the category’s year-ago quarterly results. The Apple Watch, AirPods, and other wearables brought in $6.5 billion a year ago and $8.8 billion this quarter. Cook said this was a new Q3 record for Wearables, which also includes accessories like the new AirTag. With a new model of the Apple Watch on deck later this year, this category is likely to continue its upward revenue trajectory. 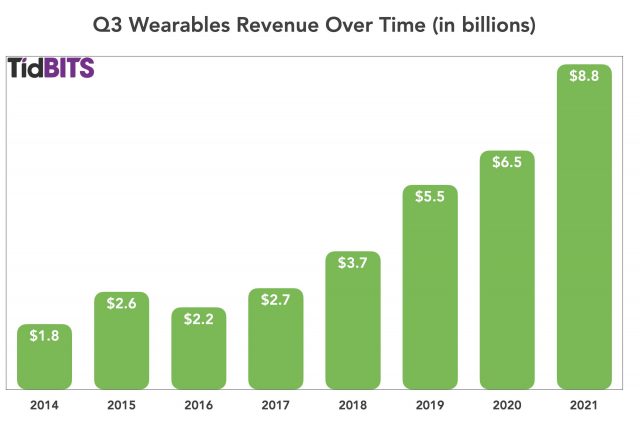 Apple saw impressive year-over-year growth in all five of its regions and set a new June record for Greater China, thanks largely to the iPhone 12:

Add in the previously mentioned signs of growth in its emerging markets, and Apple should continue to post healthy worldwide revenues in the months ahead. 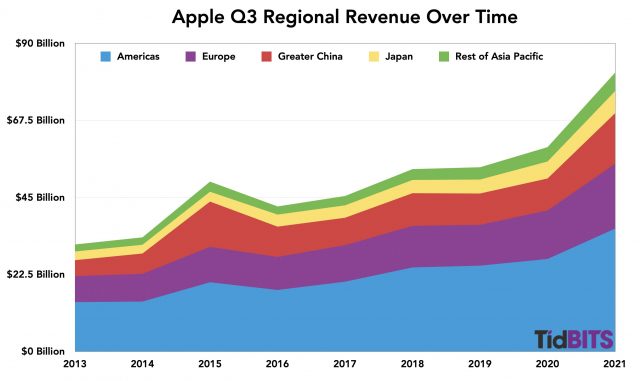 Apple is trying to remain optimistic, and certainly, the company has no reason to be pessimistic—at least about its own health: Apple is shattering records and has $194 billion in the bank. But the specter of COVID-19 loomed large over this quarter’s investment call.

In a slight return to normalcy, Maestri offered guidance for the September quarter, something Apple has not done since the beginning of the pandemic. Apple expects double-digit revenue growth in the next quarter, but less growth than in Q3 due in part to the impact of foreign exchanges. Services growth will also appear slower because Q3 2020’s lockdowns made for greater contrast with this quarter. Finally, the most alarming harbingers of future revenue slowdowns brought up during the conference call were anticipated supply constraints.

Cook said of the supply constraints:

The majority of the constraints are of the variety that others are seeing. I would classify it as industry shortage. We do have some shortages in addition to that where the demand has been so great and so beyond our own expectation that it’s difficult to get the entire set of parts within the lead times that we try to get those. It’s a little bit of that as well. As I said before, the latest nodes, which we use in several of our products, have not been as much of an issue. The legacy nodes are where the supply constraints have been, on silicon.

In plain English, the chip shortage that’s affecting the entire supply chain is looming over Apple. While Apple said it was able to mitigate those issues in Q3, it’s looking less likely in Q4. But if anyone is up to the task of working through a supply chain hiccup, it’s Apple CEO Tim Cook, who, despite whatever shortcomings he may have, is a proven master of supply line management.