At Apple’s “California Streaming” event, the company unexpectedly announced an incremental upgrade to its base-model iPad and unveiled a redesigned iPad mini. Both are available to order now and will ship on 24 September 2021.

The iPad mini is small and apparently easily overlooked. Apple last updated it in March 2019, and that upgrade replaced the model previously released in September 2015. So the iPad mini was long overdue for an update, but what an update it has received!

In short, Apple has turned the sixth-generation iPad mini into a diminutive version of the iPad Air, with the same squared-off industrial design and modern specs. Prices start at $499 for 64 GB of storage, with an upgrade to 256 GB for $649. That may seem high compared to the $329 starting price for the iPad, but the fifth-generation iPad mini started at $529, and that was with an old industrial design (“Apple Quietly Releases New iPad mini and iPad Air,” 18 March 2019). If you want 5G cellular connectivity, add $150 to the price, making it $649 for 64 GB and $799 for 256 GB. The new iPad mini comes in space gray, pink, purple, and starlight, which is a sort of silvery gold. 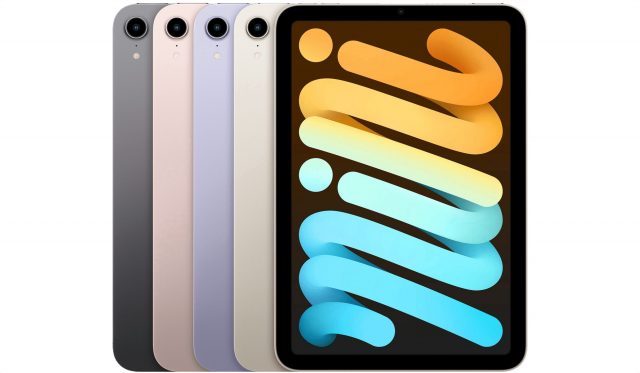 Here are the key specs of the sixth-generation iPad mini:

There’s one notable missing feature: the Smart Connector, which lets iPads directly connect to keyboards and cases. That means you’re limited to Bluetooth keyboards, which don’t provide as coherent an experience. It’s not too surprising, given that Apple would have to create keyboards and cases purely for the iPad mini form factor, and it might not sell in sufficient quantities for that to be worthwhile. Plus, an attached keyboard would have to be tiny. 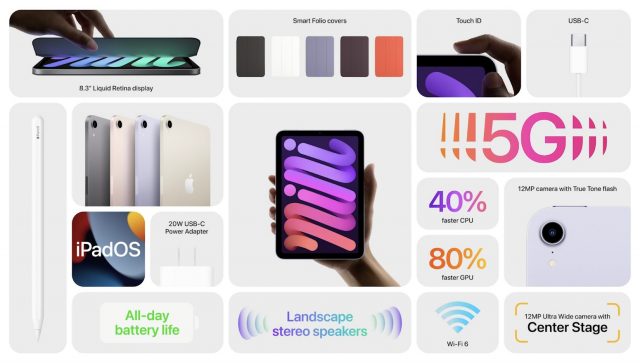 While the iPad mini lacks a Smart Connector for keyboards, it does offer a magnetic attachment for Apple’s Smart Folio, which costs $59 and comes in five colors: black, white, English lavender, dark cherry, and electric orange.

Overall, the sixth-generation iPad mini is a decent buy at $499, particularly for someone who wants a small iPad above all else and doesn’t want a tiny keyboard attached. I’d like to see a cheaper iPad mini focused on reading, but I doubt that’ll ever happen. 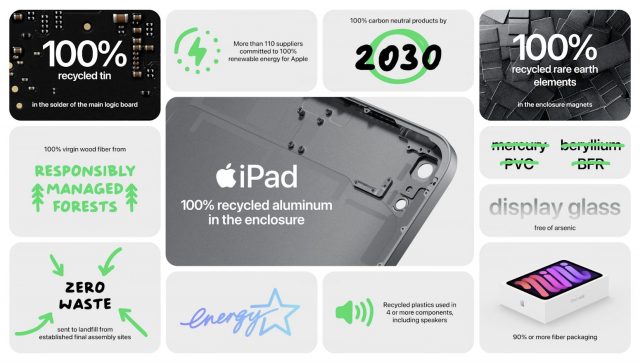 Apple favored the base-model iPad with yet another update, keeping it fresh while retaining its bargain-basement $329 price. On the outside, there’s nothing new in this ninth-generation iPad: it still has a Home button for Touch ID and still works with the first-generation Apple Pencil. But it picked up a couple of tricks from the iPad Pro:

The ninth-generation iPad is powered by the A13 Bionic chip, the same chip in the iPhone 11 series and a generation newer than the A12 Bionic in the previous model. It may not compete with the A15 Bionic in the iPad mini, but it’s plenty powerful and helps keep the price down.

The ninth-generation iPad also comes with double the storage of the previous model, starting at 64 GB. A 256 GB configuration is available for $479. Add $130 if you want 4G LTE cellular connectivity, making the price $459 for 64 GB or $609 for 256 GB. It’s available in space gray and silver.

Particularly with these upgrades, the base-model iPad remains one of Apple’s best values, and it’s all the iPad most people need.

Comments About Apple Redesigns the iPad mini, Upgrades the iPad