In a situation that may be familiar to many TidBITS readers, I’ve recently found myself providing technical assistance to an elderly neighbor—call her Beverly. I suspect that she’s in her 80s, and while she claims otherwise, everything I’ve observed suggests that she’s plenty sharp mentally. What she’s not, however, is expert in the use of her Apple devices: an iPhone 12, a 12-inch iPad Pro, and an Apple Watch Series 6. And she does lose things—on my second visit a few weeks ago, I helped her order a new sport loop-style Apple Watch band so she would be less likely to take the watch off and forget where she’d put it. At the time, I didn’t realize this might be a trend.

Nevertheless, it’s rewarding to help her solve problems and show her what her gear can do for her, partly because doing so gives me insight into places where Apple’s interfaces are confusing or overwhelming for someone like her. And because she thanks me with pie. You can’t go wrong with pie.

Beverly called me Monday in a panic. Over the weekend, she had been at a dog obedience competition with her poodles on the other side of the state, staying overnight at a small hotel. When she got home, she couldn’t find her iPad Pro anywhere, so she assumed that she had left it in the hotel. When she called the hotel, the people at the desk weren’t helpful or reassuring. Hence her phone call to me.

Most of the time, when someone calls me with a problem, they’re overreacting, but there were two facts about her iPad that caused me to worry for real. I hadn’t previously internalized that she traveled with it or I would have said something on my previous visit.

In other words, she had left behind a device that could be unlocked trivially, along with a list of all her important passwords. The whole situation screamed, “Hack me!” Even worse, when I asked, she said that yes, her email address was also written on that piece of paper. My heart fell. I was going to have to help her erase her iPad remotely and change passwords to all the accounts she could remember.

Monday was already shaping up to be an insanely busy day for me, so I asked her to come over. After she arrived, I opened the Find My app on her iPhone and tapped Devices at the bottom. It listed two iPads, and she said one was an older model that her husband used. It was showing up at her house, as it should.

The other iPad, though, the one we thought might have been near Buffalo, listed my address as its location. It took me a few seconds to realize what that meant since I was expecting either “No location found” or a spot somewhere on the western side of New York State. “Find My says it’s here at my house,” I told her. “Could you have lost it in the car?” I tapped Find My’s Play Sound button but was told that the sound would play once the iPad connected next—had we been at her house instead of mine, it might have worked.

So we rushed outside and tore her big SUV apart, looking under the dog rugs and usual detritus that accumulates in a rural vehicle. Nothing. I had searched the passenger side, and she’d looked on the driver side, but just to be complete, I suggested we switch sides so each had a fresh pair of eyes. Meanwhile, I was telling her about how we’d once lost a Garmin Forerunner watch for weeks between the front seat and center console in our Subaru Outback and how our son Tristan’s Apple Watch had similarly disappeared earlier in the year. And then, lo and behold, when I leaned far enough over the driver’s seat and peered down into those cracks, I saw the edge of the iPad case.

You can imagine her relief at not having to replace the iPad Pro, change passwords, and worry about online identity theft. (And my relief at not having to help her with all that on what was turning into one of those days.) It was a huge win for Find My, and the first time I’ve had the opportunity to use it to recover a truly missing item.

In fact, my previous usage of Find My was a complete fail. In July, Tristan had borrowed our Subaru to go camping with friends at a state park in Pennsylvania. For complicated reasons involving not enough charging cables among young adults with too many devices, he had removed his Apple Watch at some point on the way home. He realized this a day after returning the Subaru, so he asked us to look in the car.

Since he’s in our Family Sharing group, I could also see that Find My thought his watch was still somewhere in Pennsylvania, although he was sure he’d had it after packing up the car. Rooting through the car did indeed uncover it on the floor outside of the driver’s seat, but even though it had power, it refused to update its location with Find My until he unlocked it. That seems to be missing the point, and it certainly should have known about our Wi-Fi network. 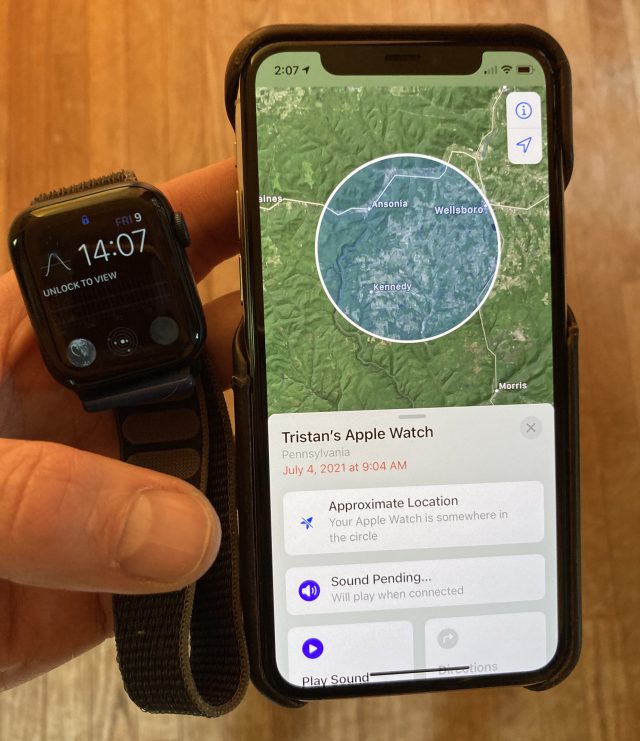 Needless to say, I sent Beverly home with instructions to change her passcode to something reasonable and to store her password list deep within a file cabinet. I also turned on iCloud Keychain on her iPhone and iPad so stored passwords would sync. I hope that will, over time, ensure that she doesn’t need to refer to the password list.

I didn’t have time that day to get her started with upgrading to iOS 15, iPadOS 15, and watchOS 8, but I’m planning to do that soon. The reason is a welcome new feature of Find My—Notify When Left Behind. I first tried it with my AirPods Pro (see “Apple Updates AirPods Pro and AirPods Max to Support Find My,” 6 October 2021), and it worked like a charm, alerting me that I’d left home without them later that day (I had to override the default so it would notice that I’d left the AirPods at home).

Two days later, we went out again, and again I got a notification that I’d left devices behind. Of course, leaving devices at home isn’t generally a problem, so I reset that option. However, several times when I’ve gone running since, I’ve gotten a notification on my Apple Watch that I’ve left my iPhone behind—absolutely true since I always leave it in the car. 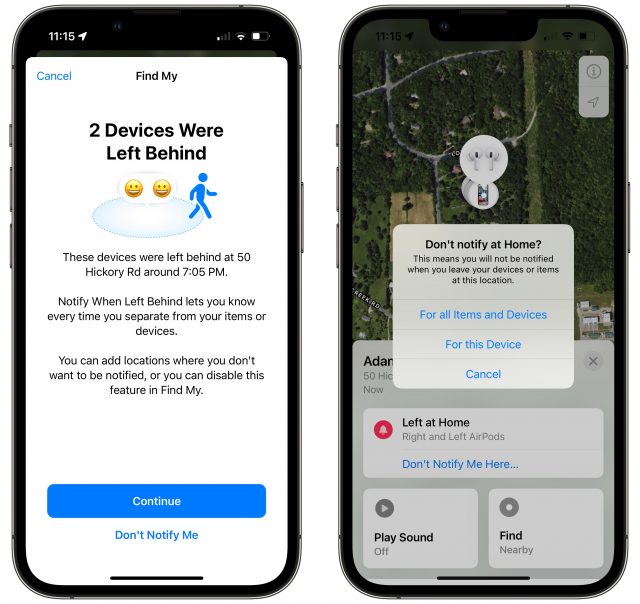 I suspect that the Notify When Left Behind feature may not be completely reliable, but if it helps even some of the time, it’s worth using. It wouldn’t have helped Beverly because she didn’t actually leave her iPad behind, but if she had done so, her iPhone and Apple Watch would have alerted her before she’d gone far. That might happen next time.

Amusingly, in the excitement of finding her iPad Pro, she accidentally left her purse hanging on our dining room chair. I sent her an email suggesting that perhaps an AirTag should be in her future. Regardless, I suspect there will be more pie in mine.

Comments About The Case of the Missing iPad Pro: Find My for the Win