A few months ago, I wrote about a quirky, sporadic problem that readers would report to us on occasion (see “LittleBITS: TidBITS Formatting Bug, Ransomware Protections, More OCR in Images,” 15 November 2021). For these readers, an article in the TidBITS issue would occasionally be formatted as a column of text that’s a single character wide. I tracked down the cause of each problem to corruption in the CSS styling for the issue that caused style="padding: 0.25em" to change to something like style="padding:25em". That corruption transformed a slight indent into a massive one. 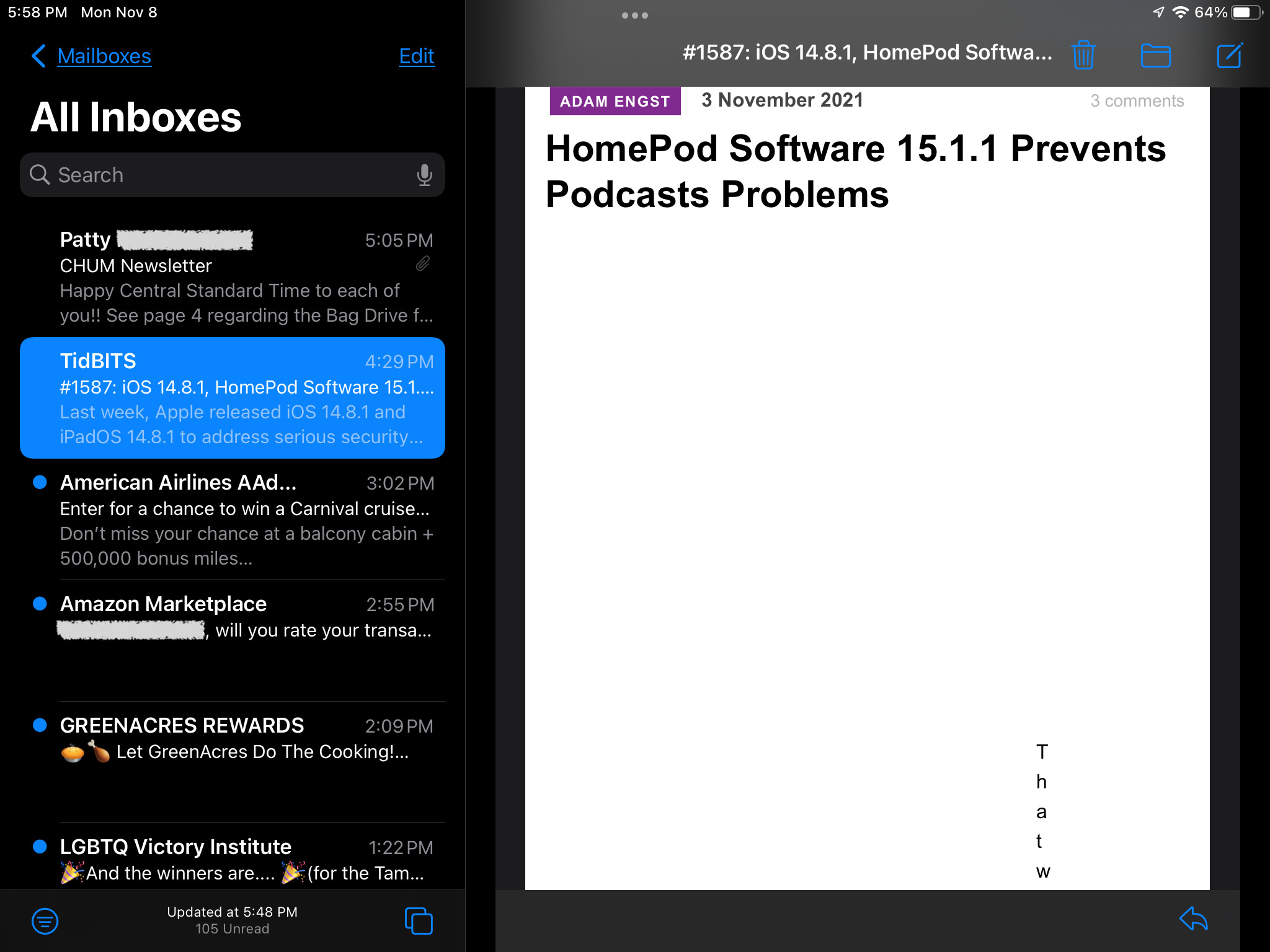 If the problem had happened once, I could have chalked it up to a communications error somewhere along the way. But it was happening to multiple users, and some of them saw it multiple times, so there had to be some other commonality.

Our support whiz Lauri Reinhardt and I received reports from multiple ISPs, but upon closer examination, they weren’t as separate as they might have seemed. That’s because Verizon bought AOL in 2015 and acquired Yahoo in 2017. At some point, Verizon transitioned both aol.com and verizon.net email accounts to the Yahoo Mail backend. (Yahoo and AOL were acquired by Apollo Global Management in May 2021 and are no longer part of Verizon.) At some point, Frontier Communications also entered into a partnership with Yahoo for its email, adding its primary frontier.com and frontiernet.net domains to the list of those that rely on Yahoo Mail behind the scenes, along with earlier domains like citlink.net, ctaz.com, ctaz.net, and newnorth.net.

That was the first piece of the puzzle, but we have over 2100 subscribers from those domains plus yahoo.com, so if that’s all there was to it, we would undoubtedly be receiving more reports of the problem. After some back and forth with the people who reported the error, I figured out the remaining piece of the puzzle—they all used POP to download their email from the server. The vast majority of Internet email app users rely on the server-focused IMAP protocol for accessing email because it makes working on multiple devices much easier, but POP remains available at many ISPs.

TidBITS reader Bill Gruber provided a possible explanation. He had encountered a similar problem with periods disappearing and discovered that a line that contains just a period would terminate the transaction. (I can’t quickly parse POP3’s RFC 1939, but there is mention of CRLF.CRLF terminating a multi-line response.) Bill found that some ISPs were incorrectly stripping leading periods from a wrapped line, presumably to protect against an inadvertent termination. So if a line were broken such that it started with a period, the ISP would strip that period. The problem was impossible to reproduce because email headers are of random lengths, so the point where a line would be wrapped could change on every send. Needless to say, removing periods can play havoc with formatting, as we experienced, and Bill pointed out that it could be problematic in other ways, such as changing an instruction to administer .25 ml of medicine to 25 ml.

If POP were widely used and if it was easy to connect with Yahoo Mail support, I would report this bug. (Here’s an example of the difficulty of connecting with Yahoo support. Earlier this week, an acquaintance’s email account was compromised, and the attacker sent me multiple emails trying to fool me into sending him an Amazon gift card. After the first message, he tried to redirect our conversation to a similar-looking Yahoo account that wasn’t controlled by my acquaintance. After alerting my acquaintance to the attack via a text message, I looked for some way to report this obvious abuse to Yahoo but could find no appropriate support channel.)

Instead, for those who experience this problem, I suggest you switch to IMAP. If that’s not something you wish to do for technical or philosophical reasons, you can read TidBITS articles that get corrupted in email on our website instead—just click the article title in the issue to load it in your browser.