When the COVID-19 pandemic hit in 2020 and going to a gym became unthinkable, I thought about buying a Peloton stationary bike as so many others sequestering themselves at home were doing at the time—but I quickly reconsidered.

Peloton’s premium spin cycles are expensive. They’ve come down in price a bit lately as the company has been battered by shifting market conditions—such as fitness buffs returning to their health clubs—but they still cost $1500 to nearly $2500.

Besides, I was and remain offended at how Peloton locks its customers into a proprietary ecosystem. If you want to take a spin class on the bike’s big, beautiful screen, it has to be a Peloton class—and you pay a monthly fee in perpetuity for that, in addition to the hardware cost.

As someone who already uses a bunch of Apple-compatible exercise apps, I want a stationary bike that is flexible enough to integrate with those workouts. Moreover, I want a smart bike with no built-in screen, just a holder for an iPad or iPhone, so I can link the fitness apps to the bike via Bluetooth and then use the Apple device as the bike console while exercising.

Bowflex’s C6 Bike fits into such a role (as does its near-identical sibling, Schwinn’s IC4 Indoor Cycling Bike; the products share a parent company, Nautilus). At $799, the C6 Bike is much more affordable than a Peloton—especially if you consider that a one-year membership to Nautilus’s JRNY exercise service (a $149 value) is included in that cost. 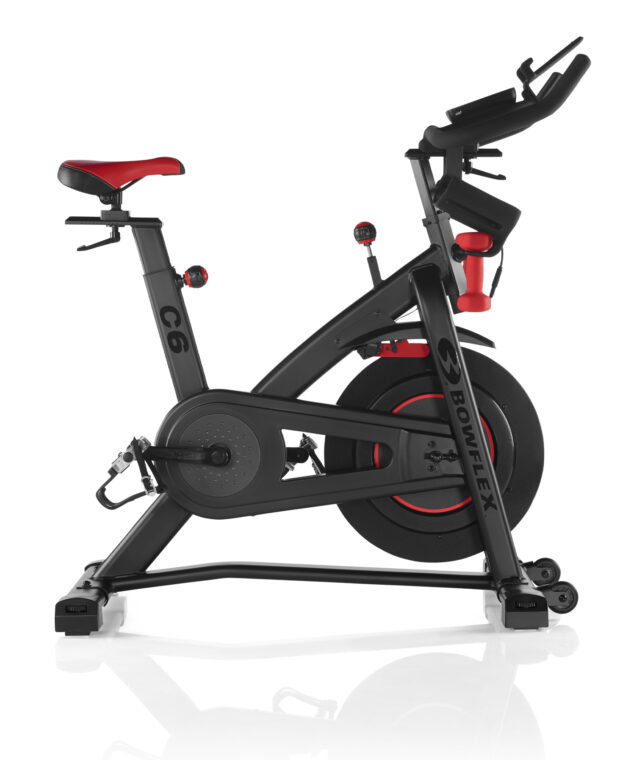 Most important to me, the C6 Bike is a generic platform upon which I can hang a range of fitness services—including Zwift, Kinetic Fit, and even Peloton—via their apps. This does not always transpire flawlessly—there’s something to be said for integrated systems such as Peloton’s—but I prefer the freedom and variety the C6 Bike provides.

The C6 Bike will be instantly familiar to spin cyclists. All the usual hardware bells and whistles are there:

The C6 Bike ships to buyers in pieces, unsurprisingly. Assembly is not rocket science, but expect some pain as you heave this beast (weighing in at 330 pounds or 150 kilograms) into position. I had to haul the C6 up to the gym area of my attic with my son’s help—and let’s just say that graphically descriptive words were uttered.

Once assembled, you plug the C6 Bike into power. That activates a basic display for those who don’t want to muck about with fitness apps and services. The console shows data such as workout duration, calories expended, speed, distance, wheel resistance level, and revolutions per minute.

If you have a heart-rate monitor, such as wrist or chest monitors sold by the likes of Wahoo, push the Bluetooth button on the bike console to set a heart icon flashing and pair the monitor with the C6 Bike. I’m told a heart-rate monitor is normally included, but my review unit didn’t come with one.

I spent little time with the C6 Bike’s basic console because I had grander ambitions—starting with the Zwift service, my go-to for indoor cycling.

As I noted in “Zwift Transforms Stationary Bicycling into a Shared Virtual Experience” (1 July 2020), Zwift is a boon for those cycling in place within their homes because it turns dreary workouts into a game-like fitness experience.

With the Zwift app running on a Mac, Apple TV, or iOS device, and a Bluetooth connection to smart bike hardware established, you can see a virtual version of yourself in exotic locales—like London, a futuristic version of New York, the fictional realm of Watopia, or the Japanese-influenced Makuri Islands. As you pedal, your avatar pedals. You can even meet virtually with your biking pals and trash talk each other on voice-chat apps while pedaling past dinosaurs and volcanoes in this cartoon-like universe. 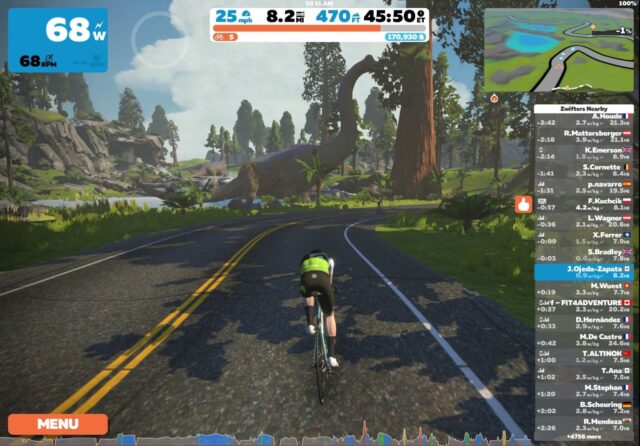 The Zwift setups described in my earlier article consist of traditional bikes mounted on “trainers”—stands that elevate the bikes’ back wheels and hold them against heavy resistance rollers. Smart versions of such trainers connect to Apple gear via Bluetooth to enable Zwift workouts. Or, if you use a dumb trainer, you can connect sensors to your bike and person, and then link those to Zwift.

Using the C6 Bike is much less of a hassle. There’s no bike mounting, adjusting, and calibrating, as with trainers. You just launch Zwift on your Apple device, push the Bluetooth button on the C6’s panel, pause for Zwift to detect it as a data source, pick a ride, and start pedaling. Zwift purists might dislike that the C6 doesn’t look and feel like a road bike, which is what the service emulates, but I didn’t mind. 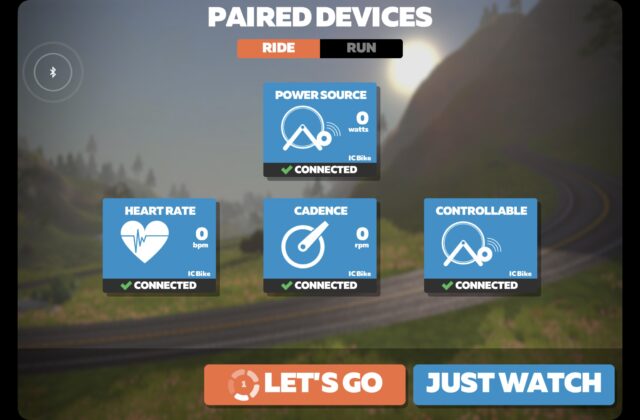 After linking to the C6 Bike, Zwift measures cadence (pedaling rate) and, supposedly, heart rate. The latter metric perplexes me since it is not connected to a heart-rate sensor attached to my wrist or chest. So how does it get data? You do have the option to use your standalone heart-rate sensor with Zwift.

You should be aware of a major limitation when using Zwift with the C6 Bike: it is not a “controllable” bike. This refers to a stationary bike or trainer that is smart enough to ratchet up physical resistance when virtually going uphill in Zwift and ease up on the tension on the downhill. Zwift controls how the ride feels, hence the term.

Here is the confusing part: Zwift detects the C6 Bike as controllable during Bluetooth pairing, which appears to be meaningless since the user derives no benefit from this designation that I can see.

Variable tension makes Zwift more realistic, so I missed it when using the C6 Bike. You can use the knob to increase or decrease resistance manually as you come upon hilly terrain in Zwift, but it’s not the same.

I had another problem when using the C6 Bike with Zwift: the bike overestimated how fast I was going and, therefore, how much territory I covered in a particular period of time. An hour-long ride that should have come in at about 12 to 15 miles, similar to my outdoor biking, was revised upwards to about 20 or 25 miles. (I’m good, but not that good.) Mathematically taking this into account on ride after ride was a hassle. And, since I upload data to Strava, an online service that documents all my cycling activity for posterity, the C6 makes me look like a cheater. As I write this, I’m unclear whether this is a Bowflex or Zwift issue; I’ll post in the comments below if and when I learn more.

Yes, you can do Peloton rides without a Peloton bike. Just load the Peloton app on an iOS device or Apple TV, subscribe to the service for $12.99 a month—with a 30-day free trial if you’re a new user—and connect the C6 Bike to the app.

When you do so, the app tracks only cadence. It can also measure heart rate, but it prompts you to connect a separate sensor. The Apple Watch is one option for that courtesy of Peloton’s watch app, which also gives you at-a-glance metrics during a workout.

There are a few downsides to using Peloton on the C6 Bike instead of a Peloton bike. You don’t appear on Peloton leaderboards. You can’t use Peloton’s video-chat feature to communicate with other Peloton-using friends (but that’s easily replicated on an iPad with the video chat service of your choice). Worst of all, Peloton’s iOS app is missing two marquee Peloton-bike features that would make me more likely to sign up:

Kurt Kinetic is a well-known maker of bike trainers—including the $599 Kinetic Rock and Roll model that I tested (and that now appears to be sold out).

Kinetic also makes software, notably the Kinetic iOS app. It is not as cool as Zwift, but many serious cyclists regard it as a gold standard because of its specialized fitness tracking. I have no idea what “lactate threshold” is, but the app measures that.

The Kinetic app also connects to the C6 Bike and provides more data than other apps, including speed, cadence, and heart rate—but, again, where is that data coming from?

Peloton and Kinetic, Together

Digging around the Web, I discovered that some users of the C6 Bike use the Peloton and Kinetic apps in tandem—often with an iPad split screen. The Peloton app gives them the spin-class experience they crave in a data-light fashion, while the Kinetic app fills in additional metrics that nerdier riders require.

You can really get into the weeds here, so rather than try to explain it all, I’ll point you to lifestyle blogger Leslie Lambert. She has written a trio of posts that dissect how she transformed her bike, the near-identical IC4 Indoor Cycling Bike from Schwinn, into what she calls a “DIY Peloton.”

You aren’t limited to the big names of online fitness. Here are other C6 Bike-compatible apps that stand out for me:

Other apps I did not test but verified as compatible with the C6 Bike include:

Is the C6 Bike Right for You?

Not everyone will follow my lead in avoiding Peloton bikes. If you have an ample budget and are drawn to the rich culture with charismatic instructors that Peloton has fashioned over the years, don’t let me stop you. Peloton has lately seen financial troubles and seems to have an uncertain future, with the possibility of being acquired (Apple has been mentioned as a potential buyer, but that seems highly unlikely). But I don’t believe its bikes will be obsolete anytime soon, even though Bloomberg’s Mark Gurman has recommended that Peloton get out of hardware entirely.

What bothers me about Peloton, in addition to the steep hardware cost, is the service lock-in. With the C6 Bike, I have at my disposal a veritable buffet of available services—even Peloton, albeit in a form that’s more limited than what Peloton bike owners enjoy.

Before you buy a C6 Bike, however, ask yourself a few questions:

Bottom line: the C6 Bike has limitations, but overall, it’s a flexible and attractively priced spin bike with which you can explore a universe of workout options.