It seemed as though the temperature in hell was falling fast when Apple announced the Self Service Repair program last year (see “Apple Announces Self Service Repair Program,” 17 November 2021). Steve Jobs famously despised the thought of users prying open their Macs, and that attitude has been baked deep into the company’s DNA ever since the second Jobs era. But the Right to Repair movement—especially a shareholder resolution in support of it—forced Apple’s hand. 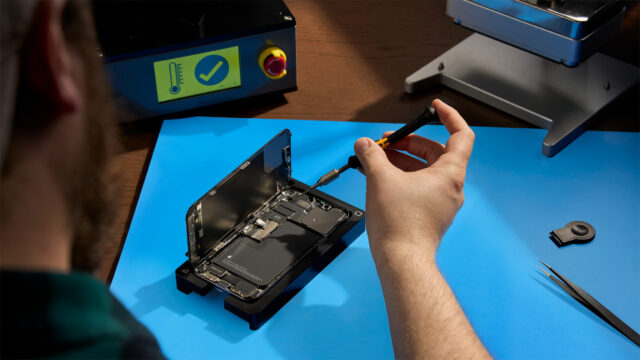 The Self Service Repair program is now available through the new Self Service Repair Store at www.selfservicerepair.com. Yes, that is the correct site despite the generic URL, complete lack of Apple branding, and WordPress template-level design. It almost looks fake. 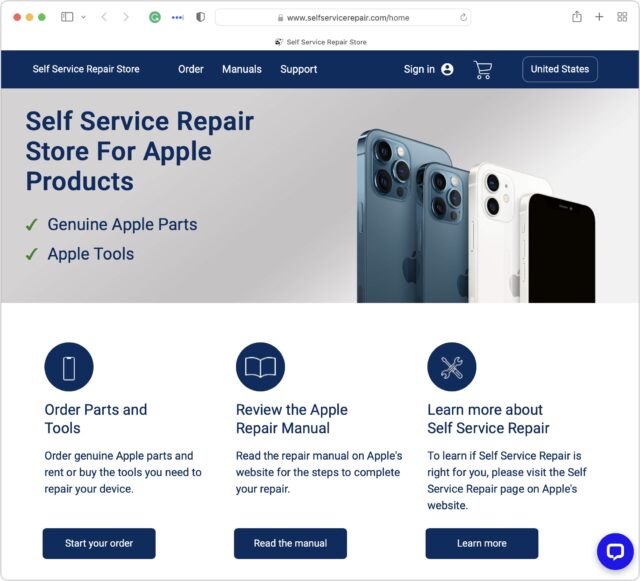 The site is actually run by a company called Service Parts or Tools, Inc. or SPOT, demonstrating just how enthusiastic Apple is about this program. Stephen Hackett tracked the domain to an Apple partner called Communications Test Design, so perhaps Apple has outsourced the entire Self Service Repair program.

So far, the Self Service Repair program is extremely limited, covering only the iPhone 12 and iPhone 13 lineups, along with the third-generation iPhone SE. We would assume that most people who need a phone repair have an older iPhone. Also, no other devices are currently supported. In a white paper titled Expanding Access to Service and Repairs for Apple Devices, Apple says:

In its initial phase, the Self Service Repair program is offering access to more than 200 individual parts and tools, allowing customers to perform the most common repairs on iPhone 12 and later models, soon to be followed by Mac computers with Apple silicon. This program launched in April 2022 in the US and will expand to Europe later in 2022.

As it stands, the program offers the following repair types:

As independent Mac repairman Louis Rossman pointed out, the Self Service Repair program doesn’t include one major repair type: the Lightning port. The last time I had to get service for an iPhone was for broken pins in the Lightning port. In that case, however, Apple replaced the entire iPhone, so maybe Apple isn’t confident that technicians can make that repair quickly or effectively.

The cost of a self-service repair varies greatly depending on which option you pick. A battery replacement bundle for the iPhone 13 costs only $70.99, but the bundle to replace the screen will set you back $269.95. You also receive a credit for returning the original part so Apple can reuse or recycle it. The battery bundle is $46.84 with the credit, and the screen kit costs $236.35 after the credit.

The Self Service Repair Store also offers miscellaneous parts, like security screws for $0.20 or a SIM tray for $7.20. Considering that these are all genuine Apple parts, these seem like fair prices.

Interestingly, the Self Service Repair Store also sells a wide assortment of official tools, like torque drivers, a heated display pocket (to glue the screen back on), and even a full display press. These too are surprisingly reasonably priced, with the most expensive tool—the heated display removal fixture—costing $256.36. You could build your own iPhone repair shop for well under $1000.

The good news is you don’t have to buy all of these tools. The Self Service Repair Store will let you rent a tool kit for 7 days for $49. Each iPhone model has a different tool kit that contains all the tools you need to perform the possible repairs.

Industry and repair experts agree that the vast majority of board-level repairs are best performed in a factory environment using specialized equipment capable of producing high quality, reliable, and repeatable results to meet original equipment manufacturer (OEM) standards. Boards are packed with many small components necessary for the device’s proper functioning. For example, ball grid array (BGA) parts require specialized equipment for their repair that is restricted to factory or advanced repair environments due to its cost and complexity. Therefore, board-level repairs, particularly those involving soldered components, are best performed by certified technicians who use controlled processes, calibrated factory equipment, and rigorous testing.

While it’s fair to say that soldered repairs are difficult, that’s still not sufficient reason to withhold the full schematics. As it stands, independent repair shops like Rossman’s have to rely on bootleg schematics to perform their repairs.

You might wonder what a self-service repair does to your warranty. Happily, nothing, as long as you don’t cause more damage. Apple says:

The customer’s product warranty is not impacted by a Self Service Repair, however any issue or damage caused by the customer over the course of the repair would not be covered by Apple.

Nitpicks aside, the Self Service Repair program is substantial and more than the mere publicity stunt that Rossman seems to think it is. For the first time, the average iPhone user has access to both official repair parts and the specialized tools Apple’s own technicians use. Even if shareholders had to twist Apple’s arm to implement it, and even if Apple seems to be trying to distance itself from the Self Service Repair Store, it’s a huge step forward for Right to Repair.