A few weeks ago, we took our first significant trip since the start of the pandemic, visiting our son Tristan in Vancouver. The trip went well, and we escaped infection thanks to masking in airports and airplanes (as is required in Canada) and during indoor public activities we couldn’t avoid. Four COVID-19 vaccine doses for both of us likely helped as well.

More interesting for TidBITS were some of the changes in travel-related technologies since our last trip. We stumbled across our first use of App Clips in the wild, enjoyed using CarPlay in a rental car, butted heads with Apple Maps over illegal U-turns, and stayed online easily thanks to our T-Mobile plan’s cross-border coverage.

App Clip Seen in the Wild

Two years ago, Apple introduced App Clips, which give you an app experience without having to install a full app. In “iOS 14 and iPadOS 14 Echo Android and Newton” (22 June 2020), Josh wrote:

App Clips let you use just a bit of an app without installing the whole thing. You might launch that App Clip from a Web page in Safari, an iMessage, a place in Maps, or even an NFC tag or QR code. For instance, you could rent one of those godforsaken scooters without installing the full app. Each App Clip is less than 10 MB in size and is automatically removed when you no longer need it.

That was the last time I even thought about App Clips; I’d never run into one or heard from anyone who did. However, when we stopped for gas at an Exxon Mobil station on our drive to Toronto, we saw a sticker advertising an App Clip as a way to pay. It was easy enough to run through the steps, though I didn’t appreciate its efforts to push me into signing up for an account. And it was completely unnecessary because the pump would have taken a straight Apple Pay payment from the same credit card. So, while the overall App Clip experience was fine, it wasn’t an improvement over just paying normally. Have you run into an App Clip in the wild that was actually useful? 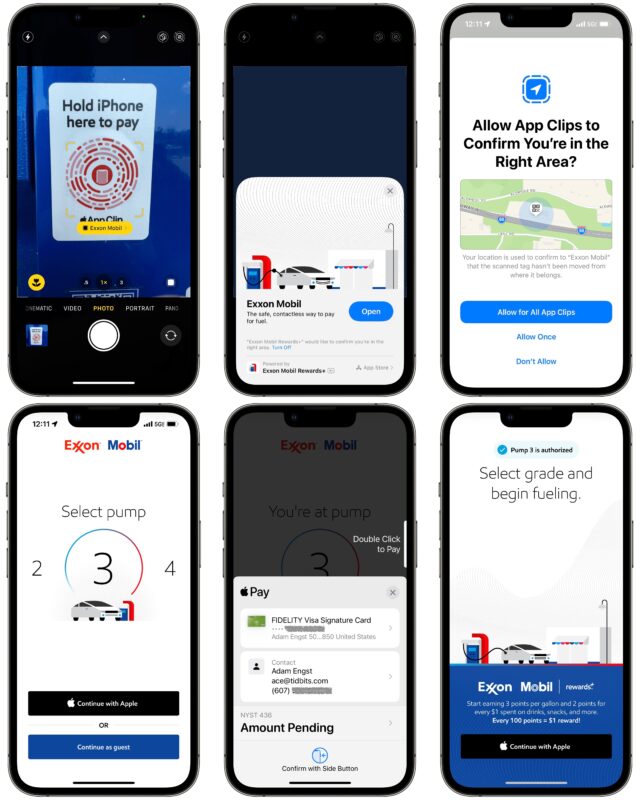 CarPlay in Rental Cars Is Brilliant

When we arrived in Vancouver, we rented a car from Budget. You never know exactly what car you’re going to get, so we were pleasantly surprised with the Hyundai Kona we received. The best part was its support of CarPlay, which let me use my iPhone for navigation with the car’s built-in screen. Given that rental cars tend to be relatively new models, I imagine CarPlay availability in rental cars is increasingly common, and I know I’ll be explicitly asking for it in rental cars from now on.

Pairing my iPhone 13 Pro to the car using CarPlay was easy, thanks to the on-screen hint—I don’t know if I would even have thought to try otherwise. While it was connecting, I adjusted the mirrors and seats, after which I was able to give Maps our destination and set off. 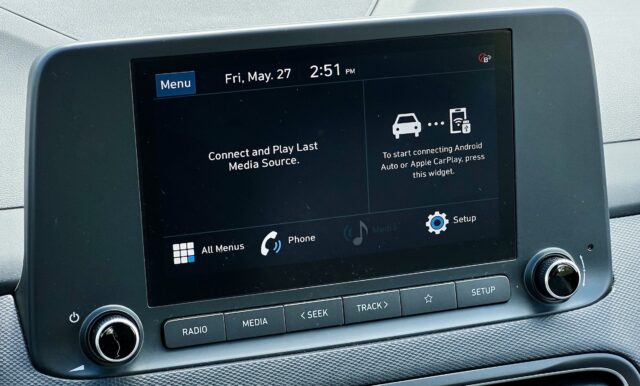 It was a great experience, and one that was far better than trying to prop the iPhone on the dashboard somewhere to be able to see the screen while driving. The next time you rent a car, see if it supports CarPlay.

Apple Maps has been improving, to the point where its current state was recently featured in an xkcd comic. I used it for much of our trip, and it worked well. I particularly appreciated its contextual directions, such as “Go through the next stoplight and at the following light, turn left.” (The wording is probably slightly different; I forgot to write it down on the spot.) That would be followed by a “Turn left on Hastings Street” after passing the first stoplight. In contrast, Google Maps, which is equally available in CarPlay, relied on distances and street names, with instructions like, “In 600 meters, turn left on Hastings Street.” Knowing that I need to turn left sometime soon isn’t nearly as helpful as knowing that it’s at the second light. In both cases, the screen would show me that the turn was two lights away, but the Apple Maps display was easier to read as well. 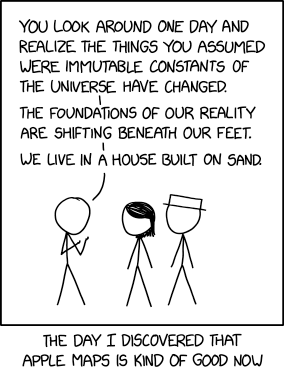 In fact, I wouldn’t even have tried Google Maps via CarPlay but for one infuriating and dangerous lapse in Apple Maps. Whenever I left its prescribed route, it instructed me to make a U-turn to get back on track. Unfortunately, as the British Columbia Ministry of Transportation and Infrastructure says, “There are very few situations where U-turns are legal for the traveling public.” That includes intersections with traffic lights, where Maps told me to break the law repeatedly. 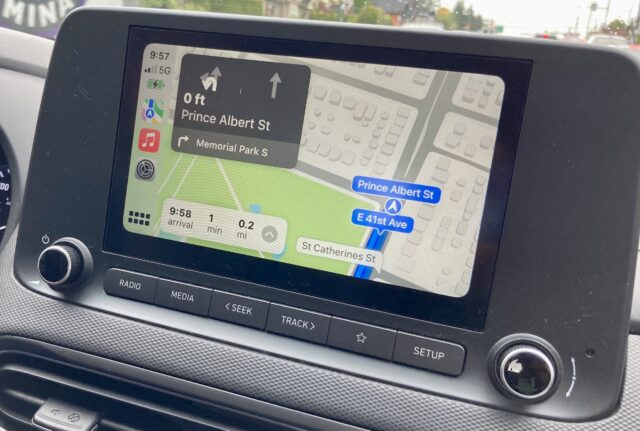 Frankly, this is embarrassing and unnecessary. The entire point of a mapping app is that it gives you appropriate directions in your current location, which should include the local rules of the road. I realize that laws surrounding U-turns vary by locale, but I see no reason Apple couldn’t build geofences around certain areas to avoid giving illegal instructions in those spots. If that’s too hard, a switch in Setting > Maps > Directions > Driving for Avoid U-Turns would let users manually shut down such illegal behavior.

When I switched to Google Maps, it didn’t direct me to take any illegal U-turns, but it wasn’t a fair test since I wasn’t able to make the same driving mistakes in the same spots. (Hey, I was on vacation!) I thought I remembered seeing an Avoid U-Turns setting in some physical GPS units (we reviewed a bunch years ago in our Find Yourself with GPS series), and while I couldn’t find much support for that, Travis Butler’s review of the Garmin iQue confirmed it was an option in at least one unit (see “Increasing Your Cartographic iQue,” 9 January 2006). So maybe avoiding U-turns is more difficult than it seems, but I think it’s an important feature to add.

Another useful feature that Apple could add is a screen summarizing key local rules of the road whenever you launch Maps in a new location. Right-on-red rules are the most obvious because those vary widely. We ran into several local oddities (to us) in Vancouver, such as flashing green lights that indicate that the light is pedestrian-activated and cars in the cross streets only have stop signs. That causes confusion because flashing green lights in Ontario have historically indicated a protected left turn. The one that really threw us was the meaning of yellow traffic lights. In British Columbia, it’s illegal to enter an intersection when a traffic light is yellow unless it’s unsafe to stop. That’s also true of some US states, but here in New York, yellow merely means that the light is about to turn red—as long as you enter the intersection before it turns red, you won’t get a ticket. Several cars turning left from the other direction were unhappy with me when I blithely (but safely) drove through a yellow light, blocking them from turning when they thought they should be able to go.

Finally, this is our first trip to Canada since switching to T-Mobile from AT&T last August. We made the change right before Tristan moved to Vancouver so his iPhone would work instantly without additional fees, thanks to T-Mobile’s built-in support for Canada and Mexico. We figured that, pandemic permitting, we’d also be visiting Canada a bit more, and with AT&T, we always had to do something special to be able to continue to use our iPhones (see “How to Avoid Data Overage Charges When Traveling to Canada,” 31 July 2015). Our last visit in 2020 involved a $10-per-day International Day Pass. AT&T may have better roaming plans available now, but if not, paying an extra $140 for cellular connectivity on our week-long trip would have been annoying.

T-Mobile worked perfectly. When we crossed the border on the way to Toronto, I received a text message telling me that my connectivity would continue to work, and while sitting in the Vancouver airport on the way home, I got another message telling me that I’d used up 80% of my 5 GB of high-speed data. If I had used up the rest, I would have been throttled down to 2G speeds. Nevertheless, knowing that I used 4 GB for a week of normal travel is good to know—for a longer trip, I might try to be a little more careful. If you plan to go back and forth to Canada or Mexico from the US frequently, check out T-Mobile.

All in all, it was a successful trip, from both the vacation and the technology perspectives. Here’s hoping that travel becomes sufficiently less stressful that I can play with more travel-related tech soon!

Comments About Tech Notes from a Cross-Border Trip to Canada