The group communication service Slack, used by small and large organizations alike, has announced that it will raise its prices and change the restrictions on free accounts starting 1 September 2022.

Currently, Slack’s Pro plan costs $6.67 per month per active user when paying annually, or $8 per active user per month if paying monthly. In September, those rates will increase to $7.25 and $8.75, an 8–9% jump. Although Slack presumably isn’t affected by supply chain issues or raw material price hikes, competition for employees, inflation, and the current not-yet-declared recession are undoubtedly driving up salary and other costs. So be it.

I want to focus instead on the changes Slack is making to its free plan. As it stands now, free teams are restricted to being able to see the last 10,000 messages chronologically and access the most recent 5 GB of files. (Compare that to the Pro plan’s unlimited messages and 10 GB of files per user.) A free plan can connect up to 10 apps (against unlimited integrations in the Pro plan) and engage in one-to-one voice and video calls (compared to the Pro plan’s group calls with up to 15 people). Come September, free plan restrictions will change to provide access to only the past 90 days of message and file history, regardless of number or size. Users of free accounts will also be able to share audio and video clips.

When I read about the change, my visceral reaction was negative. I maintain three free Slack teams: one for TidBITS writers, another for the public SlackBITS discussions, and a third for our families (see “Fed Up with Facebook? Move Your Family to Slack,” 12 February 2019). My impression was that traffic in all three teams was sufficiently low that we’d be losing access to many old messages and files. I wasn’t alone—comments in both TidBITS Talk and SlackBITS agreed. It felt like when Dropbox started restricting users of its free Basic accounts to just three devices, which was problematic for those of us with four or more devices, as is easily the case with desktop and laptop Macs, plus an iPhone and iPad (see “Dropbox Limits Free Accounts to Three Devices,” 14 March 2019).

However, when I examined my assumptions—that the change would affect my use of Slack and that Slack was trying to push more free teams to convert to paid teams—I found that my initial irritation didn’t hold up under scrutiny. If you reacted to Slack’s announcement as I did, perhaps my reasoning will assuage your annoyance. And if not, there are always alternatives.

The most important question to ask yourself is, “Do I regularly search for messages or files older than 90 days?” In fact, there are two parts to that question: do you regularly search in Slack in general, and when you do, are you looking for older messages and files?

I honestly can’t remember the last time I searched in Slack, in any of my teams or other public teams. There are two reasons for that:

That’s not to say that you won’t find searching in Slack useful—I’m sure there are plenty of examples of teams where being able to find previous messages or files is important. But we should acknowledge that searching is not a major need for many teams.

Let’s say you do find searching important—or even just scrolling back in the message history beyond the most recent messages. That’s when we get to the second part of the question: are you looking for messages or files older than 90 days? Whenever I look back, I’m trying to find details from conversations that took place in the last few weeks. I couldn’t even begin to tell you what my teams were discussing 30 or 60 days ago, much less 90. That’s not to say that a search in the current world order might not turn up a message or file that’s much older, just that I have very little internal awareness of the dates surrounding what happens in Slack.

Part of my vagueness surrounding what happens when in Slack stems from the knowledge that my teams are limited to 10,000 messages and 5 GB of files. Since I never had any sense of how quickly any particular team would hit those limits, I’ve always treated Slack as ephemeral, unlike email, where I know I can search my entire Gmail archive at any time. Similarly, when my teams share files, we treat Slack merely as a transmission method, not an archiving medium. When someone sends me a file in Slack, I always save it to the Finder, import it into Photos, or otherwise make a local version.

But that’s just me. I wouldn’t recommend that anyone assume a free Slack account is useful as an archival solution, given that you know messages and files will eventually become inaccessible, but you may feel otherwise. And in that case, you might be worried and disappointed.

My next assumption was that Slack was making these changes because the company thought it would push more free teams to pay up. Slack claims, “The majority of our active free teams will have access to more of their message history with the new 90-day limit compared to the previous limit.” In my irritated state, I read that not as an improvement but as a justification—sure, 51% might, but what about the rest of us? It’s always about the money, isn’t it?

After thinking through the possibilities, though, I can’t see that Slack’s change will likely generate more money from existing users or save money on reduced resource usage. Teams fall into three categories in this respect:

Instead, I’m inclined to believe Slack’s press release, which says, “we’re updating our Free subscription to make it easier than ever for users to try out new features” and “we’re also simplifying subscription limits.” With this change, the free tier continues to provide largely the same service for many existing users—based on my reasoning above—but may attract new users more effectively.

That’s key. Remember, the free tier of Slack is, above all else, a marketing tool. Slack—which is part of an array of business tools from corporate parent Salesforce—is competing for paid business customers against the likes of Cisco, Google, Microsoft, and other, more specialized companies. Making Slack easier to take out for a trial run may help with marketing and sales. If you’re considering creating a free Slack team, it’s easier to conceptualize a flat 90-day history than limits of 10,000 messages and 5 GB of files.

I’ve been using Slack for years, and I had no idea how many messages my teams have carried nor how much storage my files occupied. While researching this article, I got curious and figured out how to find these numbers for my teams. If you click a free team’s name in the second column, you can see the total messages in the menu that appears. 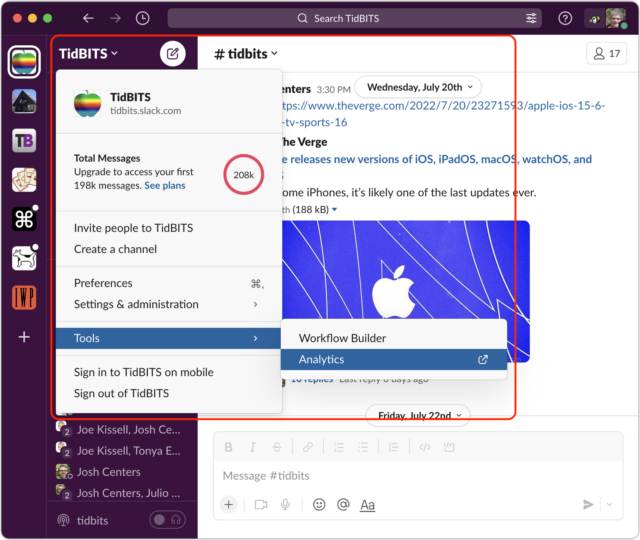 If you then choose Tools > Analytics, a page opens in your browser with the full statistics—not all teams may allow such access. As you can see, my TidBITS team has generated 208,040 messages across all time but only 5 GB of files. More usefully, it tells me that we’ve created 1356 messages in the last 30 days, and if we assume an even rate of message creation, that would put us just over 4000 messages for 90 days. 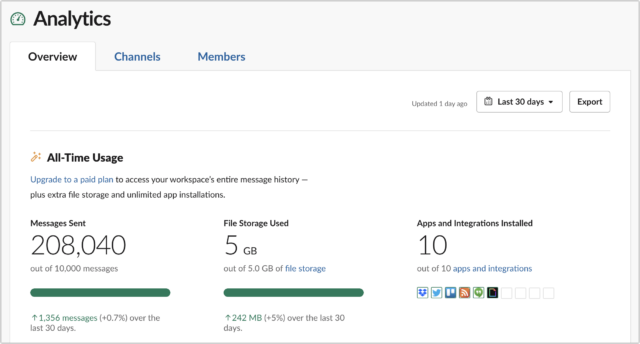 So we’re losing out with the new approach, and SlackBITS and my family team have even lower volume, thus losing even more message and file history. It’s good that we don’t look back much in the TidBITS team. If we did, and even if I removed the 20 users left over from Take Control days, it would cost us $72.50 per month, or $870 per year. That’s a lot to find old messages or files.

It is worth noting that if you switch from a free plan to a paid one, Slack immediately restores all your old messages and files. Slack never deletes them; it just makes them inaccessible once you’re over the limit on a free plan. So if you decide to leave Slack, you could presumably remove all users but yourself, pay $8 for a single month of Slack, and export your content. Whether or not you could load that into another service remains a question, but many competing services support importing that Slack export.

If you’re still sufficiently annoyed at Slack and concerned about your inability to find messages and files older than 90 days, you could take your export and jump ship. There are tons of alternatives, many of which have free plans that provide unlimited messaging and search history. I’m told that many Slack workgroups that outgrew the free plan shifted to Discord, which was designed for gamers and “fandoms” but has matured into something that’s more broadly used. It’s entirely free—the only paid add-on, the $9.99-per-month Nitro plan, offers nothing of interest to most people who would be transitioning from Slack.

Other options abound, and they’re so similar (in the ways that they compare to Slack’s free plan, anyway) that it’s not worth creating an expansive list—skim through some of the articles linked in this Brave search, where you’ll find the likes of Bitrix24, Chanty, Fleep, Flock, Jandi, Microsoft Teams, Missive, RingCentral, Troop Messenger, Twist, and Zulip. It’s also worth some research to see if a particular tool can import your Slack export.

What Should We Expect for Free?

In the end, I’m left pondering what rights users of free services have, if any. Freemium business models are central to today’s Internet and app economies, but users of free services legitimately feel they’re owed something in exchange for having committed to the service. I fall into that category—I expect certain things from Apple, Dropbox, Google, Slack, and many other companies that provide me with essential services for free.

Is that rational? Maybe? There’s at least an implicit contract involved when signing up for a free service, and just as it’s reasonable to be disappointed when someone fails to follow through on a promise, we can be unhappy when a free service changes in a way we don’t like. Without money changing hands, though, it becomes harder to argue that the companies in question have the same responsibilities to their free users as they do to their paid users.

Then again, what rights do paid users really have? They certainly have the moral high ground from which to complain, and they’re more likely to win a lawsuit for failure to perform, but it’s not as though being a paying customer guarantees that everything will work as promised and will never change for the worse. All you really have, regardless of how much you’re paying, is the freedom to vote with your feet and leave. And of course, because this is the modern world, the right to complain online and hope the negative PR has some effect.

Slack’s free plan change might have been entirely innocent, better for more active free teams, and simpler for those considering Slack, but it was still a misstep, if only in the sense that the company could have given existing free teams the option of sticking with the previous limits or moving to the new ones. More work, yes, but with the benefit of no hard feelings from existing users, at least some of whom are now unhappy with Slack, even if not enough to leave.