The 5G world is confusing. Although there are lower frequency 5G bands with unexceptional performance, each of the big three American carriers has its own high-performance variant: AT&T’s 5G+, T-Mobile’s Ultra Capacity 5G, and Verizon’s 5G Ultra Wideband. (Each gets its own icon on the iPhone too.) Which one is best? Opensignal performed the industry’s first direct comparison of the three services and found that while Verizon’s 5G Ultra Wideband had an edge in performance for some uses, T-Mobile’s Ultra Capacity 5G was available in more places by far. All three were considerably faster than standard 5G, but in our view, T-Mobile wins overall with its superior coverage and throughput on par with Verizon’s. AT&T fared the worst, both in coverage and speed. 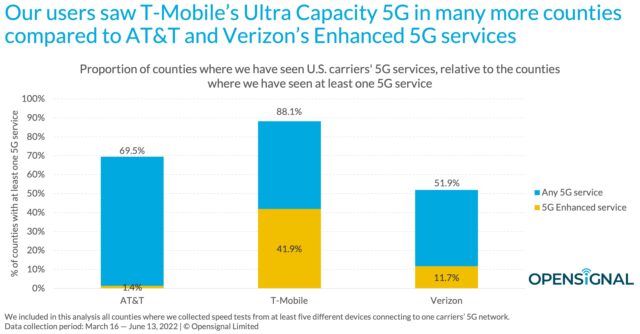 Comments About Who Has the Best Enhanced 5G: AT&T, T-Mobile, or Verizon?