Back when I was first working on Take Control of Apple TV in 2014, which was about AirPlay as much as the Apple TV itself, I thought to myself how nice it would be if I could AirPlay content from my iPhone to the larger screen of my Mac when in my office. Years passed, and I gave up on Apple ever offering such a feature, but then Apple surprised me by announcing AirPlay to Mac in macOS 12 Monterey.

The question is: who wants to use AirPlay to send audio or video from an Apple device to a Mac? If our recent survey of TidBITS readers is anything to go by, the answer is: maybe not many (see “Survey Results: Which iOS 15 and macOS 12 Monterey Features Do You Actually Use?,” 8 August 2022). In the survey, 74% of respondents reported never having used the feature, with 21% saying they used it occasionally and only 5% using it frequently. In an era of ubiquitous access to cloud-based services, AirPlay may not be as relevant as it once was, but there are still times when being able to AirPlay to a Mac could be a helpful trick, especially if you connect a Mac mini to your TV as a home entertainment device.

Another use case you may appreciate is AirPlaying audio from your iPhone to your Mac. Your Mac undoubtedly has better speakers than your iPhone, so you get better audio quality while sitting at your desk. Plus, you can use your iPhone as a remote control device if that’s more convenient than fussing with apps on your Mac. Lastly, if you need to leave your desk, you can turn off AirPlay on your iPhone to keep playing the audio without missing a beat. This approach works particularly well with apps like Overcast that aren’t native to the Mac. Instead of messing with the minimalistic Overcast Web interface and hoping it syncs correctly, you can AirPlay from the Overcast iPhone app to your Mac.

The receiving Mac must be in the list below and running Monterey for AirPlay to work:

Also, make sure that AirPlay Receiver is enabled on your Mac. It should be on by default, but check by going to System Preferences > Sharing and making sure that AirPlay Receiver is selected. You can also choose to restrict AirPlay to the Apple ID tied to the current user or anyone on the same network, and you can set an AirPlay password to restrict access further if you have office or family pranksters. 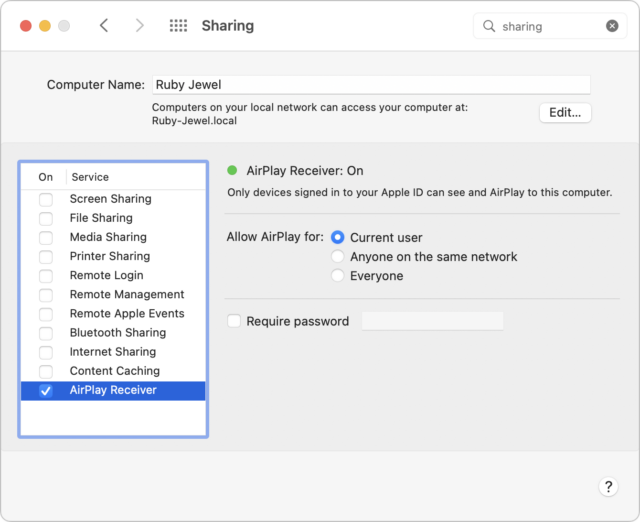 As far as the iPhone goes, you need only an iPhone 7 or later. Apple says that even older iPhones may be able to AirPlay to Macs at a lower resolution if you enable Everyone in System Preferences > Sharing > AirPlay Receiver.

AirPlay Audio to a Mac

AirPlaying audio is the simplest and maybe the most useful, so we’ll start there. All you have to do is initiate AirPlay from your device and select the Mac as the target.

In iOS and iPadOS, the easiest method is to look for the AirPlay icon in your audio app—it looks like a triangle topped with three circles. I’ve highlighted examples from Audible, Music, and Overcast in the screenshot below. Tap the AirPlay icon, select your Mac, and the audio should start. If you can’t hear anything, you may need to turn up the volume on your iPhone or iPad and the receiving Mac. 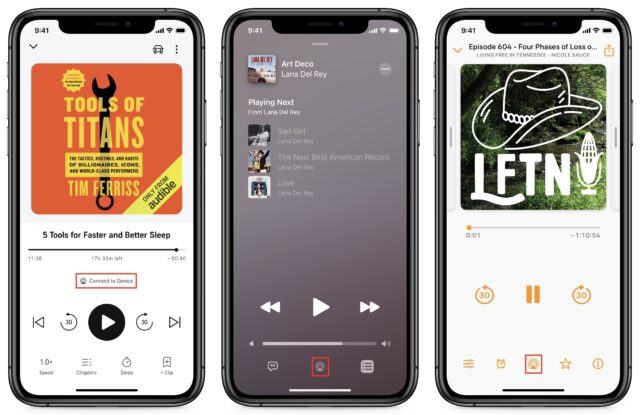 YouTube is a little tricker. You have to tap the Chromecast icon and then AirPlay & Bluetooth Devices. 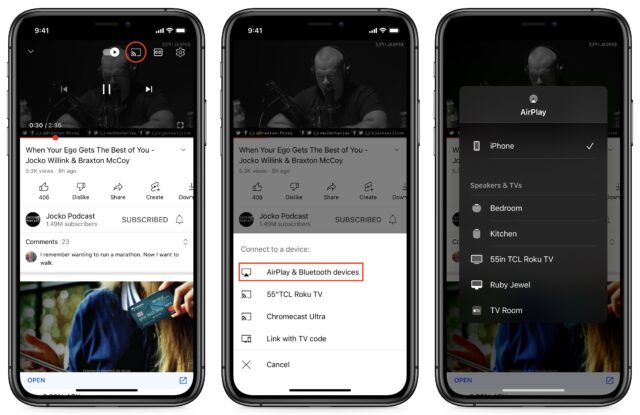 If your preferred app doesn’t have an obvious AirPlay icon, you can initiate AirPlay from Control Center. Tap the AirPlay icon in the upper-right corner of the media player control and select your Mac as the output device. 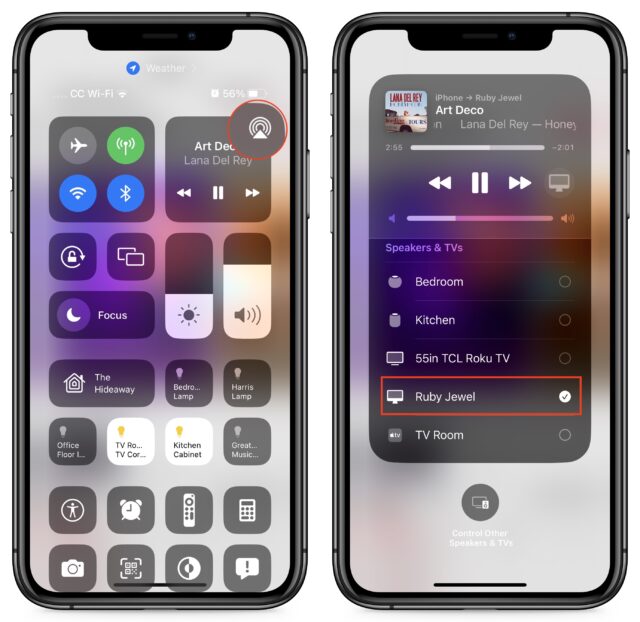 Mac apps don’t tend to have AirPlay icons. One notable exception is Music, which displays a pop-up menu that lets you select multiple AirPlay receivers. You can use that feature to fill your entire house with audio by selecting other Macs, HomePods, and even Apple TVs. This is one of Music’s underappreciated features, and it has only improved over the years as Apple has expanded AirPlay’s reach.

The best way to send AirPlay audio from a Mac is through Control Center in the menu bar. Click the AirPlay icon in the Sound controls and select an output device. Note that this causes all media audio to be played through that AirPlay receiver, but system-generated sounds remain local to your Mac. 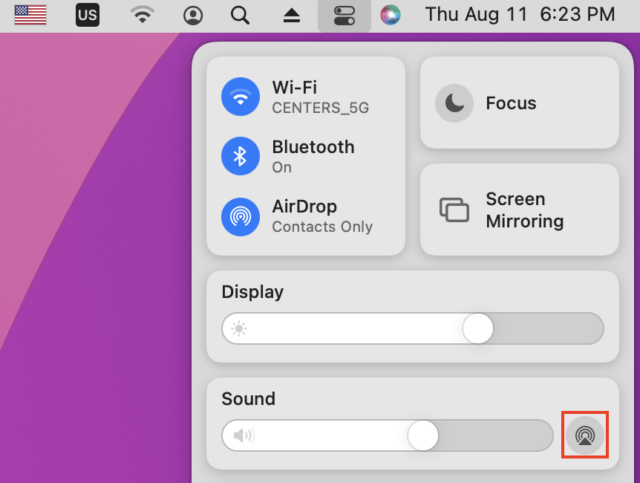 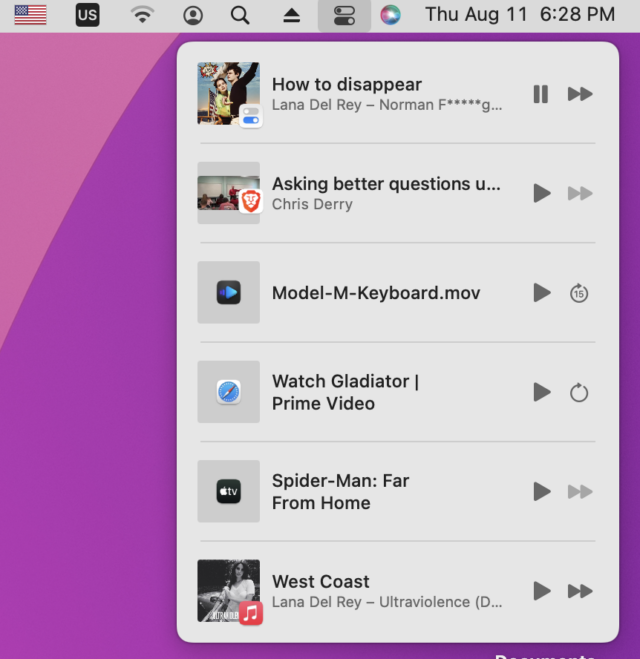 AirPlay Video to a Mac

AirPlaying video works the same way in iOS and iPadOS: tap the AirPlay icon in an app or go through Control Center.

From a Mac, it’s a little trickier and must be triggered on a per-app basis. Two apps that support AirPlay are Apple’s QuickTime and TV apps, which display an AirPlay icon in the control panel. Note the​​ AirPlay video icon has the triangle topped with a rectangle.

Safari also includes AirPlay support. Video sites like YouTube (shown below) that offer AirPlay features provide an AirPlay icon. However, other sites, like Amazon Prime Video, do not support AirPlay. 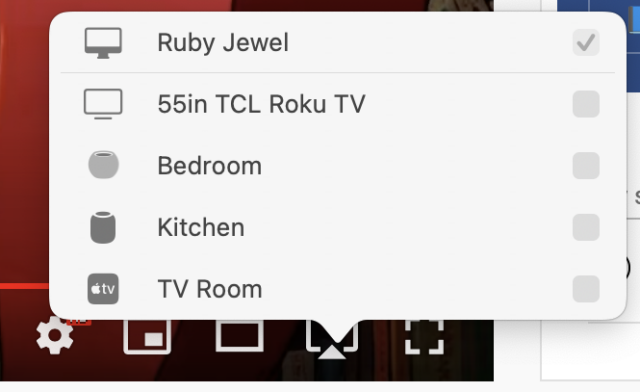 Unfortunately, receiving AirPlay video on your Mac takes over your entire machine. Video is played fullscreen, with no option to shrink it to a window. Plus, if you have multiple monitors, those not used for AirPlay are blacked out entirely. You can switch video between monitors by moving the pointer and using a menu in the upper-left corner, but no matter what, your Mac is temporarily unusable for anything else. 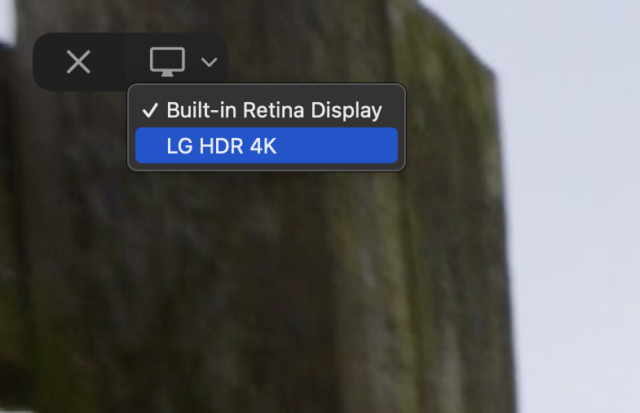 Exit AirPlay on the receiving Mac at any time by pressing Escape.

Screen Mirroring to a Mac

You can also use AirPlay to mirror one device’s screen to a Mac, which could be extremely effective when demoing something on an iPhone or iPad to other people. It’s trivial to initiate in iOS or iPadOS. Open Control Center, tap the Screen Mirroring button, and select your Mac as the destination device. Unfortunately, screen mirroring works like video—the iPhone’s or iPad’s screen takes over the entire Mac screen. 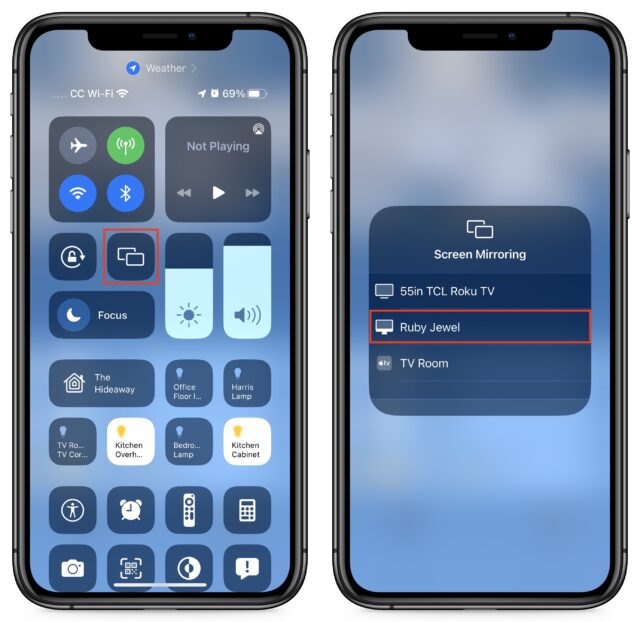 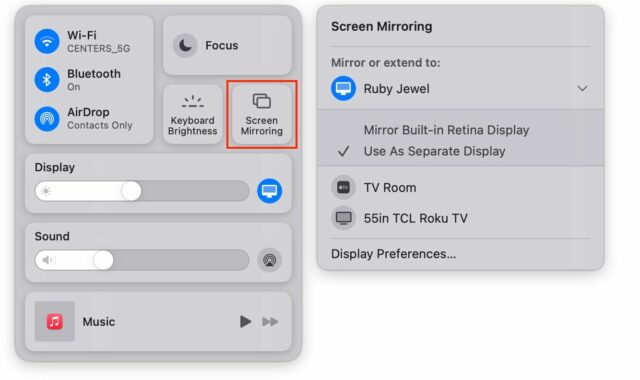 However, if you have dreams of using an older iMac as a secondary display using AirPlay, let me put an end to those right away. The resolution on the destination Mac will likely be problematic, and performance isn’t very good. When we tested this with an M1 MacBook Air using a 2020 27-inch iMac as a destination, AirPlay defaulted to the iMac screen’s native resolution, which resulted in too-small pixels. But selecting the normal 2560×1440 resolution in System Preferences > Displays > Display Settings lived up to the “low resolution” tag that appeared next to it in the list, as you can see in the oddly fuzzy screenshot below. You might be able to find a resolution that’s crisp and provides enough screen real estate to be useful, but it’s not guaranteed. 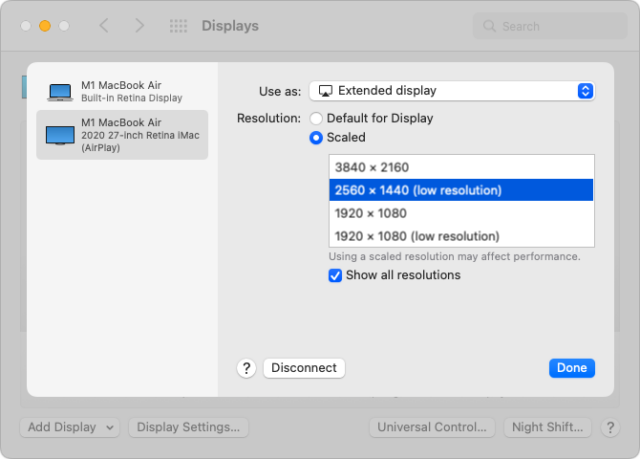 AirPlay to Mac may not be the killer feature we imagined in the early days of AirPlay, but it’s legitimately useful in all its combinations, so keep it in mind whenever you wish you could display something on a larger or additional screen.

Comments About How to AirPlay to Your Mac