Apple is now known for the cameras in the iPhone, but the first Apple camera was the QuickTake 100, released in 1994. It wasn’t the first digital camera, but Time magazine called it “the first consumer digital camera.” A video about it and its successors, the QuickTake 150 and rather different QuickTake 200, recently made the rounds on a private mailing list I’m on.

I used a QuickTake 150 for a few years starting in mid-1995, and it was an eye-opener (see “Digital Photographs as a Way of Life,” 2 October 1995). The photos were small—640 by 480 pixels—and of rather poor quality, but the freedom afforded by not worrying about wasting film or waiting to develop it was life-changing. I wouldn’t have bought the QuickTake 150 on my own—it cost $700 new—but I had written a white paper for Apple about the company’s Internet strategy, so I asked my contacts to pay me in hardware at internal prices. It was a serious score, and I ended up with quite a collection of gear, including the camera.

I’ve long maintained my QuickTake 150 photos in iPhoto and later Photos, but since they’re out of sight at the very top of my library, I hadn’t thought about them in years. Prompted by the QuickTake video, I became curious about what was in those photos, so I scrolled all the way up and was concerned to see that none of the images had previews. Worse, Photos crashed when I tried to double-click an image to view it full-size or Control-click it to see what other options might be available. I couldn’t even select the images and choose File > Export to see if I could get the originals out that way. Luckily, I could select them all and drag them to a folder in the Finder. I also verified that I could find them by searching for their .pict extension within the Photos Library package.

After export, all the photos still sported blank white thumbnails and were equally blank when opened in Preview. As the discussion progressed on the mailing list (complete with shared QuickTake photos from others), I was reminded that accessing such photos required a QuickTake Image Access extension in an old version of the classic Mac OS. Putting together such a system using SheepShaver wasn’t out of the question, but I was hoping there might be a better alternative.

So I wrote to Thorsten Lemke, the image conversion guru behind GraphicConverter, who had worked with me on “How to Create Mojave’s True Dynamic Desktops with GraphicConverter” (10 October 2018). It turned out that I should have done my homework more completely. Thorsten asked for a couple of sample images to check and then gently pointed out that GraphicConverter 11 could indeed open and convert those QuickTake 150 images, and he even made me a quick video tutorial showing me how. Color me embarrassed, but talk about great customer service!

When I followed his steps using GraphicConverter 11, it had no problem converting my images to JPEG, and it was wonderful to see those images—and the much younger people in them—once again. Here you can see me and Tonya wearing fezzes in the Archie McPhee store in Seattle, plus one of my Mac-filled office in our first house in Renton, Washington, circa 1995. 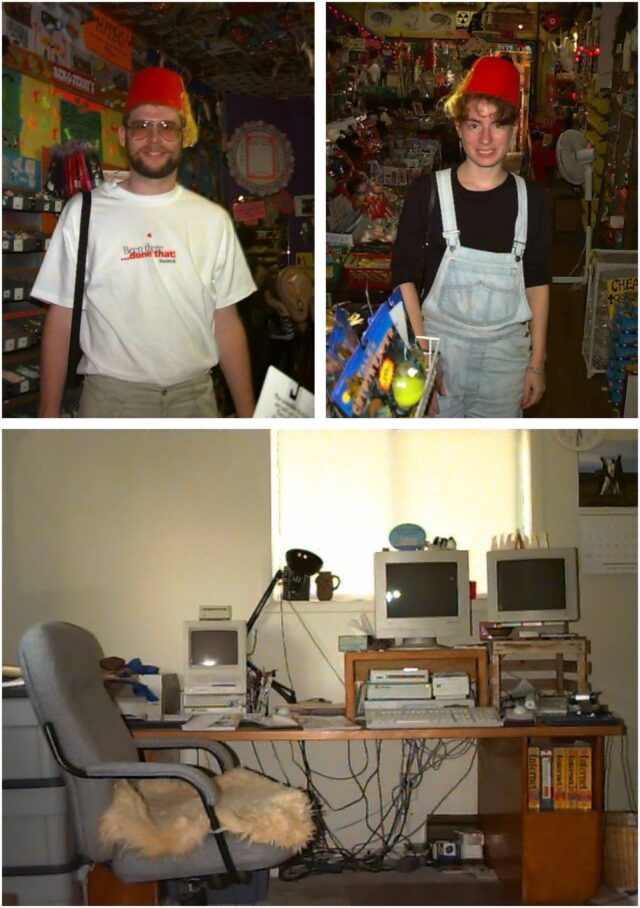 So thanks to Thorsten and GraphicConverter, and if you still have any QuickTake 150 images lying around, I encourage you to convert them while you’re thinking about it.