The new iPhones became available to pre-order on 9 September 2022 and will ship and arrive in stores on 16 September 2022, except for the iPhone 14 Plus, which arrives on 7 October 2022.

iPhone 14 and iPhone 14 Plus Core Improvements

If you’re looking for exciting technological innovations, keep scrolling. There are a handful of new features in the iPhone 14, but for the most part, it’s a warmed-over iPhone 13 with the same A15 Bionic chip as last year. Here’s a quick rundown of its improvements:

The iPhone 14 is available in midnight, blue, starlight, purple, and Product(RED). Storage starts at 128 GB and goes up to 512 GB. 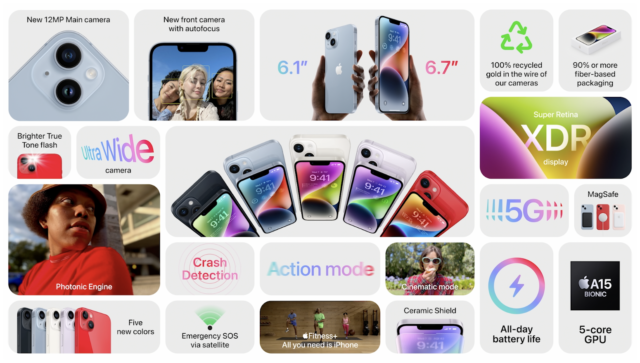 Now let’s talk about the two most innovative features of the lineup.

By far, the coolest new feature of the iPhone 14 is Emergency SOS via satellite, which taps into the new iPhone 14’s long-rumored satellite capability. But don’t get too excited, as the iPhone 14 is still not a full satellite phone, which would require a big antenna. That’s just physical reality. Instead, Apple figured out how to leverage the iPhone 14’s normal antennas with custom components to connect directly—if minimally—to satellites without additional antennas.

Emergency SOS via satellite is, as it says, for emergencies. It’s intended for contacting emergency services when you’re lost in the wilderness and can’t access a cellular tower. Since satellites are moving targets with very low bandwidth, it can take minutes for even minimal text messages to get through. The Emergency SOS process asks the user vital questions to distill the information for emergency responders and uses a special compression algorithm to shrink the messages.

There’s another hitch: you need to point the iPhone at the satellite to send or receive a message, ideally on a tall hill. The ham radio operators among you may be instantly familiar with this, as receiving or transmitting radio signals via satellite requires pointing a directional antenna like a yagi at a fast-moving satellite. Since satellites are seldom visible to the naked eye, you need a good sense of the satellite’s location and direction of travel. I use an app called ISS Detector for this.

Fortunately, the iPhone’s Emergency SOS mode will show you where to point to hook up with the satellite. I’ll be curious to see how good the coverage is since satellites tend to remain over a section of the sky for only a few minutes. Working with a satellite like the International Space Station or SO-50 requires speed and dexterity. 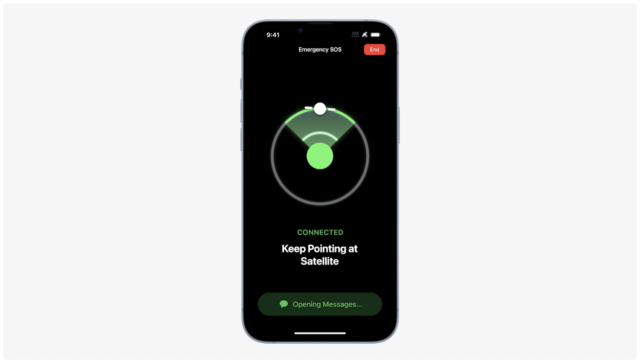 Most people will never have occasion to test Emergency SOS via satellite (we’re hesitant to test Emergency SOS even when it’s just going to call a local 911 number), but you can also use the satellite capabilities to manually share your location over satellite with Apple’s Find My system when there’s no cellular or Wi-Fi connection. Apple’s imagery revolved around remote mountaintops deep in the wilderness, but it’s easy to end up without cell service in rural areas.

Apple mentioned that the Emergency SOS feature would be free for 2 years but said nothing about how much it will cost after that or what the other details will be. We’d like to see it remain free for emergency use—it would be both tragic and terrible optics for Apple if someone died because they hadn’t thought to resubscribe before leaving for a hike with a 2-year-old iPhone 14. Alternatively, Apple could bill people who use the service after the fact. It’ll be a bit longer before we find out: Emergency SOS via satellite won’t arrive until November.

The other new emergency service is Crash Detection, the same as in the new Apple Watch models (see “Apple Watch Series 8 and Apple Watch Ultra Expand Health, Safety, and Connectivity Features,” 7 September 2022). The iPhone 14 uses the built-in accelerometer, barometer, and microphone to detect changes in g-force and air pressure, as well as loud crashing sounds, to determine if there’s been a crash. In the event of a crash, the iPhone will offer to call emergency services automatically and notify your emergency contacts.

Apple poured most of its new ideas into the high-end iPhone 14 Pro models. Let’s start with Dynamic Island. 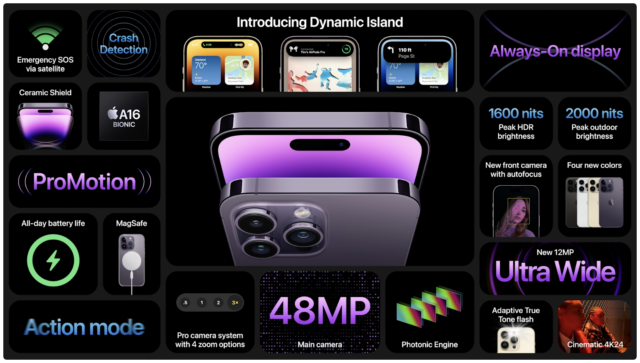 No, Dynamic Island is not a short-lived reality show on Fox in the 2000s, a comedy troupe known for hilarious raps, or a literal island. It’s the small, pill-shaped sensor package near the top of the screen that replaces the notch. It’s the biggest change in iPhone design since the iPhone X.

Instead of just letting the Dynamic Island sit there soaking up screen real estate, Apple decided to take advantage of the area to display various alerts, notifications, and Live Activities—a new dynamic notification type being introduced in iOS 16. The Dynamic Island can display the currently playing track in music, how long you’ve been on a phone call, a popup when your team scores, where your Lyft ride is, and many other things. Cleverly, even though the iPhone can’t display anything over the sensor package, it can use some screen real estate below and alongside to make the black pill-shaped area seem to be part of the notification.

The other big iPhone 14 Pro innovation is an Always-On display, much like in recent Apple Watch models. It slows the display refresh rate to 1 Hz and intelligently dims the wallpaper to conserve power. The screen is also the brightest ever in an iPhone, ramping up to 2000 nits outdoors.

Unlike the basic iPhone 14, the iPhone 14 Pro models get a new chip: the A16 Bionic, which Apple predictably claims is the fastest smartphone chip ever—40% faster than the competition! That’s probably true, and no one is complaining about getting a faster chip, but it’s probably relevant mostly in terms of behind-the-scenes processing, such as with the iPhone’s extensive computational photography capabilities. When was the last time you said to yourself, “I need a faster iPhone.”?

As is often the case now, Apple put significant effort into improving the iPhone 14 Pro’s cameras. The Photonic Engine technology from the iPhone 14 is here as well, improving mid- to low-light performance in photos across all cameras by two or three times. The iPhone 14 Pro’s main camera now features a 48-megapixel, quad-pixel sensor that combines four pixels into one for most photos, improving low-light capture and reducing file size to the equivalent of a 12-megapixel camera. However, the iPhone 14 Pro can also shoot ProRAW photos with a full 48 megapixels for an unprecedented amount of detail. It also features an improved telephoto camera with 3x optical zoom, an improved macro mode, and a redesigned Adaptive True Tone flash that changes pattern based on focal length and is twice as bright as previously.

It’s hard to recommend upgrading from an iPhone 12 or iPhone 13 to an iPhone 14. The changes aren’t that significant, particularly if you’re already using a Pro model. Welcome as the new safety features are, I can’t see most people upgrading to get crash detection or Emergency SOS via satellite. That said, the iPhone 14 is enough better than the iPhone 12 and iPhone 13 that plenty of people will choose it when upgrading from a much older iPhone or switching from Android.

The iPhone 14 Pro is a different story. The Always-On display, Dynamic Island, and improved camera system make it an easier upgrade decision for those who like to have the latest and greatest. Particularly for those who have enrolled in the iPhone Upgrade Program.

How about you? Are you tempted by one of these models, and if so, why?

Comments About Apple Unveils Four Models of the iPhone 14