I was so focused on writing about the new iPhone 14 and Apple Watch models for TidBITS and our TidBITS Content Network subscribers that I haven’t had much time to figure out what I wanted to do concerning upgrades from my current iPhone 13 Pro and Apple Watch Series 5. If a friend whose job didn’t revolve around covering Apple products had asked my advice, I’d recommend sitting tight. On the other hand, I benefit from having access to the latest and greatest Apple gear, and it can be helpful for coverage to get it as soon as possible—September 16th for the iPhone 14 and September 23rd for the Apple Watch Ultra.

After some pondering, I decided to upgrade to the iPhone 14 Pro so I’ll be able to evaluate the Always-On display and the Dynamic Island, plus take advantage of the improved cameras. I’m still on the fence about the Apple Watch Ultra. As a competitive runner, I’ve long criticized the Apple Watch’s physical design, and to this day, I usually strap a Garmin Forerunner 645 on my other wrist when I head out for a run, relying on the much-clumsier Apple Watch only when I forget the Garmin.

However, the Apple Watch Ultra promises to address my usability and screen readability complaints with its new Action button and a much brighter screen. Coupled with an app like WorkOutDoors, which sounds like it would enable an even more customizable interface than my Forerunner 645, an Apple Watch Ultra could eliminate my desire for a dedicated running watch. But $799 is a lot to pay to replace a functional Apple Watch Series 5 and the Garmin Forerunner 645 that cost me less than $300 (including the optional running dynamics pod) two years ago. Plus, the Apple Watch Ultra’s beefy size makes me want to try one on before buying, so I decided to hold off for now.

But getting to the point of making those decisions and ordering the iPhone 14 Pro wasn’t entirely smooth.

In the past, I’ve always purchased iPhones outright because Tonya and I would usually alternate years, handing the newest extra iPhone down to Tristan. Now that he’s buying his own iPhones and Tonya refuses to use anything larger than an iPhone SE, there’s no reason for me to hold onto my previous iPhone when upgrading. That made me think it was time to join the iPhone Upgrade Program, which splits the cost of an iPhone (plus AppleCare) over 24 months and lets you upgrade to the next model if you’ve paid at least 12 months, closing out the old loan and starting a new one.

However, after several trips through the purchase process, I failed to join the iPhone Upgrade Program. I ran into four obstacles along the way:

After the second rejection, I threw up my hands in frustration and decided to buy the iPhone 14 Pro outright and trade in my iPhone 13 Pro as part of that process.

Dealing with AppleCare During an Upgrade

Although I didn’t sit down with a spreadsheet to compare how the prices worked out with the myriad purchasing options, my quick estimates suggested that the result is nearly the same. Pay upfront for an iPhone, finance it over 24 months, use the iPhone Upgrade Program, whatever—you’ll pay the same amount.

Almost, that is. The main variable is AppleCare, which is optional for every approach other than the iPhone Upgrade Program. Take the AppleCare price—$199 for the iPhone 14 Pro—into account, and everything falls into line once again.

As I worked through the purchase, I realized that wasn’t quite true. I always recommend AppleCare for iPhone purchases, and I buy it myself. Previously, when I was keeping iPhones for 2 years, 2 years of AppleCare coverage matched perfectly. That’s what I bought with my iPhone 13 Pro last year. Since AppleCare goes with the device, trading in my iPhone 13 Pro would mean leaving a year of AppleCare coverage unused—roughly $100.

If you cancel your AppleCare plan more than 30 days after your purchase, you’ll get a refund based on the percentage of unexpired AppleCare plan coverage, minus the value of any service already provided.

It looks like that requires contacting Apple support, so I’ve left myself a reminder to cancel after I return the iPhone 13 Pro to Apple. If you need to check your AppleCare status, look in Settings > General > About > AppleCare+.

For the iPhone 14 Pro, I decided to try the $9.99-per-month approach, though now that I’m not caught up in the rest of the purchasing decision, I realize that it will end up costing $20 more if I replace the iPhone 14 Pro next year or $40 more if I wait another year yet. Perhaps the capability to cancel an AppleCare subscription from the iPhone itself rather than calling Apple support will feel worth the difference. And, of course, if I decide to keep the iPhone 14 Pro for longer than 2 years, the monthly AppleCare+ plan might be welcome later on.

Two other AppleCare notes. First, Apple just improved the AppleCare+ coverage to include unlimited incidents of accidental damage protection. You’ll still have to pay something for each incident ($29 for screen or back glass damage, or $99 for other accidental damage), but you’re no longer limited to two incidents per year. 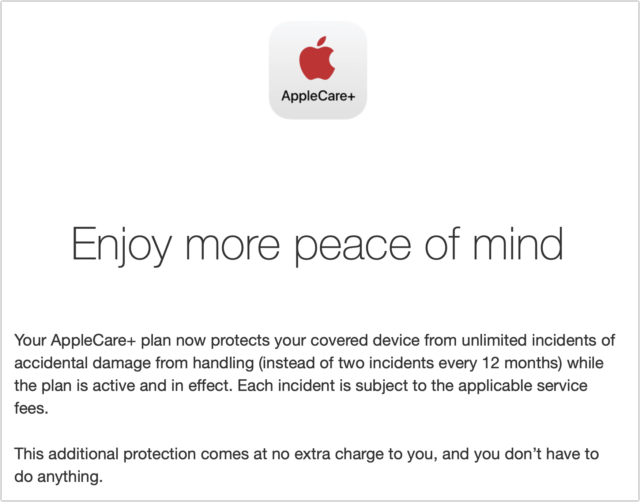 Second, Apple now offers another level called AppleCare+ with Theft and Loss, which costs $70 more than AppleCare+. It includes everything in AppleCare+, plus up to two incidents of theft or loss every year, with a $149 deductible. Paying $298 to replace a stolen $429 iPhone SE might not make sense, but shelling out $418 to recover from a loaded $1599 iPhone 14 Pro Max slipping out of your pocket in a cab feels more worthwhile.

I don’t know if Apple produced the same number of each of the bands or can produce more at the same rate. If those conditions were true, two bits of speculation would suggest themselves:

Don’t read too much into that speculation—there are way too many unknowns—but it matches up with my overall opinions, so I’m going with it. And if my Apple Watch Series 5 gives up the ghost or starts to suffer from problematic battery life, I’ll see what Apple Watch Ultra Trail Loop combos are available then.

One final point. If you want to order an Apple Watch Ultra now and get it as soon as possible, buy whatever combination will arrive first and pair it with a different band, perhaps an inexpensive knock-off (see “In Praise of the Knock-Off Nylon Sport Loop,” 19 March 2021). Apple says that 45mm bands will work with the Apple Watch Ultra’s 49mm case, although it’s slightly unclear from Apple’s compatibility information if the Solo Loop and Braided Solo Loop will work. Similarly, the Apple Watch Ultra bands can be used with the 44m and 45mm Apple Watch case sizes.