Every time the USB Implementers Forum posted a new set of logos describing ever more USB speeds, electrical power possibilities, and display parameters, it resulted in an outpouring of confusion, ridicule, and anger—yes, anger. See, for instance, “USBefuddled: Untangling the Rat’s Nest of USB-C Standards and Cables” (3 December 2021). But at long last, the USB-IF has finally made things better, with a simplified set of USB logos!

At the same time, however, a somewhat hidden aspect of USB4 cables comes to the fore with the announcement of an upcoming 80 Gbps version of USB4. Yes, it’s the return of having to worry about the distinction between passive and active cables—or is it? I explore below.

Years of multiplying USB standards led to a proliferation of labels and combinations of marks like those shown below. 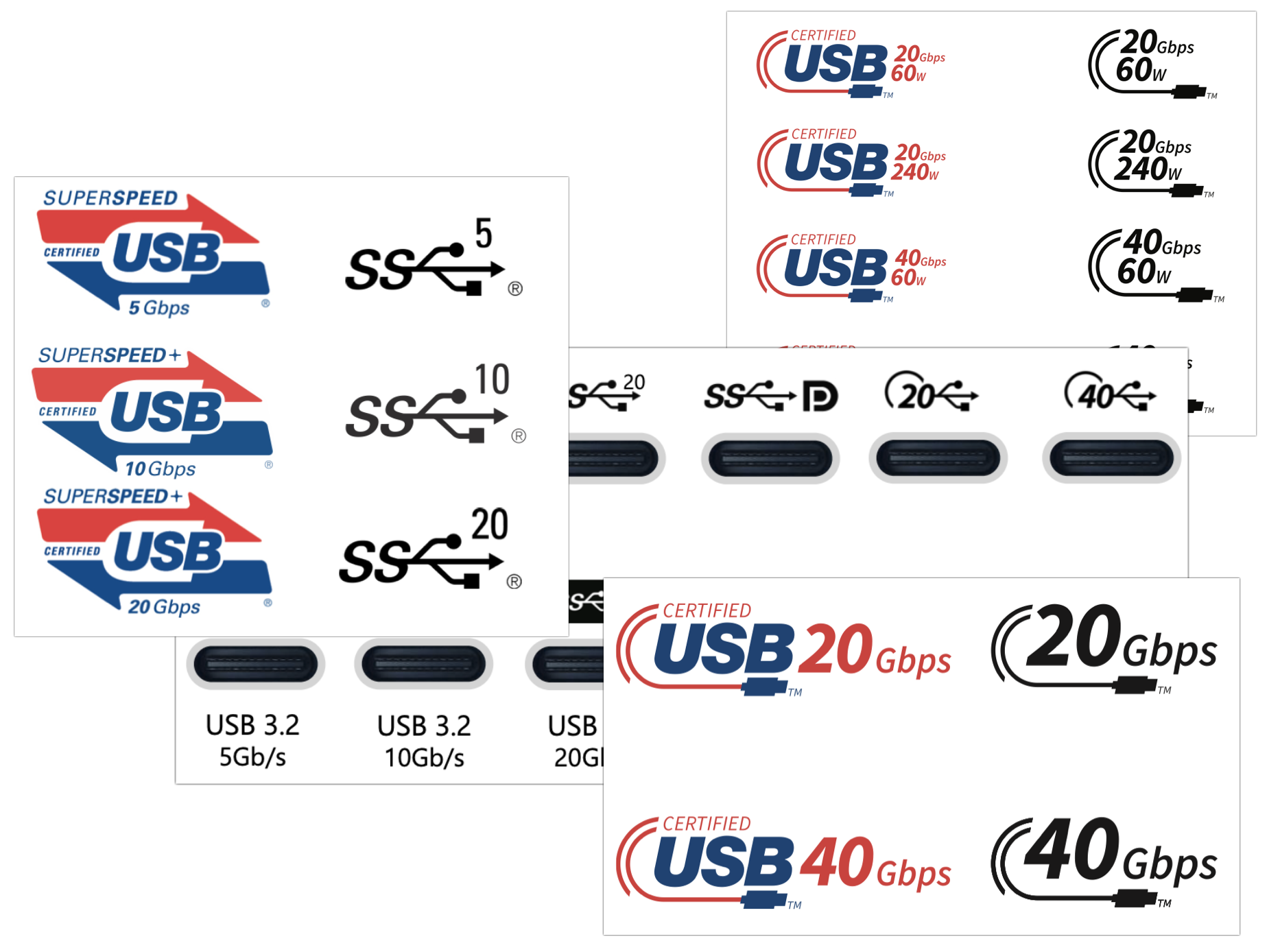 Now, at least for future products, we can move on. With little fanfare, the USB-IF has updated its USB Enabling Connections site with a new approach.

Instead of forcing consumers to use versioning terminology such as USB 3.2 Gen 2×2 or messing around with marketing terms like “SuperSpeed+,” the USB-IF has simplified things so you can now write something like“USB 20Gbps.” The version details still exist and have meaning for developers and engineers, but most of the consumer-level branding now boils down to just the following four packaging labels, indicating the maximum supported data rate.

Behind the scenes, here’s what those labels correspond to:

A future update to USB4, announced by the technical part of the USB-IF as “USB4 2.0,” will almost certainly be publicly labeled “USB 80Gbps.”

A similar set of logos will appear on cable plugs. For the two fastest current USB4 flavors, the USB-IF created a grid to show how they would appear on packaging (left column) and on ports, cables, and chargers (right two columns).

As USB data rates and standards’ names became more complicated, the options for charging wattage have been distilled down to just two: 60 watts and 240 watts, with future USB chargers using the logos below.

Not listed is the 100W charging rate that’s also the minimum wattage for a Thunderbolt 3- or 4-compatible cable. Apparently, a cable needs only a very minor upgrade to handle 240W, and it makes sense to support that new maximum performance for upcoming USB-C–connected gear. 100W cables will continue to be recognized and offer up to that wattage; less-expensive cables generally not intended for laptop charging can instead opt for 60W.

A spokesperson for the USB-IF, Joe Balich, wrote via email that the group had just recently pushed out these updates after years of changing and expanding branding and labeling. With these changes, USB-IF drops its now-obsolete SuperSpeed label.

Balich said, “We encourage our members and manufacturers overall to follow our updated Language Usage Guidelines when describing and marketing their Certified USB solutions to general consumers.” The membership group itself doesn’t enforce branding because it doesn’t have any big sticks it can wave: the group is run by a collection of nearly all the major computer, mobile, cable, charger, and peripheral manufacturers, and they don’t impose those sorts of rules on themselves. The value of simple, consistent marketing is supposed to be its own reward.

You can see the old labeling in action on the Mac Studio. Apple describes the desktop machine as having “four Thunderbolt 4 ports,” which it then defines as supporting “Thunderbolt 4 (up to 40Gb/s), DisplayPort, USB 4 (up to 40Gb/s), USB 3.1 Gen 2 (up to 10Gb/s),” plus “two USB-A ports (up to 5Gb/s).” (The reason for that very specific language? Those ports support USB 3.1 Gen 2, which offers a maximum of 10 Gbps, not 3.2 Gen 2×2, which would allow 20 Gbps. A slightly different controller would have been required for the 20 Gbps variant of USB 3.x.)

If Apple adopted the new USB guidelines, it could trim these definitions and say the Mac Studio had four USB-C ports that support Thunderbolt 4, USB 40Gbps, USB 10Gbps, and DisplayPort, plus two USB-A ports with USB 5Gbps. That seems simpler to me! Apple could leave the “40 Gbps” parenthetical on Thunderbolt 4 or footnote the rate. (The fact that Apple supports either 10 Gbps over USB 3.1 Gen 2 or 40 Gbps over USB4, which is backward-compatible to 20 Gbps rates over USB4, is a whole other bit of confusing circuitry in the Thunderbolt/USB controller chips.)

After writing an entire book about cable and standards complexity, Take Control of Untangling Connections, I can’t express how glad I am to see a straightforward story: a single number, simplified logos, and less frustration for users.

Active Cables Make a Return, Along with Improvements

There’s one remaining nit with USB standards surrounding passive and active cables, with changes that appeared with USB4 and another upcoming change in the recently announced USB 80Gbps. Compared to passive cables, active cables have additional circuitry that makes it possible to maintain the cable’s maximum possible throughput over longer distances. In the past, you could purchase either passive or (more expensive) active Thunderbolt 3 cables, but you would be hard-pressed to look at the two kinds side by side and know which was which—and thus which could perform better.

However, the existing flavors of USB4 can’t access the “active” benefits: you can get 40 Gbps only using cables up to 0.8 meters (31.5 inches) in length. That’s a small improvement over Thunderbolt 3’s 0.5 meters. (Some makers claim they have 1-meter active USB4 cables, but I haven’t tested any yet.) Beyond that length, what we should properly call a Thunderbolt 4/USB4 cable remains limited to the same 20 Gbps as Thunderbolt 3. If you knew that, pat yourself on the back—I had missed that distinction partly because there aren’t many USB4 40 Gbps devices on the market, and I own none.

When we start getting USB4 80 Gbps controllers—the hardware in computers and peripherals that handles communication—they come with a magic upgrade: your existing Thunderbolt 4/USB4 cables will suddenly carry 40 Gbps between two 80 Gbps controllers as long as they’re 2 meters (6.6 feet) or shorter. The new controllers are more efficient at carrying data over longer distances without having to tap into the active circuitry in long Thunderbolt 4 cables. You get a cable upgrade without changing your cable. This kind of free improvement to existing hardware is unusual.

If you want USB4’s full 80 Gbps over cable runs longer than 0.8 meters, you will have to purchase new active USB4 cables for that updated standard. These new cables will be compatible with Thunderbolt 4.

Cable Matters announced a 3-meter (9.8 feet) active USB4 cable in January 2022 that’s supposedly fully Thunderbolt 4-compatible, but as of now, the $69.99 cable is marked out of stock, and I can’t find any evidence it ever shipped. Possibly, the cable will be retooled or relabeled for USB4 at 80 Gbps.

At the moment, the gold standard for the greatest compatibility and least fuss remains the Thunderbolt 4/USB4 cable, which is technically active for Thunderbolt 4 and passive for USB4 (see “OWC Releases Affordable Thunderbolt 4 Cables,” 17 March 2022). You’ll get the highest throughput with that cable compared to any other in nearly every case. A standard Thunderbolt 4 cable will carry Thunderbolt 4 at 40 Gbps at any length, USB4 at 40 Gbps if up to 0.8m, and USB4 at 20 Gbps at longer runs. If you need 80 Gbps over USB4 in the future, you’ll have to budget for more expensive cables when it arrives.