Former U.S. Vice President Al Gore, whose documentary film “An Inconvenient Truth” won an Academy Award (or “Oscar”) and who himself won an Emmy Award for his Current TV channel, last week added the ultimate award to his resume. The Norwegian Nobel Committee announced that the 2007 Nobel Peace Prize would be shared between Gore and the Intergovernmental Panel on Climate Change. Such announcements are normally outside what we cover in TidBITS, but both Gore and his film are deeply connected to Apple and the Mac industry.

In fact, while we were hoping for other news from Apple’s PR machine (see “Leopard Slated for October 26th?,” 2007-10-04), they instead spent the day touting Gore’s achievement, customizing Apple’s home page and linking to multiple news reports on the Hot News page. The one-time politician, named to Apple’s board of directors in early 2003, has frequently been linked to the company’s products. He has for years been an avid user of Apple’s Final Cut Pro software, and he used Keynote to assemble the material presented in “An Inconvenient Truth.” 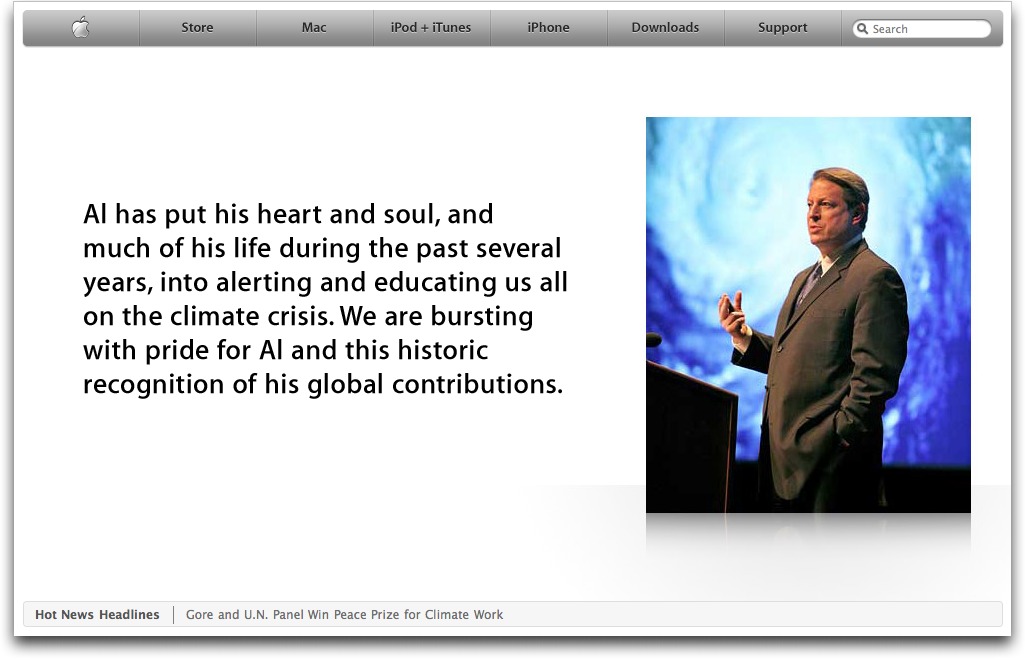 Staff Blogs Tech News
Cookies & Privacy: We wish we were talking about chocolate-chip cookies here, but our Web site—like nearly all others—relies on a few minor digital cookies. Various laws around the world require us to tell you that fact, so consider yourself informed, if not nourished. By continuing to use this site, you agree to our use of these cookies. Cookie and Privacy Notice