It’s been a long time in coming, but Sling Media’s SlingPlayer Mobile for iPhone and iPod touch is finally available in the App Store. Nearly a year after we saw a proof-of-concept version during WWDC (see “SlingPlayer Mobile Would Drive Slingbox Owners to iPhone,” 2008-06-16), the handheld placeshifting software enables users to watch video from their Slingbox devices while away from their televisions. Unfortunately, the $30 app allows video viewing only on a Wi-Fi network connection, not on a cellular connection such as AT&T’s 3G network. 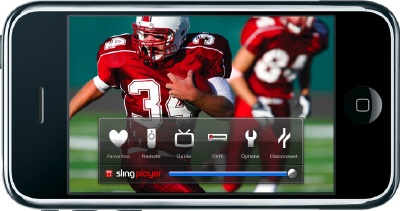 As Apple has proven, to the surprise of handheld video naysayers, the iPod touch and iPhone are great platforms for watching video. iMovie makes it easy to put homemade videos on your handheld, YouTube was one of the first apps on the platform, and of course iTunes offers video podcasts as well as TV shows and movies for rental or purchase.

For those who already have plenty of video to watch, perhaps stored on an Apple TV or recorded on a TiVo or other DVR, but aren’t home to watch it, SlingPlayer offers the opportunity to watch their own TV, remotely. (You’re not limited to recorded video; a Slingbox and SlingPlayer are great for watching live events, such as breaking news coverage or a sporting event available only locally, when you’re not in front of your TV.)

Neither Sling nor Apple is saying a word, but it appears that AT&T, in its unique iPhone partnership with Apple, has insisted that video streaming to an iPhone not be allowed on its network. Considering SlingPlayer Mobile has already been available for Palm OS, Windows Mobile, and Symbian handhelds, running on AT&T’s and other companies’ cellular networks, refusing to allow the same software to work on the same cellular network on another handheld comes across as petulant. Presumably, AT&T is exercising that authority on the iPhone because it’s the only platform where they have any say in the matter.

In a statement, AT&T asserted that SlingPlayer Mobile “would use large amounts of wireless network capacity,” and “could create congestion and potentially prevent other customers from using the network.” They add that “applications like this, which redirect a TV signal to a personal computer, are specifically prohibited under our terms of service,” neglecting to mention that that provision of their terms of service is a recent addition. The company considers “smartphones like the iPhone to be personal computers,” but never gets around to explaining why a BlackBerry or Palm Centro doesn’t fall into the same category.

AT&T also stressed that iPhone owners in the United States get free access to the company’s 20,000 Wi-Fi hotspots, including at many Starbucks, McDonalds, and Barnes & Noble locations, as well as numerous hotels and airports. But, in a sign the left hand doesn’t know what the right hand is doing, an AT&T Customer Care representative responded to a customer’s concerns about the restricted SlingPlayer functionality by saying, “Please contact Apple regarding the restrictions.”

The trouble is, an iPhone video placeshifting app you can use only while on a Wi-Fi network is extremely limiting, and defeats the purpose of an online-anywhere handheld with “unlimited” Internet access. Commuters on trains and buses who enjoy rock-solid 3G cellular Internet access will be out of luck, as will those who choose to skip the hourly or daily Wi-Fi charges at coffee shops or in hotels. Creative users who carry their own Wi-Fi bubble with them, thanks to Novatel’s battery-powered MiFi personal hotspot, will find that the 5-gigabyte monthly cap on the $60 per month Verizon Wireless service for the device (the same pricing as their cellular
broadband devices designed for laptop use) will barely cover an hour a day of remote TV viewing at the 500 Kbps streaming rate the SlingPlayer Mobile software supports.

We’re less worried about Sling Media’s decision to say they officially support only the current Slingbox Pro, Slingbox Solo, and Slingbox Pro HD models for use with SlingPlayer Mobile for iPhone – though, unofficially, earlier models work. This is an improvement over the company’s earlier stance that the software would work only with the current models; while Sling Media doesn’t want to promise earlier models will always work with future software versions, it opted not to arbitrarily block early adopters from continuing to use their existing Slingboxes as long as they keep working. (The company also mentioned its Slingbox Upgrade Program, offering a $50 discount on the price of new
models to owners of old ones.)

At $30, SlingPlayer Mobile for iPhone is one of the priciest apps in the App Store. (It’s the same price as SlingPlayer Mobile for BlackBerry, Palm OS, Windows Mobile, or Symbian, but that’s contrasted with the free SlingPlayer applications for Mac OS X or Windows.) While I love what we’ve seen of this app so far, and as a Slingbox and iPhone owner myself, it seems like a natural pairing, I suspect the combination of high price and limited functionality will stop many potential buyers from grabbing the software. Worse, it will make it less likely that those who own a Slingbox or an iPhone, but not yet both, will buy the other.

iPhone, iPad, & iOS Staff Blogs
Cookies & Privacy: We wish we were talking about chocolate-chip cookies here, but our Web site—like nearly all others—relies on a few minor digital cookies. Various laws around the world require us to tell you that fact, so consider yourself informed, if not nourished. By continuing to use this site, you agree to our use of these cookies. Cookie and Privacy Notice