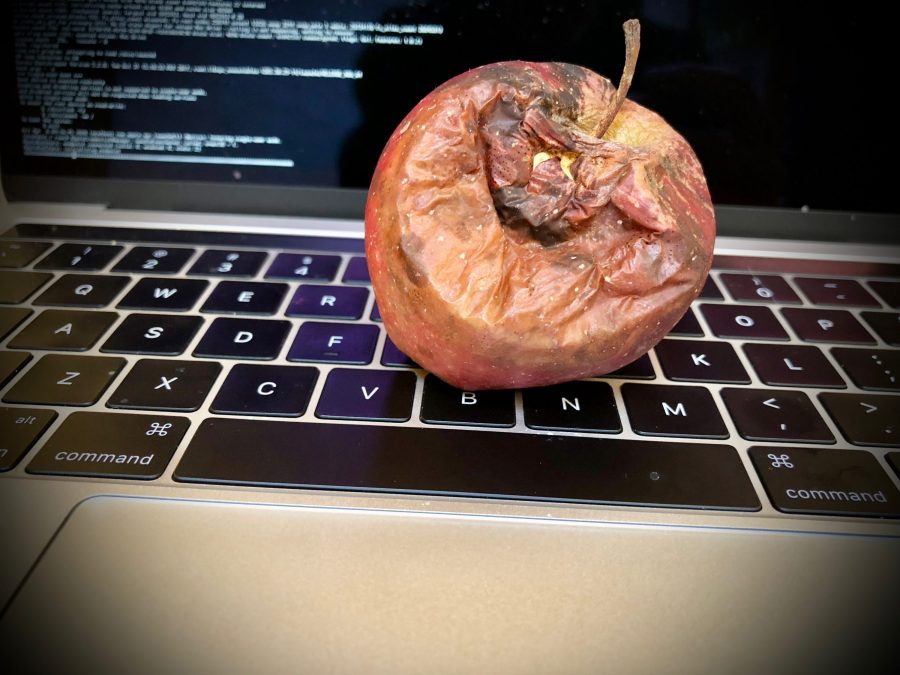 Welcome back to my Bad Apple column, in which I explore aspects of the Apple experience that are broken and need fixing. Today I want to focus on Reminders and how it integrates with Siri. I know what you’re thinking. “Siri? Couldn’t you pick on someone your own size?” But, in this case, Siri usually works well. It’s Reminders that is messing up regularly and unnecessarily. Here’s the story.

I’ve tried every to-do list and task manager under the sun. I’ve read David Allen’s Getting Things Done and attempted to implement its advice. No app or strategy has stuck once I get busy and fall back on my generally reliable memory rather than wasting time fiddling with projects and priorities.

However, over the past few years, I’ve discovered that one of the few things Siri can do reliably is create to-dos in Reminders. While driving down the road in front of our house today, I said, “Hey Siri, remind me to email Jose about his beehive cover at 2 PM.” (A friend keeps some beehives in our meadow, and a high wind last night had knocked one of the covers ajar.) Even though Do Not Disturb While Driving was on, Siri reported that it had created the reminder. Then, at 2 PM, a notification alerted me to email my friend, so I did so and then marked the task as completed in Reminders. I use this feature all the time on my iPhone and Apple Watch, and less frequently on my iPad and Mac. 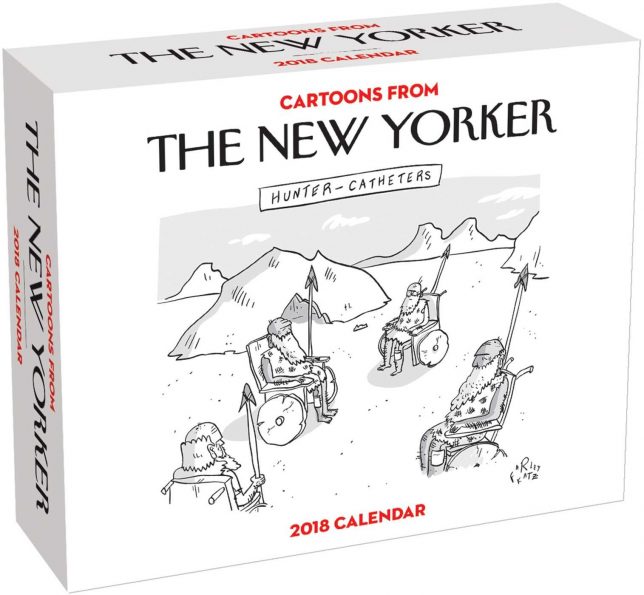 I have one other to-do list system that works for me. Laugh if you want, but it relies on old sheets from the New Yorker cartoons daily calendar — you know, one of those calendars with a square piece of paper that you rip off every day to reveal the next cartoon or funny saying. The backs of these daily calendar pages make great scrap paper (at least the ones that don’t put the cruddy “Daily Extra” on the back— Andrews McMeel, I hate those). On Saturday mornings, I’ll often pull out an old cartoon and jot down things I want to remember to accomplish for the weekend. It’s satisfying to cross things off as I do them, and to toss the entire sheet into the recycling when I’m done. The only problem is that I seldom finish everything, so I have stacks of these sheets with just one or two items on them. Bad Adam! 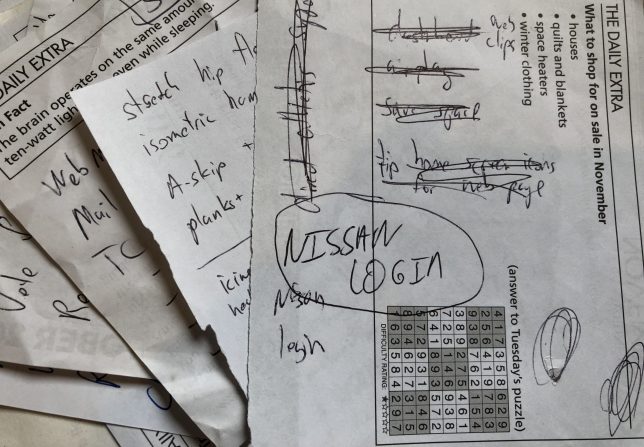 Only recently did I figure out how to move this system into Reminders and mimic a single list that shows me just what I need to do today. I didn’t want to use the default Reminders list, where reminders created by Siri’s “Remind me to take the ham out of the freezer tomorrow at 9 AM” command go. (You can change this in Settings > Reminders, assuming you can find it, given the topic of “Bad Apple #2: Alphabetize Settings in iOS,” 21 February 2018.) That’s because I have a fair number of those timed reminders for future tasks, and I only want to see untimed reminders of the things I have to accomplish sometime today.

So I created another list and called it “Pocket List.” The name proved to be important because Siri has to understand it as a list name in the phrase “add to X list,” and not some other part of the command. I first tried calling it “Today,” but that confused Siri completely. A few other names failed in other ways. Now, when I want to add a task to my virtual sheet of scrap paper, I can tell Siri, for instance, “Add to Pocket List write Bad Apple column.” Anytime I want, I can view the list on my iPhone with “Show my Pocket List” or look at it in Reminders on my Mac. Then it’s easy to see what to do and mark off items I’ve completed. (Since I still don’t always finish all my work, I have another list called Feeder List that stores tasks that don’t get done or aren’t a high enough priority for any given day.)

As far as creating the task and adding it to the list called Pocket List, Siri and Reminders generally do a good job, regardless of where I invoke Siri. There was one amusing mistake where Siri on my Mac must have been thinking in Klingon, and tried to add my task to Pa’akai List, which I assume means something like “Enemies to Eviscerate Today.” (In reality, it might be Japanese for “rice” or Hawaiian for “seafood.”) 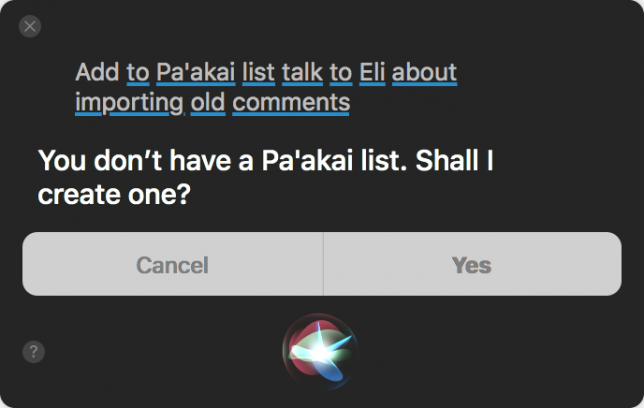 Here’s the problem. Even though Siri usually transcribes what I’ve said correctly, or close enough for government work, Reminders is categorically disdainful of verbs, and drops them often, if not consistently. For instance, “Add to Pocket List call DuPont about recycling Tyvek” turns into a terse reminder titled “Recycling Tyvek.” And sometimes Reminders drops words off the end too, as in “Add to Pocket List talk to Lauri about adding icons to Watchlist,” which turns into the haiku-like “Adding icons.” Bad Apple! 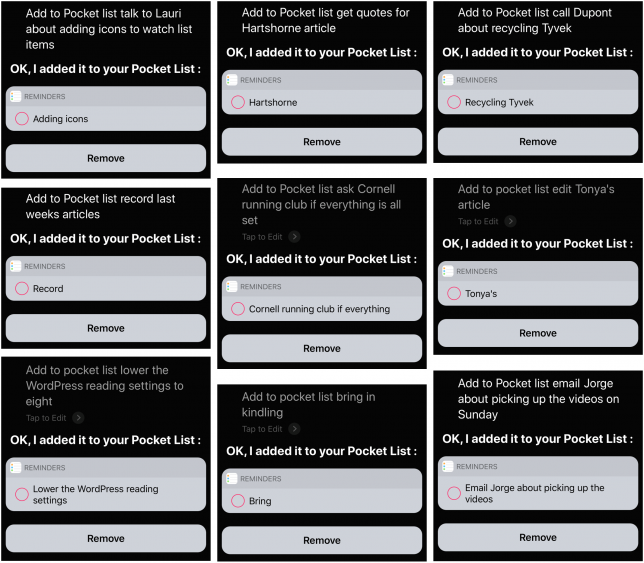 Many of these verbs aren’t exciting — talk, get, call, ask, edit — but they mean something to me. There’s a big difference between “write” and “edit.” And the words that get dropped off the end are usually rather important, and losing them can make the entire reminder meaningless, as when “Add to Pocket List bring in kindling” becomes “Bring.”

In a few cases, it’s understandable — if still wrong — that Reminders might lose words. “Add to Pocket List email Jorge about picking up the videos on Sunday” might seem as though I was scheduling it for Sunday. But in fact, I wanted to be reminded before Sunday to send email about running the errand on Sunday. And Reminders did not try to schedule the event; it just deleted “on Sunday.”

What’s so frustrating about this behavior is that it’s entirely unnecessary. Siri has, for the most part, realized that I want to add an item to a list in Reminders called Pocket List, and it has transcribed my words correctly. So why is Reminders going rogue and deciding that to-do items shouldn’t have verbs, or sometimes objects?

Ironically, while writing this article, I stumbled on the workaround that has eluded me for months. I was thinking about how Siri and Reminders seldom mess up when I add a timed task to my Personal To Do list with “Remind me to…” So I re-tested a number of the Reminders failures above, and wouldn’t you know it, changing my trigger phrase along the lines of “Add to Pocket List remind me to call DuPont about recycling Tyvek” caused Reminders to do much more of what it should and use all the words after “remind me to.” Most of the time.

Nonetheless, there is no reason that Reminders should drop so many words in text that Siri has recognized properly, so I’m still chalking this up as an errant behavior that Apple should fix.