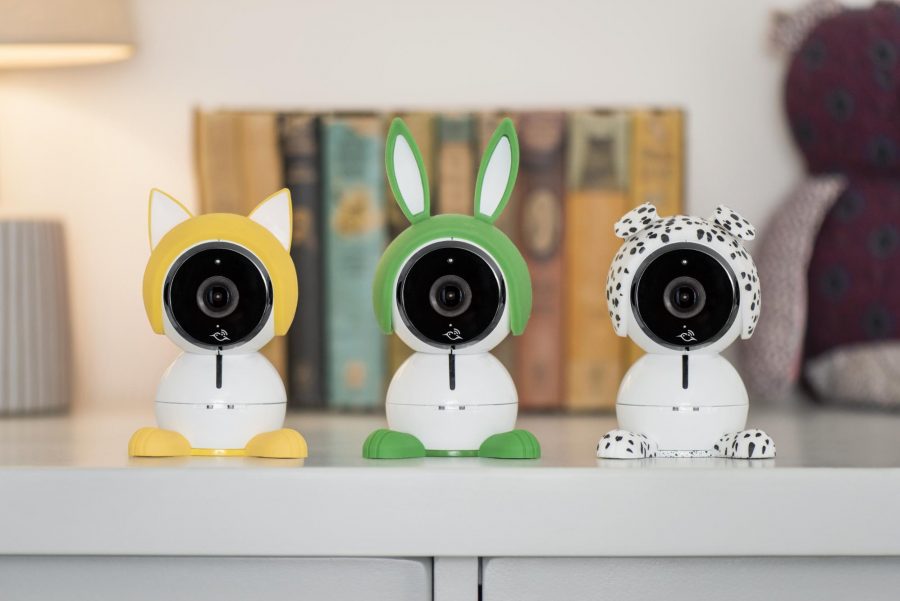 The Arlo Baby surveillance-style video camera is a rare beast—it is among only a handful of HomeKit-ready cameras on the market. In fact, it’s one of only three HomeKit cameras listed on Apple’s HomeKit product directory.

Even so, the Arlo Baby stands out. While Logitech’s Circle 2 and D-Link’s Omna 180 Cam HD are positioned as general-purpose surveillance cameras, the Arlo Baby is more specialized. As its name suggests, it’s a souped-up baby monitor with a design and features intended for parents with kids in cribs. Heck, it even includes whimsical animal accouterments to make it more nursery-friendly.

Initially, all of this made me dubious about the product. After all, my “baby” is now in college, so I’m focused on general-purpose security cameras, not baby monitors.

At $199.95, the Arlo Baby is also the most expensive HomeKit camera on the market, which might give prospective buyers pause, especially since a host of decent non-HomeKit cameras are available at far lower prices (see “Wyze Cam Pan Helps You Watch Your House for $30,” 26 July 2018, and “$20 WyzeCam Security Camera Is Almost Too Good to Be True,” 28 February 2018).

For those who want a HomeKit camera, though, there’s good news. First, the Arlo Baby is not that much more expensive than a Circle 2, which runs $179.95, or the Omna at $129.95. In addition, Apple sells the Arlo Baby at a $10 discount—without the critter accessories.

Unfortunately, there is also bad news here for HomeKit enthusiasts. In my testing, I stumbled on notable gaps in the camera’s HomeKit capabilities. But the Arlo Baby makes up for this deficiency with unique features that are not just for parents, and such capabilities increase the camera’s practical value while easing the sticker shock.

Let’s get the superficial stuff out of the way: the Arlo Baby sure is cute.

It consists of two white spheres, one atop the other, making it look a bit like a snowman. The upper sphere has the camera on the front, along with a rear section that glows. That bottom sphere is split into upper and lower hemispheres, which permits the top one—along with the camera above it—to rotate clockwise and counterclockwise. 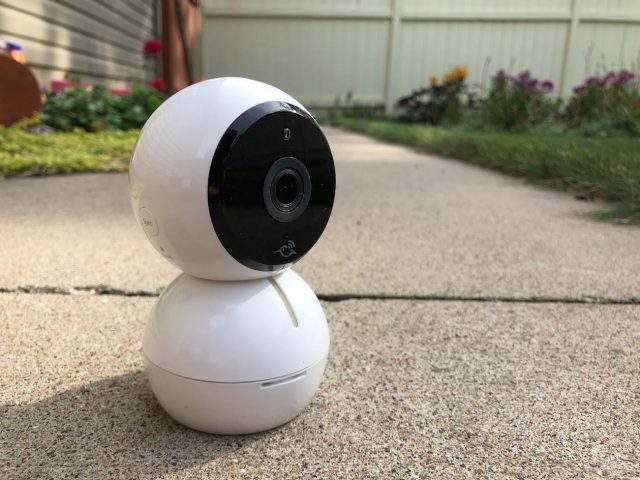 My review unit came with decorative accessories intended to make the camera look like a gray bunny. A sort of rubber bonnet that sprouts animal ears clamps onto the top, and a plastic disk with attached wabbit feet screws onto the bottom of the Arlo Baby to give it added stability as well as whimsy. If you want to go crazy with the critters, additional accessory kits—green bunny, which I also received, plus gray puppy and orange kitten—are available for $19.99 apiece. 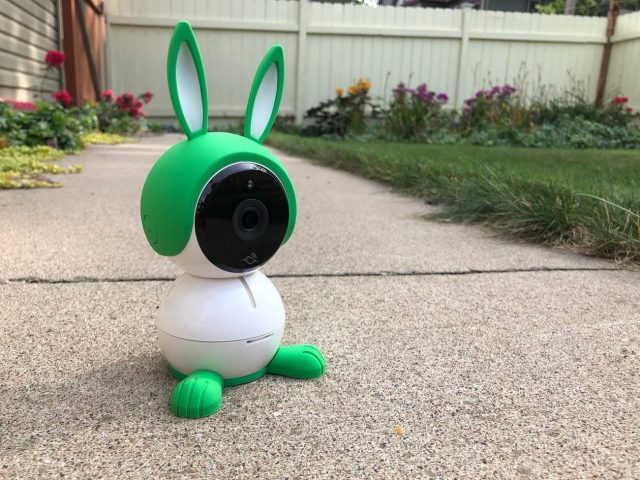 Arlo also sells a $39.99 stand that you can put on a table or mount onto a wall or ceiling—with the Arlo Baby securely attached. 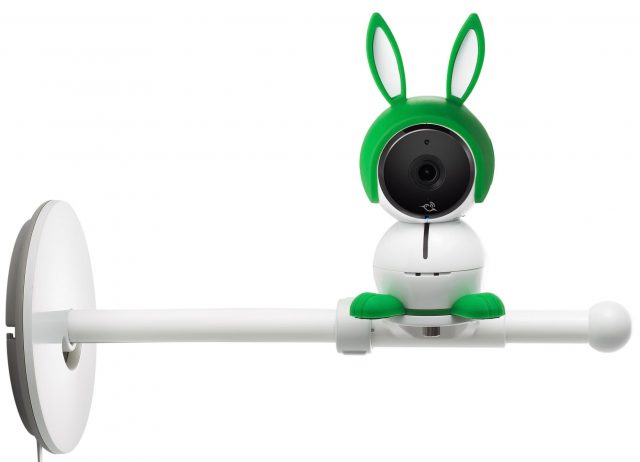 Setup was the most frustrating part of my Arlo Baby experience. Most of my attempts failed, with repeated factory resets required before I could try again. To make matters more confusing, there are two ways to set up the camera—you can use an app on your iPhone or a Web browser on your Mac. Both approaches assume that you have set up an Arlo account and that your phone or computer is on the same Wi-Fi network as the camera will be.

The iPhone option proved the most problematic. The Arlo app is supposed to detect your camera, connect it to Wi-Fi, and add HomeKit support via a series of screens, but error messages repeatedly caused this process to fail.

The browser-based setup worked better. I was prompted to provide my Wi-Fi network name and password and to press a Sync button on the side of the camera. I then used the Arlo Baby’s camera to scan a QR code that appeared on my Mac screen. Chiming pleasantly, the device synced up. I gave it a name, and I was done.

I still had to turn on HomeKit manually. I did this the standard way, using Apple’s Home app to add the camera as an accessory (see “A Prairie HomeKit Companion: Setting Up Accessories and Rooms,” 16 January 2017). Arlo puts a HomeKit setup code on the back of its instruction pamphlet. You’ll also find the setup code on the bottom of the camera if you remove the animal feet.

If you’re paying a lot for a surveillance camera, you want the video quality to be decent. The Arlo Baby doesn’t disappoint, with acceptable 1080p video that gave me a clear view of my porch and the street beyond. This compares favorably to other security cameras I’ve tried. The video isn’t pristine, but it more than does the job.

The Arlo Baby, like other security cameras, can detect motion and sound that trigger automatic recordings. You can set the recording duration from 15 to 120 seconds, or until activity stops. Alternatively, you can set the Arlo Baby to take pictures when motion or sound is detected.

If you want to be notified about motion or audio events, configure the app to send you an email or a push notification. The detection sensitivity is adjustable, and you can turn either video or sound detection off.

Manual video recording or snapshot shooting also are options if you’re watching the live feed and want to document something you see.

All recorded content ends up in the app’s library, where you can browse by month and day. Recordings are automatically archived online, and Arlo provides a week of free cloud storage on a rolling basis. Longer-term storage and 24/7 recording are available at an extra cost.

Live and archival video is viewable anywhere, not just on the Wi-Fi network the camera is using, enabling you to monitor your residence while shopping across town or on a trip to another country. You can do this on an iOS device, with the Arlo app, or using a Web browser. This is similar to how other Arlo video cameras work (see “A Prairie HomeKit Companion: HomeKit Security Provides Peace of Mind,” 11 September 2017).

But, with doting grandparents in mind, the Arlo Baby adds a video sharing feature that lets a friend or relative monitor the camera’s live feed. Enter that person’s first and last name along with an email address, and send an invitation. Optionally, that person can be granted control of certain camera features, such as sharing, manual recording, and video deleting.

Video does not stream automatically when you fire up the Arlo app, but you can enable that using a Quick Stream feature that will stream just when you’re on Wi-Fi, or on either cellular or Wi-Fi.

On the audio front, the Arlo Baby has a feature common to security cameras: the option to speak on your phone or computer and have the speech emanate from the camera speaker. The maker intends this as a way to soothe an infant from afar, but it’s easy to envision other uses—like a family intercom system or a way to scare off a burglar.

For those who want to continually listen in on activity near the Arlo Baby, there’s an option to stream audio without interruption on a mobile device even if it’s locked.

The Arlo Baby has a bunch of tweakable settings, including:

I’ve been a fan of Arlo cameras for a while, so I was excited when the Arlo Baby became the first in the line to gain HomeKit compatibility. My enthusiasm was tempered, however, when I discovered gaps in its HomeKit feature set.

It did perform one function that, for me, is essential: showing up as a video-window favorite on the iOS Home app’s main screen (and, soon, in the Mac version of the Home app when macOS 10.14 Mojave comes out in the coming weeks).

This could be important if you have deployed multiple HomeKit cameras—perhaps from more than one manufacturer, as I have—and want to see all the video windows in one place. 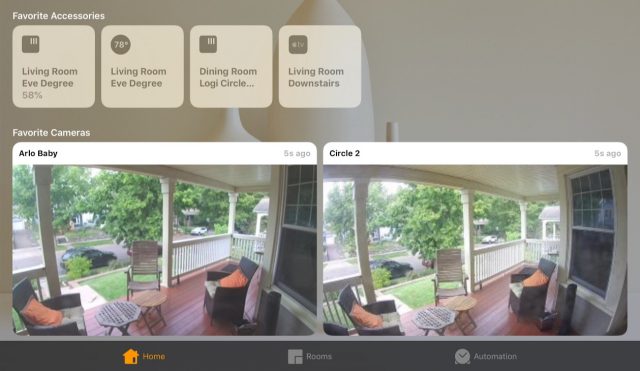 But what if you want to make the Arlo Baby part of one or more HomeKit automations that involve other, non-camera gear?

That’s where I ran into trouble. I wanted to set up automations that made certain things happen, such as turning on lamps connected to HomeKit-compatible wall outlets when the Arlo Baby detected motion (see“A Prairie HomeKit Companion: Automating Your Home,” 10 February 2017). Maddeningly, when I tried to set up that automation, the Arlo Baby wasn’t one of the listed sensor options.

Those who use Siri can get to the Arlo Baby video window in the Home app just by asking for the Home room the camera is in. This proved mildly problematic for me, though, since I had to tap the video to jump-start the live streaming. The alternative, asking Siri for the Arlo app, pulled up a live-streaming window with no tap required.

There are a few other things to keep in mind when using the Arlo Baby in a HomeKit capacity:

As a HomeKit camera, the Arlo Baby is unique in one respect. In addition to getting power from the wall using a micro-USB cable, it can work off its internal battery. No other HomeKit camera has a battery. My understanding has been that Apple requires HomeKit cameras to use only corded power, so the battery-powered Arlo Baby is a pleasant surprise.

Don’t get too excited about the battery option, however. Although the maker claims hours of battery life, the Arlo Baby conked out on me in less than an hour.

In addition to HomeKit, the Arlo Baby supports other automation systems, such as Amazon’s Alexa and Google’s Assistant, if that’s how you roll.

The Arlo Baby has a few unusual features that add to its allure—even for those who don’t have babies. These capabilities may make up for the camera’s lackluster HomeKit support. They include:

The Arlo Baby is not for everyone, given its steep cost and potentially superfluous features. Parents with infants are more likely to get excited about it due to its baby-friendly capabilities, and therefore more willing to shoulder its extra cost.

Although its promised HomeKit compatibility is tempting, limitations are significant. Some HomeKit enthusiasts might pass on the Arlo Baby since Apple’s automation technology is not yet fully baked in. Arlo has not said when HomeKit improvements might appear.

But the Arlo Baby is a decent security camera for those who don’t mind paying a premium. Its unique features, which have a variety of non-baby-related uses, could make it worthwhile.