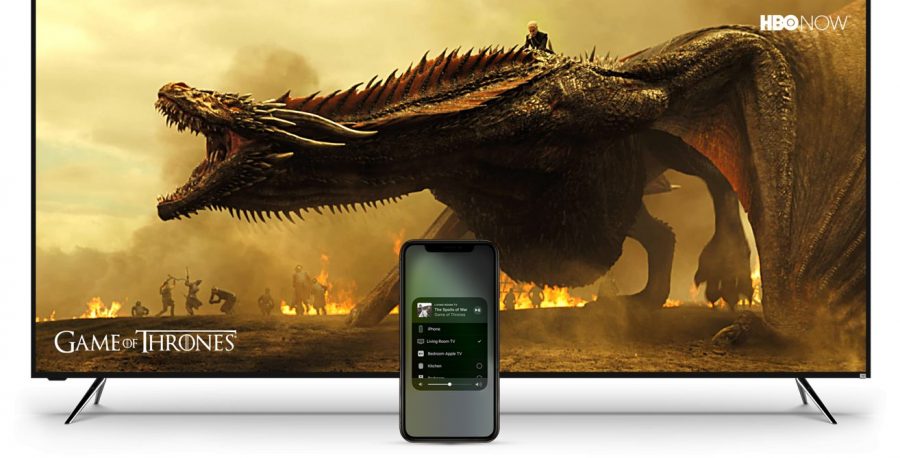 Something curious is happening in TV land. First, Apple announced a partnership with frenemy Samsung to bring iTunes movies and TV shows, as well as AirPlay 2, to Samsung smart TVs. Now Apple has inked deals with LG, Sony, and Vizio to bring AirPlay 2 and HomeKit support to their TV sets.

What does this mean, exactly?

For TVs that support AirPlay 2, it means you’ll be able to share iOS device screens to them or “beam” content like movies and music directly to them from iOS or iTunes—just like you can now with the Apple TV.

The HomeKit story is a bit more interesting: supported TVs will become HomeKit devices, and as such, you’ll be able to turn them on and off and change their inputs with Siri or Apple’s Home app. You’ll also be able to create HomeKit scenes with actions to control these TVs. So you could have a Movie Night scene that dims the lights and turns on the TV with a single command. (For more on what you can do with scenes, see “A Prairie HomeKit Companion: Core Concepts,” 3 November 2016 or my book, Take Control of Apple Home Automation.)

Here are the details of each TV vendor arrangement, in the order they were announced:

What’s curious is how only Samsung gets iTunes Movies and TV Shows, but Samsung is the only vendor not providing HomeKit support. Despite that confusion, these announcements may be great news for Apple users who own or plan to buy a supported TV set, but what do they mean for the rest of us, and for Apple’s TV plans going forward?

As someone who’s been watching the Apple TV space for years (I literally wrote the book on it—Take Control of Apple TV), my gut reaction is that these announcements may mark the end of the Apple TV as a standalone hardware product. Not now, probably not next year, but I believe that Apple will eventually phase out the Apple TV.

Why? Because the future isn’t a separate box, it’s having the smarts baked directly into your television. Back when I wrote the first edition of Take Control of Apple TV, I dismissed the smart TV user experience as dramatically inferior to that of the Apple TV—and that was true at the time. But over the years, smart TV interfaces and performance have improved significantly, and you can’t beat the convenience. Would you rather turn on your TV, switch inputs, grab the Siri Remote, and open the Netflix app, or just press the Netflix button on your TV remote?

Television is an inherently lazy technology. It’s the screen you stare at when you want to turn your brain off. It’s the device where users tolerate friction the least. “I don’t care about HDMI-CEC or HDR. I just want to watch football, dammit!”

While Apple was betting on a box, it turns out that the much-mocked analyst Gene Munster was right in claiming that the better bet was a smart set. Apple could still ship its own TV set, and I think there’s a place in the market for it, but Apple remains reluctant, probably because TVs are a notoriously low-margin business—Vizio CTO Bill Baxter said the industry gets 6% margins—Apple’s overall gross margin is about 38%.

With Apple trailing on the TV hardware front—the Apple TV commands only 15% of the market, behind Amazon and Roku—the company’s best chances lie in the service end. But Apple is backed into a corner there too, because Movies Anywhere reduced whatever lock-in advantage Apple had by syncing iTunes purchases from major studios to your accounts on Amazon, Google, and other platforms (see “Movies Anywhere Frees Your Films From Platform Lock-In,” 14 October 2017).

Rumors are flying hot and heavy about some sort of TV service from Apple, but exactly what content would be on it, how much it would cost, or what platforms it would be available on are all still mysteries. Jokes about Planet of the Apps aside, Apple has made some impressive, if confusing, content deals. Tim Cook recently promised more services in 2019, and while he wasn’t specific, a TV service seems imminent.

These expansions into offering support for competing TV platforms suggest that Apple is looking at targeting its service to the broader market beyond just Apple devices. That would mean Apple plans to go head-to-head against Netflix and Hulu, along with Disney when the Mouse’s streaming service launches later this year.

On the more practical level, I expect this combination of AirPlay and HomeKit integration with smart TVs to look very similar to how Google Home and Chromecast interact. I can tell Google to shut off my TV or play a title from Netflix or Google Play, and it seems like Apple’s new integrations will be able to do similar things. It’s one of Google’s more useful voice-driven features, and I’m surprised Apple didn’t do something similar sooner.

Don’t fret about the future of your Apple TV just yet. For now, it’s still very much a necessary component of the iTunes puzzle, and it will work just as well on a new smart TV as it does on any current model. And it won’t be gathering and sharing data about you—that’s why dumb TVs are more expensive than smart TVs.