We’ve spent years reading the tea leaves to try to figure out Apple’s TV vision. Every now and then, Apple gives us a glimpse, as it did in 2015 when Tim Cook declared that the future of TV was apps (see “The Fourth-Generation Apple TV Is Coming at Last,” 9 September 2015). Unfortunately for Apple, apps didn’t pan out as the future of TV, so Apple put TV on the back burner until it could come up with a new approach.

Now we know what Apple’s latest TV plan is, and it’s a doozy, consisting of six parts:

Many observers have mixed up the Apple TV app, Apple TV Channels, and Apple TV+. Yes, it’s confusing, but they’re all distinct offerings.

Apple said it would roll out the new Apple TV app in May 2019. We presume it will come with at least some of the new channels and services. Likewise, the Apple TV app for third-party devices will launch about that time, starting with Samsung.

From what we’ve seen of the new TV app, it doesn’t look much different than the old one. You can still use it to access your purchased iTunes movies and TV shows. One nice new touch is a dedicated Kids section, which lets children browse shows by character, much as Netflix has allowed for years. 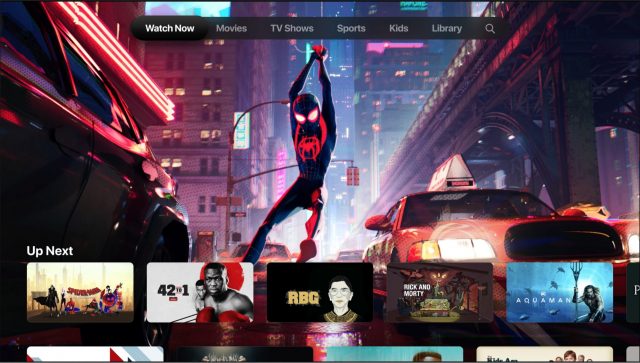 The new TV app will have a strong focus on personalization. A new “swipe” feature lets you effectively channel surf between shows, the difference being that these shows will be ones that Apple’s algorithms think you will like. We’ll see how well it actually works once Apple releases the app in May.

Apple said very little about Apple TV Channels, merely listing a few partners and emphasizing that you’d be able to pick and choose among them. No mention was made of pricing, possible bundle discounts, or much of anything else.

As a result, it’s hard to say if Apple TV Channels will be interesting, or cheaper than subscribing to the likes of Showtime and Starz separately. At the moment, it looks as though Apple intends Apple TV Channels as merely a front-and-center reminder to Apple TV users that they can subscribe to more content directly (and give Apple a cut).

As with the Apple TV app, we’ll likely learn more in May, and then we should be able to get a sense of whether Apple is providing access to enough of a media library to compete with Netflix.

There have been endless rumors about an Apple streaming service chock full of the original content that the company has spent a reported $1 billion on so far, and Apple was finally ready to reveal what it has been working on. Well… kind of. Apple showed what amounted to a few short clips from its shows after a celebrity-packed yet awkward presentation that could best be described as “Apple’s upfronts.” Upfronts are annual springtime industry events, dating back to the early 1960s, in which TV networks announce their new shows to advertisers. 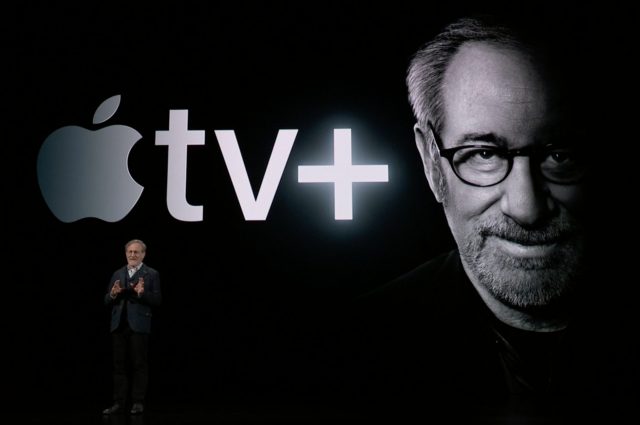 Announcing their respective projects were Steven Spielberg (Amazing Stories); Reese Witherspoon, Jennifer Anniston, and Steve Carrell (The Morning Show); Alfre Woodard and Jason Momoa (See); Kumail Nanjiani (Little America); JJ Abrams and Sara Bareilles (Little Voice); Big Bird and fellow muppet Cody (Helpsters); and the all-time queen of daytime TV, Oprah Winfrey (a pair of documentaries). It was a star-studded event that had most technology journalists yawning and scratching their heads, not in the least because, other than knowing that Apple is truly working on these rumored projects, we don’t know much more than we did before.

However, that rollout was aimed not at Apple’s usual audience of technology reporters and aficionados, but at those who work in, live for, and gossip endlessly about what Hollywood calls “the biz”—show business. That industry has been riding a hellacious roller-coaster of disruption over the last few years: just the week before Apple’s event, many entertainment world workers were laid off as Disney’s acquisition of 21st Century Fox became final. People in the biz want to know, “Is Apple for real,” “Is it going to become a major player,” and “Should I send in my resume?”

Apple emulated the traditional show business ritual of the upfront to send a message. Two messages, really. One to the bruised and insecure working people of Hollywood: “We’re here, we have a plan, we’re serious, and we have money.” And another to the Hollywood studios, streaming companies, and others hesitant to do business with Apple: “Don’t want to stream your content with us? We can make our own, and we have Spielberg and Oprah. Now do you want to do lunch?” 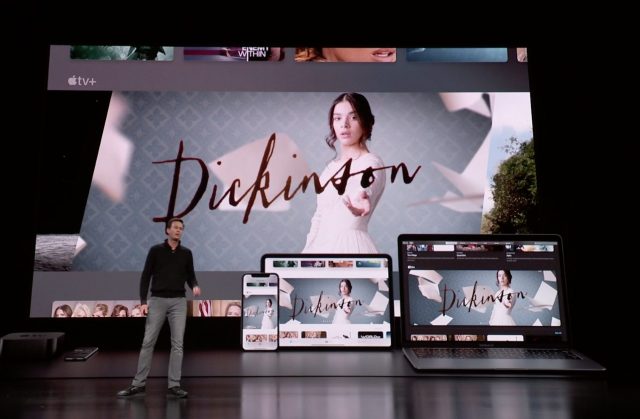 We won’t know for at least six months whether, beneath all of the Apple TV+ rollout’s phony tinsel and glitter, there’s real tinsel and glitter, but we’re not willing to bet that there isn’t. On the other hand, a comedy series about 19th-century poet Emily Dickinson starring Hailee Steinfeld and Jane Krakowski? Who gave the green light to that?

While Apple’s TV announcements were wide-ranging, there was a central theme: Apple TV isn’t merely a hardware box anymore, but a suite of services that will encompass everything related to TV, including cable and satellite TV equivalents, rented and purchased content, and whatever exactly Apple TV+ will end up being. And that’s reflected in Apple placing the Apple TV app on third-party devices.

In “Apple Opens iTunes Video and AirPlay Up to TV Rivals” (9 January 2019), Josh predicted that Apple might drop the hardware Apple TV entirely. He’s less confident about that now, not so much because of Apple’s TV announcements, but because of the Apple TV’s role in the Apple Arcade gaming service (see “Apple Announces Apple Arcade Gaming Service,” 25 March 2019).

With the point of the Apple TV hardware shifting more toward gaming, we shouldn’t expect a cheaper Apple TV “dongle-type” model anytime soon. Apple could ship a cheaper version without the $59 Siri Remote included (you’d just use your iPhone or iPad instead), but that’s been possible all along and hasn’t happened. But we do wonder now if we’ll see an Apple-branded game controller later this year, or perhaps even a gaming-focused Apple TV model.

In any case, the overall picture is clear: Apple intends to pour significantly more resources into its TV-related services, and those services will be available on the most common TV platforms. However, it will continue to offer the Apple TV HD (the new, blissfully shorter name of the fourth-generation Apple TV) and Apple TV 4K as premium products that add gaming to the mix. That’s a strategy that should make everyone (relatively) happy.

Comments About Apple Reveals Its Vision for TV