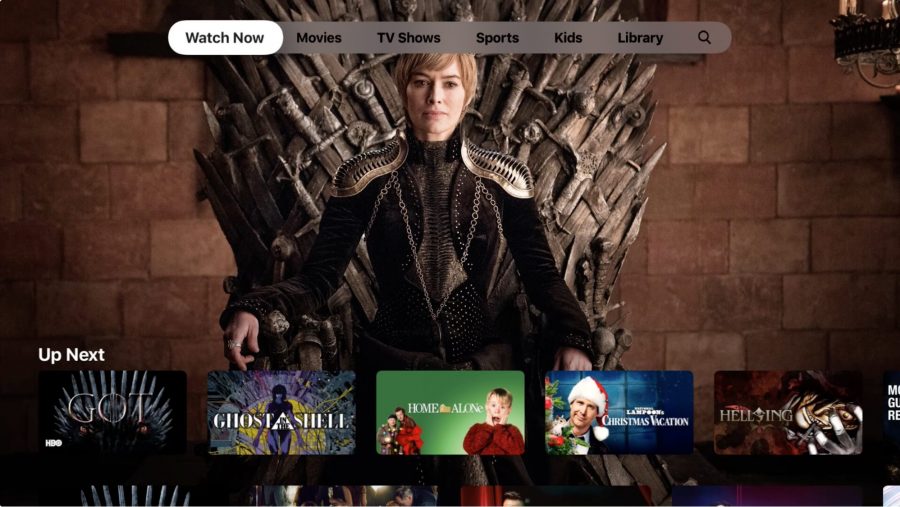 With iOS 12.3 and tvOS 12.3, Apple has introduced the new Apple TV app, which replaces the TV app (annoyingly, the app’s icon in iOS and tvOS remains named just “TV”). In reality, you aren’t going to notice much difference—there are a few design tweaks, but it’s basically the same app. In the future, it’ll host Apple TV+ and likely a variety of other Apple services, but for right now, the marquee feature is what Apple calls “channels,” which are just third-party streaming services that you can subscribe to within the Apple TV app (see “Apple Reveals Its Vision for TV,” 26 March 2019).

This isn’t anything new in the TV world. Amazon has provided a similar service in Amazon Prime for years. With Apple TV channels, you can subscribe to streaming services like HBO, Showtime, and Starz. Apple is pushing Apple TV channels because it will get a cut of the monthly subscription revenue, but you still reap some advantages to subscribing to Apple TV channels:

If you already subscribe to one of the available services, like HBO, through its own app (like HBO NOW), you won’t enjoy these benefits. As far as I can tell, there is no way to transfer such external subscriptions to Apple TV channels, though you can browse that content inside the Apple TV app, just as you were able to do in the TV app. If you want to switch your subscription to Apple TV channels, you’ll have to cancel your existing subscription and sign up through Apple TV.

Of course, there are downsides as well, chiefly that you can watch content from Apple TV channels only on an Apple TV or iOS device. You won’t be able to watch on a Mac until macOS 10.15, likely due in September 2019, and the content won’t be accessible on non-Apple devices, except smart TVs slated to get the Apple TV app or AirPlay 2 support (see “Apple Opens iTunes Video and AirPlay Up to TV Rivals,” 9 January 2019).

Apple makes subscribing to Apple TV channels easy, if not exactly obvious. Here’s how to subscribe to Apple TV channels in iOS and tvOS, and on the third-generation Apple TV. Thankfully, the process is the same on all three. Your subscriptions should sync between devices if they’re all logged into the same Apple ID.

Here’s how to find Apple TV channels to subscribe to:

You’d think Apple would provide a dedicated tab for Apple TV channels, but no, it’s just a horizontal scrolling list. There is a screen called Explore Apple TV Channels, which you can access by pressing a button a little lower in the Watch Now tab, but it’s not much better. It lets you browse through the content on channels, but you still have to pick from the horizontal list if you want to see just a single channel. 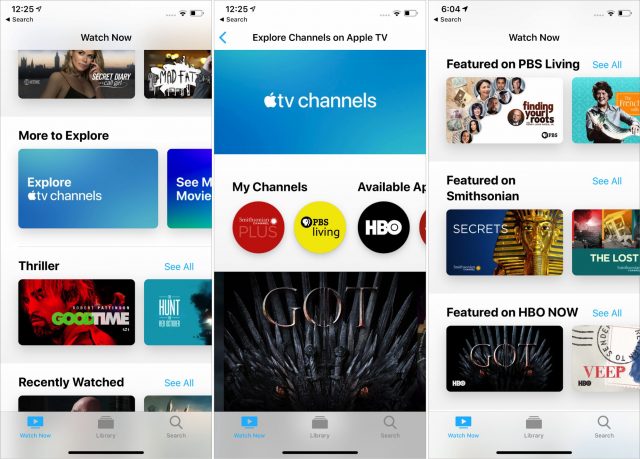 Tapping a channel lets you browse its contents before you decide to subscribe. All the channels have a 7-day free trial, which is available even if you’ve previously subscribed to the channel outside of Apple TV channels. 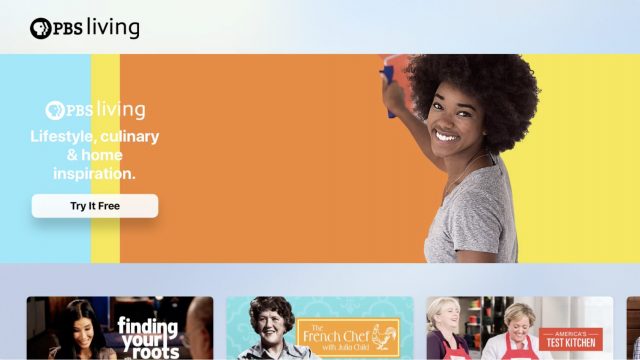 If you see a channel that interests you, tap the Try it Free button, which should be clearly presented when you first view a channel. You then have to authenticate your Apple ID, just as if you were buying an app. You may also have to agree to updated terms and conditions.

Note that the Try it Free button remains even after you’ve subscribed.

One complaint I’ve always had about the TV app, and it’s still true in the Apple TV app, is that everything is jumbled together. The Watch Now tab spreads your subscribed content all over the place. Some of it might appear in Up Next and some in What to Watch. There are usually “featured” sections for the services you subscribe to, like Featured on PBS Living.

If you want to focus on the channel you subscribed to, you need to retrace your signup steps: Go to Watch Now, scroll down to Subscribe to Apple TV Channels, and select the channel you want to browse. It’s a lousy interface, and I hope Apple improves it soon.

It can also be hard to predict what will happen when you play content from within the Apple TV app. Since it continues to support content from select third-party apps in addition to Apple TV channels, there are two possibilities:

If a title is available from several different services, all of whose apps are supported by the Apple TV app, things can get confusing. For example, pressing the Play button on Sesame Street in the Apple TV app opens it in the HBO NOW app on my iPhone, but Sesame Street is also available from several other sources, including Hulu, Amazon Prime Video, and DirecTV Now.

I’ve heard complaints from people who have had content open in the HBO GO app, even if they haven’t had that app activated in years. To work around this problem, scroll down in the show information until you see How to Watch, which shows you all the places where you can watch the show and choose the one you want. 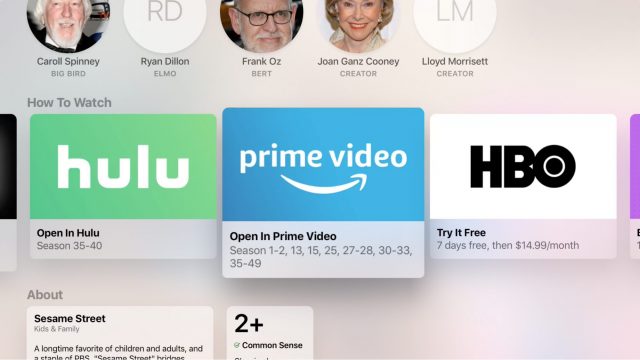 When you subscribe to an Apple TV channel, you can also download a movie or TV show for offline viewing, such as on an airplane. Pull up the show’s listing and tap the download icon, which is Apple’s standard cloud raining an arrow. 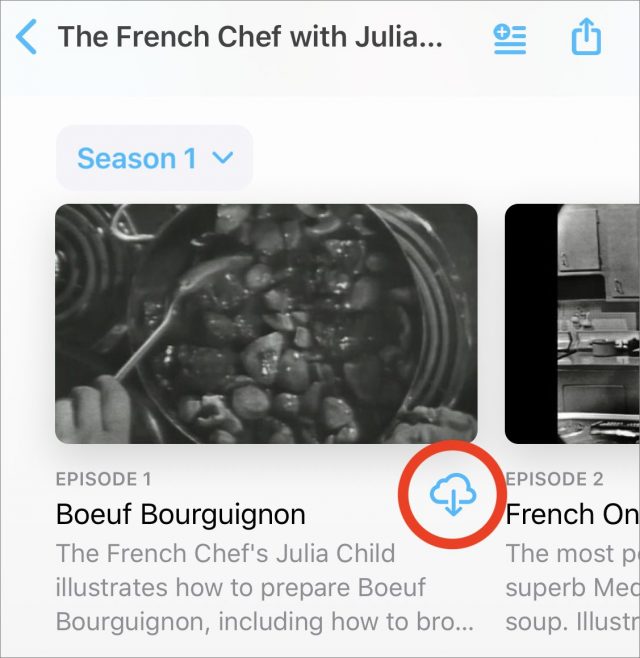 After the show downloads, you can find it in Library > Downloaded. When you’re done with a download, delete it by tapping the icon that looks like an iPhone X with a checkmark in it and then tap Remove Download. To delete multiple entries, tap Edit, select the titles you want to remove, and tap Delete. 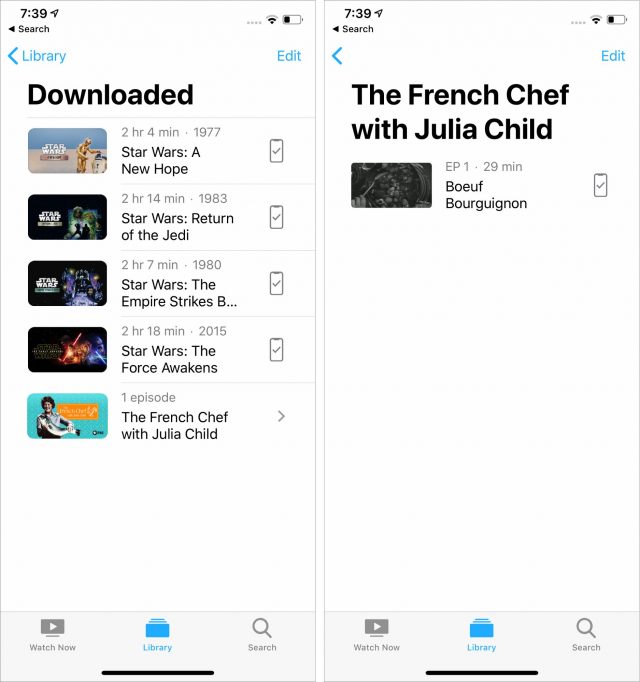 If you want to cancel a trial or subscription, you can easily do so from iOS, and even more easily from tvOS. You can’t cancel a subscription from the third-generation Apple TV, but you can do so from within iTunes. You’ll have access to the content until your subscription period ends.

Here’s how to cancel a subscription in iOS 12:

If you want to cancel a subscription from an Apple TV HD or 4K, here’s how to do that:

From a Mac, click this link to open iTunes to the Subscriptions page. Click Edit next to a subscription to see options to cancel it. 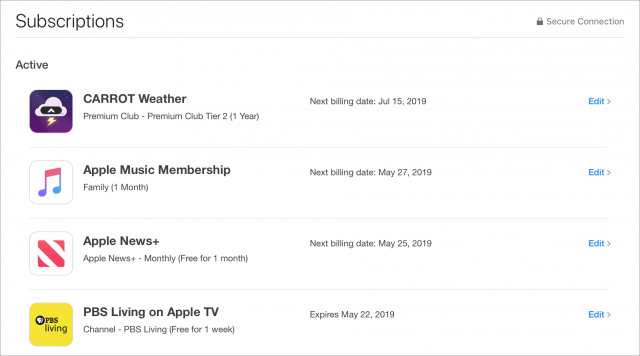 Apple TV channels are, in the end, largely uninteresting apart from some slight integration benefits of keeping multiple subscriptions within Apple’s walled garden. There aren’t even significant user interface advantages because the Apple TV app already lists the content in these channels, and Netflix remains an outsider.

That’s not to say that Apple TV channels won’t attract subscribers because Apple will be exposing many more people to these streaming services. And adding them will undoubtedly divert more money into Apple’s coffers to bolster the company’s increasingly essential Services revenue.

But while Apple TV channels may be a necessary part of Apple’s overall TV strategy, let’s not pretend there’s any innovation involved, just back-room negotiations and licensing fees.