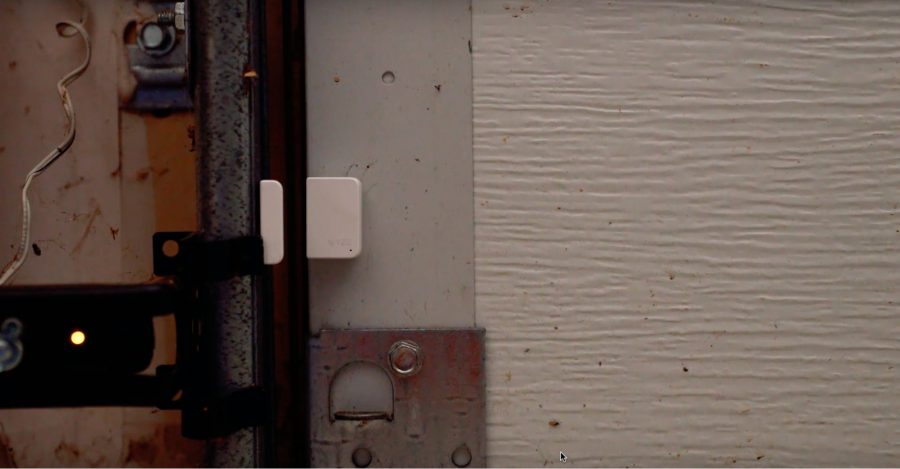 It’s vacation season, and perhaps the most stressful part of going away is wondering what’s going on in your house while you’re gone. In “A Prairie HomeKit Companion: HomeKit Security Provides Peace of Mind” (11 September 2017), Julio Ojeda-Zapata explored how to use HomeKit accessories to monitor your home, and while I prefer HomeKit, compatible accessories can be expensive. The cheapest HomeKit camera I can find, the D-Link Omna, runs about $130. And, let’s be honest, unless you live in a dorm room or a one-room cabin, you’ll need several cameras.

That’s part of the allure of the Wyze Cam security cameras, which start at just $20 (see “$20 WyzeCam Security Camera Is Almost Too Good to Be True,” 28 February 2018) and top out at a whopping $30 for the Wyze Cam Pan (see “Wyze Cam Pan Helps You Watch Your House for $30,” 26 July 2018). The downside is that they don’t support HomeKit (well, not without a bunch of hacking), but for the price of a single HomeKit camera, you can outfit your entire house with Wyze Cams.

For a complete home security system, you also need motion and contact sensors that can tell you when someone enters a room or when a door or window opens or closes. They exist for the HomeKit ecosystem as well, but again, you’re going to pay. A single Eve Door & Window costs $40 and the cheapest HomeKit motion sensor I can find, the ONVIS Smart Motion Sensor, costs about $26.

Wyze Labs has once again disrupted the home automation market by providing a complete sensor package for just $19.99. Called Wyze Sense, it includes two contact sensors, a motion sensor, and the bridge they need to communicate with your Wyze cameras. If you want more sensors, a four-pack of contact sensors costs $19.99 and a single motion sensor runs $5.99. And they’re tiny—in the photo below, you can see how much smaller the Wyze motion sensor is compared to the HomeKit-enabled Eve Motion. 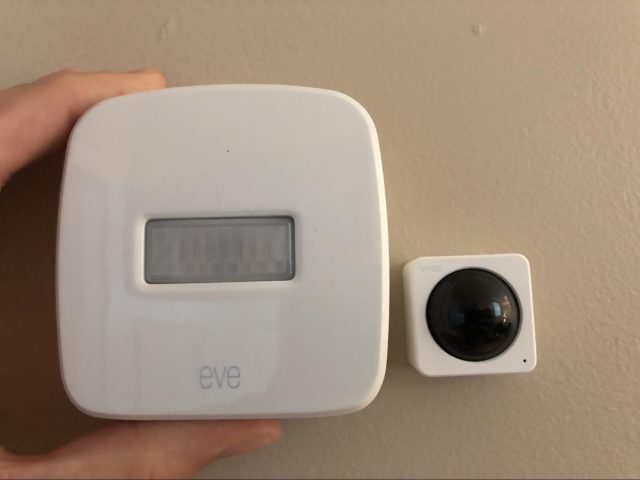 You need at least one Wyze Cam to use the Wyze sensors. Wyze Labs sent me a sensor starter kit and a Wyze Cam Pan to try it out. The bridge is a simple USB dongle that fits neatly in the square hollow on the back of a Wyze Cam. It also works with the Wyze Cam Pan, but it will stick out.

Bridge placement can be a bit tricky. Wyze claims that one bridge should cover an entire house, but I didn’t find that to be true. I first installed it in my upstairs Wyze Cam Pan, which covered most of the house, but I had to move it because it couldn’t connect to the contact sensors on my downstairs doors. Moving it to a Wyze Cam in my downstairs kitchen fixed that. I’d estimate the bridge’s range to be about the same as Bluetooth (Class 2)—about 30 feet (10 m), but that depends on your home’s construction and whatever interference might be present.

Installing a sensor is as easy as removing the adhesive backing cover and sticking it where you want it to go. Wyze recommends placing the motion sensor at head height. As for the contact sensors, they’re small and flexible enough that you can put them basically anywhere you want to detect something opening or closing: on a door, a window, the fridge doors, a cookie jar, you name it. Wyze Labs’ YouTube video offers some ideas, including using it to sense when your dryer has completed a cycle.

After you place them, you then have to pair the sensors by connecting them to a camera in the Wyze app (you can choose any camera that has a bridge attached) and pressing a recessed button on the sensor itself with an included tool that resembles the iPhone’s SIM removal tool.

Once you’ve set up your sensors, you can view them in the Home tab of the Wyze app. It shows you the current state of each sensor, such as if motion is detected or if a door is open. Tap a sensor to see a log of trigger events. 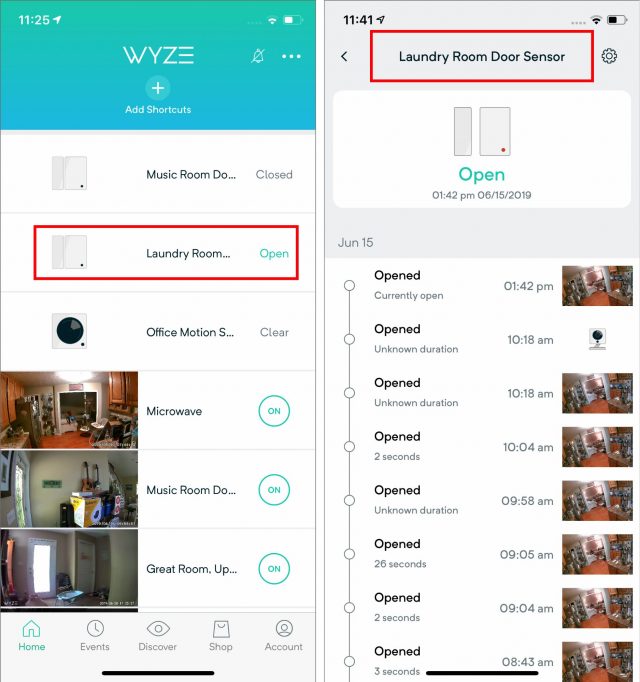 You can set your sensors to trigger recording on any set of Wyze Cams you choose. In other words, you can place a Wyze Cam in front of a door, connect a contact sensor to the door and frame, and get a short video whenever the door opens. In the right-hand screenshot above, you can see thumbnails from a Wyze Cam.

Of course, you can also choose to receive a notification whenever something triggers a sensor. One thing I like about the contact sensor trigger is that you can set it to alert you only if it remains open for a duration you choose, up to 24 hours. That’s handy if you have a kid who leaves the fridge open. Those notifications can be annoying because you get one every time a sensor is triggered, which can be pretty often. Thankfully, Wyze has added a bell icon to the Home tab that lets you turn all notifications on or off with a tap.

I’m bothered by the lack of HomeKit support, but that’s to be expected in devices this cheap. Wyze Labs has said that it is working to add HomeKit support but hasn’t indicated when that’ll happen. Belkin, however, added HomeKit support to its Wemo Mini through a software update, so I’m optimistic that HomeKit support will eventually come to the Wyze devices allowing me to integrate them into the rest of my home automation setup.

Despite their lack of HomeKit support, if you’re looking to improve security around your house and you already have a Wyze Cam, it’s hard to beat a set of motion and contact sensors for $20.