If you decide to buy an iPhone 11 or iPhone 11 Pro (see “Apple Announces iPhone 11, iPhone 11 Pro, and iPhone 11 Pro Max,” 10 September 2019), you may be puzzled by the dizzying array of purchase options that Apple offers when you check out.

Trade In, Trade Up

During Apple’s September 10th event, Apple retail chief Deirdre O’Brien mentioned Apple’s new Trade In program, though the details were vague. I was also puzzled because Apple has offered a trade-in program for a few years, called Trade Up with Installments. I’m not sure we covered it here at TidBITS, but it was announced alongside the iPhone SE back in 2016. As far as I can tell, the new Trade In program is the same as the old one, apart from the name.

Apple will also let you pay for the phone in installments outside of the iPhone Upgrade Program, but again, this Apple iPhone Payments program isn’t new, just better advertised (here’s Mashable talking about it in 2017).

If you run through the steps to buy an iPhone 11 now, you’ll first be asked if you’d like to trade in an iPhone. If you click Yes, choose a model to trade in, and confirm that the iPhone is in good condition, Apple will factor your maximum trade-in value into either your total purchase price or your monthly payment, depending on which option you pick. 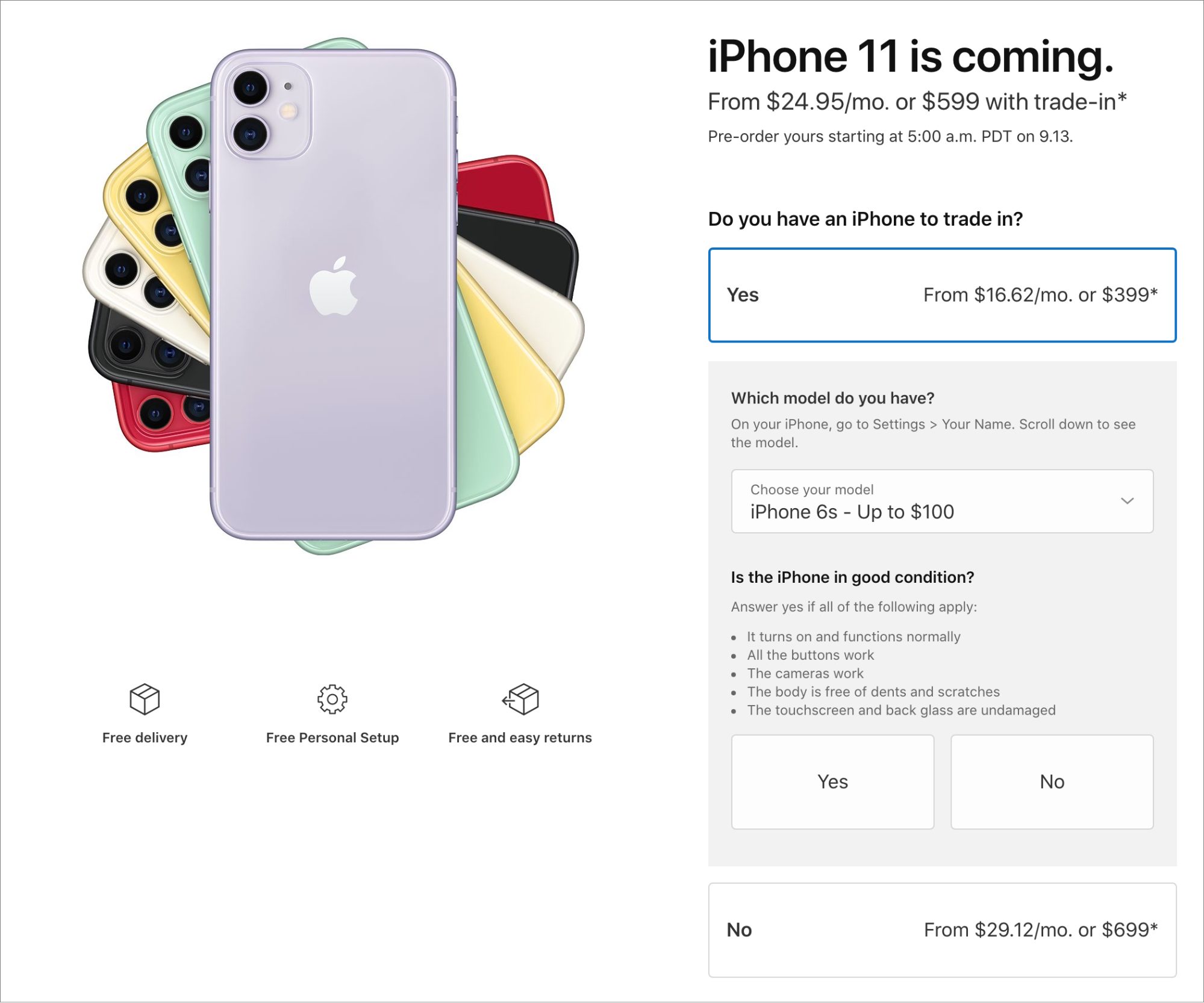 There are a couple of catches. One is you have to ship your old iPhone to Apple before you can get a firm trade-in amount. Apple makes this easy by sending you a trade-in kit with a prepaid shipping box. Once you have the kit, you have 14 days to return your old iPhone to Apple. Apple will inspect your iPhone and, if it’s in satisfactory condition, the company will either credit your payment method or your monthly bill, depending on whether you paid for your iPhone in full or if you chose the Apple iPhone Payments program.

Note that you might not get the full amount—that’s why Apple says “up to” some amount. If Apple feels that your assessment of the iPhone’s condition was overly positive, it might knock off some of the promised trade-in value. However, in my experience with the iPhone Upgrade Program, Apple hasn’t been excessively particular.

Let’s focus. If you choose to trade in an iPhone, you have two payment options:

If you’re not trading in an old iPhone, you have additional options:

Which should you choose? Here are some things to consider.

The payment programs are interest-free.

Whether you choose a carrier’s payment plan or one of Apple’s, they’re all interest-free loans. Some people mistakenly think Apple charges interest for the iPhone Upgrade Program due to the higher monthly fee, but that’s because AppleCare+ is rolled in. If you’d rather pay the whole amount upfront, that’s fine too, but there’s no disadvantage to choosing a payment plan apart from having to account for the transaction every month.

You can save 3% if you purchase with an Apple Card.

If you have an Apple Card, remember that you get 3% cash-back with every Apple purchase (see “How to Get the Most from Your Apple Card Benefits,” 14 August 2019). If you buy the iPhone upfront, you’ll get the 3% the day after your card is charged. Otherwise, you get 3% the day after every monthly payment. So for the base-model $699 64 GB iPhone 11, you would receive a $20.97 discount (not counting tax).

It’s best to avoid AT&T Next if you want an unlocked iPhone.

If you buy an iPhone through the AT&T Next monthly payment program, you’ll be among a tiny minority of iPhone users in the United States who are stuck with a carrier-locked phone. Apple says:

Nearly all iPhone models sold on apple.com and at the Apple Store are unlocked. This means they aren’t tied to a single carrier. The exception is when you buy an iPhone with AT&T Next. It will be tied — or locked — to AT&T.

Do you want AppleCare+?

Every purchase option lets you buy AppleCare+ separately, either at the time of purchase or up to a year later. And instead of a one-time payment that limits coverage to 2 years, you can now opt to pay for AppleCare+ in monthly installments, in perpetuity, or at least until Apple can no longer service the iPhone. Paying for AppleCare+ for too long makes no financial sense since at some point the payments would get you a new iPhone. Regardless, the iPhone Upgrade Program rolls the AppleCare+ price into the monthly payments for an iPhone, so it’s a bit more convenient.

Do you want to upgrade every year?

The downside to the Apple iPhone Payments program is that it doesn’t offer an annual upgrade option. The iPhone Upgrade Program and the carrier upgrade plans both let you upgrade after 1 year of payments, which could be useful if next year’s iPhone has features you find compelling.

But what if you don’t want AppleCare+?

If you want to pay monthly and have the option to upgrade every year but don’t want AppleCare+ for some reason, your best bet is one of the carrier upgrade plans. But I don’t see why you wouldn’t want AppleCare+. It’s cheaper and better than the carrier’s insurance plans, and iPhones are constantly at risk for breaking. If you buy into an upgrade program without AppleCare+ and break the phone after a year, you would be on the hook to buy a brand-new one, and you won’t have a functional phone to trade in to offset the cost.

I can’t decide! Pick one for me.

Go with the iPhone Upgrade Program. Here’s why:

If you’re locked into the Apple ecosystem—and we suspect that if you’re reading this, you are—it’s hard to go wrong with the iPhone Upgrade Program.