AirPods are all the rage, but they aren’t Apple’s only wireless earbuds. The PowerBeats Pro buds, a product of the Apple-owned Beats by Dre brand, have key features in common with their little white cousins, yet are different enough to tempt those who might find AirPods wanting.

I’ve been using loaner units of the AirPods and PowerBeats Pro heavily for a while. Both are high-quality products, and you could even see them as complementary since they’re made with different usage scenarios in mind. But at $159 and up for AirPods, and $249.95 for the PowerBeats Pro, most people will restrict themselves to one or the other.

So it’s important to understand the attributes of each and how they fit into different lifestyles and use cases. There is quite a bit to digest, so let’s dig in.

Both the AirPods (now in their second generation) and the PowerBeats Pro are Apple to the core. Key features found in both include:

These commonalities aside, the AirPods and PowerBeats Pro are strikingly different products. I compared them in a variety of ways, including fit, sound isolation, sound quality, controls, battery life, portability, water resistance, and colors.

Physical design, and how they fit in your ears, is the most obvious difference. 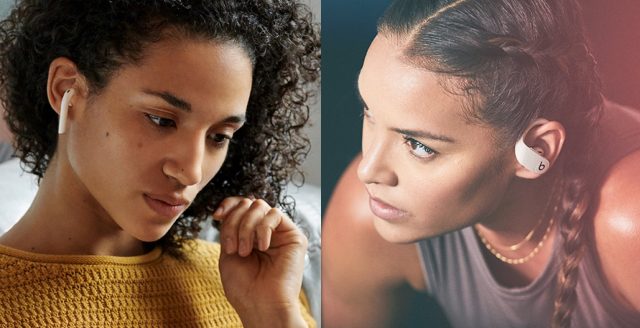 AirPods are wireless versions of Apple’s EarPods with the same sculpted, hard-plastic design that tucks into your ear canal and remains suspended there, courtesy of its curved contours. This approach is sometimes controversial, since all ear canals are different, and some users don’t feel the AirPods can be seated snugly and securely enough. For some people, they’ve even been known to fall out during normal activity. 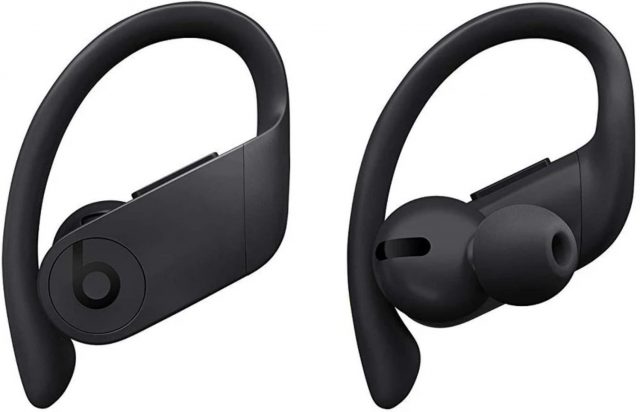 Together, these design elements fuse the earbuds to the sides of your head to a degree AirPods cannot. But do you want that?

Those intending to use earbuds during vigorous sports would typically prefer the PowerBeats Pro, budget permitting. But others, particularly those who wear glasses or sunglasses, might find the clingy PowerBeats Pro irksome and uncomfortable. I’m no fan of the ear hook, which jockeys for position with the earpieces of my glasses. Generally speaking, I find the PowerBeats Pro less comfortable than advertised.

The AirPods have the virtue of simplicity—donning them is much less of a production than the more complex PowerBeats Pro—and, for the typical user, more comfortable.

Where do you typically plan to use your earbuds? Noisy environments, such as on a bus or train for your commute, or perhaps on planes? Or in quieter surroundings, like your home, office, or health club, or in your peaceful neighborhood on jogs or dog walks? The answer to this question has a direct bearing on which of the earbuds you should choose.

AirPods don’t form a tight seal within your ear canal—meaning all that excessive plane, train or automobile noise will just about drown out your music or podcast even if you crank the volume all the way up (which is terrible for your long-term hearing health). I’ve just about given up the use of AirPods in such settings, reserving them for quieter home and office use. 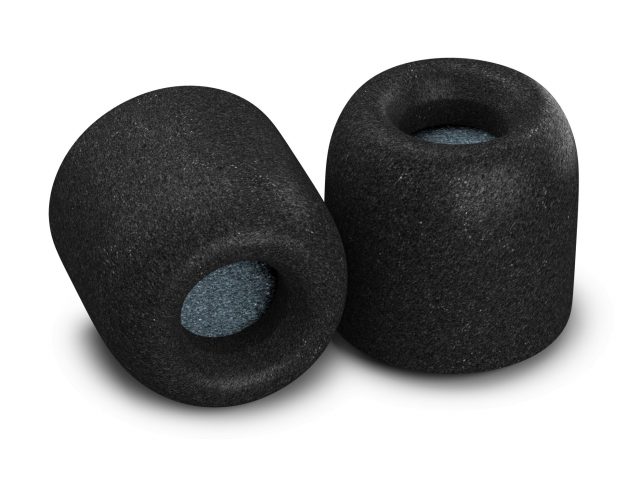 The PowerBeats Pro, courtesy of their rubber ear tips, seal out external sound to a far greater extent, making them more suitable for noisy environments. You can enhance the noise-blocking even further with third-party ear tips. I have long been a fan of Comply foam tips, which have superb sound-isolation qualities, and are available for the PowerBeats Pro.

To be clear, the PowerBeats Pro audio-isolation qualities aren’t the active, adjustable, battery-powered kind of audio cancellation available with fancy headphones from Bose and the like. We’re just talking about passive, partial sound isolation.

Of course, sometimes it’s better to let additional ambient noise in, so you can hear that car coming up behind you. Don’t compromise safety for sound isolation.

Which sound better? You’ll get what you pay for. The higher price of the PowerBeats Pro buys you better audio quality—and, to my relief, not the bass-heavy kind that has given other Beats headphones some notoriety.

It’s a close call, though. Audio from the AirPods is just fine, at least for casual, non-audiophile users like me.

But sound isolation figures into the quality equation too. It doesn’t matter how nice AirPods sound if their audio will get drowned out. Even in the quietest of environments, the lack of ear-canal sealing spoils the experience to a degree—I continually fiddle with the positioning of my AirPods to hear them better, as I’ve long done with the wired EarPods.

You can control both earbuds to an extent with Siri via the usual “Hey, Siri” summons. Beyond that, they diverge. AirPods, true to Apple’s minimalist tendencies, have no physical controls, but the PowerBeats Pro do.

That said, AirPods have a double-tap feature. You can select the left or right AirPod and then decide what you want that double-tap to do: summon Siri; play, pause or stop audio; skip to the next audio track, or go back to the previous track. 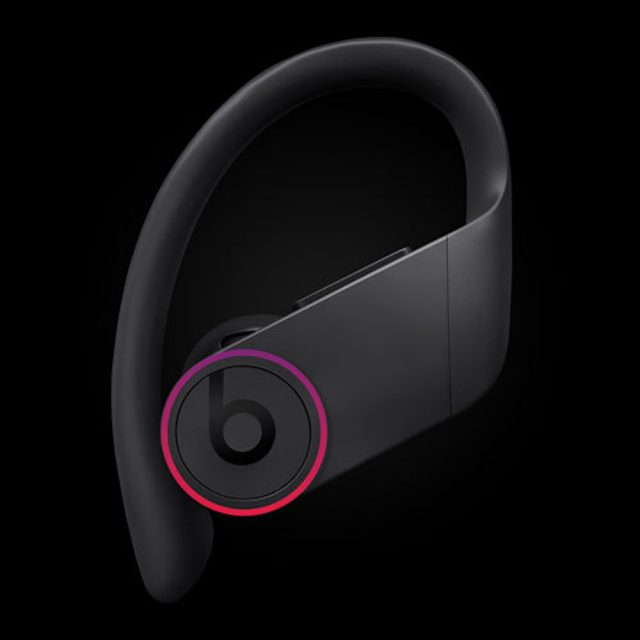 Some users prefer actual, moving buttons, and the PowerBeats Pro provides them. You use the large, rounded button with the Beats logo on the side of each bud to pause or play audio (one press), skip to the next audio track (two presses) or go back to the previous track (three presses). 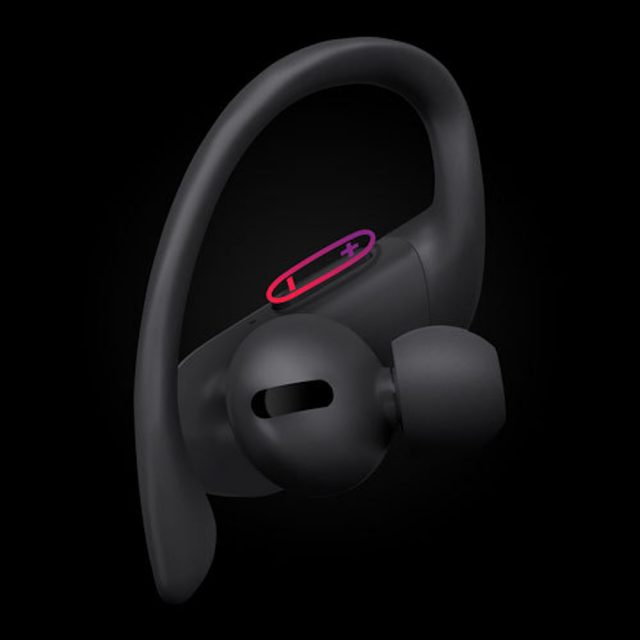 This logo button also works for phone calls: press once to answer or end a call, to answer a second incoming call and put the first on hold, or to switch between two active calls. Long-press the button to decline a call.

A small rocker button atop each earbud lets you increase or decrease the volume. Using the volume button on either bud automatically adjusts the setting on both.

Realistically, how long the earbuds go on a single charge means little to me since I’d never use them nonstop—that is, without putting them into their case on occasion—even for 5 hours.

Battery-case capacity matters more to me since it determines how long I can use the earbuds without needing to replenish the set at a power outlet—when off the grid camping, say—and, in this regard, the AirPods and the PowerBeats Pro are no different. A 24-hour case capacity translates into multiple days of real-life use, which is great.

AirPods are famously compact—in their battery case and out. This is not always a good thing; the tiny buds are notoriously easy to lose (as New York City’s Metropolitan Transit Authority recently documented), and they can get inadvertently run through the wash (as I’ve done on multiple occasions).

In contrast, the PowerBeats Pro are a bit bigger and more awkwardly shaped, meaning you’re less likely to drop or misplace them. But their battery case is a monster compared to the case that the AirPods use, making the PowerBeats Pro much less convenient to take with you. 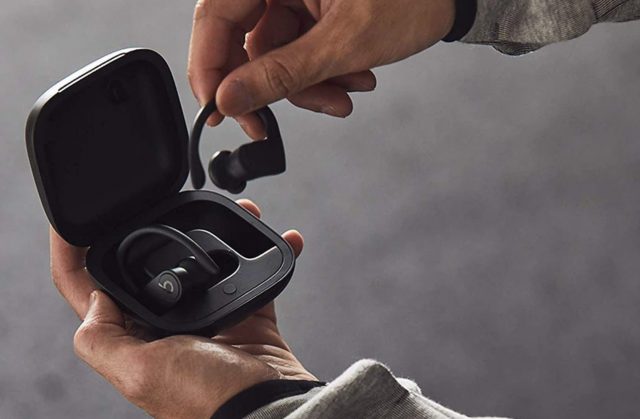 Apple makes no official claims about the water resistance of the AirPods. I can anecdotally tell you my first-generation AirPods survived several runs through the washer and dryer, but that should in no way guide your buying decision.

The PowerBeats Pro have an IPX4 water-resistance rating, meaning they can withstand splashing liquid (such as rain or quick faucet rinse-offs) but can’t be submerged for any significant length of time. This makes PowerBeats more appropriate for sweaty workouts, although AirPods are commonly used in this manner with no significant complaints.

However, the special Qi-compatible battery case raises the cost of a case-plus-buds combo from $159 to $199. You can also buy the wireless case by itself for $79 for use with first-generation AirPods.

Alas, the PowerBeats Pro lack a wireless-charging option. Their battery case is Lightning-only.

To paraphrase Henry Ford, you can get AirPods in any color you want, as long as it’s white. Likewise, until recently, PowerBeats came only in black. Those craving other colors did have options that didn’t come cheap, like ColorWare paint jobs for AirPods and PowerBeats. But last month, Beats added three new color options: Ivory, Moss, and Navy. They’re distinctly muted shades, but they give you an opportunity to move beyond the monochrome.

As I’ve noted, the AirPods and PowerBeats together covered all of my listening needs nicely, and it wouldn’t be insane to buy both—if you can afford that. Most can’t and have to choose. Here’s the bottom line:

At $160–$200, AirPods are more affordable, even with a wireless-capable battery case, are less complicated to use, have greater portability with a case that slips easily into a pocket, sound decent, and are comfortable for most users. They’re the best overall option, assuming you’re sticking with Apple (and probably even if you look to other vendors, to judge from their popularity).

With a $250 price tag, the PowerBeats Pro are more specialized accessories for those with more particular requirements. They sound better overall—and even more so with sound isolation courtesy of those soft-rubber tips. They’re also better for extreme athletics since they attach more securely and are more sweat-resistant. And although it’s hard to imagine paying a $50 to $90 premium just for some optional colors, you can do that if you want.