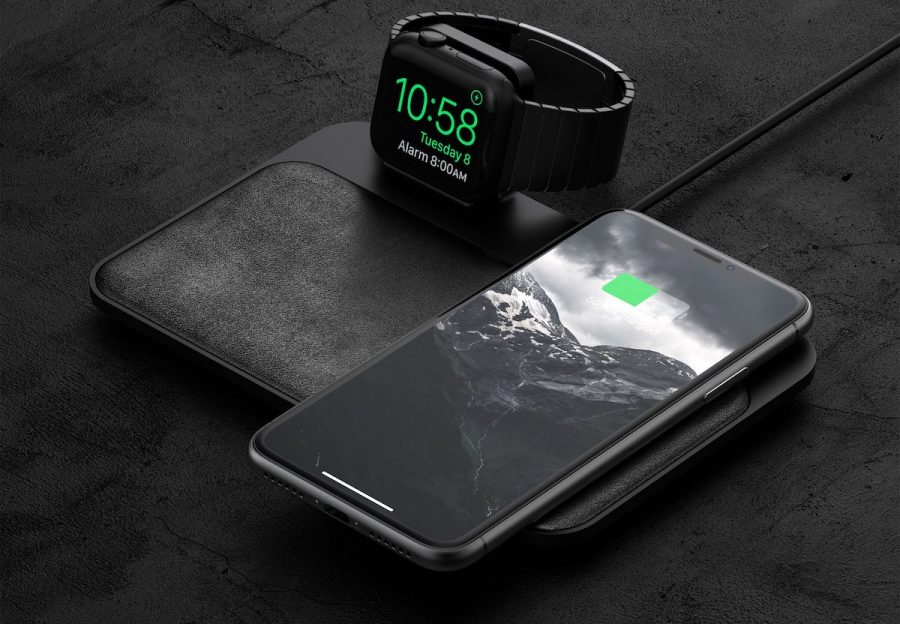 Apple’s AirPower mat was once billed as the next big thing in wireless charging for users of the iPhone, the Apple Watch, and the AirPods because it would have charged all three products simultaneously.

So when Apple killed the unreleased AirPower in March after keeping customers in suspense for 18 months (see “Apple Cancels AirPower, Can’t Take the Heat,” 29 March 2019 and “Apple’s AirPower Wireless Charger: What Happened?,” 17 September 2018), those who had been holding out for the product were left to ask: “Now what?” 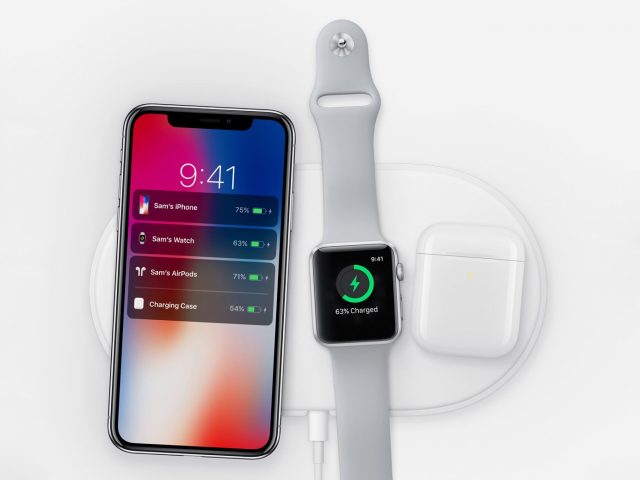 Unsurprisingly, given Apple’s failure to overcome the engineering challenges, there is nothing on the market quite like the AirPower, which Apple claimed would charge evenly across the entirety of its oval-shaped surface so you could place an iPhone, Apple Watch, and AirPods (in Apple’s wireless-charging case) on it any which way.

But that doesn’t mean you have to settle for a boring device charger. I went in search of chargers that blend personality with versatility for those who want something special.

If you like the notion of charging an iPhone, Apple Watch, and AirPods all at once, you have options. I evaluated a lot of wireless and wired chargers in this category. I zeroed in on a handful I like, but they are not without their annoyances.

The $139.95 Nomad Base Station Apple Watch Edition builds a fancy, leather-clad charging surface onto a metal base and adds an Apple Watch dock on its left corner. With space on the leather pad for two iPhones (or an iPhone and the wireless-ready AirPods case), Nomad’s charger is a decent all-in-one option. 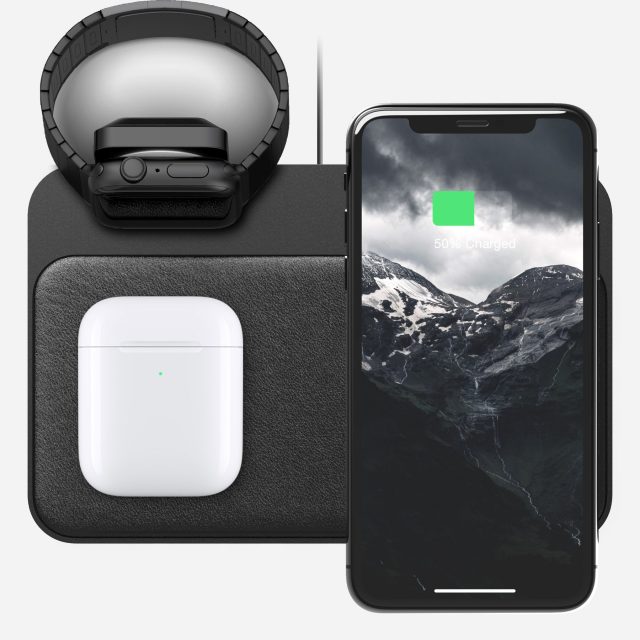 Proper positioning of an iPhone or AirPods case on the leather pad takes precision and practice. This is by design, Nomad told me:

There are two schools of thought when it comes to wireless charging production. One will open up a wide hotspot area for the consumer to place the product. That makes it easy to begin charging but has a negative impact on the charging efficiency. The other, which Nomad adopted, is to make a smaller hot spot that stays true to charging specs.

More annoyingly, the Nomad Base Station emits a barely audible but high-pitched whine when plugged into power. Unfortunately, this problem isn’t unusual—I’ve experienced similar noises with other wireless chargers—so you should check for the sound when buying any such device and decide if you can live with a faint screech.

The other issue with the Nomad Base Station is cost. At $140, it’s pretty expensive when you consider that simple charging pads can be had for $15 or less.

If you already have a convenient way to charge your Apple Watch and just want a handsome iPhone and AirPods charger, the $99.95 Nomad Base Station Hub Edition is all you need. It has the same leather pad for two devices and the same metal base, but it dispenses with a watch dock. 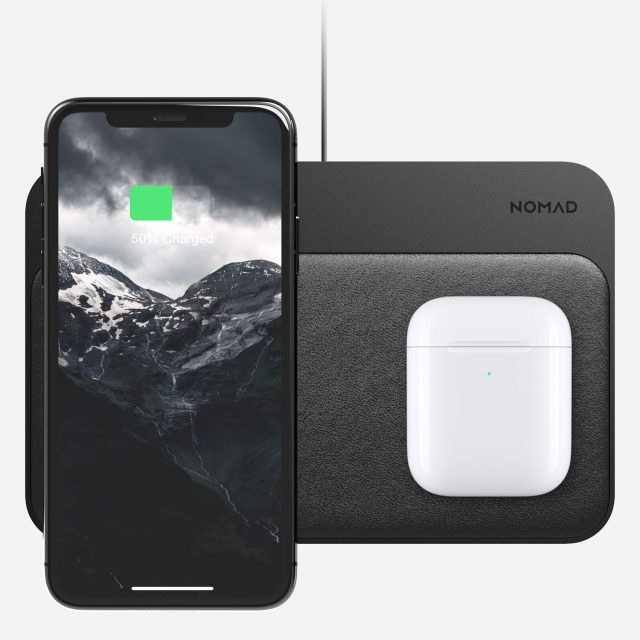 A Walnut Edition swaps the metal base for one with a wooden finish.

Like the other Nomad Base Station, this version supports 7.5-watt iPhone charging and charges at 10 watts with compatible Android smartphones.

Elago tackles three-device charging in a different, entirely wired way. Its $24.99 3 in 1 Charging Hub sports docks for an iPhone and an AirPods case, with room for an Apple Watch to wrap around the base of the elevated AirPods dock. 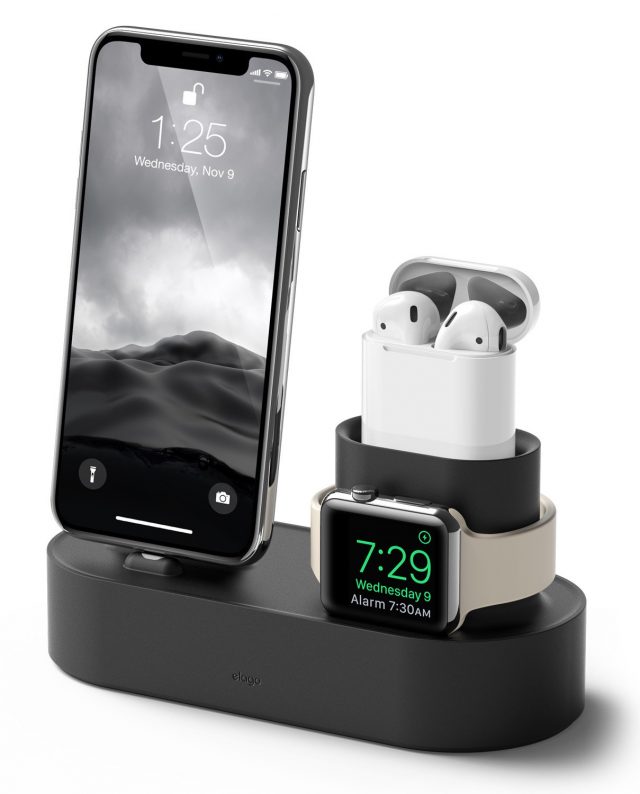 For the 3 in 1 Charging Hub to work, you need to add the standard cables. Lightning prongs poke through the bases of the iPhone and AirPods docks. The Apple Watch location has a rounded cutout for positioning the charging puck. Cables snake out the back of the hub—with three small slots in the base to keep them organized—and plug into standard chargers. 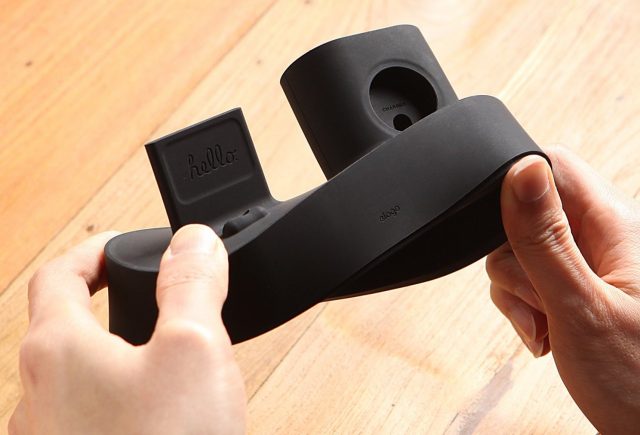 Unusually, Elago manufactures the hub entirely using soft silicone, which is durable and pleasing to the touch. Playful touches include an iPhone support that looks like the front of a classic 128K Mac, complete with a “hello” message. It’s available in black, dark gray, white and “Jean Indigo.”

I found the 3 in 1 Charging Hub enchanting, but not without issues. Lightning cables are sometimes difficult to keep in place. You have to position the prongs just so for dependable charging, but they can become dislodged at times. On occasion, pulling out the iPhone brings the whole cable with it, which is annoying. The other issue is the messiness of having so many cables to manage, but they are mostly out of sight and are therefore not an aesthetic calamity.

Overall, the 3 in 1 Charging Hub is a clever, low-cost way to charge multiple Apple devices at once if you don’t mind having to futz with cables on occasion.

If you already have a way to charge your iPhone, Elago’s $14.99 Mini Charging Hub dispenses with the iPhone dock and sticks to AirPods and Apple Watch charging. 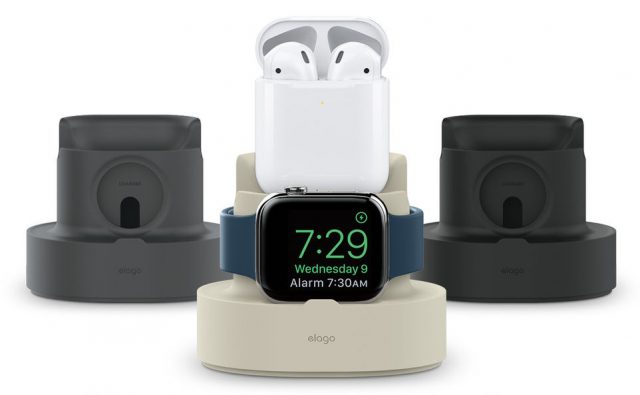 As before, the AirPods case sits on an elevated dock, with the Apple Watch wrapping around the dock base. The Mini Charging Hub is made of soft silicone and comes in black, dark gray and off-white.

Elago’s Mini Charging Hub hits a sweet spot for me since it is an affordable and space-saving way to charge two Apple devices alongside my regular iPhone wireless-charging pad.

The market is littered with simple wireless charging mats (see “13 Qi Wireless Chargers for the iPhone Reviewed,” 22 February 2018), but you might want more versatility and design pizzazz. Here are some of my favorites.

Twelve South has long been renowned for its HiRise iPhone charging docks for the iPhone, iPad, and Apple Watch (see “Apple’s New iPhone Dock Versus the Competition,” 24 June 2015).

Now the company has designed the $79.99 HiRise Wireless charger with familiar touches, including an extra-heavy metal base with a rubber bottom and a leather upper surface. Atop the base, an oval-shaped charging puck fits within an angled plastic frame. Just lean your iPhone against the charging surface; a nub in the leather base keeps the iPhone from sliding out of position. 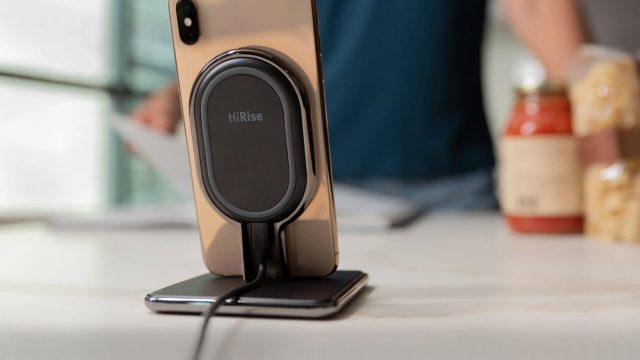 The stand gets its power via a USB-C port at one end of the puck. It comes with a USB-C to USB-A cable, but not a wall charger—Twelve South assumes you’ll use the charger that came with your iPhone.

The HiRise Wireless is a fantastic desktop or bedside charger. But what if you are going on a trip? Instead of packing the entire dock, which would occupy a lot of space in a suitcase, you can pop out the puck and carry only that, along with a cable and charger. Despite its compact size, the puck works like any other flat wireless pad. You can also then use it to charge an AirPods wireless case, which isn’t possible if the puck is in the stand. 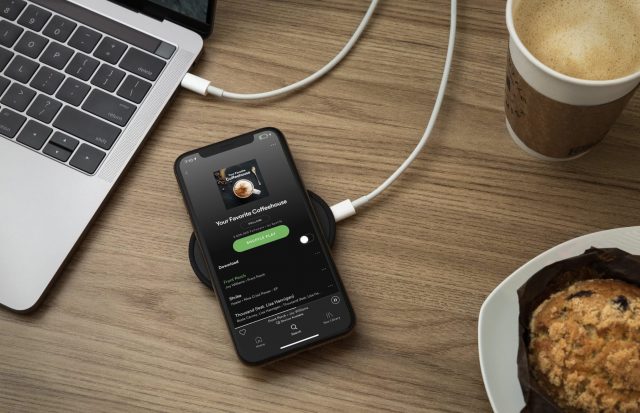 My only quibble with the HiRise Wireless is its plastic frame, which feels a bit chintzy and fragile; pop the puck in and out with care.

If you crave an upright iPhone stand that lets you position your handset either horizontally or vertically while charging it wirelessly, Logitech and Belkin have you covered. 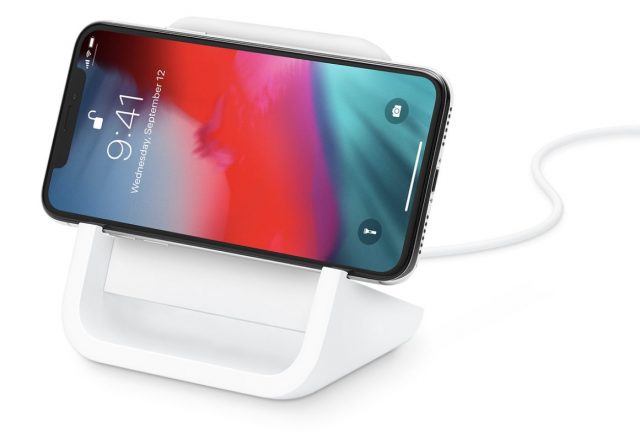 Though these stands look different—the $69.99 Logitech has a square-ish configuration while the $69.99 Belkin is more rounded—they operate on the same principle. You can position your iPhone in either portrait or landscape mode, the latter of which makes it easy to watch video on the small screen. 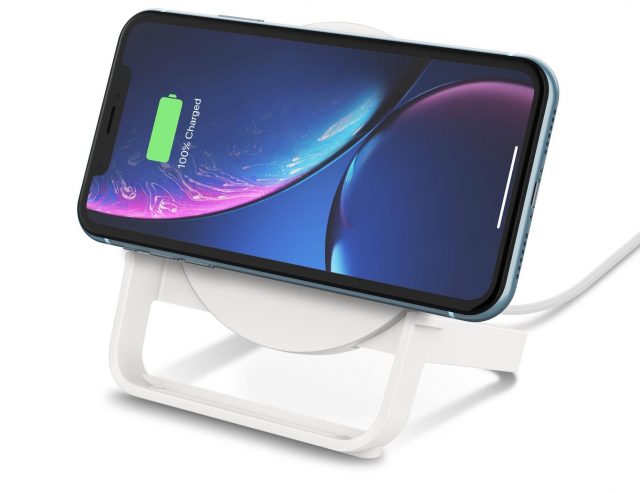 These stands won’t work for charging AirPods since they don’t lie flat. Also, in my testing, the Logitech stand seemed to have difficulty charging an iPhone XS Max in Apple’s Smart Battery Case even though that accessory supports Qi wireless charging. The Belkin stand worked fine with that combination.

If you like Belkin’s stand, I suggest going with the black version of its dock instead of the white since, in my experience, their gear in the lighter shade tends to look dingy after a while. That also happened with the Logitech dock sample I tested, but it’s available only in white.

Manufacturers have come up with boatloads of Apple Watch charging docks and stands (see “Eight Apple Watch Stands That Stand Out,” 5 August 2015), but certain Elago models have charmed me because of their Apple-themed whimsy.

A while back, I wrote about one that’s shaped to resemble a classic 128K Mac (see “New Apple Watch Stand Looks Like the 128K Mac,” 2 March 2017). Since then, the company has added to its line of Apple-styled watch stands. 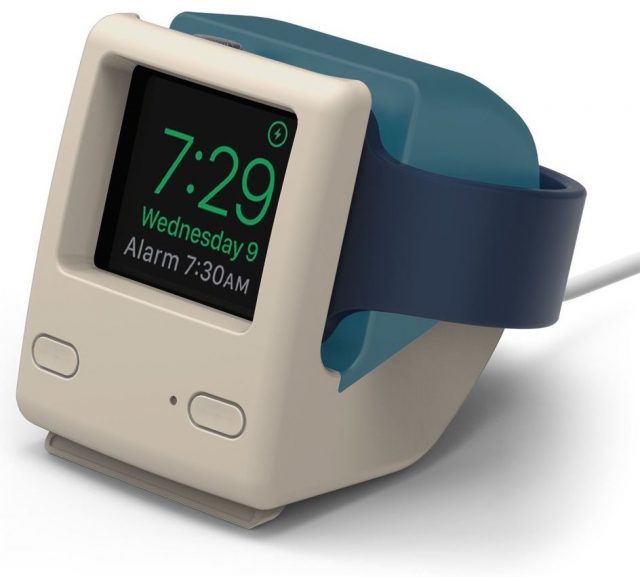 These include a model made to look like the Bondi Blue iMac (there’s an Aqua Pink version that looks like a Strawberry iMac, too), and another that looks like a click-wheel iPod—choose between the classic-looking white iPod or a Product (Red) version. 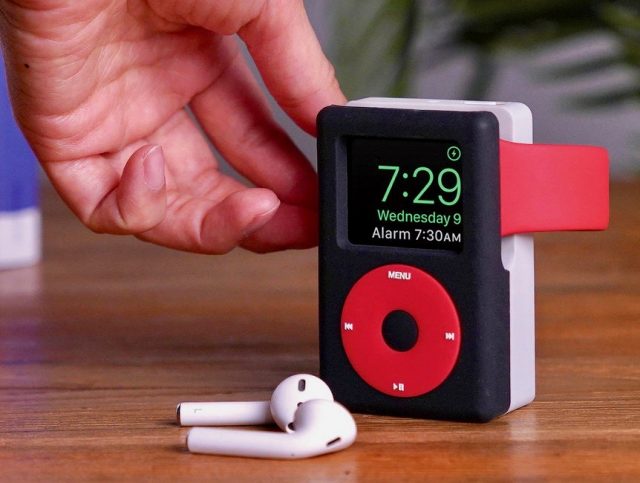 For those who like retro game machines, Elago also sells a GameBoy-styled stand in your choice of four colors. Pricing on these whimsical chargers fluctuates a bit between $12.99 to $15.99, depending on the style and what sales are in effect.

All of these Apple Watch stands work on the same principle as the 128K Mac version: thread your Apple Watch charging cable through the inside of the stand until its puck fits within a circular cutout. Then, drop your watch into the slot built into each stand so it makes contact with the puck and begins charging. Your watch screen then becomes the faux Mac, iPod, or GameBoy display.

It’s too bad that AirPower proved impossible for Apple to build because it would have advanced the state of the art for wireless charging. Other chargers from the likes of Vinpok and AirUnleashed mimic AirPower’s look and feel, but don’t provide the underlying technology that apparently was too much for even Apple’s engineers. (I tested an AirUnleashed sample with high hopes, but its surface marred easily, and I had difficulty getting it to work dependably. If I have better luck with a replacement unit, I’ll say something in the comments.)

So it’s best to put AirPower out of our minds and look for a charger whose approach, personality, and price matches your needs.