After iOS 13.0 being available for just 5 days, Apple released iOS 13.1 to fix numerous bugs and bring back promised iOS 13 features like personal automations in the Shortcuts app, driving ETAs in Maps, audio sharing for Apple audio devices, and more.

The list of bugs fixed in iOS 13.1 is long and not worth delving into—if you have already installed iOS 13.0 on your iPhone, just update immediately. Shortly after releasing iOS 13.1, Apple followed up with iOS 13.1.1 to fix even more bugs (see “iOS 13.1.1 Fixes Bugs and Keyboard Security Issue,” 27 September 2019).

If you avoided installing iOS 13.0, now is a better time to board the iOS 13 train, but given how cursed this release cycle has been, we recommend waiting at least a few more days to see if any major problems crop up.

Here are the features seeing the light of day for the first time in iOS 13.1, all of which I’ve documented for a free update to my Take Control of iOS 13 and iPadOS 13 book.

With iOS 13.1, you can now share your estimated time of arrival from the Maps app while en route. While navigating, swipe up on the bar at the bottom of the screen and tap the revealed Share ETA button. Tap a contact (or tap Contacts to see all of your contacts) to send a message with your destination and your estimated ETA. If you’re significantly delayed, iOS will automatically send an updated ETA to the contact. 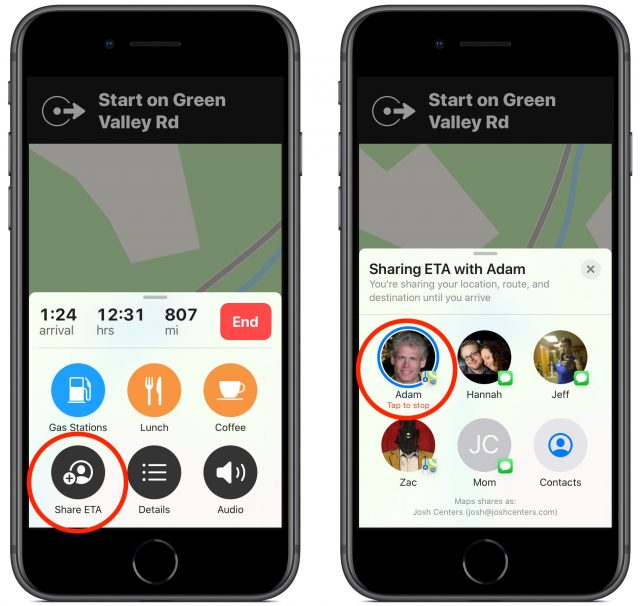 The recipient doesn’t have to be using iOS 13. Those who are will receive a native notification through the Maps app. Everyone else will get a text message.

iOS 13.1’s new audio sharing feature lets two pairs of AirPods listen to audio from a single device. (This feature also works with Beats earbuds and headphones powered by Apple’s W1 or H1 chip.) The “broadcast” device needs to be relatively recent, like an iPhone 8 or later. While one iOS 13.1 device is playing audio, place another iOS 13.1 device paired with a second set of AirPods or the like nearby to see an option to share audio.

(TidBITS publisher Adam Engst said that he and his wife Tonya could have used this recently. They tried to share audio while watching a TV show on an iPad during a transatlantic flight by each using a single AirPod. Unfortunately, differences in their hearing acuity meant that when the volume was comfortable for Tonya, Adam couldn’t hear the audio at all. The solution for him proved to be turning on subtitles, which are remarkably useful even when not being deafened by jet engines. A reader also pointed out that they could have used the balance controls in Settings > (General, in iOS 12) > Accessibility > Audio/Visual to control the volume separately.)

In previous versions of iOS, you’ve been able to create automations in the Home app. They enabled you to, for instance, have lights turn on when you arrive home. iOS 13.1 now brings this sort of automation to your iOS devices.

Personal automations let you do things like start playing a particular playlist whenever you open a certain app, dim the screen brightness when Low Power Mode turns on, or turn off your cellular data connection when you connect to your home Wi-Fi network.

To find out for yourself what you can do with personal automations, open the Shortcuts app (it’s now built into iOS 13) and tap the Automation tab.

Automations in the Home app let you do things like turn on lights at sunset or lock a door when you leave the house. With iOS 13.1, you can now add shortcuts to a home automation. While creating an automation in the Home app, scroll down in the action list and tap the confusingly named Convert to Shortcut. From there, you can create a shortcut that activates scenes and accessories, as well as other actions.

Unfortunately, the available shortcut actions are quite limited, so I’m struggling to find an actual use case for this feature. We’ll see what happens as iOS 13 continues baking.

Likewise, you can also now trigger HomeKit events from a shortcut. For example, I created a shortcut that lets me open an Apple TV app from a menu, and if it’s after sunset, it will also dim the lights in the room. Once I’ve had a chance to dive into these new capabilities, I’ll cover them in an update to Take Control of Apple Home Automation.

Data Separation for Bring Your Own Device

Those who use an iPhone or iPad issued by their employer may appreciate another new addition to iOS 13.1: data separation. This feature allows employees to maintain a partition between their data and their employer’s data on company iPhones. We don’t have managed devices here, so we’re not entirely sure what this will look like or how it differs from existing features in iOS that separate personal and corporate accounts.

Even after the release of iOS 13.1, some promised iOS 13 features are still missing and continue to be promised for later this year, perhaps in iOS 13.2 or later. These features include:

Although the features that Apple removed from iOS 13.0 and has restored in iOS 13.1 aren’t world-changing, the mere fact that we’re writing this article is evidence enough that this release approach was confusing for users. Apple would have been better served to restrict iOS 13.0 to new iPhones that already had it pre-loaded and then give the rest of us iOS 13.1 when it was ready.