The Verge has a roundup of Amazon’s latest hardware event, at which the company flooded the market with 15 new products, many of them with the Alexa voice assistant built-in. There were expected updates like a new screen-equipped Echo Show, a new Eero mesh Wi-Fi system, and an Echo Dot with an integrated clock. But Amazon didn’t stop there, taking aim at the HomePod with the $199 Echo Studio and going after the AirPods with the $129 Echo Buds, which surprisingly can also work with Siri or Google Assistant. Then things started to get weird, with the Echo Glow, a talking smart lamp for kids; the Echo Flex, a plug-in Alexa unit; and the Alexa Smart Oven, which combines a voice assistant with a microwave, convection oven, and air fryer. Moving from weird to absurd, Amazon also introduced the Echo Loop, a wearable ring with Alexa built-in, and the Echo Frames, which are Alexa-powered glasses that don’t have any cameras or displays. Oh, and soon Alexa will be able to shout profanities at you with Samuel L. Jackson’s voice. 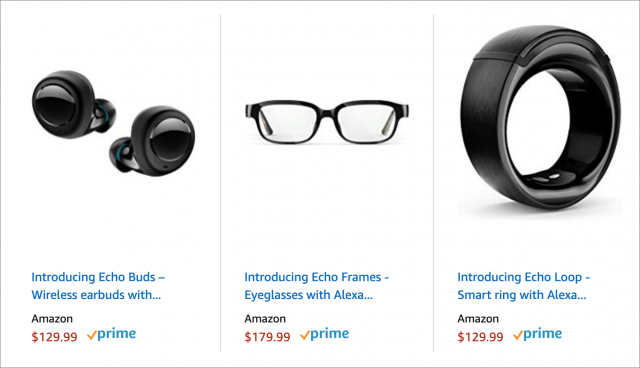 Like Apple and Google, Amazon has taken flak for employing contractors to listen to Alexa interactions (see “Amazon Workers May Be Listening to Your Alexa Conversations,” 11 April 2019). To address some of those privacy concerns, Amazon has promised a new “Home mode” that prevents the recording of audio and video, along with new commands to let you delete stored voice data.

Comments About “Alexa, Throw Spaghetti at the Wall and See What Sticks”