Fasten your seatbelts, gentle readers, because Apple is once again frantically pushing out bug fixes for its operating systems, with updates to iOS 13.1.2, iPadOS 13.1.2, watchOS 6.0.1, and watchOS 5.3.2.

iPadOS 13.1.2 offers a subset of these fixes, addressing only the iCloud Backup progress bar bug and HomePod shortcut problem.

The Apple Security Updates page lists iOS 13.1.2 and iPadOS 13.1.2, suggesting that they contain security fixes, but says only, “This update has no published CVE entries.” (CVE stands for Common Vulnerabilities and Exposures, and is a public database of publicly known cybersecurity vulnerabilities.) That implies Apple identified the associated vulnerabilities internally.

You can install the iOS update (77.6 MB on an iPhone X) and iPadOS update (81 MB on a 10.5-inch iPad Pro) in Settings > General > Software Update or through iTunes. Again, if you’ve hopped on the iOS 13 train, keep installing these updates. If you’re still on iOS 12, sticking with it for a few more weeks may result in a more stable user experience.

If you thought it was hard to keep up with iOS and iPadOS, just wait. On 19 September 2019, Apple released watchOS 6. But the company left those of us who are still using an Apple Watch Series 1 or Series 2 hanging at watchOS 5.3.1, with the only explanation being a footnote on the watchOS 6 Web page that says merely:

Now the picture has gotten even more complicated. Apple today released watchOS 6.0.1 for the Apple Watch Series 3, Series 4, and Series 5. It fixes a bug that rendered the Mickey Mouse and Minnie Mouse watch faces incapable of speaking the time, addresses an issue that could prevent the calendar complication from displaying events, and fixes the same problem that caused iOS devices to lose display calibration data. As with iOS and iPadOS, it appears on the Apple Security Updates page but has no published CVE entries. It’s a 75.7 MB download.

Simultaneously, Apple pushed out watchOS 5.3.2 for the Apple Watch Series 1 and Series 2. Its release notes say only that it fixes security bugs. It’s a 46 MB download. 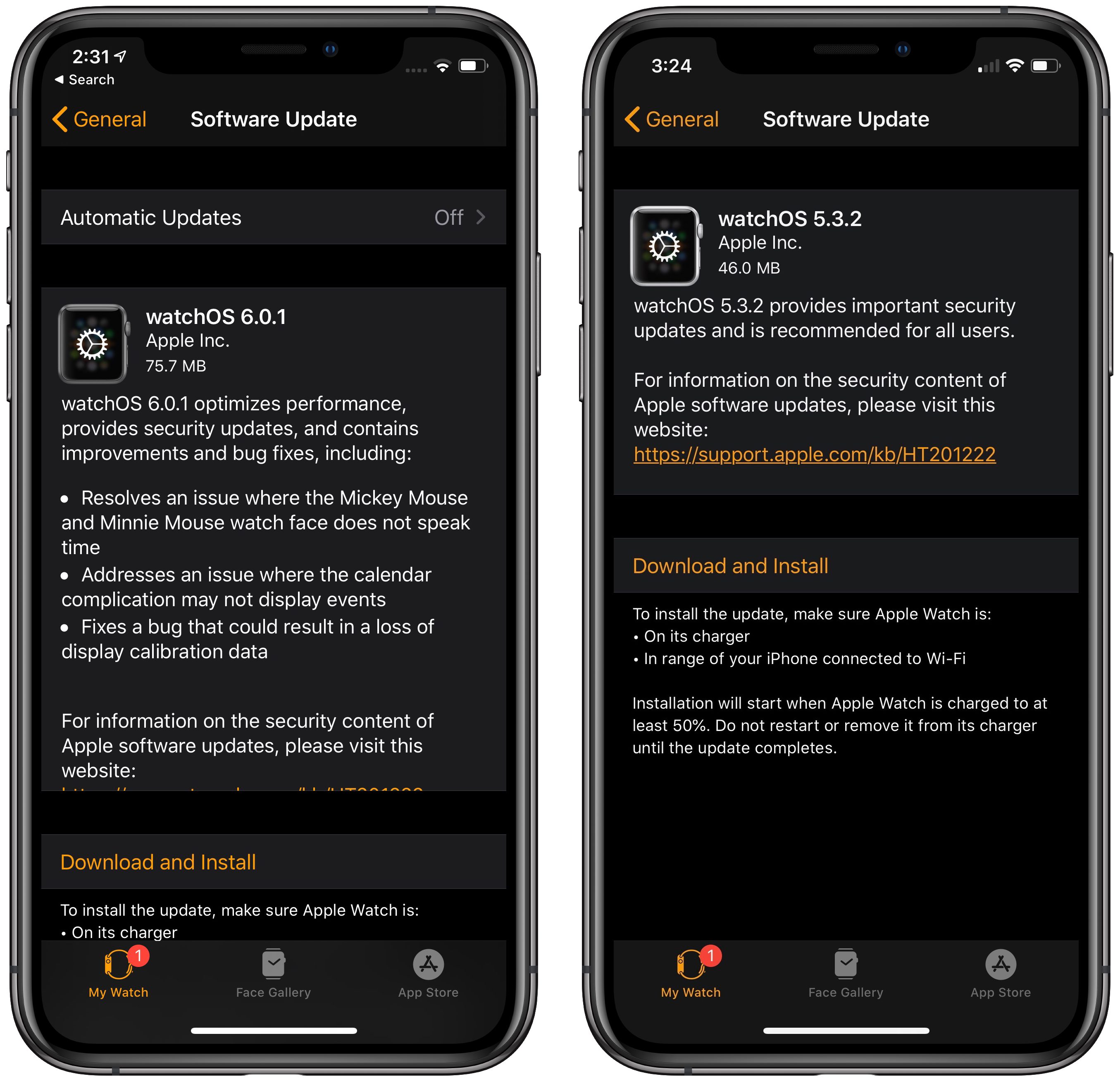 Whichever version of watchOS you’re running, we recommend updating immediately. If you’re using an Apple Watch Series 1 or Series 2, you wouldn’t want an evildoer taking advantage of a security vulnerability known only to Apple to hack into your watch to read (very slowly) your step count for the day. And for those with newer Apple Watch models, Mickie and Minnie must be unmuzzled!`