Reporting on its Q4 2019 financial results, Apple announced net profits of $13.69 billion ($3.03 per diluted share) on revenues of $64 billion. The company’s revenues were up 4% compared to the year-ago quarter (see Apple’s Q4 2018 Results Show Strong End to 2018, Despite Flat or Declining Unit Sales).

Although revenues did rise somewhat compared to last year’s Q4 results, higher costs of sales and increased expenditures on research and development reduced the company’s profits from the $14.1 billion netted over the same quarter last year. As you can see in the charts below, the iPhone still brings in over half of Apple’s revenue, but its drops were offset by gains in other areas. Apple CEO Tim Cook summarized the results, saying, “We concluded a groundbreaking fiscal 2019 with our highest Q4 revenue ever, fueled by accelerating growth from Services, Wearables, and iPad.” 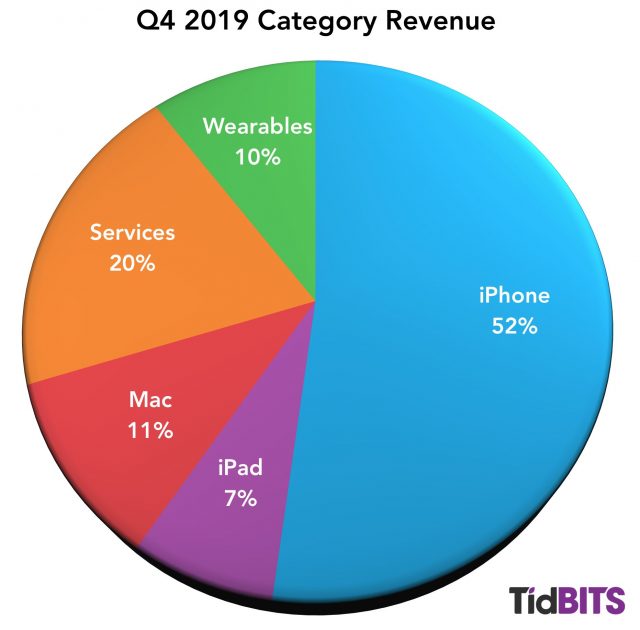 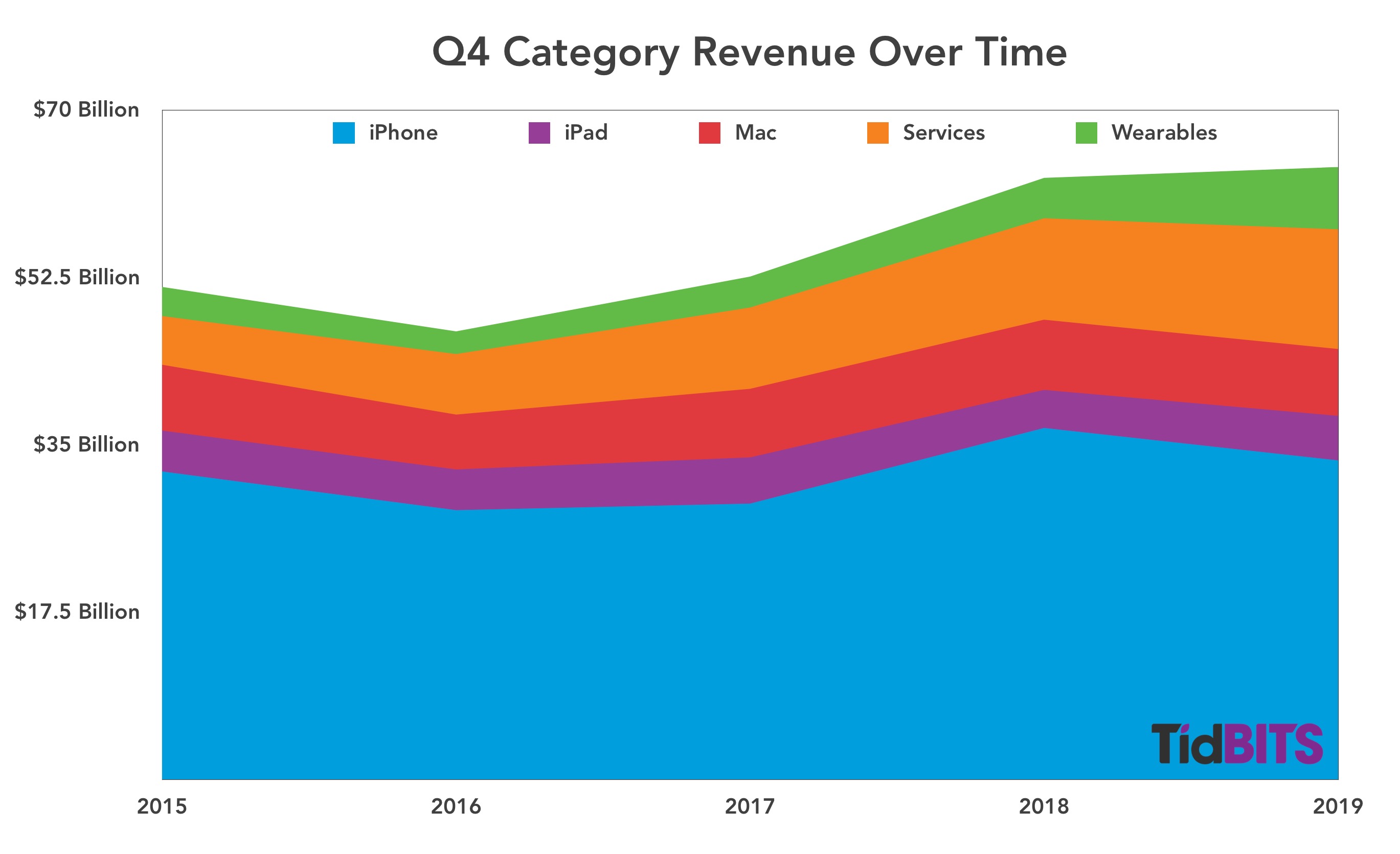 Apple saw double-digit revenue growth in all five of its geographic segments. Sales in the Americas exceeded $29 billion, roughly twice the sales numbers in Europe, the next-highest segment. Although sales in Greater China declined year-over-year, the drop-off was minor, at $11.1 billion this quarter versus $11.4 billion a year ago. Given the strained trade relations between China and the United States, Apple management viewed these results as encouraging. 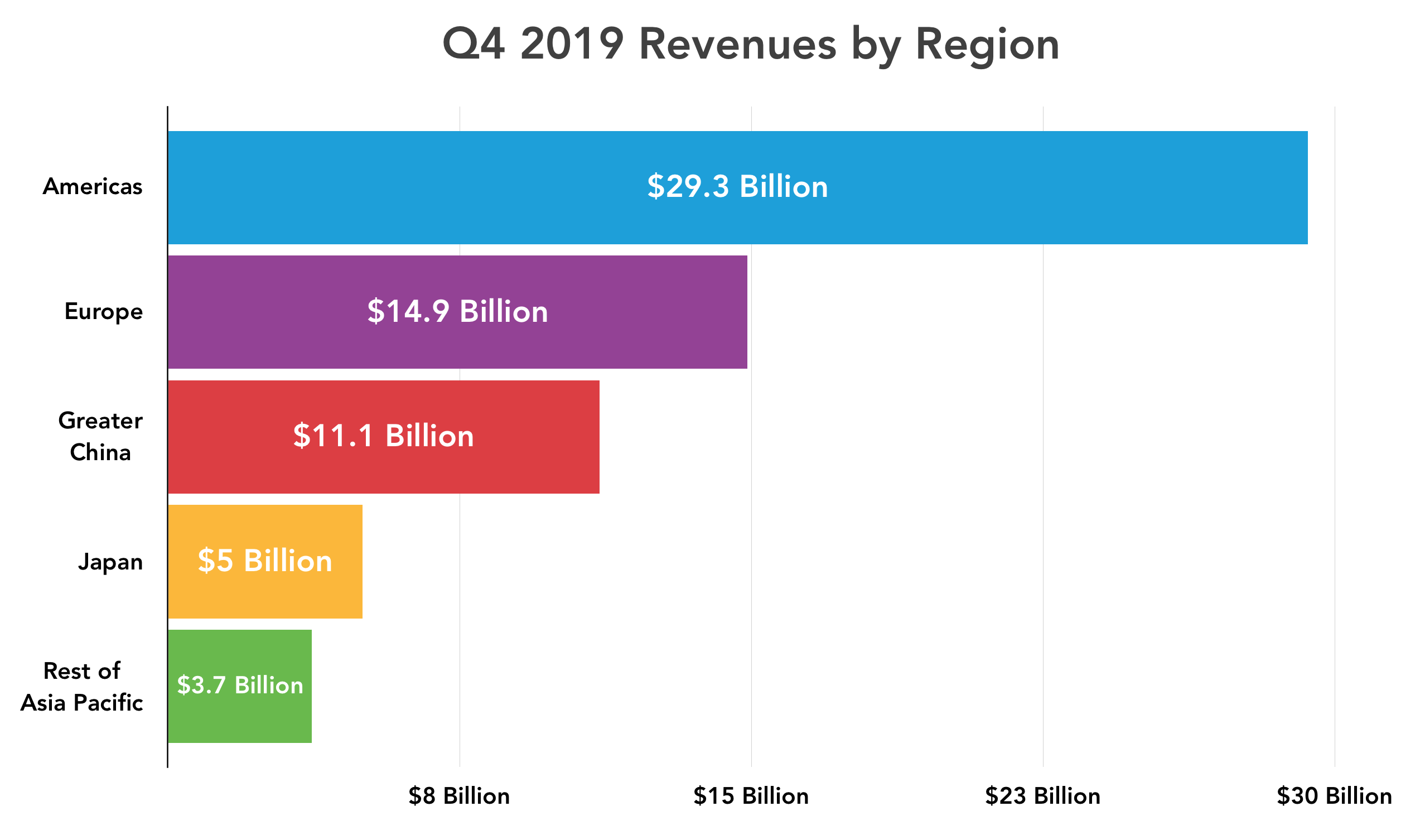 iPhone sales slid once again in Q4 2019, with Apple posting revenues of $33.4 billion, a 9.2% decrease compared to last year’s $36.8 billion. It’s less of a drop than the company experienced in previous quarters, but it’s still distressing in a quarter that saw the launch of the iPhone 11 and iPhone 11 Pro. Cook said that he was bullish on iPhone 11 sales, but such statements are to be expected. 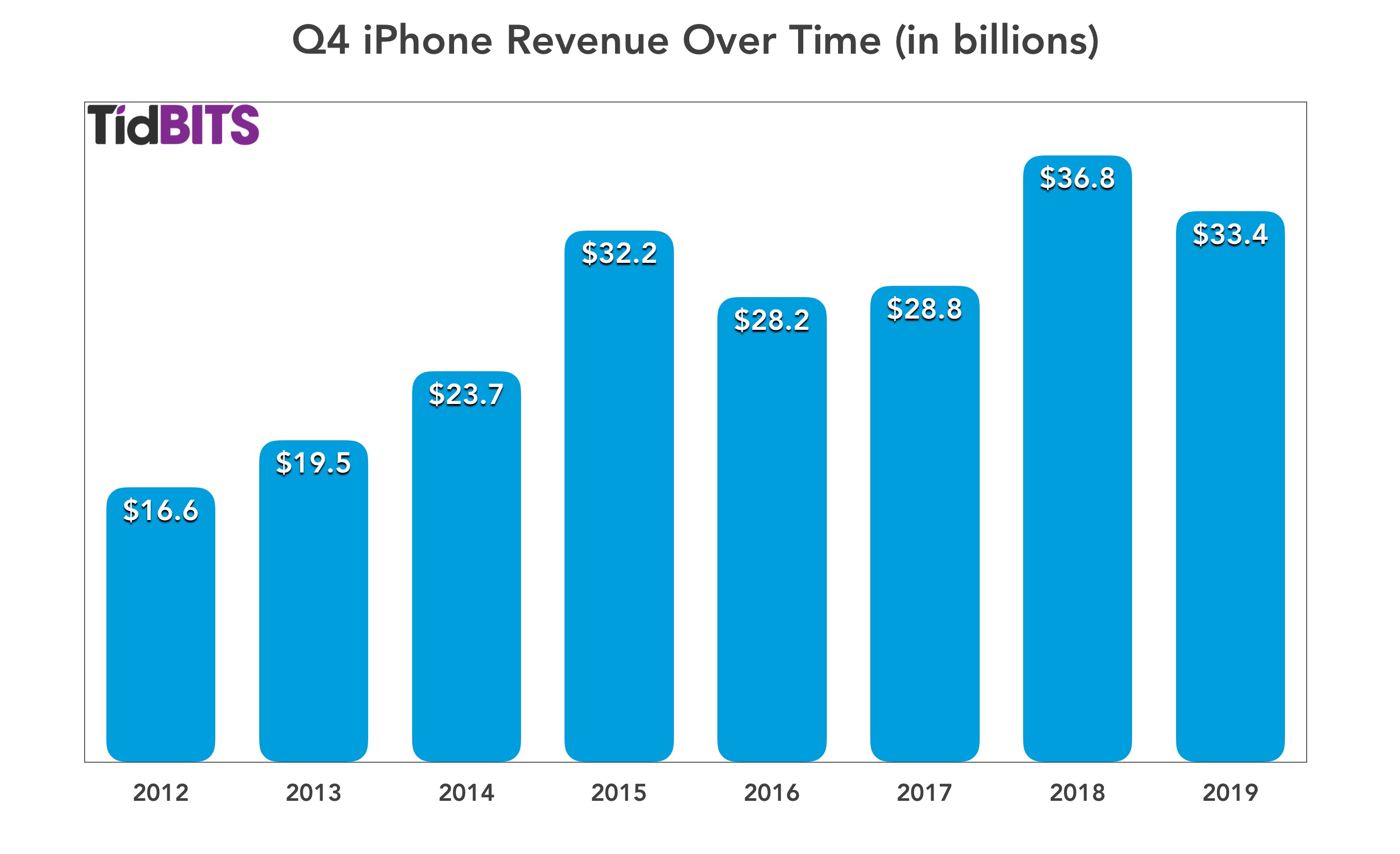 In contrast to the iPhone, the iPad saw a 16.9% revenue increase year-over-year with $4.7 billion coming in this quarter, compared to last Q4 2018’s $4.0 billion. Apple credited the iPad Pro and the strength of the overall lineup for the iPad’s strong performance—we’d also give credit to the aggressively priced seventh-generation iPad. Breaking iPad-specific features of iOS out into the new iPadOS may have helped as well by showing Apple’s commitment to the iPad platform. 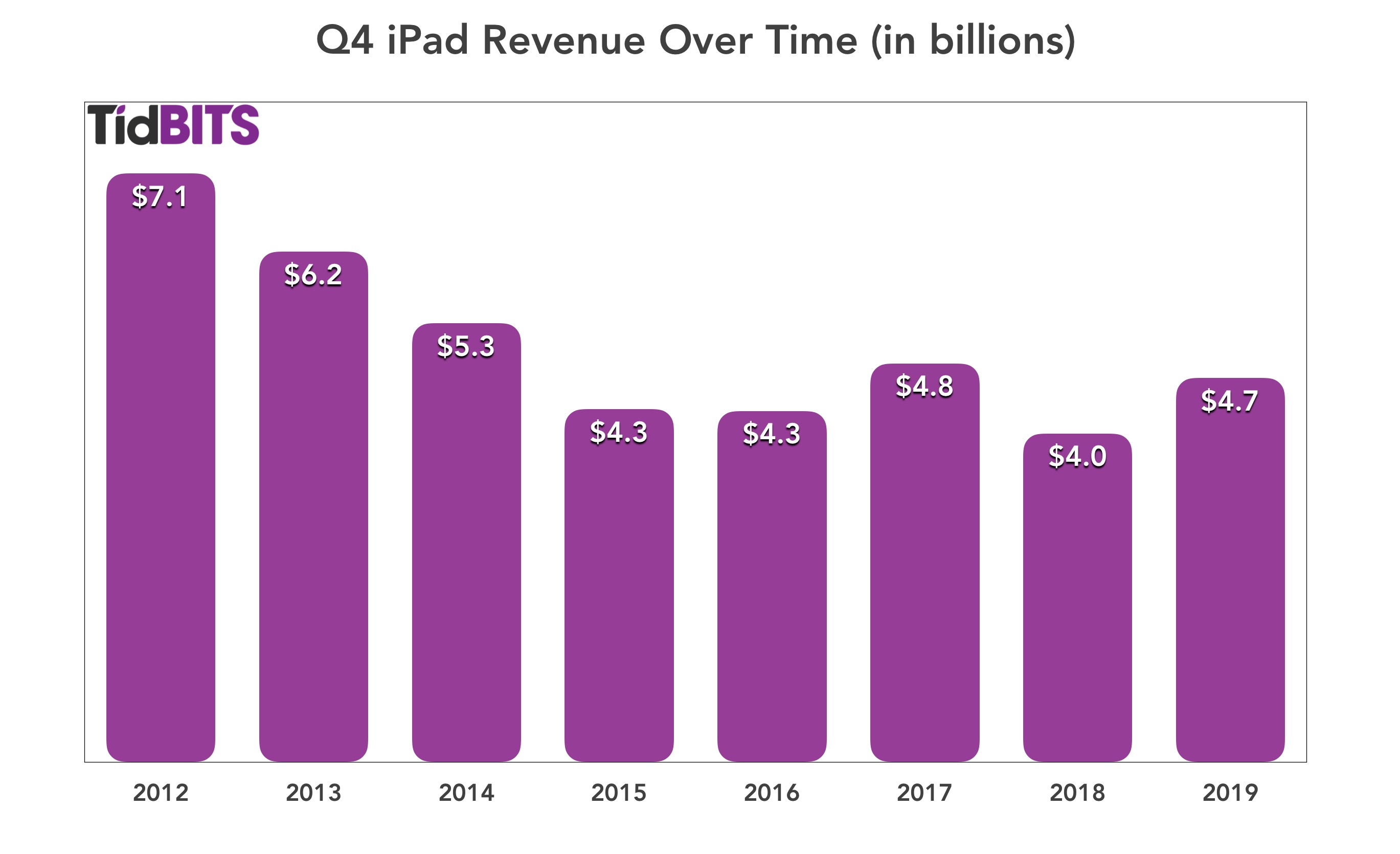 Mac revenues were down slightly—4.8% year-over-year—at $7 billion compared to last year’s $7.3 billion. Cook blamed the drop on the company releasing two MacBook Pro models last year but failing to release even one this year. Nonetheless, the overall 2019 revenue achieved by Apple’s Mac business is the highest ever, and Cook expects an additional boost to future Mac revenues with the release of the new Mac Pro (and possibly the rumored 16-inch MacBook Pro?) before the end of 2019. 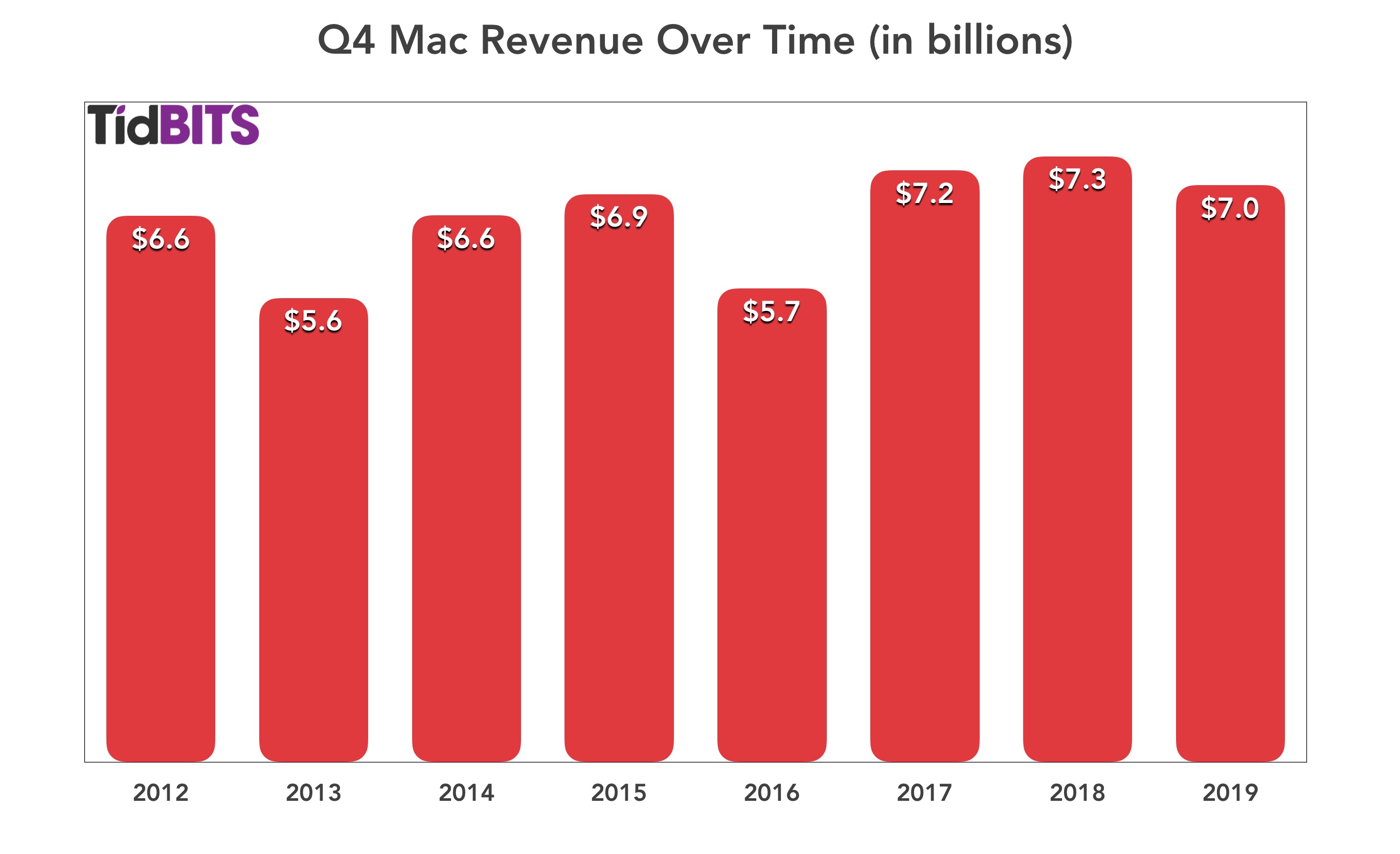 Unsurprisingly, given the attention Apple has been paying to this segment, Services revenue skyrocketed by 18% over the past year, bringing in $12.5 billion, up from last year’s $10.6 billion, with all five of Apple’s geographic segments experiencing double-digit Services growth. Cook drew particular attention to Apple’s payment services, the revenues from which he said now exceed PayPal’s. He also used the opportunity to note that Apple Card users will soon be able to finance new iPhone purchases interest-free over 24 months. Whether Apple’s new Apple Arcade and Apple TV+ services will contribute significantly to this success story next quarter remains to be seen. 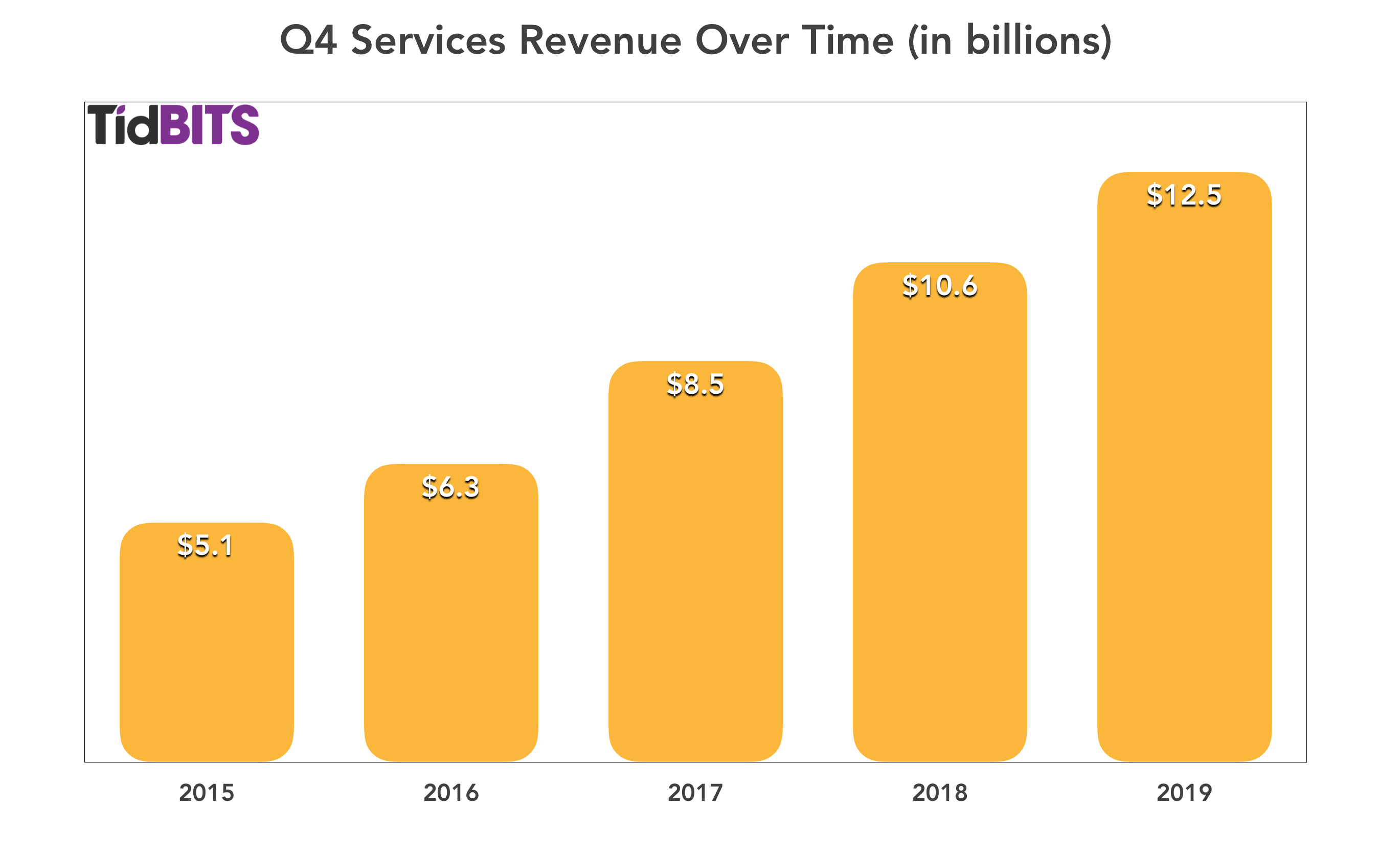 The Wearables category is where Apple’s growth has exploded in the past year, up a jaw-dropping 54.4%, bringing in $6.5 billion compared to last year’s $4.2 billion. That’s a lot of Apple Watches and AirPods, and the release of the AirPods Pro may boost the Wearables numbers even higher for the upcoming holiday quarter. This category alone brings in more annual revenue than two-thirds of companies in the Fortune 500.

A few years ago, the constant question surrounding Apple’s finances was: “What happens when the iPhone runs out of steam?” Now we know: Tim Cook and the Apple management team steered the company toward wearables and services, capitalizing on that enormous iPhone customer base. Apple’s Services segment alone has now reached the size of a Fortune 70 company. Investors can now be confident that the iPhone-fueled juggernaut that has been Apple in the 2010s isn’t a one-hit wonder.