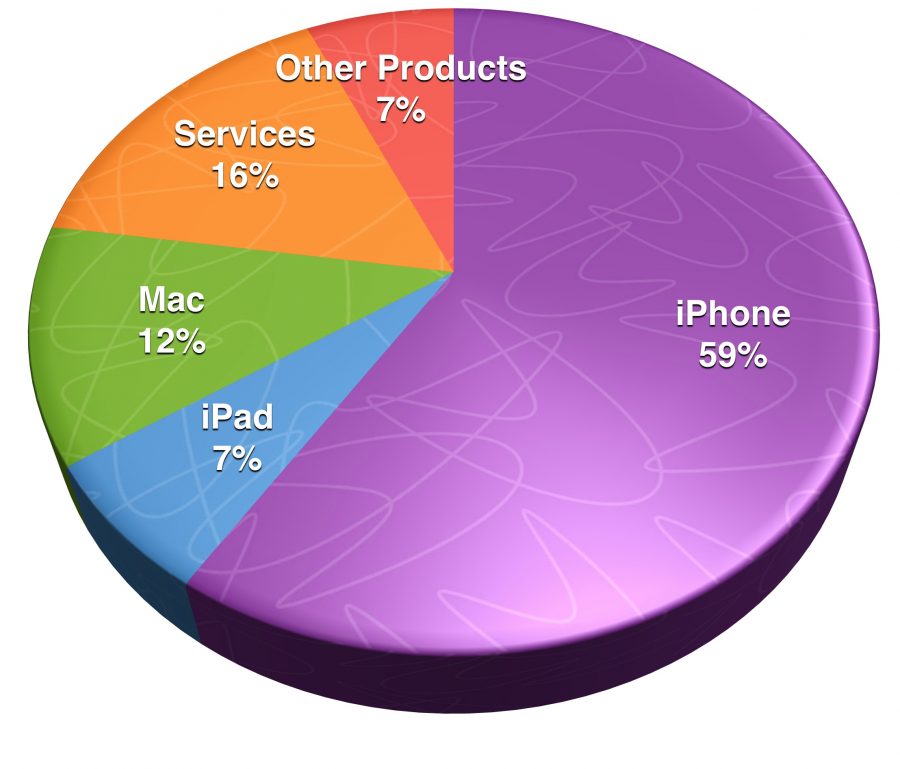 Reporting on its fiscal 2018 fourth quarter financial results, Apple has announced net profits of $14.1 billion ($2.91 per diluted share) on revenues of $62.9 billion. The company’s revenues are up 20% compared to the year-ago quarter, with quarterly earnings per share up by 41% (see “Apple Posts Strong Q4 2017 Financial Results,” 2 November 2017). 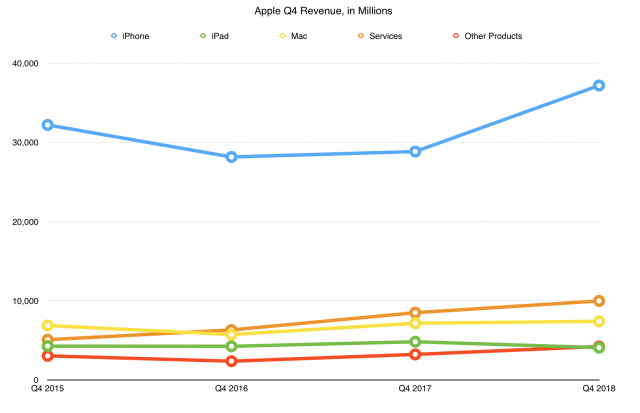 A standout contributor to Apple’s spoils this quarter was its Services business segment, which brought the company $10 billion in revenues, an all-time record and a 17% increase year-over-year. Services revenues have increased steadily for the past few years and have become an increasingly important component of Apple’s income. Apple now claims over 330 million subscriptions across its entire ecosystem, with 30,000 third-party subscriptions in the App Store.

As good as Services revenues were, though, they weren’t Apple’s revenue leader. Predictably, iPhone sales brought Apple the biggest chunk of its quarterly income, achieving $37.2 billion in sales, compared to last year’s $28.8 billion, a 29% increase. This increase happened, notably, in the face of essentially flat iPhone unit sales. The most logical explanation is the higher selling prices of the iPhone X, XS, and XS Max. In other words, Apple is squeezing more from its existing customer base.

This pattern of higher revenues despite flat or declining unit sales continued with the Mac. Although Mac unit sales were down by 2% year-over-year (5.299 million units versus 5.386 million), Mac revenue was up by 3%, adding $7.41 billion to the company’s total revenue. This represents a quarterly record for Mac revenues.

The iPad was Apple’s only product segment that showed both declining unit sales and declining revenues year-over-year—6% fewer unit sales and 15% less revenue. This comparatively large revenue decline associated with a smaller unit sales decline likely represents a larger percentage of lower-cost iPads, such as the $329 iPad introduced earlier this year, in the sales mix. Despite Apple’s heavy investment in the iPad product line, its tablets simply aren’t moving well compared to the rest of the company’s offerings. But the iPad is still big business, bringing in over $4 billion last quarter, and it remains a fundamental component of Apple’s Everyone Can Code program, which now includes 5000 schools. Note, too, that these iPad revenue and sales numbers don’t reflect the 2018 iPad Pro since it was introduced after the quarter ended.

CEO Tim Cook called Q4 a record quarter for the Apple Watch, but we still don’t know exactly what that means. However, Apple’s Other Products category—which includes the Apple Watch, Apple TV, HomePod, Beats electronics, accessories, and other stuff—had a 17% revenue increase year-over-year.

Apple continued to perform well internationally, with 61% of its sales coming from outside of the United States. Income from each of the company’s foreign market segments, from Europe to Greater China, was up, with Greater China’s $11.4 billion in revenues amounting to a 16% rise year-over-year.

Some conclusions we can take away from today’s announcements:

Cook clearly believes that the iPad is the future of computing, but the market doesn’t seem to agree. There have been a few bright quarters—particularly Q4 2017—thanks to Apple’s heavy investment in the product, but the overall trend for several years has been a decline in iPad sales. If the new iPad Pro doesn’t turn things around, it may be time for Apple to admit that the iPad ultimately is not going to be the future of computing, but merely an adjunct to the Mac and iPhone. We’ll take another look at these numbers in Q1 2019—which encompasses the holiday season—to see what the overall trend may be.

Unfortunately, Apple announced during its quarterly investor call that it will no longer be sharing quarterly unit sales, and will in the future only report revenues. That will make establishing the health of a product more difficult, since revenue numbers, while essential, are just only one part of the equation.