On a recent trip to Barcelona, my wife and I saw two T-shirts in a shop window: the Muppets as Reservoir Dogs and Cookie Monster in The Scream. Through the shop’s rain-streaked window, I took pictures of the shirts to send to our daughter, a puppeteer and a fan of the Muppets.

Later in the day, we decided that those T-shirts would make great Christmas presents for our daughter and granddaughter. But we had walked long enough and far enough in the meantime that we had no idea where the shop was located. We wandered around the area, searching for it in vain. Then I remembered the pictures I had taken of the T-shirts.

Apple’s Photos app has two special albums under the heading People & Places. Tapping Albums in the Camera app and then the Places album opens a map of your general location and displays stacks of photos with a count of photos in each pile.

Swiping left on the map brought Europe into view, and tapping the pile of pictures near Barcelona presented me with the grid of pictures arranged by the location and date where the photos were taken.

Double-tapping the map zooms in and distributes the pictures into smaller stacks that match their more specific locations. You can also pinch out to zoom in further to locate photos, assuming you know where to look. If you have a large camera roll, that’s a lot more efficient than endlessly scrolling through it, looking for the right photo. If you continue to double-tap on the stacks or pinch out, you will end up with a small enough number of stacks that you should easily be able to find the picture you’re looking for. 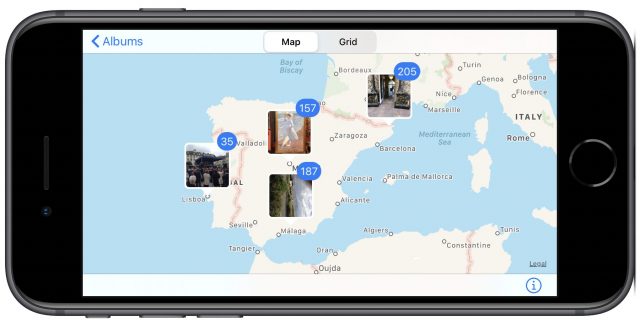 A single tap on the lower stack of 12 images brought me to the Places album showing those images, and then tapping the T-shirt image displayed it on my iPhone. (The top nine images were taken in 2014 on an earlier trip to Barcelona.)

When I swiped up on the photo, Photos displayed a map of the area with the thumbnail image of the photo where the shop was located. You can tap that thumbnail to open it on a full-screen version of the map and pinch out to zoom in for a more precise location.

However, it gets even better. Tapping the blue location title (Palacio de la Generalitat de Catalunya, Plaça de…) underneath the map causes Maps to open and display a large red map pin above the location title. Even more useful is that Maps lets you get directions to the location.

When I tap the Directions button, Maps indicates that, unfortunately for this example, no directions are available for getting to the T-shirt shop in Barcelona from my current location in Atlanta, 4500 miles away. However, tapping on “From My Location” lets me change it to, say, “From Cathedral of Barcelona,” after which I can tap the Walk icon at the bottom of the window to make Maps give directions for a short stroll to the shop.

(An earlier version of this article recommended the app Metapho for getting directions with Maps. At some point in iOS 13, Apple started displaying the address within Photos and letting us tap that to get directions in Maps, which is much easier. However, Metapho remains a fine app for looking at metadata stored with the photo.)

Other Uses for Places

Snapping photos on your iPhone can solve other location problems when you’re traveling. For example, imagine that your scheduled tour has just ended, and you are free to explore an unfamiliar city on your own. In many cases, there will be a meeting point to take the tour bus back to the hotel. You can take a photo to mark the meeting point and, if you use the procedure described above, get directions back to the bus.

One final recommendation. When you visit a new place, take a picture of the entrance. It serves as a marker within the camera roll for the beginning of images taken during your visit. That image might also be useful as the initial image of the site for a photo book, Web site, or slideshow. And you can recheck the exact location in the Places album.

So there you have it. Thanks to geolocation data stored within the photos you take, you can easily find a particular image by scanning a map for the location where it was shot. Even better, tapping that image’s location link in Photos gives you directions to get back to that spot using Maps.

Donald O’Shea is Emeritus Professor of Physics at Georgia Tech. He served as Editor of Optical Engineering from 1998 to 1999 and 2001 to 2009. He is the author of several textbooks in optics and optical design. His most recent is Designing Optics Using CODE V™, written with Julie L. Bentley (SPIE Press, 2018). He had subscribed to TidBITS from when it was distributed in HyperCard format, before the advent of the World Wide Web.