With each new iPhone model, it seems that Apple changes something that requires us to purchase a new case. Perhaps the dimensions change slightly, or maybe the cameras occupy more space on the back, or a button moves a few millimeters. (We won’t even get into the question of why Apple’s Jony Ive-led designers moved away from the thicker, more squared-off design of the iPhone 5 era, which was less slippery and enough easier to hold that many people went without cases entirely.)

So when I ordered an iPhone 11 Pro, I knew I would need a new case, and I decided to try something a little different. For several years, I’ve used wood-backed cases from Carved, but while they were attractive, protective, and gave me a grippy surface so I didn’t drop the iPhone, they offered no additional functionality.

Plus, I had grown weary of carrying both my wallet and my iPhone every time I left the house. I have long been the slightly obsessive sort who carries every card that I might need with me at all times, even though in real life, I mostly use only a single credit card. Could I downsize to an iPhone wallet case?

Two opportunities soon presented themselves. Twelve South came out with a new version of its BookBook case that makes the iPhone look like a tiny book, and Ekster released a leather iPhone wallet case that cleverly included internal slots to hold a SIM and a SIM extraction tool, ideal for frequent travelers or anyone who needs to swap SIMs regularly.

Twelve South has developed versions of its BookBook case for a variety of Apple devices. The conceit is that, when closed, the case looks like a leather-bound book, much as a book safe might attempt to nestle, undetected, in a shelf of books. It’s hard to imagine the disguise fooling people in a big way, but it’s an unusual, elegant look. 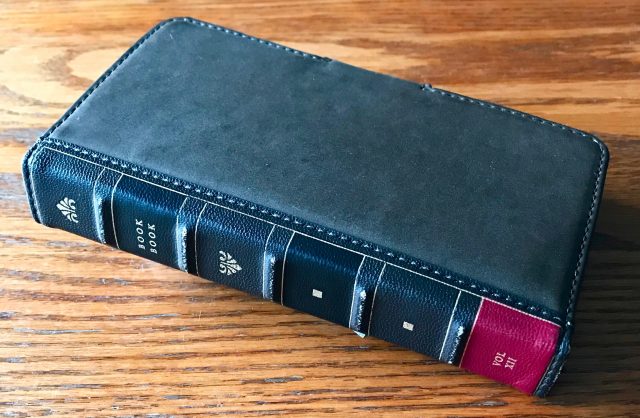 For the BookBook Vol. 2 iPhone case, Twelve South separated the “cover” of the book folio from the iPhone, encasing the iPhone in a standalone plastic and leather-backed shell that protects the iPhone when you remove it from the BookBook cover. The shell protects the back and all four edges of the iPhone, and it’s slightly raised in the front to keep the iPhone screen off flat surfaces when you set it face down. Cutouts provide access to the ringer switch, the Lightning port, the mic and speakers, and the cameras in the back—the side button and volume buttons are covered with flexible plastic. The shell is reportedly compatible with wireless charging. 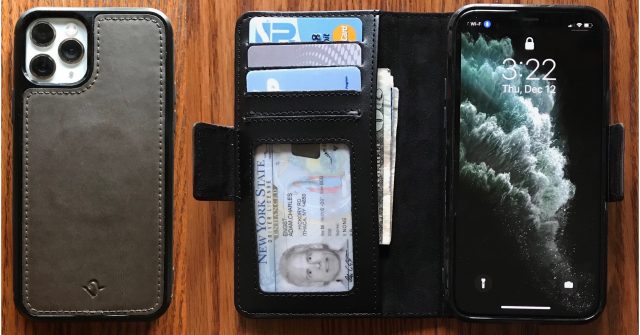 The inside of the front cover provides four slots to hold ID and credit cards, each of which can hold one or two cards, and a pocket can hold a number of folded bills. Don’t get carried away, though. If you put too many cards and bills in, the BookBook doesn’t close properly. The bottom slot has a plastic cover with a cutout that makes it easy to extract its card with a slide of your thumb through the cutout.

The iPhone shell attaches to the BookBook’s back cover, which has magnets that work with metal plates in the shell to make it easy to attach and detach the iPhone. A magnetic tab keeps the BookBook cover closed. (Twelve South says the magnets won’t cause problems for credit cards due to the design, and I experienced no issues during my usage.) A built-in viewing stand makes it possible to prop up your iPhone in landscape orientation—it’s a little tricky to figure out the first time or two.

Twelve South recommends putting the titanium Apple Card in the card slot with a clear plastic window, partly to keep the Apple Card stain-free (it may be bulletproof, but it’s easily marred), and partly to ensure that the titanium metal doesn’t scratch the iPhone screen.

The combination of the folio cover and the iPhone shell works well. It’s trivially easy to pull the iPhone out when you don’t need the rest of your wallet and put it back in when it’s time to leave the house. I could easily store four or five cards and some bills in the BookBook case, so I didn’t feel anxiety about leaving a potentially important card home.

There’s only one problem. Putting the iPhone in the BookBook case makes for a rather thick package, not something that you would want to slide into and out of your pants pocket regularly. I carry my iPhone in my front right pocket at all times, and although I could wedge the full BookBook case into my pocket, it wasn’t easy or comfortable, and I found it awkward to have to open the case each time. But if you carry your iPhone in a purse or suit jacket pocket, the thickness probably won’t bother you.

I’ll admit that what attracted me to the Ekster iPhone 11 Pro case was its claim that it included a slot for a SIM and a SIM extraction tool inside. On our past two trips to Europe, keeping track of the minuscule SIM and tiny tool was quite stressful (see “UK Travel Tips: Giffgaff for Cellular and Apple Pay for Transit,” 15 June 2018, and “Orange Holiday Europe: A Cheap 4G SIM for Your European Vacation,” 22 July 2019).

The Ekster wallet case is otherwise simple. Like the BookBook’s leather iPhone shell, Ekster’s entry is a leather-encased plastic shell that covers the back and edges of the iPhone and keeps the iPhone screen off the table when you set it face down. The premium leather edges make for a nicer feel than the BookBook’s plastic edges. Cutouts provide access to the side button, the volume buttons, the Lightning port, mic, and speakers, and the iPhone 11 Pro’s cameras on the back. It‘s also reportedly compatible with wireless charging. 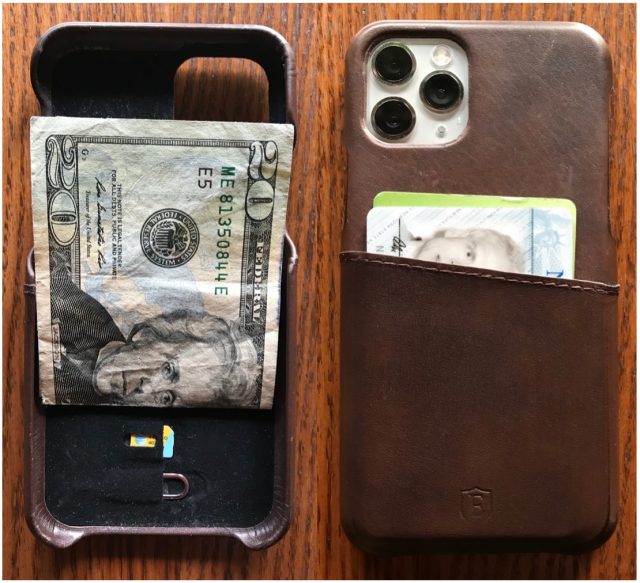 There are indeed little slots on the inside for the SIM and the SIM extraction tool. It’s easy to put them in, but quite a bit more challenging to get them out, given how small they are. I worried slightly that the metal tool would scratch the back of the iPhone, but that didn’t prove to be a problem even before I realized that Ekster intends for you to put your cash between the iPhone and the back of the case, covering the tool.

Most notably, the back of the leather case has a pocket that can hold two cards comfortably. Ekster’s specs say one card, but I’ve had no trouble with two, and I don’t feel comfortable driving without my license on me. You might be able to jam one more card in there, but it’s already tight with two. There’s nothing unusual about this design—lots of cases rely on something similar—but it is generally functional.

The Ekster case has become my go-to case because it doesn’t add so much bulk to the iPhone that it’s a problem to get it in and out of my pocket many times per day. When I go out, I usually don’t have to think about bringing my wallet because I know that I have my driver’s license and my primary credit card with me, along with two $20 bills.

Of course, there are exceptions. If I’m going to go to a doctor’s appointment, for instance, I grab my old wallet containing my full set of cards, so I’m sure to have my insurance card. When I travel, I also make sure to bring the old wallet so I have the insurance card, additional credit cards in case something goes wrong with the main one, and more cash. Only once so far in six weeks of regular use have I lacked sufficient cash for the day, and I haven’t yet needed an additional card that I didn’t have with me.

My only criticism is that constantly rubbing the edge of the credit card against the inside of my pocket is slightly damaging the card, causing the laminated top coating to peel off. My New York State driver’s license appears to be solid plastic without a laminated coating, so I’m trying to keep it on the outside to protect the credit card. A design that completely covered the cards would be preferable, but it would need to provide a way to extract them easily. Also, I don’t carry my Apple Card, but it’s possible that the leather of the Ekster card slot would stain it over time.