Although Apple’s overall results are very good—record-breaking, in fact—a look at the individual product categories reveals a more nuanced story, with income up for iPhone, Wearables, and Services, whereas both iPad and Mac sales were down in comparison to the year-ago quarter. 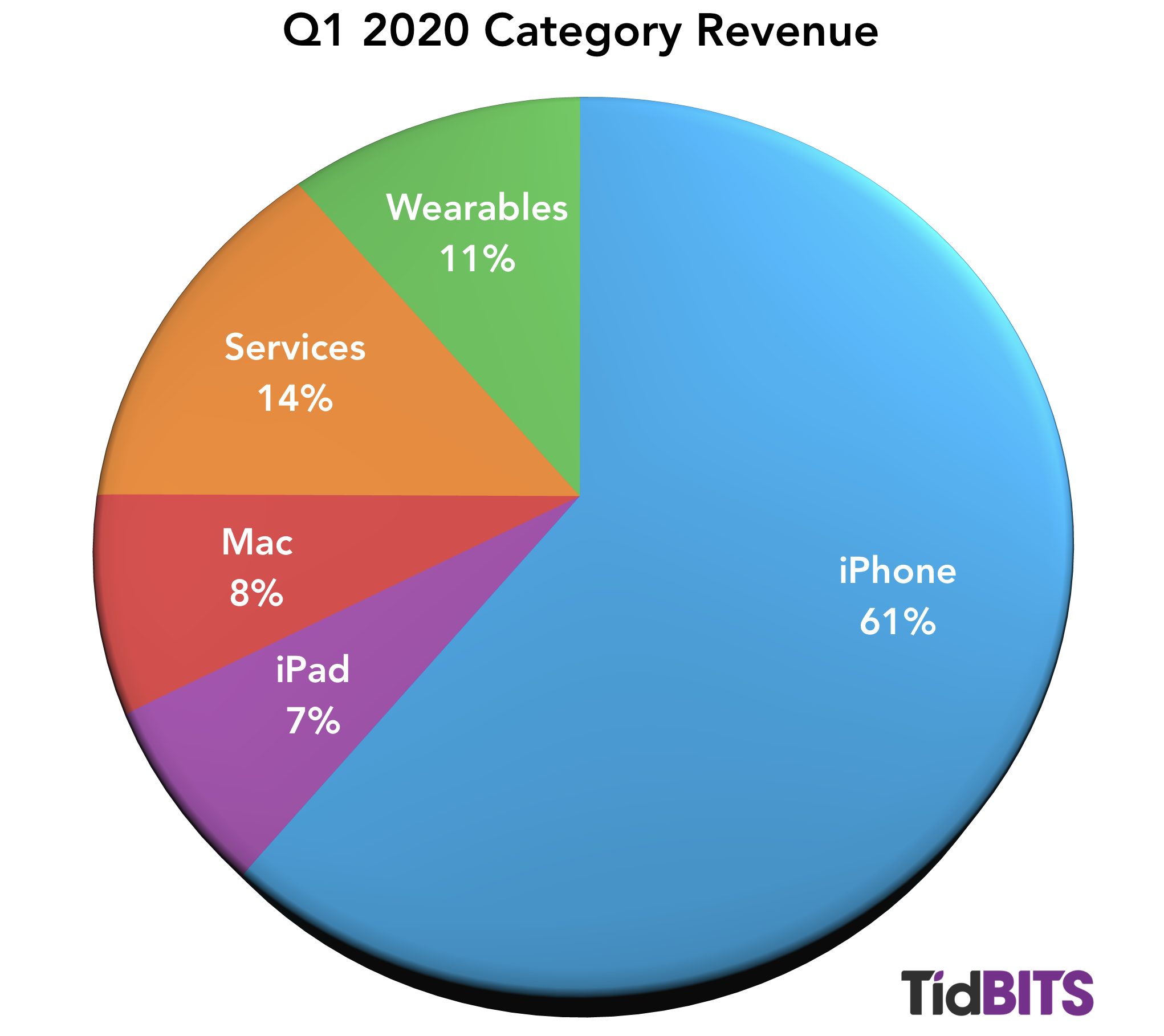 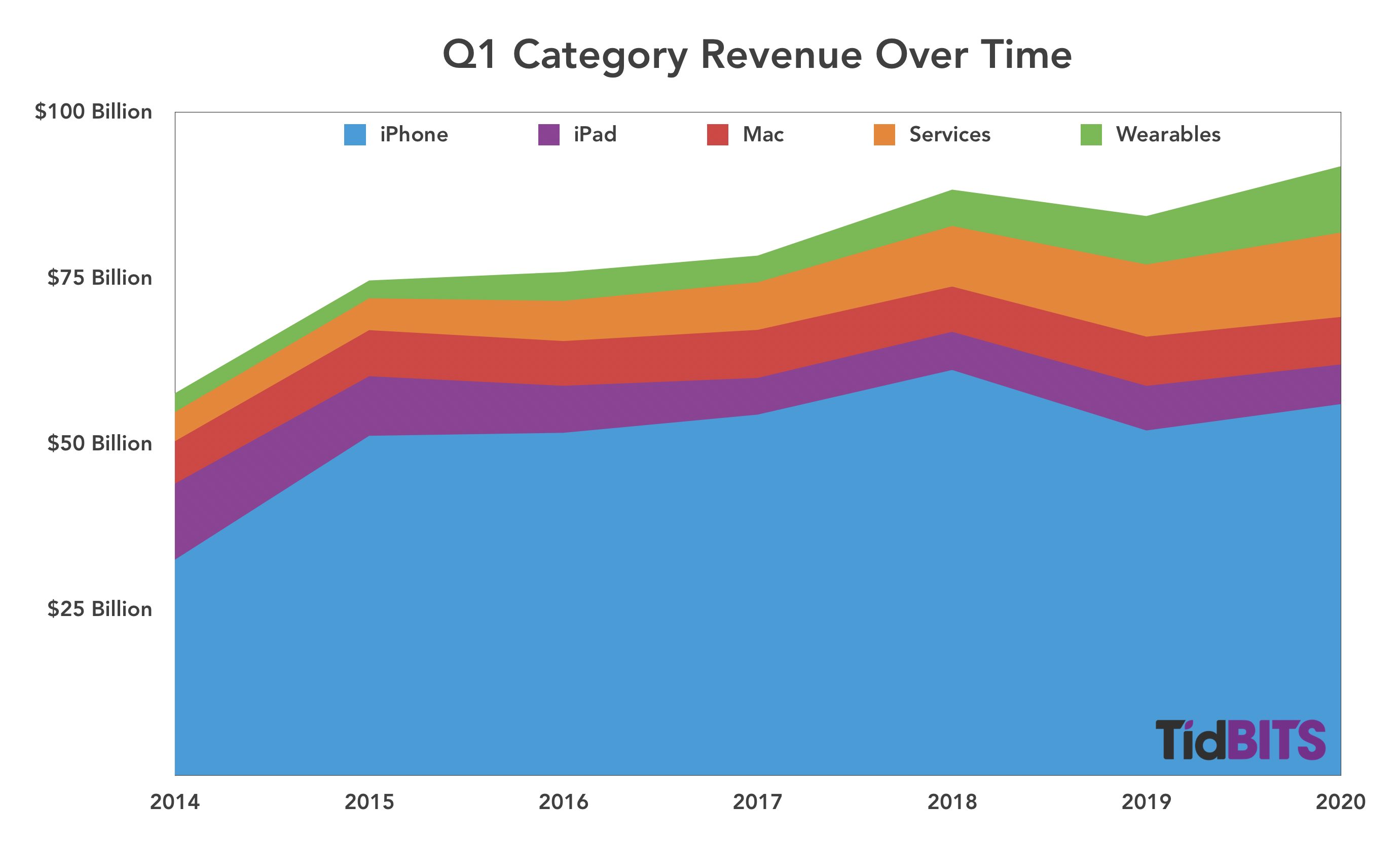 Apple saw double-digit sales growth in the Americas and Europe, but only modest gains of 6.5% in Asia Pacific and 3.1% in Greater China, as well as a 9.9% decline in Japan. However, the China revenue growth, though low, is a cause for optimism, as it reverses that geographic sector’s revenue declines in recent quarters. In Europe, Apple brought in $23.3 billion, and sales in the Americas hit $41.4 billion. 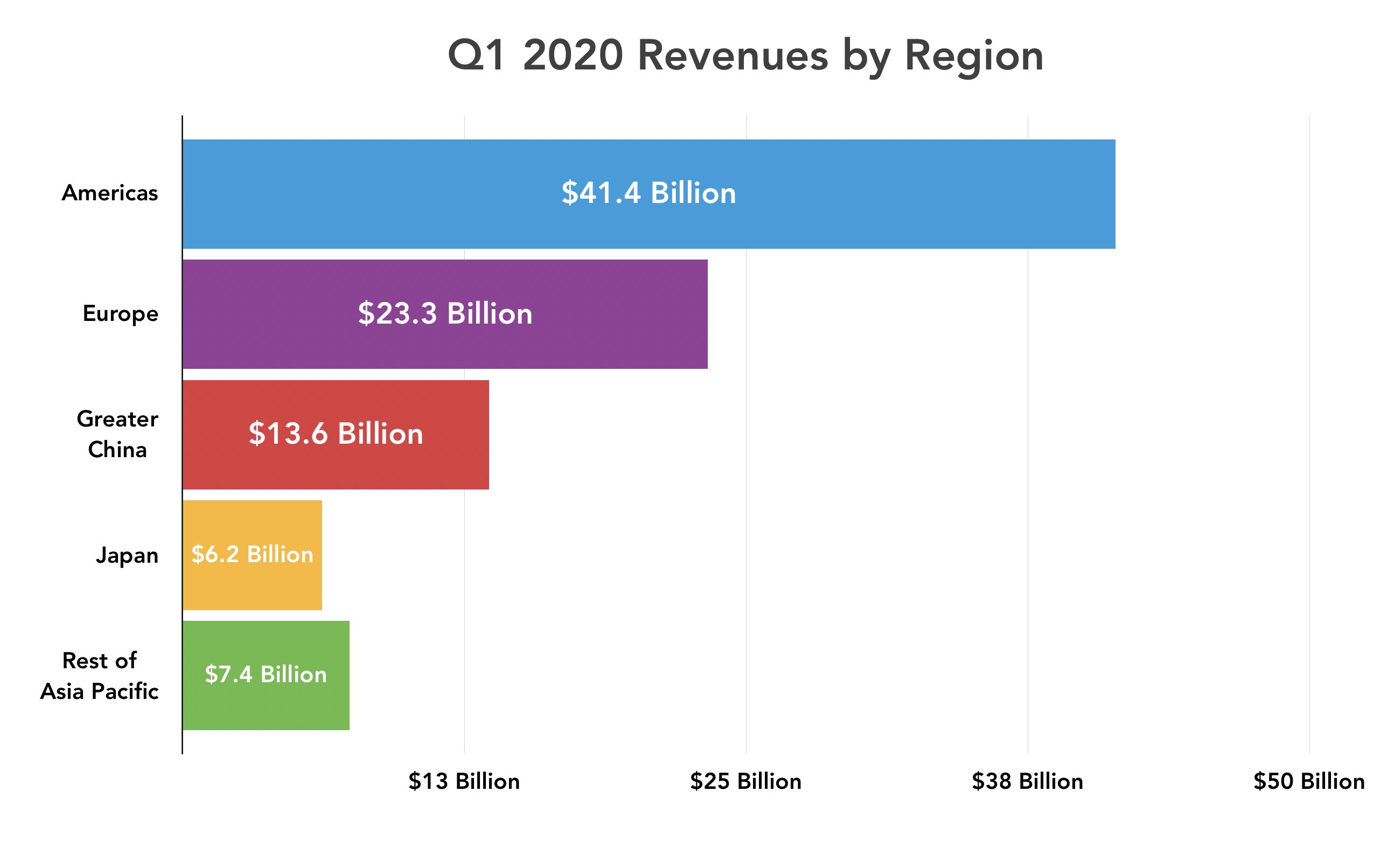 Apple faces a unique virus threat for the current quarter. Not a computer virus, but coronavirus, which was a topic in the quarterly investor call. CEO Tim Cook confirmed that Apple does have some suppliers in the Wuhan region, which is the epicenter of the outbreak, and that their facilities would be closed until at least 10 February 2020 at the recommendation of the Chinese government. Apple has closed all of its stores and offices in mainland China until 9 Feburary 2020. Apple has also halted all non-essential employee travel to China for now, and while the company is taking reasonable precautions, such as cleaning stores, it’s a factor ultimately beyond Apple’s control.

After a drop in Q1 2019, iPhone sales were up by 7.6% in Q1 2020, rebounding from $51.9 billion to $55.9 billion year over year. Cook said that the iPhone 11 was Apple’s top-selling model every week in the quarter. Cook credited the iPhone 11’s success in part due to the new payment plan available for Apple Card holders, showing the value of the credit card to Apple besides just interest and transaction fees. 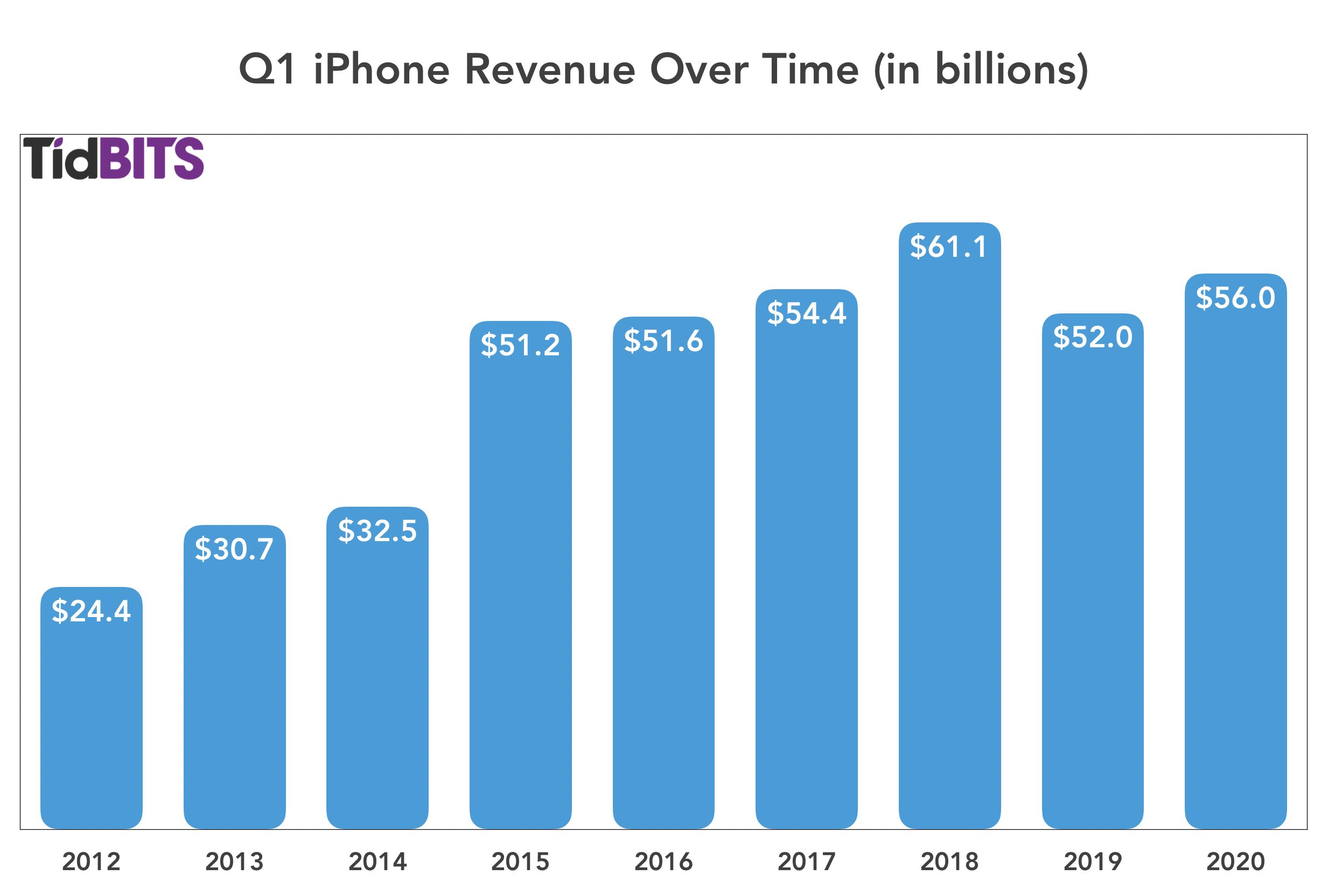 The iPad had a disappointing quarter, with sales dropping from $6.73 billion in Q1 2019 to $5.98 billion in Q1 2010, a double-digit drop of 11.2%. Cook, however, called out iPad sales growth in emerging markets such as Mexico and India. CFO Luca Maestri said that the decline can largely be explained by the release of the iPad Pro during last year’s first fiscal quarter with no such release this year. That does make sense, given that Q1 2020 is otherwise in line with the first quarters of 2017 and 2018. 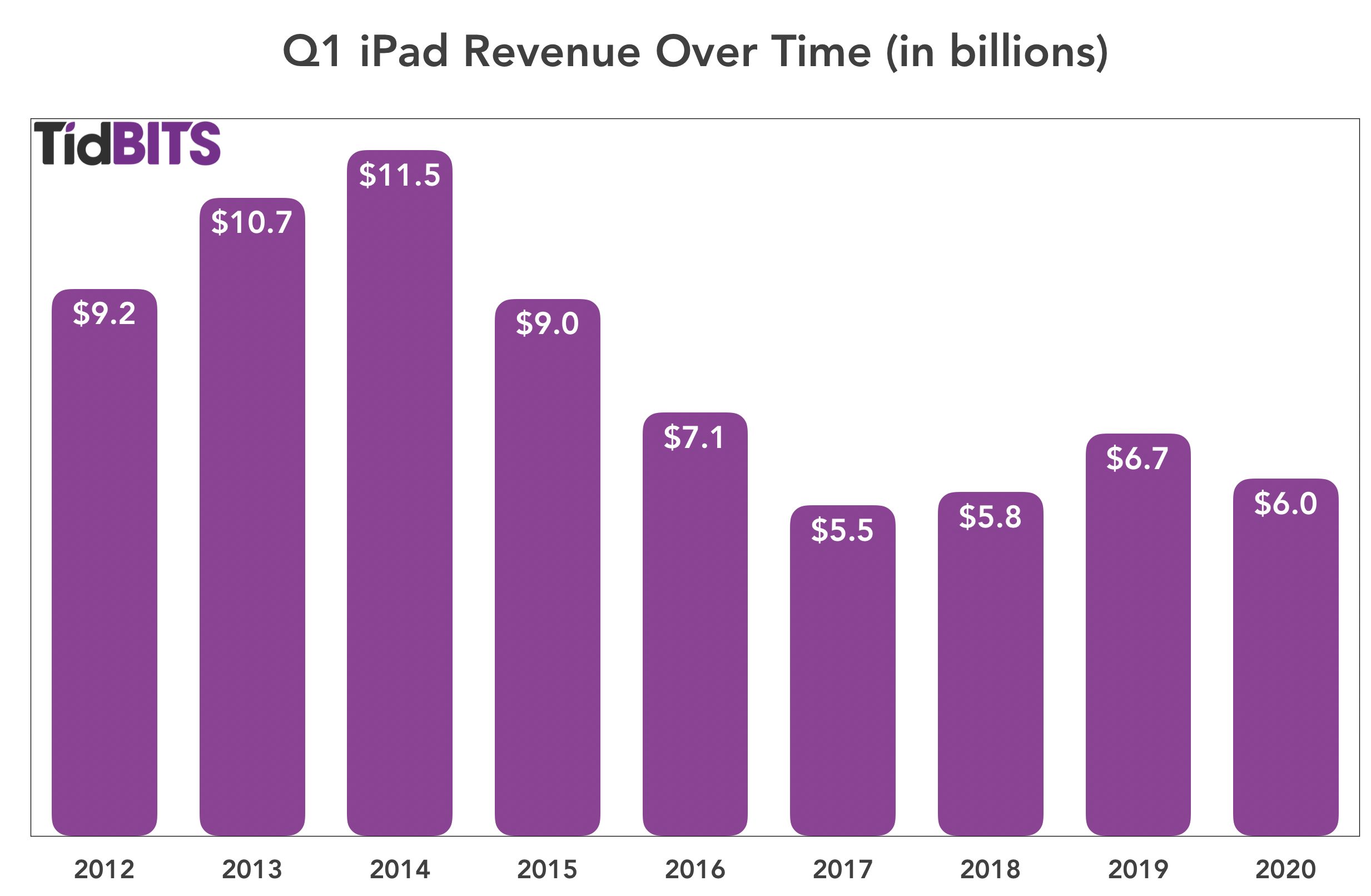 Mac sales were also somewhat disappointing, with a year-over-year decline of 3.5%. Apple sold $7.16 billion of Macs in Q1 2020, as opposed to $7.46 billion in Q1 2019. Although the Mac did see new models during the quarter, the release of the 16-inch MacBook Pro and the long-awaited Mac Pro may have come too late (or been too high-end) to make the kind of difference that last year’s release of the latest MacBook Air and refreshed Mac mini made. 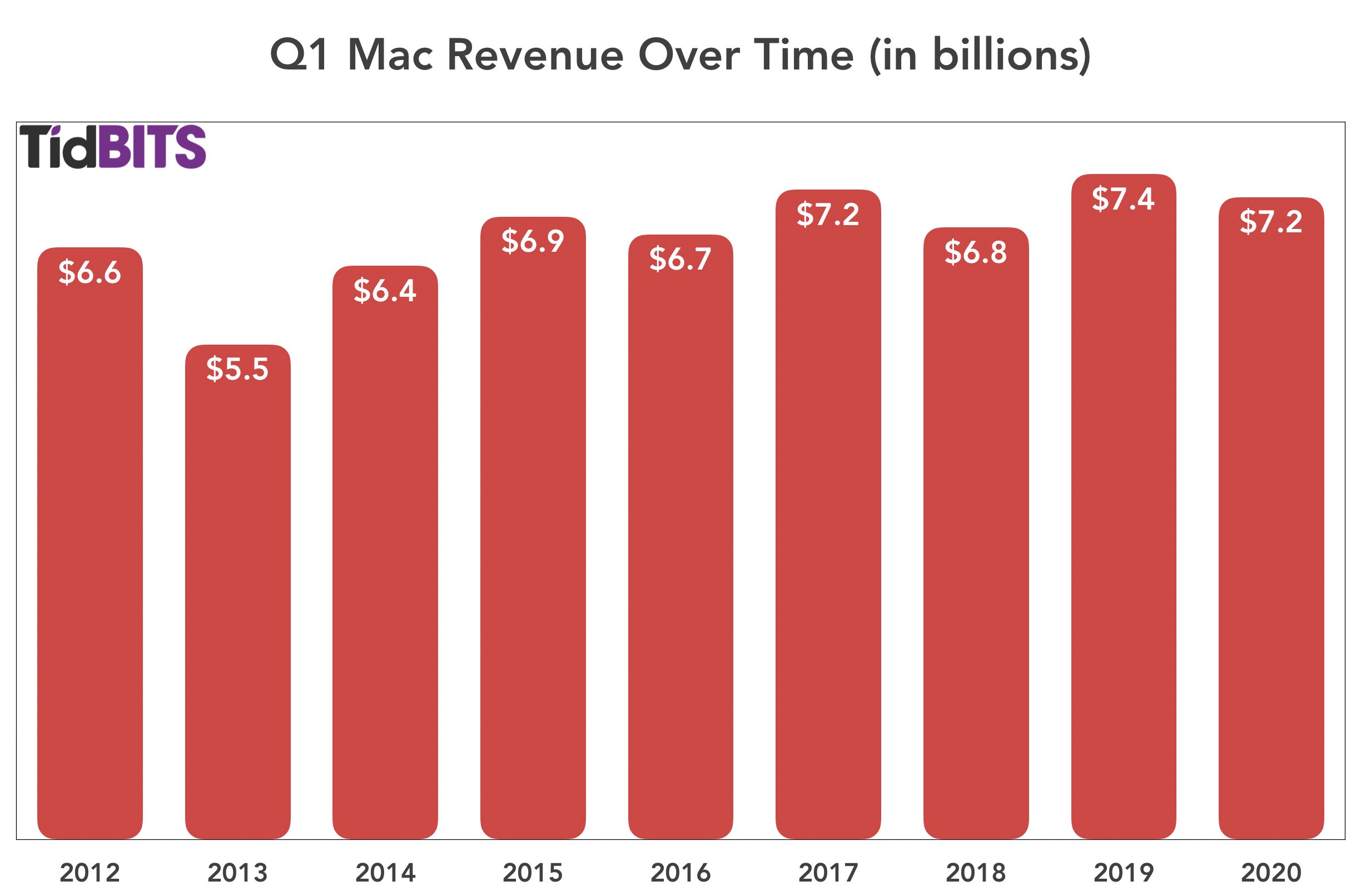 As has been the recent trend, Services saw tremendous year-over-year growth, up 16.9%, from $10.9 billion in the year-ago quarter to $12.7 billion in Q1 2020. “Apple TV+ is off to a rousing start,” Cook said, although we have to assume that most Apple TV+ subscribers received it for free with the purchase of Apple hardware. Services achieved double-digit growth in all of its geographic sectors, and Maestri reported that Apple now has 480 million subscribers to the company’s paid service offerings. Apple expects that number to reach 600 million by the end of this calendar year. 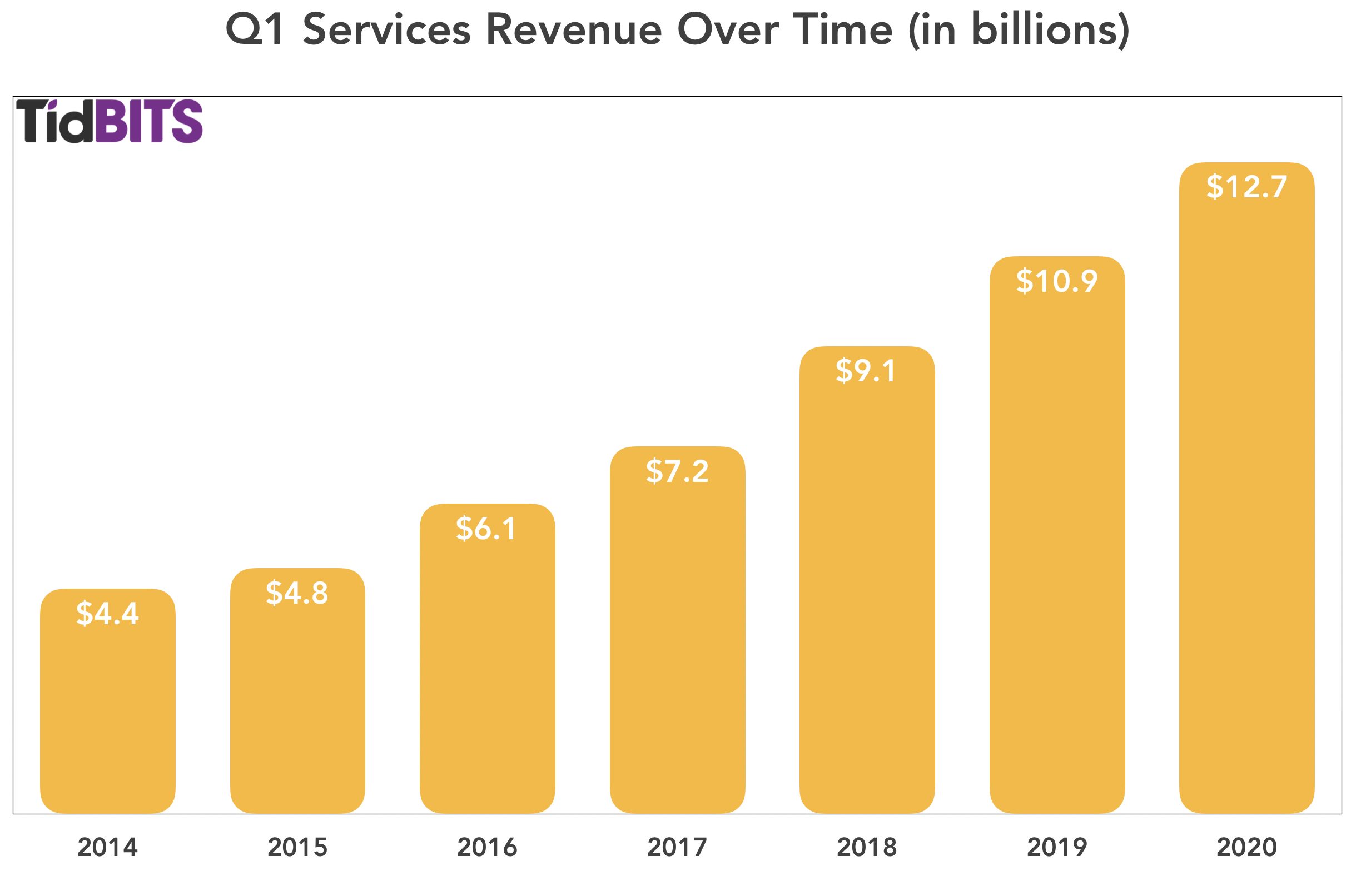 The Wearables category knocked it out of the park in Q1 2020 (Cook called it a “blowout quarter”), with an eye-watering 37% increase in revenue from last year, climbing from $7.31 billion in Q1 2019 to $10 billion last quarter. While Cook remains cagey with the real numbers, he said that the Apple Watch set an all-time revenue record in the quarter and that the Wearables category alone is now the size of a Fortune 150 company, largely thanks to the success of the AirPods. The AirPods revenues would have been even higher had the intense demand not created product shortages. 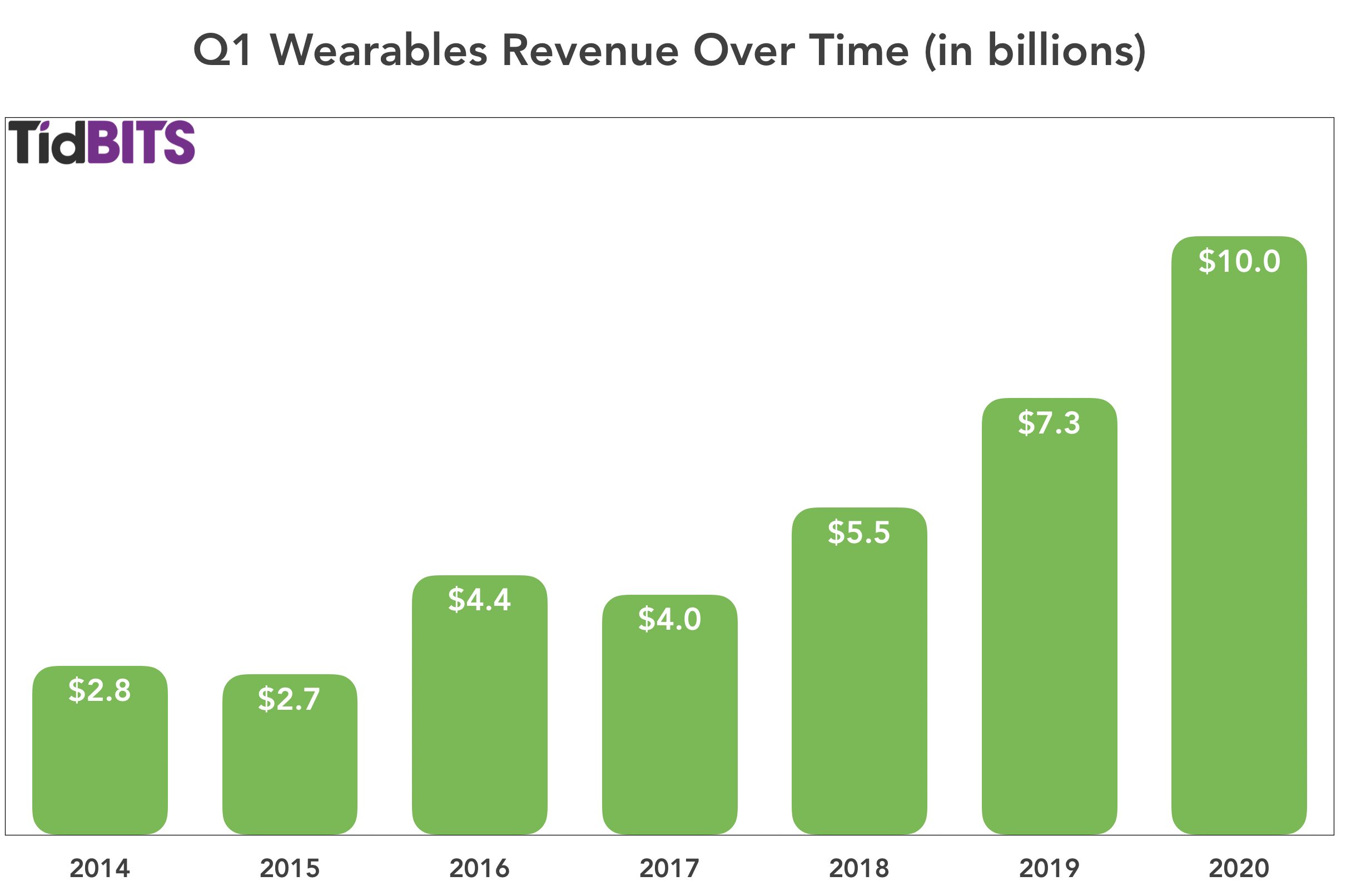 Apple’s revenues grow more complicated to track and forecast every year: for example, figuring out how Apple TV+ subscriptions contribute to overall Services revenue is complicated by the complimentary subscriptions Apple offers to new hardware buyers and by variable costs of producing Apple TV+ content—show business is like no business anyone knows!

In addition, Apple’s global supply chain and sales are always dependent on unexpected outside factors, such as the current coronavirus epidemic and political climate. Nonetheless, Apple looks to be on a roll, with its new products and services paying off and with more in the pipeline. You don’t need AR-enhanced glasses to see Apple’s near-term future as rosy.

Comments About In Apple’s Q1 2020, iPhone Rebounds and Wearables Soar