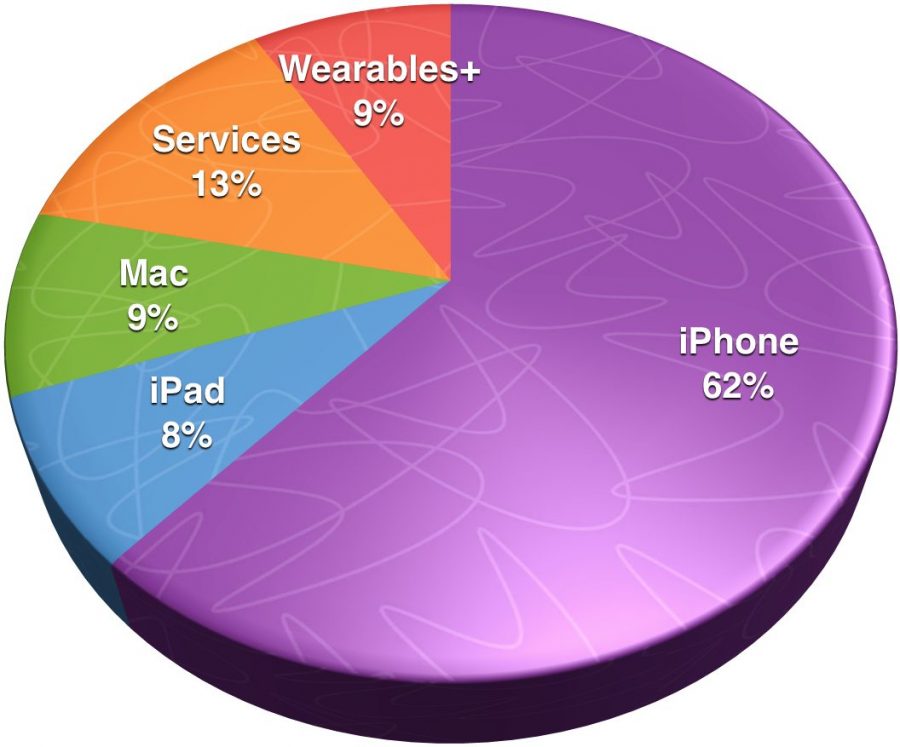 Apple had an unusually embarrassing January, opening the month with a rare downward revision of its earnings guidance (see “Apple Warns of Lower Revenues, Blaming Slower Sales in China,” 3 January 2019) and closing it out with the acknowledgment of a humiliating FaceTime bug on, of all days, Data Privacy Day (see “Apple Disables Group FaceTime to Block Glaring Privacy Hole,” 29 January 2019). As a consequence, Apple’s quarterly conference call with financial analysts sparked more than the usual interest.

First, here are the bare numbers for the company’s first fiscal quarter of 2019. Apple announced net profits of $19.96 billion ($4.18 per diluted share) on revenues of $84.3 billion. Those revenues are down 5% compared to the year-ago quarter, but the earnings per share are up by 7.5%.

Before we dive into the breakdown, note that Q1 2019 represents some significant changes in how Apple reports its finances. Apple no longer reports unit sales, though it still breaks out revenue by category. The Other Products category has been redubbed “Wearables, Home, and Accessories,” but for now we’ll use both names interchangeably, so as to chart that category’s historical trends. Also, the company is now reporting gross margin for both its physical products and its services.

We also want to point out that the Q1 2018 numbers shared by Apple in its Q1 2019 statement are somewhat different than what it reported a year ago—see “Apple Posts Record Profits in Q1 2018, Though Unit Sales Flatten” (1 February 2018). This is due to the fact that Apple now amortizes the cost of free services against the Services category and not the associated hardware category.

CEO Tim Cook spent much of his opening remarks pouring oil on troubled waters, noting that while Apple’s overall revenues were down 5% year-over-year, and that iPhone revenues were down almost 15%, the Apple ecosystem continues to hum along nicely. He called out the Greater China market as the most significant contributor to the revenue decline by far, but he also noted that revenues for China still grew slightly for the full 2018 calendar year. It’s also worth noting that combined revenues for the geographic segments other than China were up 1.1% over the year-ago quarter.

In contrast to the vexing iPhone revenue declines, both Cook and CFO Luca Maestri were pleased to point out that revenues increased for Apple’s other product categories. For example, Mac revenues were up by nearly 9%, iPad revenues increased 16.9%, and the renamed Wearables, Home, and Accessories category boasted a 33.3% revenue increase. Services posted increased revenues of 19.1% year-over-year.

In an indication of Apple’s efficiency, the company reported a 38% gross margin overall, and while the iPhone segment had only a 34% margin, the Services segment posted a whopping 62.8% margin. You can see why Apple wants to grow Services.

Other points of interest: Apple Pay handled some 1.8 billion transactions last quarter, Apple Music now boasts 50 million paid subscribers, and Apple News currently has 85 million users. That last one is important to remember, given that Apple may launch paid subscriptions in Apple News later this year.

One other note on the Services category, seen by many as the next big income growth category for Apple: Katy Huberty of Morgan Stanley remarked on the quarterly investor call that services revenue last quarter grew more slowly than it had in the past. Luca Maestri went to some trouble to explain that the perceived slowdown reflected changes in Apple’s accounting, including amortization of free services, foreign exchange rates (due to the strong dollar), and issues with the App Store in China.

There is a supposed Chinese curse (its Chinese origin appears to be an urban legend) that goes, “May you live in interesting times,” and these are indeed interesting times for Apple. In some ways, this is the first real test of Tim Cook’s leadership of Apple. So far, he is passing the test. Although iPhone revenues took a hit this quarter, Cook was wise enough to see that as inevitable. Growth in Apple’s other revenue categories shows that Apple isn’t just a one-trick pony. While Cook may not bring the pizzaz that his legendary predecessor was known for, he has proven himself to be a steady hand at the wheel. Apple could—and certainly has—done a lot worse.