A year after announcing it would not support older ScanSnap scanners with a 64-bit version of ScanSnap Manager, prompting this article, Fujitsu abruptly reversed course. For details, see “Surprise! Fujitsu Releases 64-Bit ScanSnap Manager for Older Scanners” (27 July 2020), or just keep reading for a review of ExactScan.

Fujitsu ScanSnap scanners became wildly popular many years ago by simplifying the process of going paperless. Their user-friendly hardware and uniquely simplified scanning software created a package that took the chore out of building a feature-rich, personalized scanning workflow.

But ScanSnap Manager, the magical desktop software that’s the secret sauce to this solution for the older generation of scanners that many of us are still using, is 32-bit software and therefore not compatible with macOS 10.15 Catalina. Owners of perfectly functional older ScanSnap scanners face the difficult choice of either having to buy a new scanner or stay on macOS 10.14 Mojave.

Except that there’s another option—third-party scanner software. One such product is Hamrick Software’s VueScan Professional product, which I reviewed at length last year (see “VueScan: Not the ScanSnap Replacement You’re Looking For,” 2 December 2019).

While extremely capable and apparently a working solution for many people, VueScan Professional is a far cry from the ScanSnap Manager experience and suffered from various problems that I called out in that article.

But there’s another contender out there, ExactCODE’s ExactScan Pro. Is it a more viable alternative to ScanSnap Manager? Let’s take a look.

ExactScan comes in three varieties: the basic product for $79.99, the Pro version that adds OCR for searchable PDFs and other features for $99.99, and the Enterprise version that supports high-speed scanners for $297.50. ExactScan Pro hits the feature sweet spot, matches ScanSnap Manager and VueScan Professional most closely, and will be the focus of my review.

ExactScan Pro supports a wide variety of scanners, but you will need to check the compatibility page to make sure your scanner is supported before you purchase. You’ll notice that list includes a number of ScanSnap scanners, including the popular S1300 model that I own and used in my previous tests.

If your scanner is in the list, head over to ExactScan’s download page for the free 14-day trial. During the trial period, scans get a small but prominent red banner at the top of scanned pages, but otherwise, the software is fully featured.

Once launched, ExactScan Pro presents you with the following interface: 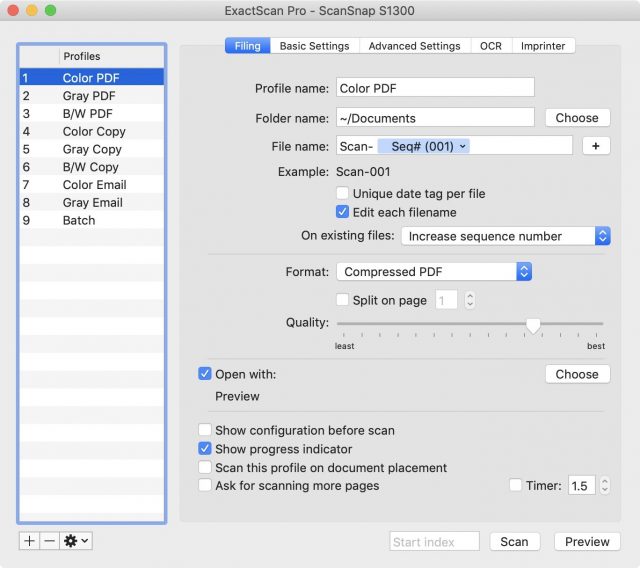 Unlike VueScan’s Basic, Standard, and Advanced levels of user interface complexity, ExactScan Pro makes all its features available all the time. While they’re also organized behind a series of tabs, the overall layout is more obvious and less confusing than VueScan’s.

Whereas VueScan’s profile management appeared to be an afterthought, ExactScan Pro puts workflow at the center of the user experience, providing a full profile management sidebar on the left panel of the main window. Since its profile interface works in accordance with Apple design guidelines, profiles automatically save changes you make. Better yet, you can access all your profiles by Control-clicking the app’s icon in the Dock. This simple feature, which I relied on when using ScanSnap Manager, is valuable because it lets you make a quick scan without having to enter ExactScan Pro’s main user interface.

ExactScan Pro comes with a variety of predefined profiles, which can serve as examples of how to use the various settings in different workflows.

Like ScanSnap Manager and VueScan Professional, ExactScan Pro offers all the features power users have come to expect, including:

ExactScan Pro also offers other options that ScanSnap Manager lacks, some of which could be useful and a number of which I’d probably never use. For instance, ExactScan Pro (like VueScan Professional) offers a feature to start scanning automatically when you insert a piece of paper into the scanner. This feature is quite useful as long as you remember to select your profile beforehand.

In addition, ExactScanPro lets you configure post-processing filters, such as adjustments to Brightness, Contrast, and Gamma. It applies these filters to all scans, which can be useful if, for instance, you have a batch of photos that all have the same editing needs. Higher-end photo editing software generally offers batch adjustments along these lines, but Apple’s Photos does not, making this feature of ExactScan Pro potentially more interesting for Photos users.

As much as ExactScan Pro worked as promised and allowed me to use my ScanSnap S1300, it, like VueScan Professional, has some quirks that I never faced with ScanSnap Manager. These are far from deal-breakers, but they show that ExactScan Pro, while highly usable and functional, still doesn’t quite match up to ScanSnap Manager.

In each of these cases, I reported the problem to our representative at ExactCODE and sometimes directly to their support team. While they were generally responsive, a number of my reports were dismissed as edge cases (see the comments for more on why).

ExactScan Pro bundles cropping and deskewing in a Media Detection pop-up menu. Whenever I leave that menu set to None, I end up with the white background of my test document getting filled with some type of color. It’s a washed-out color, but still not the true white of the original.

Changing Media Detection to Auto Crop and Deskew eliminates that background color. You can see that it’s nearly as white as it should be. That shouldn’t have anything to do with cropping or deskewing, but it seems to, which is troubling.

Weirdly, when I first chose the Auto Crop and Deskew option, the first page was heavily skewed, even though I had inserted it straight. This behavior was unusual—ExactScan Pro worked correctly most of the time, but it wasn’t just a one-time problem. ExactScan Pro has a “De-skew based on page content” checkbox that sometimes made things better and sometimes made them worse.

Regardless, ScanSnap Manager always worked properly in my experience, so I can’t help but feel a bit frustrated with ExactScan Pro here.

Another oddball issue I found—this one is repeatable—is that if I set the scan format to JPEG and select the Print With checkbox to send the scan to the printer, I get a message saying “No pages from the document were selected to be printed.” But when I change the format to PDF, it prints fine. 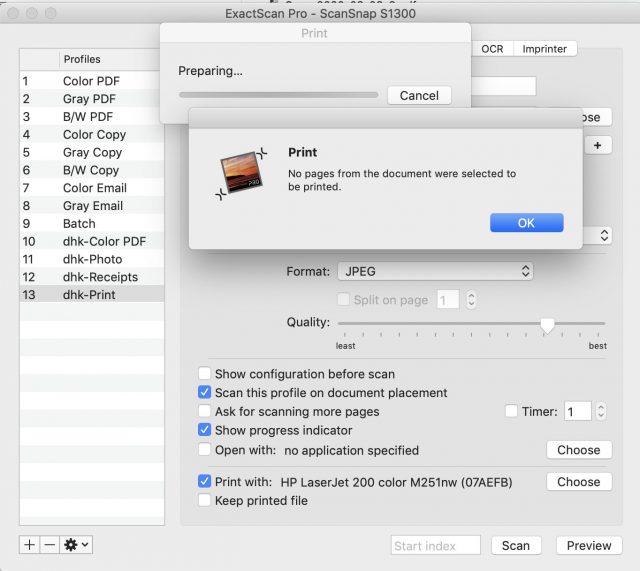 I raised this issue with ExactCODE’s support team, suggesting that, if they can’t make printing a JPEG work, then they should at least use an interface validation that prevents the user from selecting the JPEG+Print combination. They dismissed it as an edge case.

A Separate Email Is Created for Each Scanned JPEG

I found a checkbox buried in ExactScan Pro’s Preferences window called “Merge files in one batch.” Unfortunately, checking that box made no difference.

Fortunately, as with printing, scanning to PDF behaves as expected, creating a multi-page PDF and attaching the single file to a single email message.

Annoying as these anomalies may be, they’re easily avoided, and I generally found ExactScan Pro to be a highly usable scanning solution. Most importantly, it might finally allow me to upgrade to Catalina without losing access to my ScanSnap S1300.

I will miss the hassle-free, works-as-expected ScanSnap Manager experience, but I finally feel like ExactScan Pro provides a software alternative that will be good enough to move forward with. It’s not cheap, but it’s less expensive (and more environmentally friendly) than buying a new scanner. If you give it a try, I’d love to hear what conclusions you draw and if you find ExactScan to be your ticket to Catalina!

Comments About ExactScan Might Be the ScanSnap Replacement You Need