Many of you have been following our coverage of Fujitsu’s decision to effectively drop support for some of its older but still popular ScanSnap scanners by not updating the ScanSnap Manager software to 64-bit so it could run in macOS 10.15 Catalina. To keep those scanners off the trash heap, we evaluated and reported on some third-party solutions that will keep them running under Catalina, including VueScan (see “VueScan: Not the ScanSnap Replacement You’re Looking For,” 2 December 2019) and ExactScan (see “ExactScan Might Be the ScanSnap Replacement You Need,” 6 May 2020). Neither was perfect, but they got the job done.

A few weeks back, TidBITS reader Stephen Miller shared the shocking observation that Fujitsu had updated ScanSnap Manager to V7, with the company saying “We’ll soon be making ScanSnap Manager available for the new iX1500, as well as for earlier models.”

A quick check of the specifications in Fujitsu’s announcement showed that ScanSnap Manager V7 works in macOS 10.12.4 Sierra and later, including Catalina, and the “earlier models” include the S1500, S1500M, and the S1300 that I’ve been using for many years.

Still in a state of shock, I went to the ScanSnap Manager V7 download page and fetched a copy for my S1300 to see if it really did work under Catalina in the same way it did in prior macOS versions. 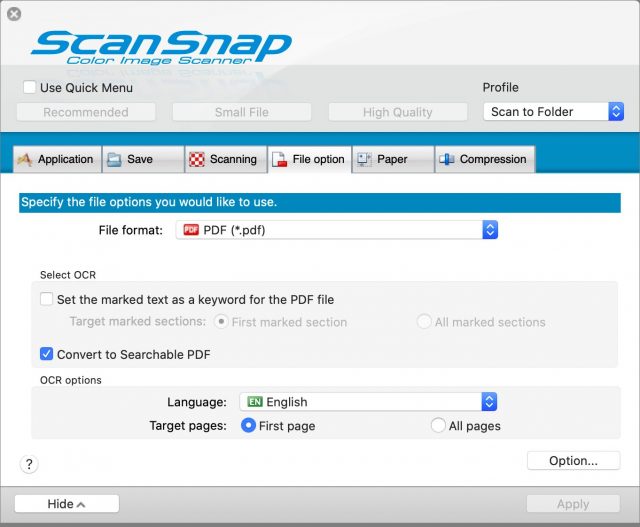 Amazingly, it does work. And it’s almost indistinguishable from its previous 32-bit incarnation. But let me share a few observations:

On the download page, Fujitsu added a comment about a few features in the 6.x (32-bit) versions that are not yet in the V7 (64-bit) version:

I’m not sure what the Searchable PDF Converter is, but it must not be the essential Convert to Searchable PDF feature that still has a checkbox in V7. I tested the latter just now in V7 and confirmed that Spotlight finds the document by searching for some of its content.

Although I haven’t done a comprehensive analysis, my takeaway is that all my key workflows still work, and all the features I remember seeing in ScanSnap Manager still appear to be there. It seems too good to be true, but it is.

Why Did Fujitsu Change Its Mind?

To me, this is the big question. Fujitsu announced it wouldn’t support Catalina well over a year ago, and many ScanSnap owners have already gone through the Five Stages of Grief and resolved to buy either a new scanner or one of the third-party software solutions I previously mentioned. In all likelihood, many have already done so.

One possible explanation is that the series of TidBITS articles on this topic and those from elsewhere on the Web may have resulted in enough negative press to get Fujitsu’s attention.

I contacted Fujitsu to ask why the company made this move, and I received the following explanation (which I reproduce faithfully, errors and all):

The reply does provide some insight, suggesting that providing a solid software solution for the company’s new, higher-end iX1500 model may also have been a driving force behind exhuming ScanSnap Manager from its 32-bit grave. Support for older ScanSnap models, like my S1300, may have been a secondary motivation, or just a welcome side-effect of that process.

Curious about the comment that “there is no support for scanners not supported officially under OS Catalina,” I checked the S1300’s compatibility status, and sure enough, the S1300 is now listed as compatible with Catalina.

This is fantastic news for ScanSnap owners, especially those who have not already purchased a new scanner or new software. I have copies of VueScan and ExactScan, but I’m just going to use ScanSnap Manager V7 under Catalina. I do miss the scan-on-insert feature those third-party products offered but not enough to switch from the familiar, seamless experience provided by Fujitsu’s native solution.

If you have a previously orphaned ScanSnap scanner, please try ScanSnap Manager V7 out for yourself and report back if anything doesn’t work as you expect it should!