Some of us have been living in videoconferencing sessions for months, which has presented many challenges. (“Kids, can you stop singing ‘Baby Shark’? I’m in a meeting” “Bill, can you grab the cat?”) One of them is the revelation of just how poor the video is that’s produced by the FaceTime HD camera on Mac laptops and iMacs. Apple has stuck with a low-quality, outdated 720p webcam through its very latest MacBook Air released this year (see “The 2020 MacBook Air’s FaceTime HD Camera Is Still Lousy,” 8 April 2020).

Meanwhile, Apple continuously improves the front and back cameras found in iPhones and iPads. The front-facing selfie camera in the iPhone 11 and iPhone 11 Pro records 4K video at up to 60 frames per second.

What if you could put your iPhone’s peanut butter in your Mac’s chocolate? The result is Reincubate’s Camo, a virtual-camera system that lets you treat the front- or rear-facing camera on your iPhone, iPad, or iPod touch as a full-fledged video source for many Mac videoconferencing, streaming, and video-editing apps. For dozens of compatible apps, Camo appears just like any camera built-in or attached to your Mac.

Unfortunately, it doesn’t work with FaceTime or Safari! However, compared to competing apps, like Kinomi’s EpocCam, which has been blocked by some Mac videoconferencing services, Camo has much wider support.

Why Camo Turns Your iPhone into a Great Webcam

Camo scratches an acute pandemic-era itch for Mac owners, particularly given the shortages of high-quality 1080p and higher-resolution USB-connected webcams, including several popular models from Logitech. Why not use the best camera you already own?

Many people with DSLR and mirrorless cameras are using virtual-camera software that lets them rely on those devices’ superior optics and lenses. However, the necessary software isn’t available from every camera maker or for every model, and the best solution, Ecamm Live, is priced for professionals at tiers of $15 and $25 per month. And if you don’t already have one, those cameras aren’t cheap! (If you do own one and the software doesn’t exist for your model, look into an HDMI-to-USB adapter; some electronics maker is pumping out an excellent generic adapter sold under many names, like this one for about $33.)

Camo comprises two parts: an iOS app for iOS 12 and later and Camo Studio for macOS 10.13 High Sierra or later. To ensure optimal video throughput and control, Camo Studio requires that you plug your device in via USB. (Connectivity via Wi-Fi and a Windows version of Camo Studio are both on Reincubate’s roadmap.)

Camo’s mobile app has no features: it merely provides a connection to Camo Studio, which has all the controls. You can choose among multiple connected devices, pick lenses (front or any rear lens), select resolutions up to 1080p (for now), and enable the built-in flash to add fill lighting. You can also rotate the image, zoom (and pan within the zoom), and control an array of video stream corrections and effects. 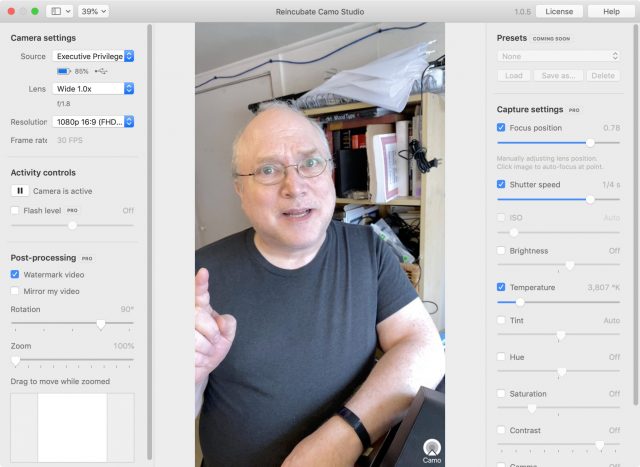 These settings include a critical feature that’s difficult to manage with both the Mac’s FaceTime HD camera and the iPhone and iPad: setting focus and keeping it there. The iOS Camera app lets you press to create an auto-lock, but it doesn’t offer a manual setting, as found in many third-party camera and video apps. In Camo Studio, select the Focus Position checkbox, and then you can adjust focus and lock it in place, which avoids the camera picking a point you don’t want or moving in and out of focus as you move around or other people come into view.

Tips for Using Your iPhone as a Webcam

Camo works best with a way to elevate and stabilize your iPhone or iPad so the camera is level with your head and you can look directly at or just below it, as you would with a standard webcam.

That can be tricky: you may need a stable monopod-like stand, a small tripod, or some kind of swing arm. Although it seems logical to want to mount your iPhone above a laptop or iMac display, all mounting hardware I’ve found—like the Mountie and Mountie Plus—works only as a side mount, probably for reasons of stability and center of gravity.

Reincubate published a lengthy article in which the writer tested a staggering array of tripods, arms, magnetic mounts, gimbals, and other ways to hold an iPhone or iPad into place.

In some of my presentations over Zoom, I use a camera or my iPhone to point at places where I’m demoing something, such as a laser cutter in a recent letterpress/laser-cutting workshop I taught online. I mounted a camera swing-arm on the wall near the laser cutter for overhead shots while it’s in action. I can use the laser cutter as an ersatz document stand, too, by placing a piece of foam core on top.

However, to use my iPhone in that way and control it from my Mac, instead of running Zoom on the iPhone, I use Zoom’s screen-sharing feature. In macOS, Zoom lets you tap into an iPhone or iPad that’s connected via USB or sharing its display to Zoom via AirPlay. But in that mode, Zoom just streams what’s on the iPhone or iPad’s screen—including any interface elements in, say, the Camera app—and puts the Zoom session into screen-sharing mode for you and everyone watching. That’s useful for software demonstrations, like a walkthrough, or playing a video or showing images, but it’s not great when you want to treat the mobile device as an additional camera for input. (I could launch Zoom and join the meeting from my iPhone, but some Zoom options are available only by directly interacting with the interface on that device, and other features can be used only from Zoom’s desktop apps.)

With Camo, I can simply use my iPhone as another standard camera input to Zoom, control how it appears, and use Zoom’s Video pop-up menu to switch between Camo and my iMac’s built-in front-facing camera. For other videoconferencing software that doesn’t allow bringing in mobile camera feeds via screen sharing or other methods, Camo is an even more useful upgrade.

What Camo Works With

You can use Camo with nearly all videoconferencing apps, though some require an extra step. Out of the box, you can use BlueJeans, Google Meet, GoToMeeting, Houseparty, Jitsi, and the big gorilla, Zoom (5.0.5 or later required). Firefox, Google Chrome, and Microsoft Edge are also directly supported, so Web apps that rely on video components in those browsers should also work without a hitch. People who stream on Twitch or record with ScreenFlow or QuickTime Player can use Camo directly as well. (Reincubate has an annotated list of supported apps.)

Some other meeting apps, like Amazon Chime, Cisco WebEx, and Microsoft Skype and Teams; collaborative team discussion software, such as Discord and Slack; and several other packages require Camo to strip a security setting from the app. Specifically, Camo has to remove the app’s signature designed to let macOS know if the app has been modified. Once you grant your permission and enter an administrative password, Camo makes a modification in how the app handles video that allows the use of its virtual camera.

Camo also integrates well with OBS (Open Broadcaster Software). OBS is an open-source video-stream mixer that lets you bring in different sources to create a single output that is itself a virtual camera you can use in other software and with live streams at Twitch, YouTube Live, and elsewhere. The mmhmm video-mixing/presentation software currently in beta testing also works natively with Camo.

The Downsides of Camo

If you use an app that Camo needs to modify to patch into, you do create a small security hole: once Camo has stripped the app’s signature, malware could modify it, but that malware would have to get on your machine, too. Reincubate is open about such drawbacks and other updating issues with its approach.

What’s Camo still missing? The company is frank about what it lacks, publishing a roadmap of features it hopes to add after version 1.0. You can’t stream 4K video yet, although that seems to be a priority. While the background-blurring “bokeh” Portrait mode in Apple’s Camera app only works for still images, Reincubate has that feature on its list of video options; Apple makes the depth data necessary to isolate foreground and background available to developers. (Reincubate is also looking at supporting Wi-Fi connections, but it’s understandable that the company started with the reliability and throughput of USB.

Camo also lacks green-screen or “chroma key” removal, where software replaces a solid-color backdrop with an image or other video. Zoom and other software include green-screen removal, and Camo’s virtual camera doesn’t prevent that. But if Reincubate built it in, the option would become available in any supported app.

The free version of Camo offers fairly little: just 720p resolution, video mirroring, rotation, and zoom, and it requires a watermark. Pay $39.99 per year to unlock Camo Pro, and all features become available, including removing the Camo watermark. The free tier is useful for testing out how Camo works with your setup and apps, however, so you know if it’s a good fit. Zoom also currently limits video to 720p in most cases, making higher resolutions less useful, though Camo’s other camera features are significant enhancements over the Mac’s standard FaceTime HD camera.

While I own a Logitech C920 1080p webcam that I use with my iMac, it’s not as versatile as my iPhone and has just a single lens. I find Camo a great addition to my video arsenal, which is a great thing to expand, given the indefinite future of remote business meetings, workshops, and presentations ahead of us.

Comments About Turn Your iPhone into a Powerful Webcam with Camo