The iPad lineup has been something of a puzzle for the past few years. At the top end are the thin-bezeled iPad Pro models, which have USB-C and are targeted at replacing laptops (see “Hell Freezes Over: Apple’s New iPad Pro Supports Trackpads,” 18 March 2020). The base-model iPad sat comfortably at the bottom with its bargain $329 price, and in recent years, it gained support for the first-generation Apple Pencil and other accessories. In the middle, the iPad Air, with its old-school design, support for only the first-generation Apple Pencil, and higher price tag, was something of an enigma. And of course, there’s the popular if often ignored iPad mini, which Apple at long last revised last year (see “Apple Quietly Releases New iPad mini and iPad Air,” 18 March 2019).

Now Apple has reworked the fourth-generation iPad Air to more closely resemble the 11-inch iPad Pro, and the lineup suddenly makes more sense. If you want more screen and less Home button, either a new iPad Air or an iPad Pro will meet your needs. That’s also the case if you want a second-generation Apple Pencil that won’t roll off your desk. The key is that, for many people, the new iPad Air will give them everything they like about the iPad Pro for $200 less.

Apple also updated the base-model iPad with a new processor. It’s nothing to write home about, but it remains an affordable and capable iPad that gets the job done.

You’ll be able to buy a new iPad Air sometime in October. Apple said that the eighth-generation iPad is available to order immediately and will be in stores on 18 September 2020. Both models will come with iPadOS 14.

Much of what’s new with the iPad Air is old news in the iPad Pro world, including the switch to a squared-off industrial design. There is one feature that’s completely new to Apple devices: a sapphire crystal Touch ID sensor in the top button. Apple has traditionally embedded Touch ID in the Home button, and later iPhones and iPads shifted to Face ID, except for a handful of budget models. But in the COVID-19 era, when many people are wearing face masks on a regular basis, Face ID has quickly become a significant liability. The addition of Touch ID to the top button is an interesting shift, and it might offer a clue to what Apple has in store for the iPhone 12.

The new iPad Air features a 10.9-inch fully laminated Liquid Retina display at a resolution of 2360-by-1640. That’s up from the 10.5-inch screen in the previous model, which had a resolution of 2224-by-1668. The pixel density remains at 264 pixels per inch, as do the other screen specs of P3 wide color, True Tone support, full lamination, and an antireflective coating. 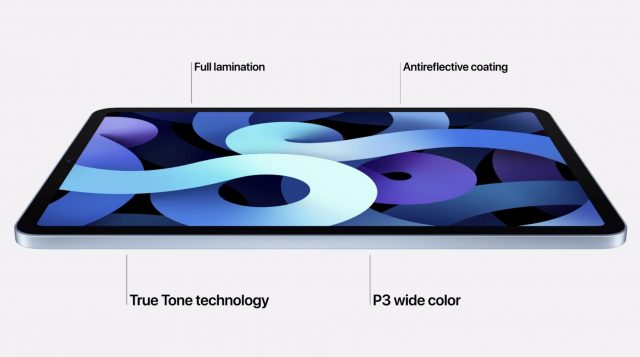 The iPad Air is powered by Apple’s new 6-core A14 Bionic chip, which is interesting because iPad models usually get either leftover iPhone chips or updated versions like the A12X. We’ll probably see the A14 Bionic in some of Apple’s next batch of iPhones. Apple claims a 40% increase in overall performance and power efficiency compared to the previous iPad Air. It also includes a 4-core graphics processor that Apple claims offers a 30% graphics improvement over the previous model. The A14 Bionic builds in a 16-core Neural Engine for improved artificial intelligence processing.

The fourth-generation iPad Air features a 28.6 watt-hour battery that offers up to 10 hours of Web surfing or video watching. As with the iPad Pro models, the new iPad Air swaps Lightning for USB-C for both charging and peripherals.

Like the previous model, the new iPad Air produces stereo sound, with left and right speakers (in landscape mode). It also continues to offer dual microphones for noise cancellation and greater call clarity. 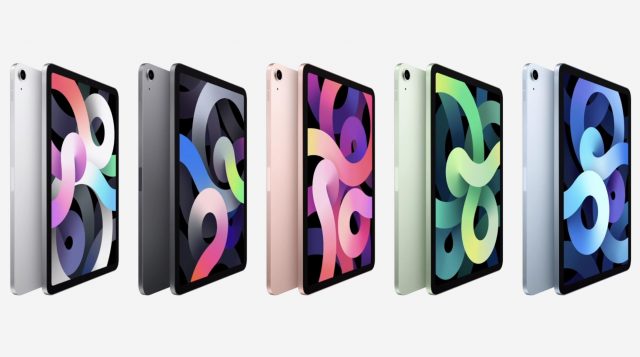 Apple has also updated the base-model iPad, with the only change being the move to the 6-core A12 Bionic from last year’s 4-core A10 Fusion processor. Otherwise, it’s identical to the seventh-generation model, with the same 10.2-inch Retina display and Smart Connector. The new model remains compatible with only the first-generation Apple Pencil and the Smart Keyboard, so it doesn’t work with the second-generation Apple Pencil and Magic Keyboard.