Many people think of the Accessibility options on the iPhone, iPad, and Mac as existing for people with some sort of disability, and that’s not untrue. However, features that make things easier for people with disabilities often end up benefiting others as well. For instance, curb cuts make it possible for people in wheelchairs to transition from street to sidewalk, but they’re also welcomed by cyclists, parents with children in strollers, anyone who needs the assistance of a cane or walker, delivery people, and more. Closer to home in the Apple world, I recently wrote about how much better the Accessibility-focused Voice Control dictation is than what’s generally available (see “How iOS and macOS Dictation Can Learn from Voice Control’s Dictation,” 31 August 2020).

With iOS 14, Apple has introduced another Accessibility feature that could be useful for everyone: Back Tap. With it, a double or triple tap on the back of a sufficiently recent iPhone can trigger any one of a variety of actions, including custom Shortcuts. Apple has essentially just given us two new customizable virtual buttons on the iPhone.

Unfortunately, Back Tap isn’t available in iPadOS 14, and even in iOS 14, its hardware requirements mean that you need an iPhone 8 or newer (I’ve seen slightly conflicting reports on what models are supported, but I can confirm that it’s not present on the iPhone 7).

Turning on Back Tap is easy. Navigate to Settings > Accessibility > Touch > Back Tap (it’s at the bottom of the Touch settings). Once there, you can set an action to be executed with a double tap or a triple tap. 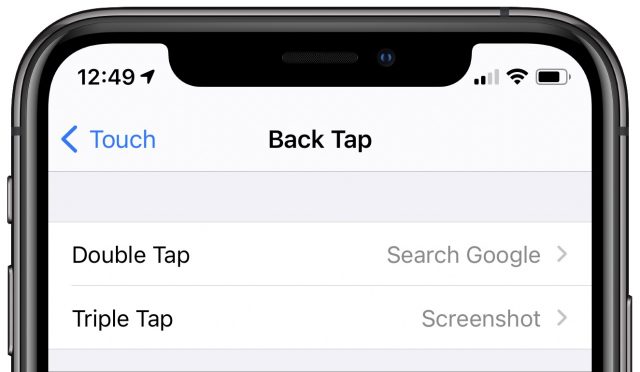 Back Tap actions fall into four basic categories: System, Accessibility, Scroll Gestures, and Shortcuts, all of which are shown below: 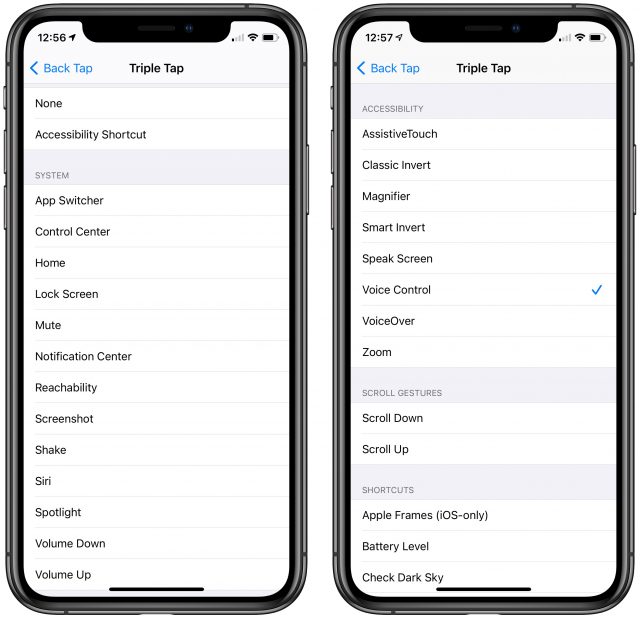 (As an aside, I’ve traditionally used the main Google app for searching since I like its combination of highly accurate voice search and a full page of results. In contrast, Siri’s recognition isn’t as good and provides just three responses, and the overly chatty Google Assistant app gives only one response and insists on speaking it to me, which I find intrusive. The problem with the Google app is that some Web pages, notably recipes, have so many ads they’re unreadable, so I prefer reading them in Safari. The downside of my new approach is that Google’s voice recognition is better than Siri’s; I see no way to access Google’s voice recognition but send the results to a browser that blocks ads. Suggestions welcome!)

That’s all there is to Back Tap, but even still, it’s a welcome feature that many people will never find deep in the Accessibility settings on their own. So spread the word—social discovery is all the rage these days—and let us know how you’re using it in the comments.