iOS 14.1 includes a new feature: support for 10-bit HDR video playback and editing in the Photos app for the iPhone 8 and later. That’s important because the upcoming iPhone 12 Pro models can capture HDR video.

After that, the rest of the changes detail bug fixes, including a particularly irritating problem with Home screen widgets in iOS 14 removing apps from folders. That’s a nice way of saying it—for TidBITS publisher Adam Engst, it blew away numerous folders, leaving five or six extra Home screens of loose apps for him to clean up (he ended up punting and hiding those Home screens—see our demo video and instructions in “iOS 14’s App Library: The FAQ,” 9 September 2020). Another widget-related fix solves an issue where some widgets, folders, and icons were shrunken on the Home screen.

Other changes fix bugs that:

The update also improves compatibility with Ubiquiti wireless access points and addresses one extremely specific bug that we’re betting almost no one other than the person reporting it has experienced: “Fixes an issue on some devices where selecting zoomed display mode and an alphanumeric passcode could result in the Lock Screen emergency call button overlapping with the text input box.”

You can download the update, which weighs in at 499.9 MB on an iPhone 11 Pro, in Settings > General > Software Update, through the Finder in macOS 10.15 Catalina, or using iTunes in earlier versions of macOS. 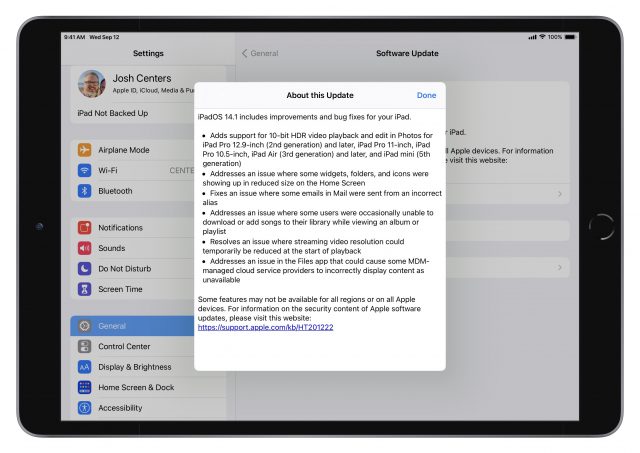 Otherwise, the iPadOS 14.1 update, which is 308.1 MB on a 10.5-inch iPad Pro, includes all the applicable fixes listed above for iOS 14.1. You can install the update in Settings > General > Software Update, through the Finder in macOS 10.15 Catalina, or using iTunes in earlier versions of macOS.

HomePod Software 14.1 is the first HomePod update of this release cycle. It adds support for the new HomePod mini and introduces the new Intercom feature for both the original HomePod and the HomePod mini. In our testing, the feature appears to work with the Siri invocation command “tell” or “intercom” The first one sends the message to all available HomePods, and the second lets you specify a particular HomePod.

In the press release for the HomePod mini, Apple says:

Intercom works with iPhone, iPad, Apple Watch, AirPods, and CarPlay, so everyone in the household can get Intercom notifications and send Intercom messages from the backyard or on their way home.

However, this doesn’t seem to be true yet. Whenever we tried to initiate an Intercom message from an iPhone running iOS 14.1, Siri informed us that it wasn’t possible. It turns out that widespread Intercom support is slated for the forthcoming iOS 14.2, which will come with on-screen controls as well. 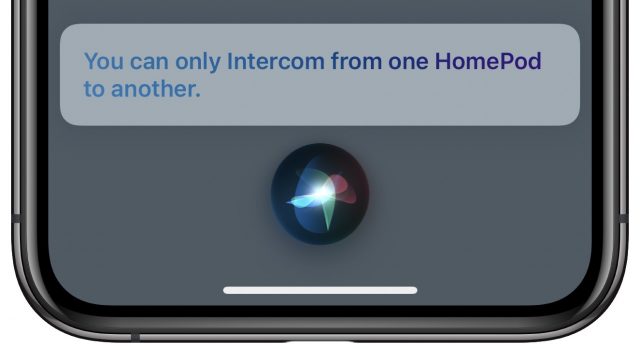 The HomePod Software 14.1 update improves Siri support for various lookups that should reduce the number of times Siri responds, “I can’t get that answer on HomePod.” Apple says that, when you ask the HomePod for directions, the results will appear as a suggestion the next time you open Maps in iOS 14, but this feature worked only sporadically in our testing.

More successfully, when we asked the HomePod to perform a Web search, it sent the results to the iPhone, displaying them exactly as if you’d initiated the query on the iPhone. Since more people will likely have multiple HomePods soon, Siri can stop alarms, timers, and media on any other HomePod in your home. Finally, Siri can now take podcast requests from multiple users in your home, so it can track subscriptions and playback locations for each individual.

In another improvement, you can finally assign a song, playlist, or radio station from Apple Music to a HomePod alarm. The update also fixes an issue that caused paired HomePods to play out of sync, improves reliability when using Siri to operate multiple speakers, and optimizes overall Siri performance.

The HomePod Software 14.1 update weighs in at 758.6 MB. To install it, open the Home app, and if an Update Available button appears, tap it. Otherwise, touch and hold the HomePod tile, tap the gear icon to enter settings, and then tap Install near the top of the screen. Left to its own devices (which is an amusing phrase in this context), the HomePod should update itself as well.

Apple says nothing about the tvOS 14.0.2 release apart from “general performance and stability improvements.”