In a move undoubtedly calculated to allow its engineers a chance to relax a bit during the holiday break, Apple pulled the lever on another all-OS release day. It brings the first update to macOS 11 Big Sur with new features and bug fixes, along with other feature-focused updates to iOS 14 and iPadOS 14, plus watchOS 7 and tvOS 14.

For the mobile devices, the updates add support for the new Apple Fitness+ service, among much else, while Big Sur gains support for the AirPods Max and the Apple ProRAW image format, plus smaller features and bug fixes.

It’s too early to have any sense of whether these updates are trustworthy or not. Unless you want to subscribe to Apple Fitness+ right away or are suffering from a bug that these updates address, our advice is to wait at least a week or so and see how the immediate adopters (like us) fare.

Apple Fitness+, which brings studio-style workouts to the iPhone, iPad, and Apple TV, is the star of these updates. It provides streamed video workouts that integrate with all of your Apple devices, tracking your fitness metrics and progress with your Apple Watch.

The Apple Fitness+ service, which can be shared by up to six family members through Family Sharing, costs $9.99 per month or $79.99 per year. All current owners of an Apple Watch Series 3 or later get a free month to try it out and, if you buy a new Apple Watch, Apple will give you three months for free.

Both trials convert to the $9.99 per month subscription automatically, so if you don’t wish to continue, or if you want to convert to an annual subscription, set yourself a reminder to do that before your trial ends. Apple timed the release well since lots of people will have extra time at home while cooped up over the holidays, and perhaps they’ll also be encouraged by new Apple gear.

In a notable reversal from last year’s cavalcade of bug fix updates to 10.15 Catalina, Apple’s first update to Big Sur is a feature release. (Amusingly, the link to its release on Apple’s Big Sur updates page currently ends with #macos1102 as the anchor name, suggesting that some parts of Apple may have expected a minor update.) 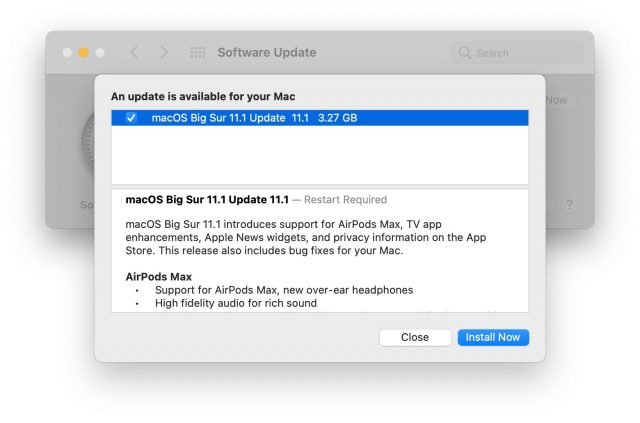 macOS 11.1 Big Sur does address a few bugs, but it also provides some new features, including:

When it comes to bug fixes, Apple listed only five, but a few are tremendously welcome. The problems they address include:

We’ve also heard speculation that Apple fixed a lot of bugs in the Rosetta 2 translation system. If that’s the case, those running M1-based Macs should consider upgrading sooner.

Apple advertises it as a 3.27 GB download for both Intel-based and M1-based Macs, but an M1-based MacBook Air downloaded 4.19 GB of data. 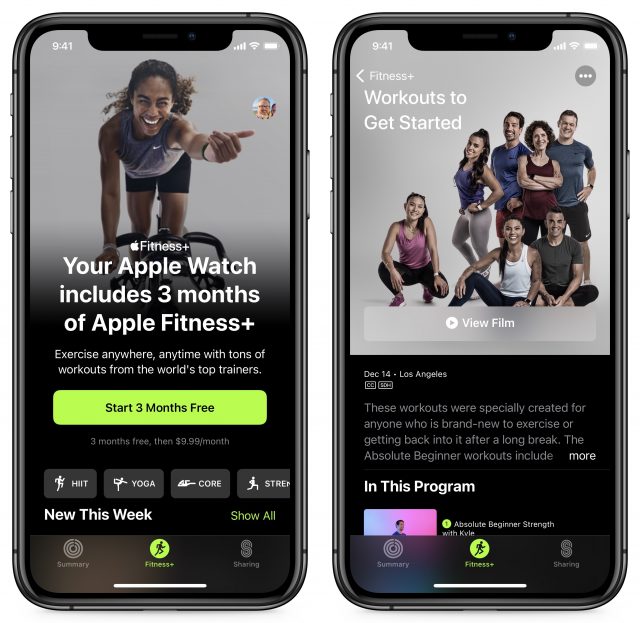 iOS 14.3 boasts some other interesting new features. You can now set Ecosia as Safari’s default search engine. Ecosia promises to keep your search data private from advertisers and vows to plant trees with your searches. We’re not exactly clear how that works, but it sounds positive.

Another change lets Shortcuts icons on the Home screen launch directly, without first opening the Shortcuts app. iOS 14 lets you create a shortcut to an app with your own custom icon, which led to a rush of people customizing their Home screens. Until now, icon customization meant a longer, more awkward process to open apps. The downside is that each launch of the shortcut displays a confirmation banner, which gets old fast.

iOS 14.3 brings some exciting features for photographers. The iPhone 12 Pro and iPhone 12 Pro Max can now capture photos in the Apple ProRAW format. ProRAW photos let professional photographers shoot in raw format (which provides the most flexibility for later editing) without losing the advantages of the iPhone’s multi-frame computational photography. PetaPixel has a nice overview and a review with lots of side-by-side examples—ProRAW is apparently the most useful when using Night Mode. To shoot in ProRAW format, you have to enable it in Settings > Camera and then turn it on in the Camera app.

iOS 14.3 adds support for App Clip Codes. App Clips are small applets that let you try an app without installing the entire thing. You can find them on Web pages or access them from QR codes. App Clip Codes are special Apple-designed NFC-embedded tags you can scan to try App Clips in the physical world. You can try App Clips by visiting the Chibi Studio Web page in Safari running in iOS or iPadOS.

Other iOS 14.3 features include:

Unsurprisingly, the changes in watchOS 7.2 are devoted almost entirely to Apple Fitness+. Somewhat confusingly, although Apple renamed the Activity app on the iPhone to Fitness, watchOS 7.2 retains the Activity name for the app, watch face, and complications. 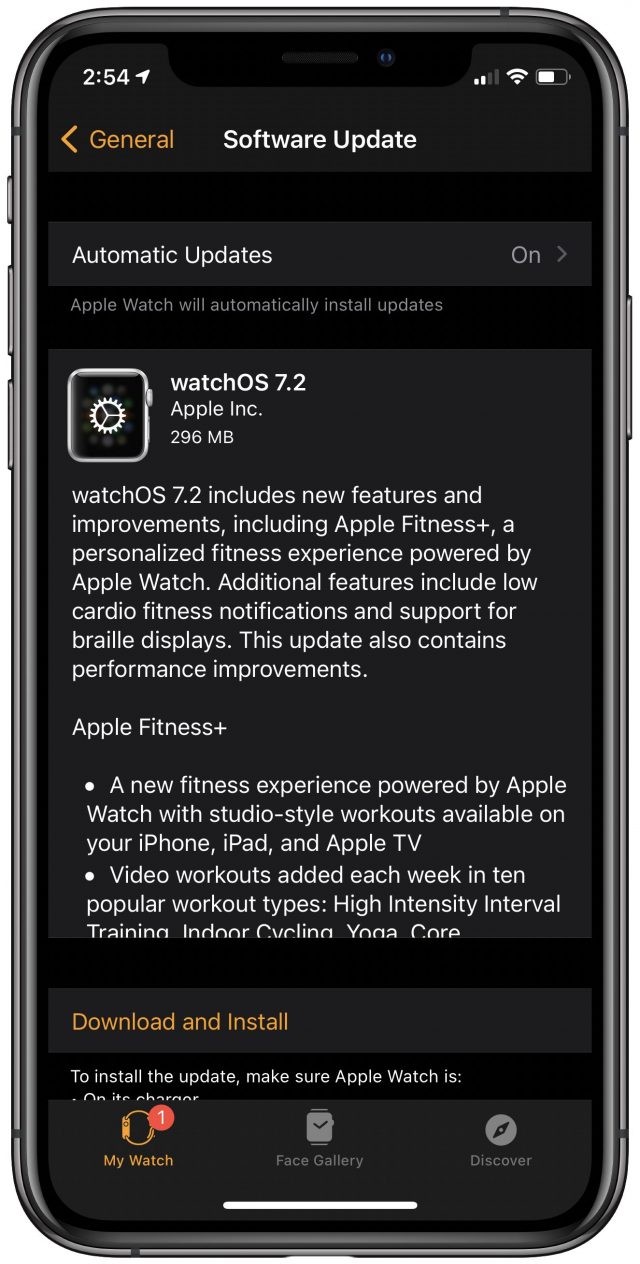 Other features and improvements in watchOS 7.2 include:

watchOS 7.2 addresses eight security vulnerabilities, nearly all of which are in the core code shared among Apple’s operating systems.

It’s a 296 MB download for an Apple Watch Series 5. To install the watchOS 7.2 update, open the Watch app on your iPhone and go to My Watch > General > Software Update. Remember that the watch must be on its charger and charged to at least 50%.

In a change of pace, the tvOS 14.3 update for the Apple TV HD and Apple TV 4K delivers more than the usual unspecified bug fixes, providing two notable changes:

In addition to these new features, tvOS 14.3 includes fixes for seven security vulnerabilities.

To install the tvOS 14.3 update, go to Settings > System > Software Update, or just let it install on its own.