The displays on Apple laptops are lovely, but as with all laptops, limiting. Users have less on-screen room to work than, say, iMac users who benefit from vastly more screen real estate to spread out their apps and documents.

Solutions do exist. When working at a table or desk, MacBook users can connect one or more external displays to create multi-screen workstations. And when on the move, they can harness an iPad as a second display (see “Catalina’s Sidecar Turns an iPad into a Second Mac Monitor,” 21 October 2019).

A Texas company called Xebec has taken a different, novel approach. Its Tri-Screen accessory hangs on the back of a MacBook screen and provides a pair of 10.1-inch displays that slide out on either side. The end result is a compact multi-screen workstation with the laptop’s primary screen in the center, and Xebec’s secondary displays on the left and right. The Tri-Screen also works with a variety of PC laptops. It lists for $449.99 but is currently available on a holiday sale for $399.99.

The Tri-Screen is a promising idea. The implementation needs work.

I have been testing the Tri-Screen for a while and liking the enhanced productivity that such a multi-screen setup affords. But the hardware is quirky in ways that have caused me frustration.

Xebec isn’t the only manufacturer to try this trick. A California company called Mobile Pixels has taken a similar tack with its Trio gear. I won’t spend much time on the Trio since Mobile Pixels didn’t respond to my requests for loaner hardware, but I’ll have a few thoughts later on how the Trio compares to the Tri-Screen.

The Tri-Screen is an ingenious bit of mechanical engineering. Its rectangular chassis consists of two interlocking plastic pieces for adjustable width—and an internal elastic band to create tension.

The chassis fits onto the rear of the MacBook’s open screen, and it is thin enough to not seem absurd hanging that way. The elastic band keeps the apparatus clamped onto the laptop lid’s edges. 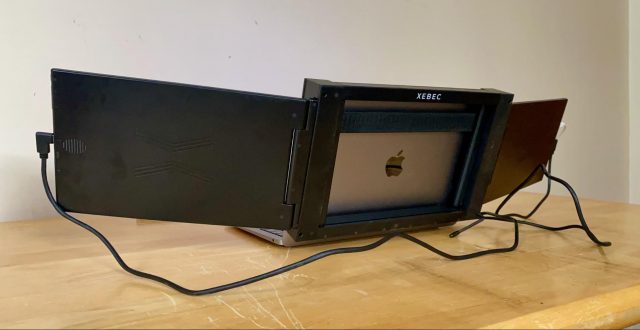 The Tri-Screen’s displays, already partially protruding on either side, slide all the way out and have hinges so they can be angled toward the user.

Each screen’s outer edge incorporates one Mini HDMI port and two USB-C ports, which are for the necessary cables that connect to the laptop.

Xebec includes two USB-C to USB-C cables, two USB-C to USB-A cables, and two Mini HDMI to HDMI cables. These give the Tri-Screen compatibility with most Apple notebooks going back a half-decade (with, in some cases, a Mini DisplayPort-to-HDMI adapter needed to complete the setup).

Setting up the Tri-Screen is straightforward, especially if you have a laptop with two or more USB-C ports. My MacBook Air has two USB-C ports on the left side, so the cable coming out of the right-hand Tri-Screen display has to snake around the back of the laptop to reach a port.

The screens then activate as expected but may need adjustment. In my case, the image on one screen was upside down, requiring a visit to System Preferences > Displays. Also, one of the displays was blank because I had connected the cable to the wrong USB-C port; one of these ports on each screen is for video, the other for power. My MacBook Air’s charging cord plugs into one of those power ports.

In addition, my screens were too dim. System Preferences was no help here. I had to fiddle with the display’s generic on-screen controls via awkward mechanical buttons. Even after I maxed out the brightness on both displays, one remained a bit dimmer than the other.

At this point, I was ready to get some work done, but I needed to temper my expectations. Like an iPad used as a Mac display via Sidecar, the Tri-Screen displays are smaller than the MacBook Air’s display, so they’re best used for secondary items like video-editor toolbars or social-media windows. Something more intricate—like a Numbers spreadsheet or Pages document—can be difficult to make out on the 1920-by-1200 displays. I got a Gmail window to work after zooming way in so I could comfortably read it, but doing so limited the amount of information I could have on the screen.

You can, by the way, use just one Tri-Screen screen if that is all you need, and keep the other tucked away.

Regardless, the Tri-Screen’s benefits are obvious. More screens means more room to spread out, with fewer windows stacked atop each other. I felt myself working more efficiently and becoming more productive—that is, when I was not dealing with the Tri-Screen’s annoyances.

The Tri-Screen is far from a perfect product, and you should carefully consider its shortcomings before deciding whether to invest in one.

You can avoid all of these problems by keeping the laptop in one place, plugged into power, and with Energy Saver set to never sleep. But that, obviously, defeats the entire purpose of having a mobile Mac.

Generally speaking, the Tri-Screen is a quirky accessory that is bound to cause aggravation, as Xebec appears to acknowledge with a detailed troubleshooting page along with an offer to schedule help calls. That’s great customer service, but seeing the company go to such lengths doesn’t inspire confidence in the product.

As I noted, Xebec has competition in Mobile Pixel’s Trio product, which sets up in much the same manner. I wasn’t able to test it alongside the Tri-Screen, but a look at the company’s Web site yields useful bits of information.

The Trio is modular with two standalone screens that are blended to constitute a three-screen workstation. If one extra screen is all you need, just buy a single Trio. The modularity also means you could easily repurpose a Trio for another use, like playing games with a Nintendo Switch.

But getting the two screens onto a laptop’s lid—a process that involves metal plates, magnets and other doodads—looks like a chore.

I remain intrigued by the idea of attached auxiliary laptop displays to ramp up productivity, but the Tri-Screen is too much of a hassle in its current form, particularly given its price. A regular monitor isn’t comparable, of course, but $400 will get you a decent 4K monitor.

I don’t want to have to adjust the displays before getting to work every day. Nor did I enjoy continually struggling to keep my screen at the desired angle while worrying about the Tri-Screen becoming dislodged. And, as an OCD sufferer, all that cable clutter is distracting.

I wonder if Xebec should consider a two-display apparatus that wraps around a notebook but doesn’t hang off the screen. A number of single displays are available for this purpose, but what I have in mind is a multi-display accessory that stands on its own, positioned behind and around a laptop, and folds up like a portfolio when not in use.

After experimenting with the Tri-Screen, I’m going back to my iPad and the Sidecar feature when I need a secondary MacBook display. It’s less messy and doesn’t require a lot of fiddling to get working. You can even attach your iPad to the left or right edge of a MacBook’s display using a Mountie accessory that my TidBITS colleague Jeff Porten found “transformative” (see “Attach an iPad to Your MacBook as a Second Display with Mountie,” 22 February 2019).