Wireless phone charging can be a straightforward proposition: Buy a simple, decent-quality Qi pad for about $30, plug it in, place your iPhone on the charging surface, and wait for the battery to top up.

The annoying thing about Qi charging pads is that you must place your iPhone on them just so, or it won’t charge. Precise placement aligns the metal charging coils inside the iPhone with the corresponding coils in the Qi charger.

Apple planned to liberate us from this first-world torment with AirPower, a wireless charging pad that would have accommodated multiple Apple devices at the same time. AirPower never saw the light of day, reportedly because of serious heating issues (see “Apple Cancels AirPower, Can’t Take the Heat,” 29 March 2019), but the AirPower idea hasn’t died. As Apple has pivoted to MagSafe for ensuring proper positioning, others have introduced AirPower-style products.

I have been testing one such accessory, Nomad’s Base Station Pro, an attractive and ruggedly built multi-device charging pad that doesn’t replicate all of AirPower’s advertised features but is a nifty feat of engineering all the same. Notably, the Base Station Pro does not require precise alignment of iPhones. 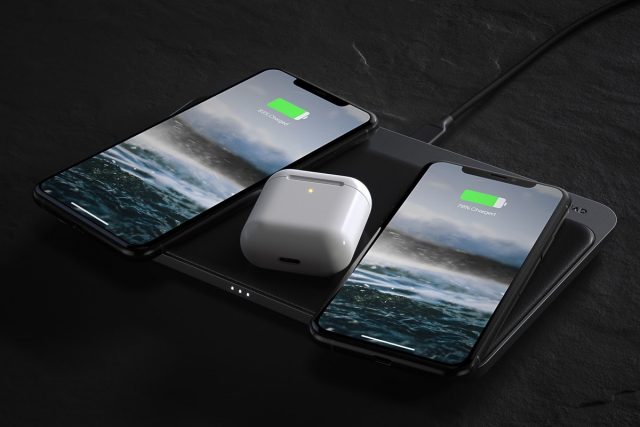 The Base Station Pro is as much tech proof-of-concept as a shipping product. It’s intended to showcase Aira FreePower, a free-placement charging technology that aspires to be AirPower’s heir—and then some. Aira’s creators aim to put charging surfaces everywhere: built into furniture, integrated into vehicle cabins, fused onto coffee shop counters, and so on.

That’s cool, but potential Base Station Pro buyers have a more immediate dilemma: Is it worth $199.99 when you could pick up a trio of Qi pads for a lot less?

The Base Station Pro is costly in part because of fancy physical construction. Rather than utilitarian plastic or rubber, it offers a leather-sheathed charging pad on a sturdy aluminum base that’s only a half-inch thick. It’s similar to older Base Station pads, but the Aira tech jacks up the price even more.

The Base Station Pro has one obvious shortcoming: Aira charging does not support the Apple Watch. Nomad works around this by providing a free clip-on aluminum mount for the watch puck—but you have to add your own power adapter separate from the Base Station Pro’s 30-watt USB-C adapter. It’s a kludgy hack that creates cable clutter but doesn’t look terrible. 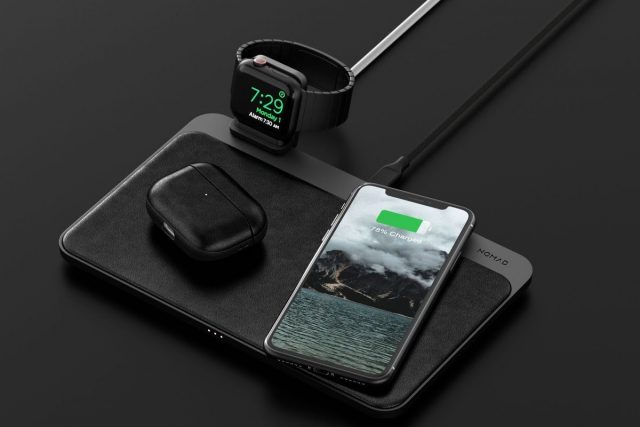 As promised, the Base Station Pro permits flexibility in the placement of iPhones and AirPods cases. Devices can be askew instead of painstakingly aligned, but they each need to occupy about a third of the surface, as shown below.

The Aira tech claims edge-to-edge charging via an internal board incorporating 18 overlapping hexagonal charging coils—but I found my AirPods case would sometimes fail to charge if it was too close to one of the Base Station Pro’s edges.

Don’t bother trying to add a fourth device. I tried charging two iPhones, one at each end, plus two AirPods cases in the middle. That is a no-go; a trio (not a quartet) of charging lights on the charger’s front edge was a tip-off that I had overreached—only one of my AirPods cases would charge in this scenario.

If you’re charging just two devices, the Aira tech is even more forgiving about the positioning. You can put two iPhones (or an iPhone and AirPods Pro case) on the pad just about anywhere, at almost any angle.

The Base Station Pro charges at 7.5 watts, the maximum iPhones support with standard Qi accessories. By comparison, the iPhone 12 models charge at 15 watts when using Apple’s MagSafe, except for the iPhone 12 mini, which charges at 12 watts.

You may run into a few issues when using the Base Station Pro, Nomad warns:

Another issue became apparent when Apple released the iPhone 12. The MagSafe magnets interfered with Aira charging, so they charged more slowly and less reliably than older models—if at all.

Nomad has its own potential solution. You can update the Base Station Pro’s firmware by connecting it to a Mac and running an updater app. Nomad said a recent update “made some marked improvements to the experience. The experience is a lot better today than it was when the iPhone 12 first launched.”

I can attest to that. I found charging to be unreliable when I started testing the Base Station Pro, but performance has been far more consistent lately. It has been my primary charger for the past two weeks with no major issues. Nomad says it has another software update coming soon that will make additional improvements to the charging experience.

So should iPhone users seriously consider dropping $200 on the Base Station Pro? The answer may not be simple. Weigh the following factors:

Other multi-device wireless chargers exist, often for quite a bit less money. But study them carefully before buying. A fancy but flawed one that crossed my desk is Belkin’s $129.99 TrueFreedom Pro, a pleasingly hefty, leather-topped Qi pad. It matches the Base Station Pro in permitting flexible positioning thanks to an internal mesh of overlapping coils. But the TrueFreedom Pro charges only two devices at once and does not accommodate the Apple Watch in any way.

The TrueFreedom Pro also suffers from issues with the iPhone 12. On its product page, Belkin describes it as “not compatible with iPhone 12 models.” I was able to charge my iPhone 12 devices, but Belkin told me it might be slower and less reliable than with other smartphones. Unlike the Base Station Pro, the TrueFreedom Pro lacks firmware updating, meaning any iPhone 12 incompatibilities are baked in.

Though I loved using the Base Station Pro and look forward to seeing it improve via firmware updates, it’s a tough sell given simpler, less expensive options. Standard Qi chargers don’t look fancy and are not always the fastest around, but they charge my iPhone overnight just fine. If I need speedier charging, I plug in a Lightning cable. Granted, fiddling with an iPhone’s position on a standard Qi pad until the charging kicks in can be annoying. But with a bit of practice, it becomes automatic.

So is the flexible positioning on the Nomad Base Station Pro a reason to pay more? Sure, if you can afford it, it’s a snazzy accessory. But for those on tighter budgets, save your money.