In what may be the final feature releases of Apple’s non-Mac operating systems before the end of the year, the company today rolled out iOS 14.2, iPadOS 14.2, watchOS 7.1, HomePod Software 14.2, and tvOS 14.2. Although none of the new features are ground-breaking, many fill in small integration gaps in the overall Apple ecosystem.

Although we generally encourage caution when it comes to installing updates, you should plan to install the iOS, iPadOS, and watchOS updates soon because they address three serious security vulnerabilities that are being exploited in the wild. The HomePod Software and tvOS updates will install on their own in a bit; the only reason to install them manually is if you want their new features right away.

With a release just ahead of the new iPhone 12 mini and iPhone 12 Pro Max, along with the HomePod mini, all of which became available to order on 6 November 2020, the new iOS 14.2 is packed with updated features. Most notable among them is the promised support for Intercom for the iPhone, iPad, Apple Watch, and CarPlay—at its launch in HomePod Software 14.1, Intercom worked only with HomePods (see “Apple Releases iOS 14.1, iPadOS 14.1, HomePod Software 14.1, and tvOS 14.0.2,” 20 October 2020). 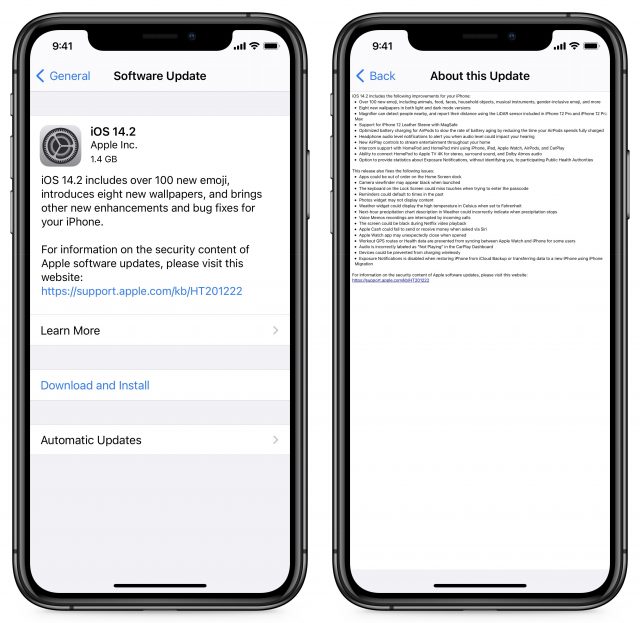 To use Intercom on an iPhone, you must first enable it in the Home app. The Home app will prompt you to set it up when you next launch it (the first three screenshots below), so you can learn the necessary Siri command and set when Intercom notifications are delivered to the device you’re using. You can also adjust this setting (and avoid using certain HomePods) by tapping the Home icon in the upper-left corner, choosing Home Settings from the menu, and then tapping Intercom (the rightmost screenshot below).

Once everything is set up, you can ask Siri to “tell” or “Intercom” along with your message. If you give Siri a destination HomePod or other device, only that device will get the message; otherwise, it will be broadcast to all devices in the “home.” You can also tap the new Announce icon in the upper-right corner of the Home app. You’ll be prompted to record your message. Tap Done when you’re finished. 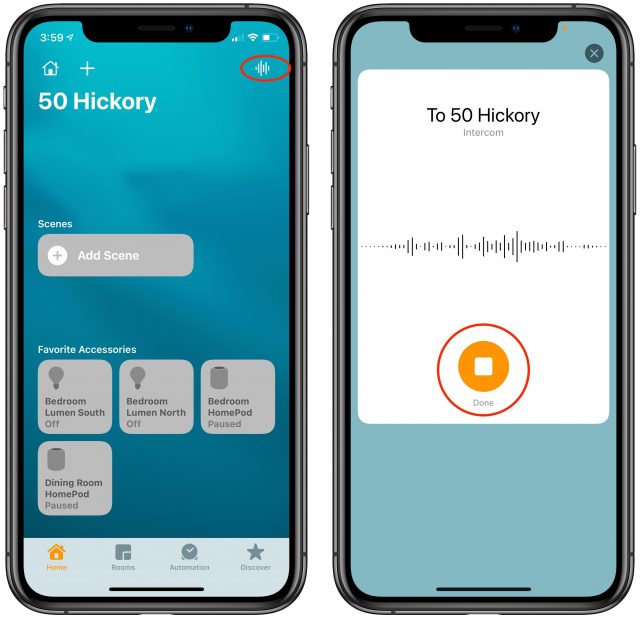 Other features in iOS 14.2 include:

The iOS 14.2 update also fixes a number of issues that could:

The iOS 14.2 and iPadOS 14.2 updates share 24 CVE entries detailing security fixes, three of which are being exploited in the wild.

You can download the iOS update, which weighs in at 1.4 GB on an iPhone 11 Pro, in Settings > General > Software Update, through the Finder in macOS 10.15 Catalina, or using iTunes in earlier versions of macOS.

As usual, iPadOS 14.2 gets a subset of the changes in iOS 14.2, except for two camera-related improvements aimed solely at the recently released fourth-generation iPad Air. 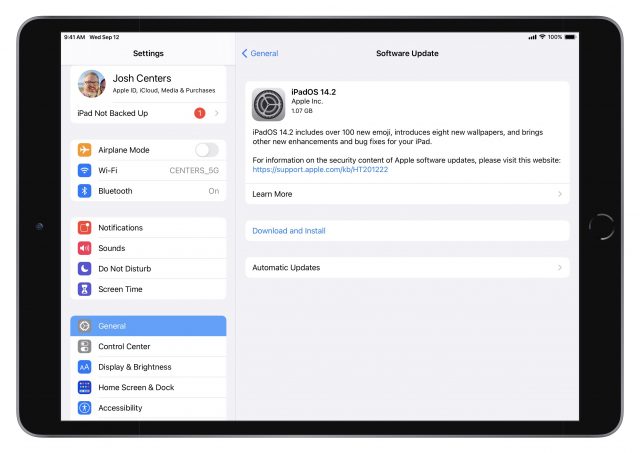 These improvements fall squarely into the “Huh, that’s nice” category, although we suspect it will be impossible to know when they’re in play—photos and videos should just be a little better.

Although the change list for watchOS 7.1 is short, there are a couple of bug fixes that may be particularly welcome. In terms of features, there’s only one that’s available to everyone: the option to be notified when your headphone audio could impact your hearing. Sadly, it’s not your mother yelling at you to “Turn that music down!” Plus, Apple Watch users in the Republic of Korea and Russia gain support for the ECG app and irregular heart rhythm notifications. 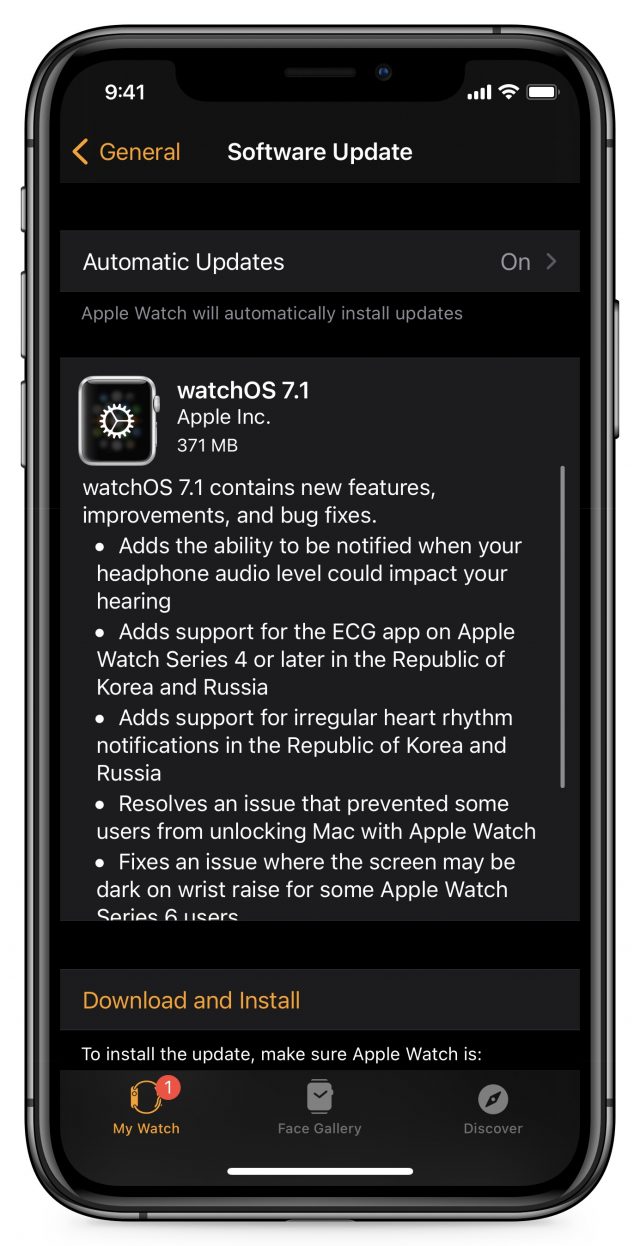 More interesting are the two bugs that Apple says it fixed. One resolves an issue that prevented some users from unlocking a Mac using the Apple Watch, something that’s particularly frustrating once you’ve become used to your Mac unlocking automatically. The other addresses a problem that made the screen dark on a wrist raise for some Apple Watch Series 6 users.

watchOS 7.1 is a 371 MB download for an Apple Watch Series 4. To install the watchOS 7.1 update, open the Watch app on your iPhone and go to My Watch > General > Software Update. Remember that the watch must be on its charger and charged to at least 50%

For those for whom an Apple TV 4K is a significant part of your home theater system, the HomePod home theater support will let you connect one or two HomePods to the Apple TV 4K to get stereo, surround sound, and Dolby Atmos audio. All you’ll have to do is put your updated HomePod (or a HomePod stereo pair) in the same HomeKit room as your Apple TV using the Home app in iOS 14.2 or iPadOS 14.2. (The feature doesn’t support the Apple TV HD or other AirPlay-2 enabled speakers.) 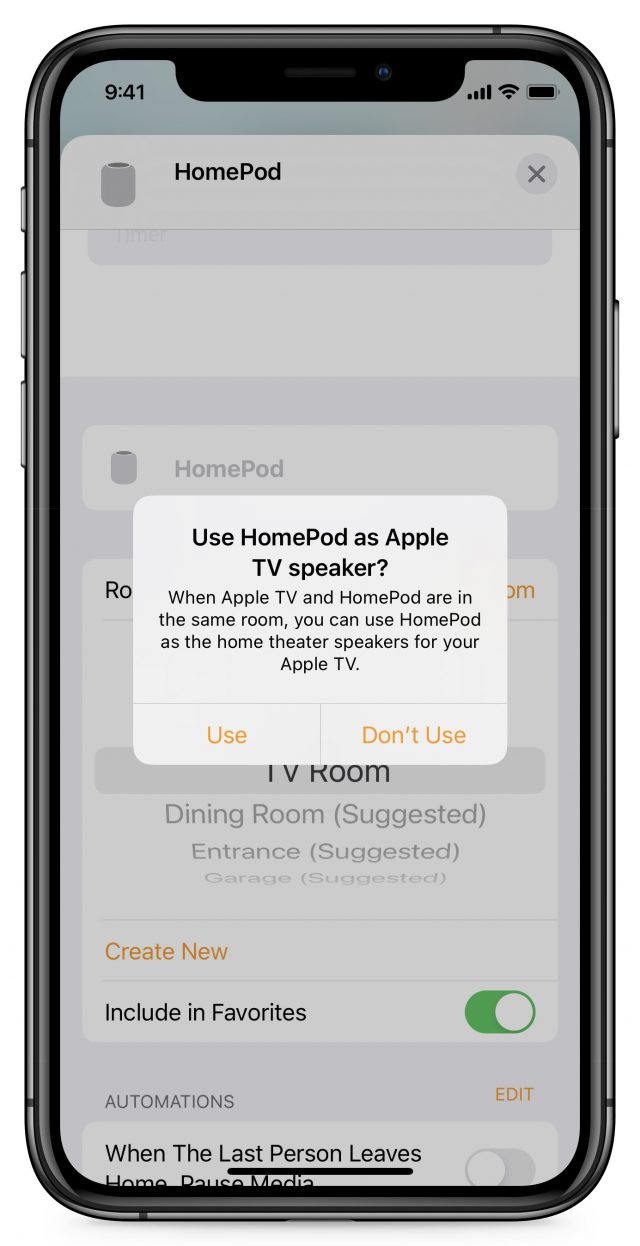 To do that, open the Home app, enter settings for both the Apple TV 4K and the HomePod and make sure the room settings are identical. Otherwise, it won’t work correctly, even if they’re in the same physical room. The second we added the HomePod to the same HomeKit room as the Apple TV 4K, we were asked if we wanted to use the HomePod as the default audio output. You can change this later on the Apple TV in Settings > Video and Audio > Default Audio Output.

It also appears that both the Apple TV and HomePod must be in the same HomeKit room for Dolby Atmos to work. In our testing, there was a notable improvement in audio quality once we did so.

To install the tvOS 14.2 update, go to Settings > System > Software Update, or just let it install on its own if you’re not interested in HomePod home theater or Apple One.