Back in 2019, Apple made it so that you could pay month-to-month for to extend AppleCare+ coverage indefinitely for the iPhone, iPad, and Apple Watch (see “Is Your AppleCare+ Expiring? You Can Now Renew It,” 19 September 2019). Apple is now offering that extended coverage to Mac owners in the United States.

If you have an active AppleCare+ plan for a Mac, you can go to mysupport.apple.com within 30 days of the coverage end date and follow the on-screen instructions to extend your coverage. It will automatically renew every month until canceled. In general, we recommend AppleCare+ for laptop Macs but not for desktop models, which are much less likely to suffer accidental damage.

Unsure when your AppleCare+ coverage ends? Log in to mysupport.apple.com and select your device to check the expiration date.

Keen-eyed observers have also noticed that you can now buy AppleCare+ when buying a new Apple TV, including the Apple TV HD. It costs $29 for 3 years of accidental damage coverage. However, unless you anticipate small children hammering on your Apple TV, I don’t recommend it. There just isn’t much to break on the main Apple TV unit. Similarly, the new Siri Remote should be more durable than the previous model, and that one didn’t seem to break all that often. You’re more likely to lose an Apple remote than break it, and a new Siri Remote costs only $30 more than AppleCare+. Save your money. 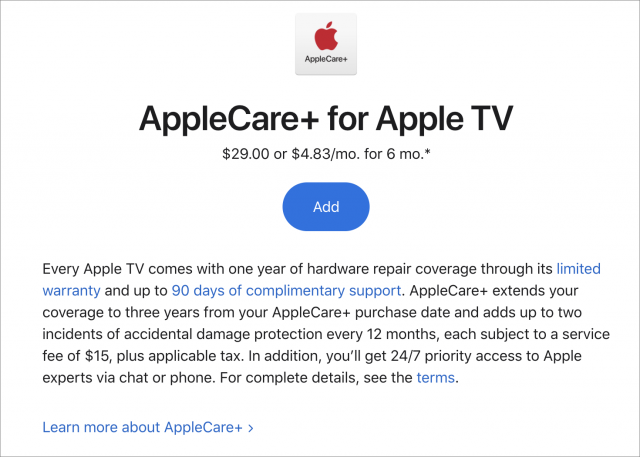