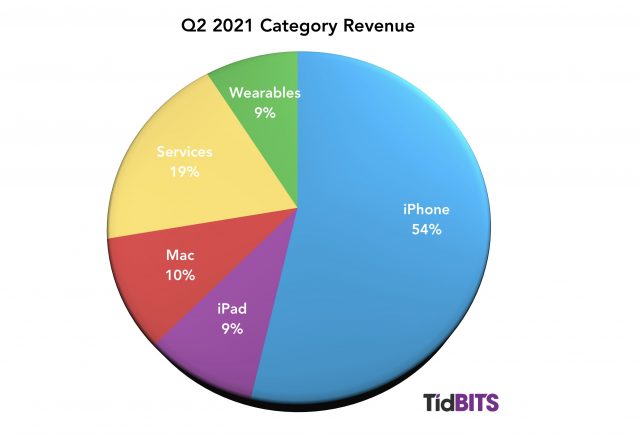 As has been the case for some time, iPhone revenues constituted more than half of Apple’s income for the quarter, but while the slice of the pie for each of the other categories was smaller than the iPhone’s, the pie itself turned out to be much larger than in past March quarters. For example, while Mac sales accounted for only about 10% of quarterly revenues this year compared to 9% last year, this year’s slice of the pie amounted to over $9 billion in income, besting last year’s Mac revenues by nearly $4 billion. 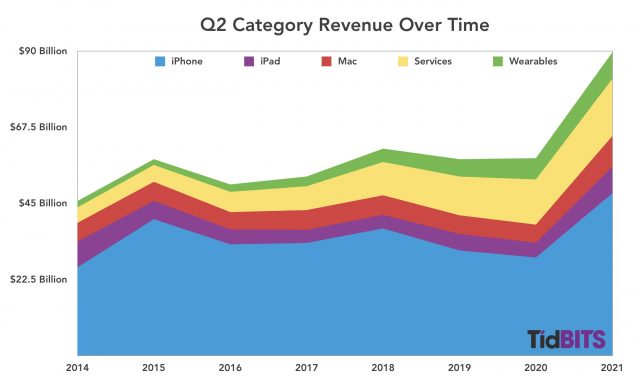 Hold onto your hat: the iPhone results are wild. iPhone sales increased 65.5% year over year. Yes, you saw that right. Apple raked in $47.9 billion in iPhone sales in Q2 2021, compared to $29 billion in the year-ago quarter. Cook credited the iPhone’s success to the “strong popularity of the iPhone 12 family.” To be fair, the delayed release of the iPhone 12 models also pushed a lot of its sales into this quarter’s results instead of them being realized in the previous quarter, which has been the pattern in prior years. 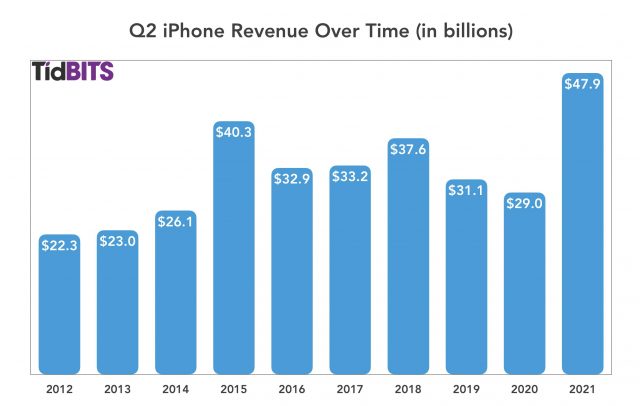 iPad quarterly sales increases year-over-year were even more astronomical: sales were up 78.7%. Although Apple sold “only” $4.4 billion of iPads in Q2 2020, the product line brought in $7.8 billion in Q2 2021. While this is not quite an all-time quarterly sales record for the tablet, the results were second only to Q2 2013, in which iPad sales hit $8.7 billion. As it was, iPad sales records still were smashed regionally: for example, Apple broke its all-time iPad revenue in Japan. Cook credited the iPad’s explosive growth to waves of people now working and learning from home. 50% of new iPad buyers in Q2 had never owned one before. 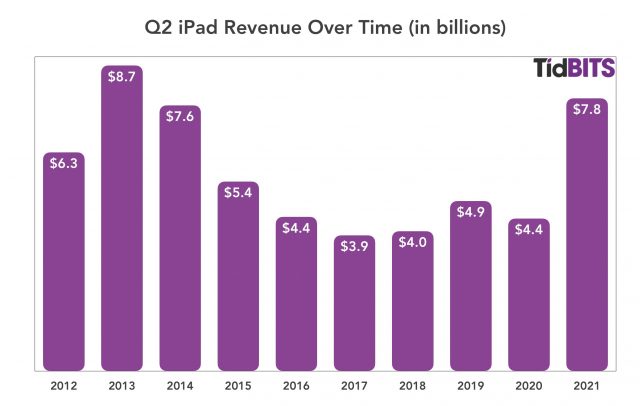 The Mac had its biggest Q2 by far since we started tracking it in 2012. It brought in $9.1 billion of revenue, a year-over-year increase of 70.1%, compared to $5.4 billion in Q2 2020. CFO Luca Maestri said that the past three quarters have been the best ever for the Mac. Cook credited the Mac’s current popularity not only to the many people working and learning from home during the pandemic, but also to the introduction of Apple’s M1 chip, which is replacing Intel’s chips in the Mac line. Like the iPad, half of all Mac buyers in Q2 were first-time buyers. The Mac set new all-time revenue records in Europe and Asia Pacific in Q2. 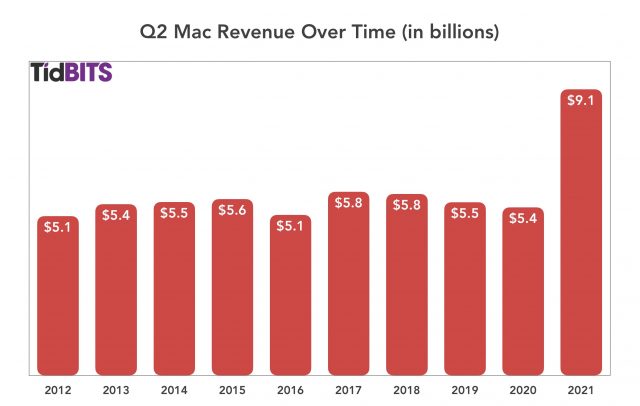 The Services category continues to grow, with a 26.6% year-over-year revenue increase, which seems small only compared to the astonishing iPhone, Mac, and iPad revenue increases. Services brought in $16.9 billion in Q2 2020, up from $13.3 billion in Q2 2021. Maestri said that Apple’s services now have 660 million subscribers. He added that all the drivers for Apple services are moving in the “right directions,” such as a large and growing customer base. Tim Cook also took a few opportunities to brag about the awards and nominations netted by Apple TV+ content, a small contributor to revenues but a substantial contributor to mindshare: he noted that the content service has garnered 352 award nominations and 92 wins. 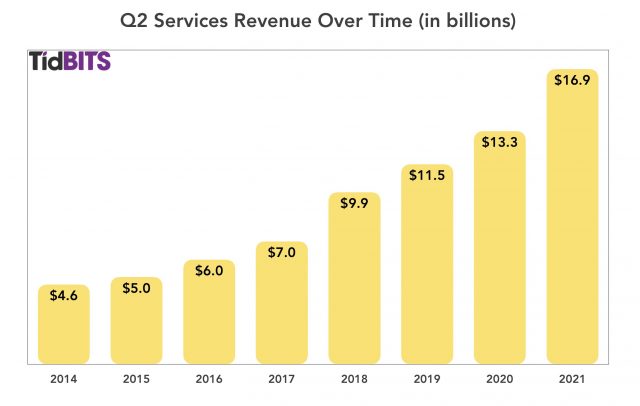 Wearables was the weakest category this quarter, increasing by “only” 24.7%. It brought in $7.8 billion during the quarter, up from $6.3 billion in the year-ago quarter. Cook said that 75% of Apple Watch sales in Q2 were to new Apple Watch owners. Although the closure of many Apple stores during the pandemic and the reduced services offered by others during this time may have adversely affected sales of some wearables, the online sales of wearables took up more of the slack than had been expected. 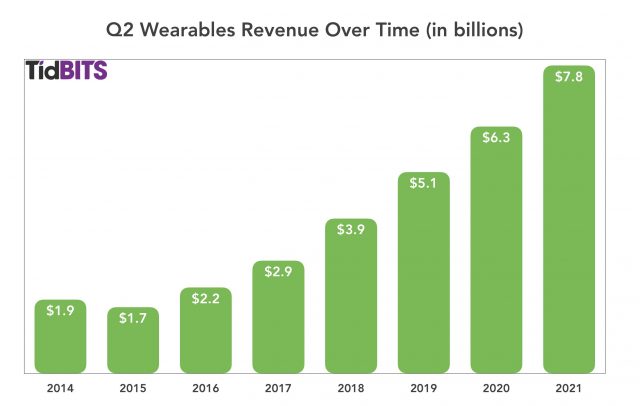 Apple performed well in all of its geographic sales regions, with revenues in every region increasing by at least 30%. Mac sales broke records in Europe and Asia Pacific, and iPad broke all-time sales records in Japan. In Greater China, where Apple sells a lot of goods, revenues increased from $9.5 billion in the year-ago quarter to $17.7 billion this quarter. Whether at home or abroad, Apple is doing very, very well right now. 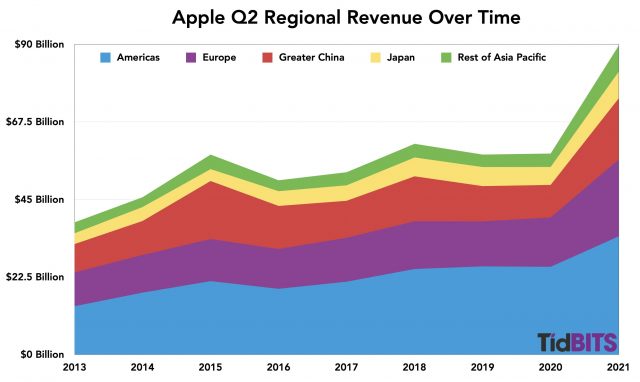 Where does Apple go from here? For one, don’t expect Q2 results next year to be as impressive as this year’s Q2. Last year, the March quarter was especially challenging, between the COVID-19 pandemic, its concomitant lockdowns, and supply chain issues. Apple had a lot of room to grow.

That said, Apple is on perhaps the firmest footing it has ever been on. The iPhone, iPad, and Mac are more popular than ever. The risky switch from Intel processors to Apple’s own M1 chip in the Mac has been nothing short of a smashing success, both critically and commercially. And Apple’s Services business seems to have unlimited room for growth. So, while Apple may not exceed these results next quarter—Cook noted that Apple would be “supply-gated, not demand-gated” in the coming quarter, having burned through much of its material reserves to counter supply constraints in Q2—the demand for Apple goods and services seems only to be accelerating, a prospect even sweeter than one of Ted Lasso’s famous biscuits.

Comments About Apple’s Jaw-Dropping Q2 2021 by the Numbers