Among my many husbandly roles is Finder of Things.

My wife often misplaces her keys, so I recently attached an AirTag to her keyring (see “Apple’s AirTag Promises to Help You Find Your Keys,” 20 April 2021). Now, whenever she misplaces it, she yells for me to tap Find My on my iPhone so that the AirTag beeps. (She would do it herself, but she is enamored of her ancient iPhone 5s due to its small size and hasn’t upgraded to an AirTag-compatible model yet.)

The other thing she continually misplaces is our Apple TV’s first-generation Siri Remote. And no wonder—the slippery glass wafer has a way of vanishing between the couch cushions, finding its way beneath the living room furniture, disappearing amid clutter on side tables, or being absentmindedly left in another room.

When Apple announced its second-generation Siri Remote in April (see “Apple Updates Apple TV 4K; Introduces New Siri Remote,” 20 April 2021), alongside the AirTag, my jaw was among many that dropped in disbelief that the remote didn’t incorporate Apple’s Find My tracking technology via its ultra-wideband chip.

After all, even Apple acknowledged that TV users lose track of their remotes. In an AirTag promo video shown during the company’s April press event, an actor is seen wandering within his couch, à la Alice in Wonderland, amid tech clutter that includes an iPod, a CD-ROM, and, yep, a TV remote. 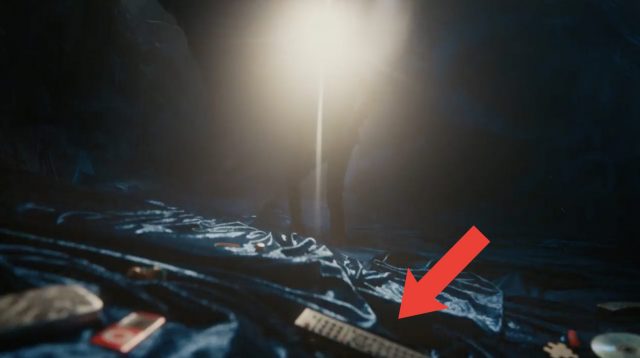 Yet, Apple offers no solution—the guy in the video is looking for his AirTag-equipped keys, not his remote.

So what am I to do, in my role as Finder of Things? I could continue helping my wife ransack the house for her Siri Remote whenever it goes missing—she has lately been using the second-generation model—but how about a Siri Remote sleeve that also accommodates an AirTag?

This idea popped up seemingly within nanoseconds of AirTag and the second-generation Siri Remote being announced. 3D-printed or otherwise DIY-ed AirTag remotes soon appeared on Etsy, Thingiverse, and other places.

Both sleeves work in the same way: you first insert an AirTag into a snug circular compartment at the bottom and then slide the Siri Remote into the sleeve over the tag so they’re held tightly together.

This approach makes the remote thicker, but not enough to hamper usability. My thumb still easily reached most of the buttons. The Siri button on the right edge is the only one covered by the sleeve, using either case, but you can easily press it through the sleeve.

The differences between the sleeves are mostly cosmetic but do affect usability in minor ways.

Elago’s $15.99 2021 Apple TV Siri Remote R5 Case is understated, with a smooth, curved bottom that offers no hint of the AirTag nestled within. Because of this, it feels very comfortable in the hand—much more so, in fact, than the sharp edges of the bare Siri Remote. 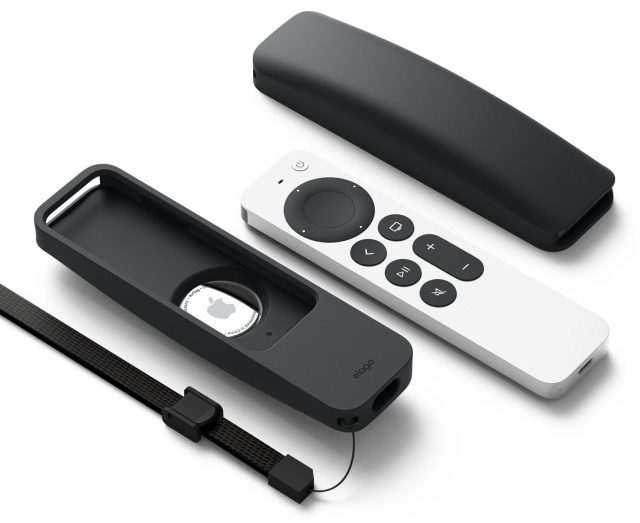 The R5 Case includes a wrist strap. It is available in four colors—beige, black, blue, and white. The white version glows in the dark, which is why it’s called “Nightglow Blue.”

In contrast, Abby’s $24.50 Anti-Lost Case for AirTag, Siri Apple TV 4K HD Remote Control (2nd Gen – 2021) has a more elaborate design with a textured surface and an aggressively angled bottom that gives it a militaristic vibe. It also does a nice job of cushioning the remote’s sharp edges.

A circular cutout on the bottom reveals the presence of the AirTag for no practical reason that I can see. The protruding AirTag introduces another tactile element that makes the sleeve feel weird in the hand—whether that’s bad-weird or good-weird is a matter of taste, and in my case, it’s a bit much. 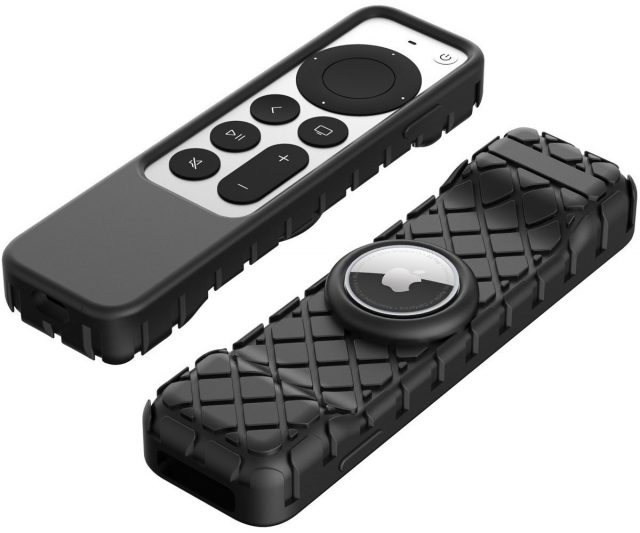 The case is available in black, blue, green, orange, pink, and yellow. It has no wrist strap.

Abby’s Siri Remote sleeve is one of several AirTag products in its portfolio. Other accessories include a keychain holder and a dog-collar pouch along with a wallet and an AirPods Pro case cover that incorporates an AirTag compartment.

I’d like to say that one of these sleeves solved my wife’s Apple TV woes, but that remains a bit unclear as I write this. She’s vacillating between the first-generation and second-generation Siri Remote and seems to be leaning towards the older device.

If she ends up sticking with that model, she may be out of luck on the AirTag front since neither Elago nor Abby makes such sleeves for the first-generation Siri remote. (I’ve spotted only a few crude-looking options on Etsy and other places.) I’d be reduced to awkwardly fusing the AirTag to the Siri Remote (like this), and I don’t think my wife wants AirTag capability that badly.

Regardless, she isn’t crazy about the bulk the Elago and Abby sleeves add to what’s otherwise, for her, a pleasingly minimalist experience.

So it looks like I may have to keep doing what I’ve been doing: leaping to my feet when my wife hollers for help and rummaging around until I locate her remote. The Finder of Things never rests.