In an unusually news-packed quarterly investor call, in an unusually news-packed year, Apple CEO Tim Cook paid condolences to the late civil-rights leader and Congressman John Lewis, reiterated support for racial equity programs (see “Apple Expands Partnerships with Historically Black Colleges and Universities,” 17 July 2020) and for Apple’s goal of being completely carbon-neutral by 2030, and revealed that the next iPhone would arrive “a few weeks later” than its usual September launch. All of this on top of a surprisingly record-breaking quarter and a stock split.

Reporting on its fiscal 2020 third-quarter financial results in a year unlike any other, Apple confounded observers by announcing net profits of $11.25 billion ($2.58 per diluted share) on revenues of $59.7 billion. Many analysts had expected Apple to report a slight drop from last year’s results. The company’s revenues are up 11% compared to the year-ago quarter’s $53.8 billion, and its net results are up by 18% (see “iPhone Down, Services and Wearables Up in Apple’s Q3 2019, Apple Card to Arrive in August,” 30 July 2019). Apple also announced a four-for-one stock split to take effect on 31 August 2020.

The company saw revenue increases in all of its geographic sectors and all of its product categories. “In an uncertain environment, Apple saw a quarter of historic results,” said Apple CEO Tim Cook. 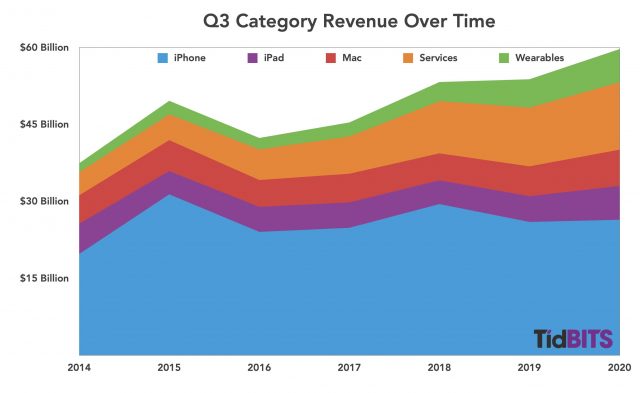 You might wonder how Apple managed to do so well when the GDP of the United States has shrunk by nearly a third and Apple was forced to close stores around the world. In short, there are a few reasons: economic stimulus plans putting more money in people’s pockets, people who are suddenly working and learning from home needing new devices, and a desire for entertainment products like Apple Music and Apple TV+. Apple also said that it is saving money with less travel and fewer meetings.

iPhone revenues inched up by 1.7% ($26.4 billion versus $25.98 billion year-over-year), aided by the popularity of the second-generation iPhone SE and the economic stimulus packages. 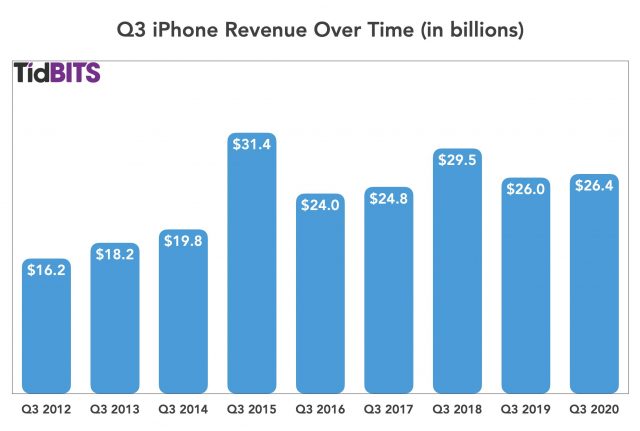 However, you shouldn’t expect a new iPhone in September this year. Apple CFO Luca Maestri said that while the iPhone 11 arrived in late September in 2019, due to supply issues, you’ll have to wait “a few weeks later” for the upcoming model. Judging by similar delay announcements in the past from Apple, this could mean anything from early October to mid-December.

iPad sales of $6.58 billion eclipsed last year’s $5 billion in revenues, representing a 31% increase year-over-year. This marks the highest third-quarter iPad revenues since 2012. Once again, the growth can be attributed both to customer demand for the recently released iPad Pro models and to business and educational demand for work-from-home and distance-learning devices in the age of COVID-19. 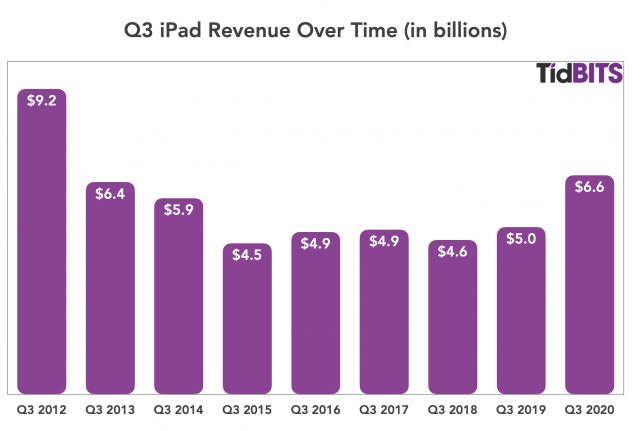 Demand for computers for students and professionals working at home drove Mac revenues to $7 billion, up nearly 22% over last year’s $5.8 billion. Also helping Apple post those stellar Mac sales were the release of a new MacBook Air in late March and a new MacBook Pro in May. Apple hit an all-time quarterly revenue record for Mac sales in Japan, and June quarter records for Mac sales in both the Americas and Greater Europe. 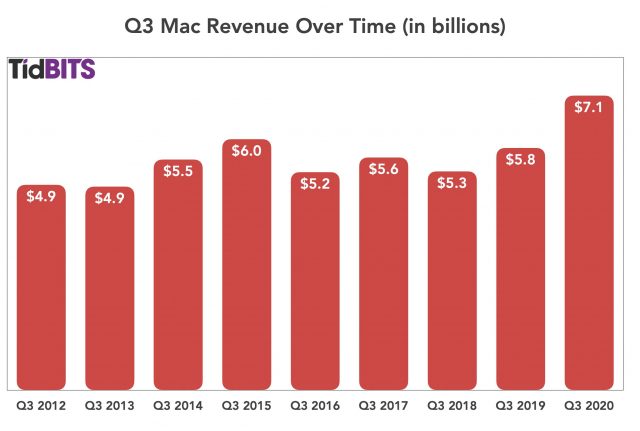 Apple had previously announced that it would ship the first Mac with Apple silicon before the end of the year, and Cook reiterated that point. When asked why Apple is switching from Intel chips in its Macs, Cook said Apple silicon “gives us interesting things we could do in products; it sort of unleashes another wave of innovation.” You can probably guess the answer when Cook was asked if Apple might consider licensing Apple silicon in the future: while he refused to rule out ever licensing the technology, he said, “We’re a product company, and we love making the whole thing because we can own the user experience in that way.”

Apple’s Wearables category achieved $6.45 billion versus last year’s $5.5 billion, an increase of nearly 17%. As impressive as those numbers sound, Cook said wearable growth had decelerated in the quarter, likely due to the COVID-19 pandemic, but still set a non-holiday revenue record for the quarter. 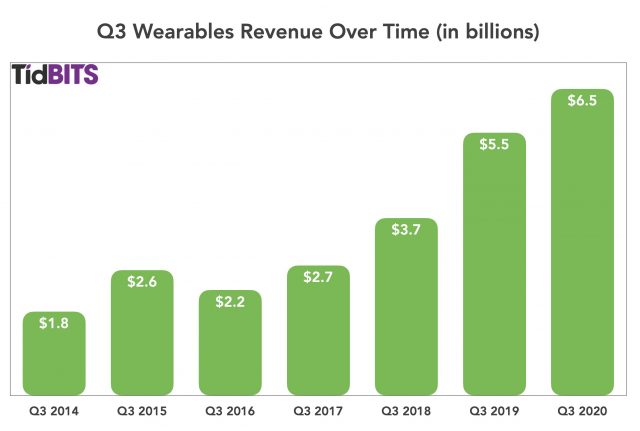 Cook attributed much of the skyrocketing growth of the Mac and iPad to stay-at-home orders, with more people working from home and engaging in remote learning and homeschooling, but also said that the stay-at-home orders, along with Apple Store closures, likely had the opposite impact on the iPhone and Wearables, even though both still had solid quarters.

Services revenue rose almost 15% to $13.2 billion over last year’s $11.45 billion. Cook attributed that increase to record interest in entertainment services like Apple Music and Apple TV+, and he took time to brag about the streaming success of the Tom Hanks movie Greyhound and the large number of Emmy awards for which Apple TV+ programs have been nominated. And of course, you can’t forget about the Apple Card. “We’re very happy with the number of people who have an Apple Card,” Cook said, adding that he believes it’s the fastest rollout in the history of credit cards. Amazingly, Apple achieved its goal of doubling its fiscal 2016 Services revenue six months ahead of schedule. 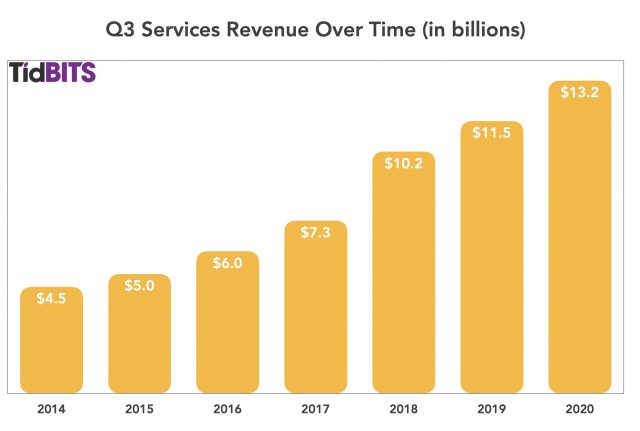 Although Apple’s quarterly results are surprisingly positive, the company still faces many challenges in the near future, with a troubled world economy and a pandemic that continues to rage largely out of control. Because of the uncertain economic climate, Apple once again declined to offer detailed guidance for the coming quarter. What hints were provided constituted a mixed bag: Cook noted that he expected the iPhone’s recent sales performance to continue, but he also pointed out that the production of new Apple TV+ shows has been delayed, with no precise date for when production might resume.

Nonetheless, Apple’s performance in the current economic climate has been breathtaking, and its ability to adjust quickly to changing circumstances has been remarkable. Next quarter’s financial results are anybody’s guess at the moment, but we would not be surprised to find the legendary fruit company once again managing to make delicious lemonade out of this year’s record crop of lemons.

Comments About Apple Q3 2020 Breaks Records While the World Burns, Next iPhone to Be Fashionably Late