The Chipolo ONE Spot has become the first shipping third-party tracking device that uses Apple’s Find My network. The Find My network relays a compatible device’s regularly refreshed encrypted ID via Bluetooth through every nearby iPhone, iPad, and Mac that hasn’t opted out. These relays add location data, enabling a tracker’s owner to find a device with a pinpointed location, just like Apple’s own tracker, the AirTag. (See “Apple’s AirTag Promises to Help You Find Your Keys,” 20 April 2021.)

The ONE Spot works nearly identically to the AirTag; it even costs about the same. Apple offers AirTags with free shipping at $29 for one and $99 for a four-pack; engraving is optional and free. The Chipolo ONE Spot costs $28 for one and currently $90 for a four-pack; shipping is free for an order of $50 or more.

Because of Apple’s rules regarding participation in the Find My network, the same anti-tracking strategies apply to Chipolo’s products as to Apple’s: 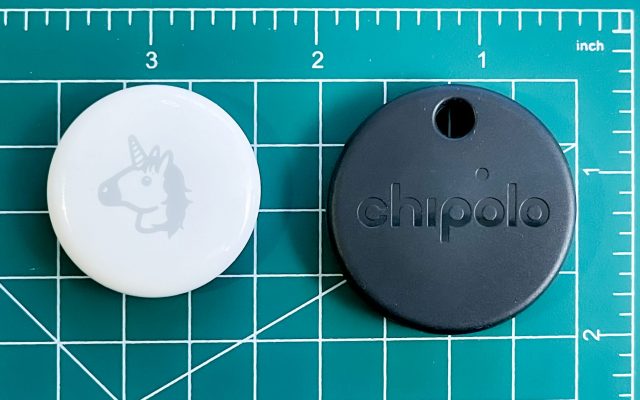 As similar as the ONE Spot is to the AirTag, there are a few significant differences:

Beyond those differences, the ONE Spot also channels Henry Ford, letting you pick whatever color you want, as long as it’s black. Oddly, Chipolo’s non-Find My devices come in a few different colors.

Why buy a ONE Spot over an AirTag? If you’d prefer to buy non-Apple gear, want a built-in key-ring hole, or want a tracker that produces a truly astonishing sound when marked as lost, the ONE Spot is your device.

Comments About Chipolo Ahoy! The ONE Spot Find My Network Tracker Arrives