New AirPods had been rumored for Apple’s “Unleashed” event, and that’s exactly what happened. But Apple expanded this initial portion of its presentation to focus more broadly on music, adding minor HomePod mini and Apple Music announcements.

After releasing the AirPods Pro earbuds in October 2019 and the AirPods Max headphones in December 2020, Apple has turned its attention back to its humble, if insanely popular, AirPods, which last got an update in March 2019.

For the third-generation AirPods, Apple borrowed from the AirPods Pro design language. The new AirPods have shorter mic stalks and reshaped one-size-fits-all earpieces meant to be more comfortable than previous models. Their battery case is thus wider than the previous AirPods cases and similar to the AirPods Pro case.

The third-generation AirPods aren’t designed to accommodate silicone tips for ear canal sealing, like the AirPods Pro. However, ear tip providers are certain to find workarounds, as they have for the previous two AirPods generations. 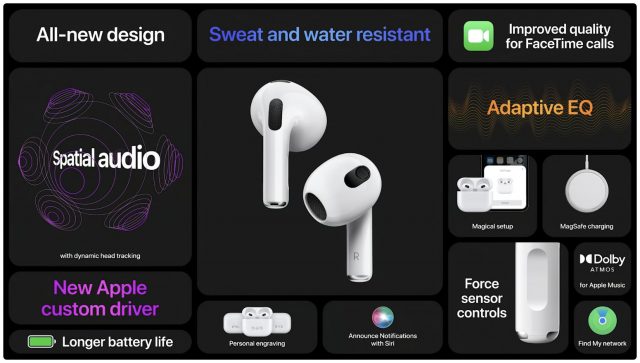 These new AirPods incorporate a host of enhancements, some until now exclusive to higher-end AirPods models:

The third-generation AirPods offer up to 6 hours of listening time on a single charge and up to 30 hours of total listening time with four recharges from the battery case. Five minutes of charging time yields an hour of listening time. These specs exceed those of both the AirPods Pro and the second-generation AirPods; get details in a chart I made in July to go with an audio-related article (see “The Ultimate Guide to Choosing Apple/Beats Audio Gear,” 19 July 2021).

Notable omissions in the third-generation AirPods are active noise cancellation and its related transparency mode, which seemingly remain reserved for the AirPods Pro and AirPods Max. That’s perhaps not surprising, given that they don’t fit into the ear canal or cover the entire ear.

The third-generation AirPods are priced at $179, with orders starting today in the United States and 26 other countries and regions. They’ll ship and be available in stores on 26 October 2021. The second-generation AirPods will remain available for $129, down from $159. An optional Qi-compatible charging case for the older AirPods remains a $79 separate purchase. 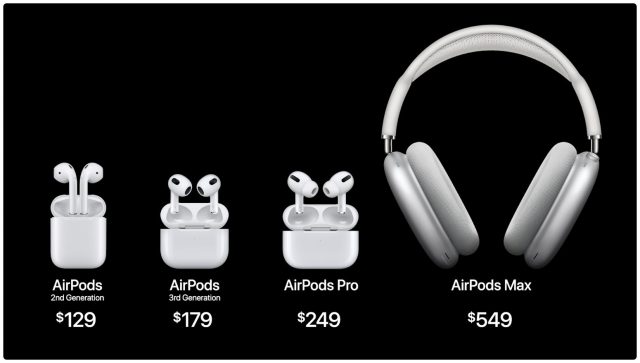 Apple’s 4-inch HomePod mini speaker, the sibling to the larger and now-discontinued HomePod, was released in October 2020. Apple has now announced cosmetic enhancements.

The HomePod mini is now available in new and livelier colors—yellow, orange, and blue—to complement the original white and black (or space gray) options. This addition brings the HomePod mini in line with rival products, such as Amazon’s Echo Dot and Google’s Nest mini, which are available in multiple colors. 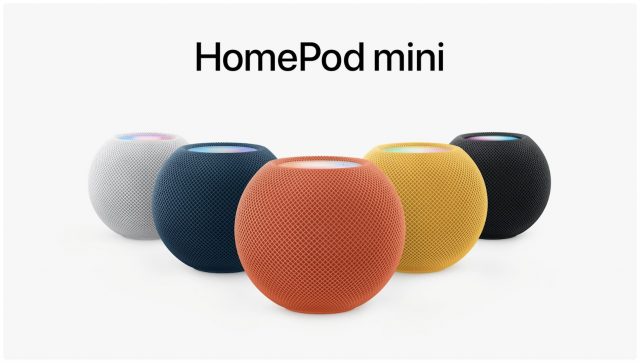 The HomePod mini remains priced at $99, with the new colors becoming available in November.

In a related and curious HomePod-related twist, Apple appears to have purged its site of any mention of its original and now-defunct speaker.

For those who often use the Siri voice assistant, Apple has built an Apple Music subscription tier accessible solely via spoken commands on Macs, iOS devices, and the HomePod mini, or when using CarPlay. It’s aimed at HomePod mini users who want an inexpensive alternative for a streaming music service. Nevertheless, it still provides access to the Apple Music catalog of 90 million songs, plus its playlists library, genre stations, and radio offerings.

Even though the Apple Music Voice Plan nominally works only via voice commands, users can still use the Music app. Apple says users will get a simplified app interface with suggestions based on their music preferences and a queue of music recently played via Siri. An app section called “Just Ask Siri” gives users tips on addressing the voice assistant for Apple Music use. Subscribers cannot download music to their libraries.

For access to Apple Music’s premium offerings, including full app access along with spatial audio, lossless audio, lyrics, music videos, and more, subscribers can switch to Apple Music’s Individual plan for $9.99 per month or its Family plan with up to six users for $14.99 per month. 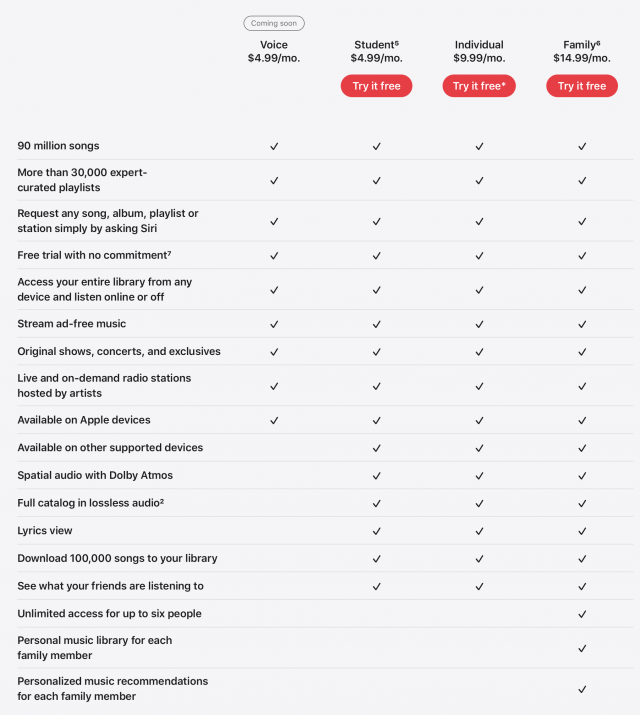 Apple Music itself is getting minor improvements. Users will find hundreds of new mood and activity playlists that, Apple claims, “are fully optimized just for voice.” It’s hard to imagine these playlists being appropriate for a broad swath of users with radically different tastes in music.

Frankly, we found Apple’s highly abbreviated announcement of the Voice Plan difficult to parse and hard to understand, though more may become clear once it ships and can easily be compared to the existing plans. It may primarily be a way that Apple can introduce a less-expensive Apple Music plan to attract subscribers who may otherwise be happy with ad-supported listening on Spotify or YouTube.